Background: Tinea incognito is a dermatophytic infection with a clinical presentation that is modified due to previous treatment with topical or systemic steroids, as well as topical immunomodulators. It tends to mimic other dermatological conditions.
Aims: To evaluate the various clinical manifestations, sites, predisposing factors and causative agents of tinea incognito.
Methods: A prospective observational study was done on one hundred clinically suspected cases of tinea incognito, with a history of topical or systemic steroid use for a period of at least six weeks. They were subject to direct microscopy and fungal culture, and re-evaluated at the end of the third and sixth week.
Results: Eczema-like conditions were the most common clinical manifestation, followed by inflammatory, autoimmune and infective conditions. The face was the most commonly affected site. Direct microscopy was positive in 85% of cases, and fungal culture was positive in 63% of cases. Trichophyton rubrum was the most common species isolated. Pharmacists were responsible for 78% of tinea incognito cases, and betamethasone dipropionate was the most common drug used.
Limitations: As this was a hospital outpatient-based study, cases with severe systemic problems could have attended other departments. Cases involving the hair and nails were negligible.
Conclusions: Tinea incognito is a commonly encountered, yet poorly reported entity in the study population. An increased level of awareness and vigilance on the sale of steroid containing compounds will help control this dermatological condition.
Keywords: Steroid, tinea incognito, Trichophyton rubrum

The term tinea incognito was originally described in 1968 by Ive and Marks, for the atypical clinical presentation of dermatophytic infections caused by prior use of topical or systemic steroids.[1] This term also includes modified cases of dermatophytosis following the use of other immunomodulators such as topical calcineurin inhibitors. According to Atzori et al., clinical atypia is not a mere consequence of corticosteroid therapy, but present from the very onset of the illness. It could be due to variable dermatophyte invasive capacity, the site of invasion, physiology of the individual, and acquired factors such as excessive washing or sun exposure. They have suggested the term “tinea atypica” rather than “tinea incognito”, to include all forms of dermatophytosis that do not present with the classic features of primary or secondary pathology.[2]

Dermatophytes metabolize dead keratin and evoke an eczematous response. This response leads to a poor supply of keratin to the fungus, thereby limiting the infection. Immunosuppressants such as steroids suppress this protective eczematous response, enhancing fungal growth.[1] Clinically, these lesions have a less raised margin, and are not as scaly as classic dermatophytosis. They tend to be extensive, pruritic, erythematous and pustular, and may mimic other skin diseases.[3] Dermatophytosis has a very high prevalence in this part of the country, due to the hot and humid climate. Pharmacists often dispense medicines without a prescription; therefore many patients first receive treatment from them, non-dermatologists, friends or relatives.

Authors from European and Asian countries have shared their experiences with tinea incognito. However, this entity has been rarely reported from our part of the country.[4] We attempt to assess its various clinical manifestations, the most common sites and clinical patterns, causative agents and predisposing factors. The efficacy of laboratory methods in confirming clinical diagnosis and species identification has also been assessed, carried out at a tertiary care hospital in Northeast India.

This prospective observational study was carried out on patients attending the dermatology and venereology outpatient department, in collaboration with the department of microbiology, at Fakhruddin Ali Ahmed Medical College and Hospital, Barpeta. The approval of the institutional ethical committee was taken. A hundred cases of clinically suspected tinea incognito were consecutively selected across all ages and both genders, after taking informed consent. A minimum duration of a six-week application of topical steroid (alone or in combination with other drugs) was a prerequisite for inclusion. A detailed history regarding the duration of topical or systemic medication usage, source and reason for using it, response to previously prescribed medications, relapses and remissions were taken and recorded in a proforma. Samples of skin scrapings, nail clippings and infected hair were collected from the patient and subjected to 10% potassium hydroxide mount and fungal culture. Positive cultures were identified by studying colony characteristics, pigment production and microscopic examination in lactophenol cotton blue preparation. Special tests such as hair perforation test, urease production and slide culture were performed using standard techniques whenever necessary.

Clinically suspicious cases with positive mycological findings were included at first visit. Clinically suspicious cases with negative mycological findings were included only after a positive response to topical antifungal agents. All included cases were reviewed at the end of three and six weeks, during which the fungal growth and therapeutic response was ascertained.

The total of hundred patients were enrolled in the study, out of which 54 were men, and the rest were women, with a male to female ratio of 1.17:1. The mean age of the patients was 28.47 ± 15.22 years. A slight female preponderance was noticed in the 11–20 years and 31–40 years age groups. Most of the patients were from a rural background, as the catchment area of the hospital comprises mostly of a rural population.

The face was the most common site of presentation, with 51 cases. Further examination revealed tinea incognito lesions or typical dermatophytic lesions in other sites as well. Seventy patients had two or more areas involved. Tinea faciei and tinea corporis were seen in 24 cases, whereas tinea corporis and tinea cruris were seen in 22 cases. Thirteen cases presented with tinea faciei in combination with tinea corporis and tinea cruris. The duration of steroid application varied from six weeks to twelve years. Pharmacists were responsible for prescribing medications in the majority of cases (78%). Eight patients were using medicines on their own, or advised by family and friends. A triple combination of corticosteroid (flucinolone acetonide), antifungal and antibacterial cream was the most common drug being used, mostly preferred by pharmacists. The other triple combinations contained betamethasone dipropionate and clobetasol propionate. Pharmacists also had a tendency to co-prescribe topical preparations such as dithranol, ichthammol and menthol, causing significant changes in the pattern of infection. A few patients who self medicated used plain corticosteroids. None of the patients had used topical tacrolimus or pimecrolimus.

Patients were either using the drug at irregular intervals, or had stopped using it before coming to the hospital. Direct microscopy was positive in 85 cases. Culture positivity was obtained from 63 cases, and Trichophyton was the most common species isolated, comprising sixty cases. Trichophyton rubrum was isolated in 35 cases, Trichophyton mentagrophytes in 22 cases [Figure - 1] and [Figure - 2] and Trichophyton tonsurans in three cases. The remaining three cases comprised of Epidermophyton floccosum (2 cases) and Microsporum canis(1 case). All cases showed clearance of lesions at six weeks follow-up after a course of topical and systemic antifungal drugs.

Total number of cases for each type of clinical presentation with their site of distribution, direct microscopy results and fungal culture positivity are elaborated in [Table - 1]. 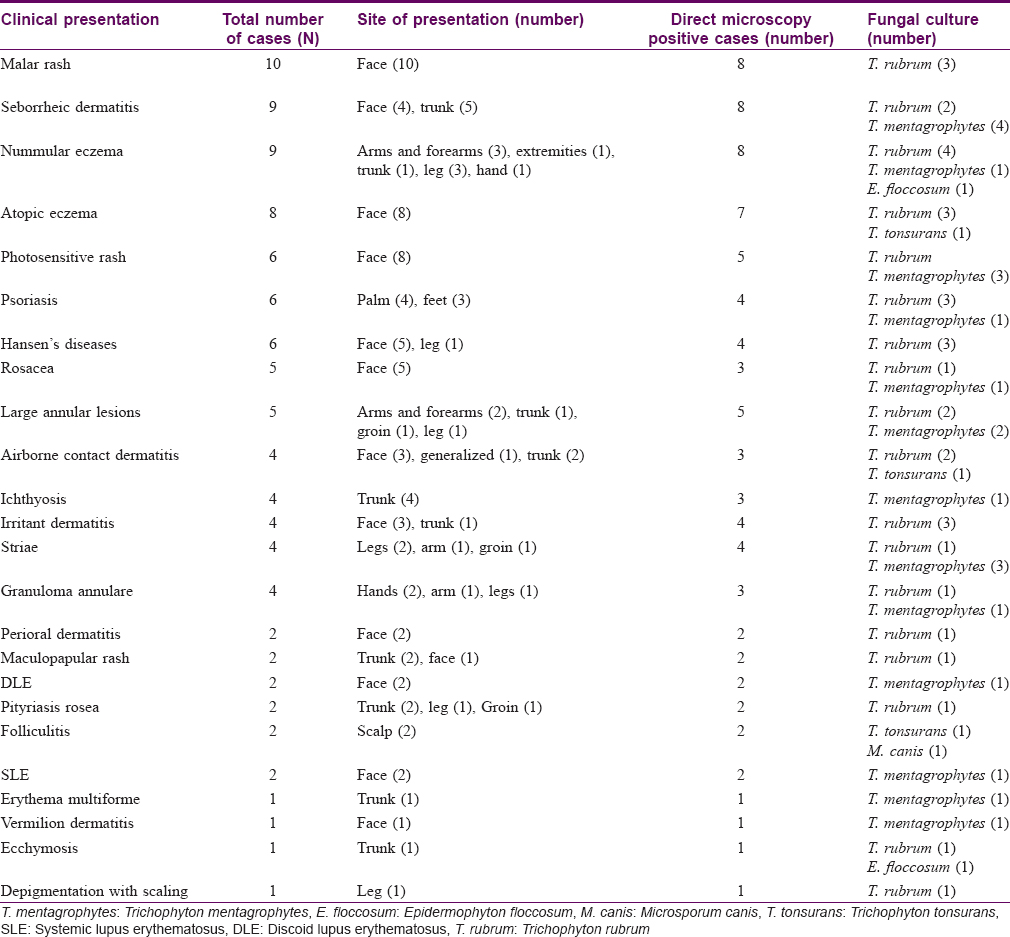 Table 1: Total number of cases for each type of clinical presentation with their site of distribution, direct microscopy results and fungal culture positivity

Our hospital caters to a large group of patients coming from a rural background. The tropical climate in this part of the country favours the growth of fungi, and dermatophytosis is common. Patients usually visit a dermatologist late, once the lesions become atypical and chronic. The female preponderance in our study is possibly because the face was most commonly affected, which would prompt them to seek medical attention immediately. In other studies, the trunk was reported to be the most common site affected, ranging from 30.4% to 46.3% (43% in our study). The face was the next common site, ranging from 24.4% to 38.9% (51% in our study).[4],[5],[6],[7] In studies on dermatophytosis, the most common clinical subtype was tinea corporis, followed by tinea cruris and tinea unguium. Tinea faciei was either not reported, or were very few, showing that tinea faciei has a higher incidence in tinea incognito compared to dermatophytosis.[8],[9],[10]

A high rate of positivity with direct microscopic examination has been observed in previous studies, similarly seen in our study.[5],[6],[11] The rate of culture positivity has also been in line with previous studies.[4] A few other studies have reported much higher positivity rates of 85.2% and 90.5%.[6],[11] Studies have shown that Trichophyton rubrum was the most commonly isolated fungus, followed by Trichophyton mentagrophytes.[4],[5],[11],[12]Trichophyton rubrum was the most common fungus isolated even in classic dermatophytosis, which shows that the pattern of distribution of dermatophytes is not influenced by atypicality of lesions and site.[8],[9] We did not observe the growth of subspecies such as T.verrucosum, T.schonleini and T.erinacei, as observed by other authors.[5],[7] A few other studies found T. mentagrophytes (44.4%) and Trichophyton verrucosum (33%) to be the most frequently isolated species.[6],[7] The Trichophyton group was the most frequently isolated genera in almost all studies, except for one, in which Microsporum canis was the most common fungus isolated.[2]

A large majority of patients (78%) in our study had been treated by pharmacists. Ansar et al. found that 64.3% of their patients were treated at home by themselves, friends or family, 21.4% by general physicians, and 14.3% by dermatologists. In another study from Korea, 40.6% of tinea incognito patients had received prior treatment from a dermatologist, 43.8% from non-dermatologists and another 15.5% were self-medicated.[5],[7] The self-medicated patients used only topical steroids, whereas people treated by dermatologists or non-dermatologists used various treatment modalities such as topical/systemic steroids, topical/systemic antibiotics, topical calcineurin inhibitors, intralesional steroid injections, or a combination of those drugs. Contrary to previous studies, our study did not record any case that was misdiagnosed by a dermatologist, and very few cases were treated by non-dermatologists. We did not come across any case of topical calcineurin inhibitor induced tinea incognito, probably because of its higher cost and slow onset of therapeutic effect. In a study from Korea, the most common clinical manifestations were eczema-like, psoriasis-like and lupus erythematosus-like lesions.[5] Eczema and rosacea were the most common differentials in another study.[7] Dermatophytic infections mimicking other dermatoses are not only due to steroid use, but could also be due to other physiological conditions. Impetigo, eczematous dermatitis, lupus erythematosus, polymorphous light eruption, psoriasis and rosacea are other differentials.[2]

Although this entity was described almost fifty years ago, it is still a cause of diagnostic dilemma and therapeutic concern. Dermatologists invariably have to manage a patient of tinea incognito in daily practice. Medications given by pharmacists are usually well known to people and give prompt relief, hence preferred by patients. Steroid antifungal combination drugs are easily available, affordable and have a long list of misleading indications written in Hindi [Figure - 8]. The wide range of dermatoses that dermatophytosis can mimic is a threat to clinical diagnosis. The high success rate yielded by simple diagnostic tests should make it easier to diagnose and treat. It is heartening to note that there were no cases of tinea incognito caused by a dermatologist.

One needs to reach out to areas where ignorance prevails, and educate regarding the dangers of steroid abuse, which change simple and curable infective conditions into chronic and persistent dermatological conditions. An initiative needs to be taken at the state and central level by dermatological associations. It is high time that stringent and legal measures are imposed against the liberal sale of such drugs which act as a double-edged sword, becoming a bane rather than a boon.