Clinicoepidemiologic features of chronic urticaria in patients having positive versus negative autologous serum skin test: A study of 100 Indian patients

Background: Chronic urticaria patients who demonstrate autoantibodies against the high-affinity receptor of IgE (FceRI) or IgE itself tend to have a high itch and wheal score, and systemic symptoms may have a significant bearing on their management in terms of super pharmacologic doses of antihistamines needed or use of immunomodulators. Most studies have used histamine release assays rather than autologous serum skin tests (ASSTs) for correlating urticaria severity and histamine releasing activity. Methods: An ASST was performed in 100 (M:F, 31:69) chronic urticaria patients aged between 14 and 63 (mean, 32.69 ± 13) years with an objective to study the clinicoepidemiologic features like age, sex, age of onset and duration, frequency and distribution of wheals, urticaria severity, angioedema and systemic manifestations in ASST-positive and ASST-negative patients. Results: ASST was positive in 46% of the patients and negative in 54% of the patients, respectively. Both groups showed no statistically significant difference for epidemiological details. However, the ASST-positive patients had a higher mean urticaria activity score, frequent involvement of more body sites, particularly palms and soles, presence of throat angioedema and general constitutional, respiratory or gastrointestinal symptoms in comparison with the ASST-negative patients. Conclusions: Apparently, ASST-positive patients have more severe clinical manifestations of chronic urticaria. The knowledge will be useful for the treating dermatologists and patients alike in view of its therapeutic implications.
Keywords: Urticaria, angioedema, anti-IgE autoantibodies, autologous serum skin test

About 50% of the chronic urticaria patients who demonstrate IgG autoantibodies directed against epitopes expressed on a- chain of the high-affinity receptor of IgE (FceRI) or IgE itself, often termed as autoimmune urticaria cases, tend to have a high itch and wheal score, systemic symptoms and other associated autoimmune diseases. [1],[2] Most studies have used histamine release assays rather than autologous serum skin test (ASST) for correlating urticaria severity and histamine releasing activity. The ASST has a sensitivity of 70% and a specificity of 80% for in vitro basophil histamine release when the serum response is at least 1.5 mm greater than the control saline skin test at 30 min. [3],[4] Thus, despite health and safety concerns, it can reasonably be employed as a predictive clinical test to diagnose clinically suspected cases of autoimmune urticaria or at least a subgroup of chronic urticaria patients who are more likely to have an endogenous cause for their disease. [5] We performed ASST in chronic urticaria patients with an objective to study the clinicoepidemiologic features in patients with positive or negative ASST. The knowledge will be useful for the dermatologists and patients alike as this has a significant bearing on the long-term management of these patients in terms of need to use super pharmacologic doses of antihistamines or immunomodulators, their use may not be justifiable otherwise on the basis of signs and symptoms of urticaria alone.

One hundred consecutive patients (excluding pregnant/lactating females and children aged ≤12 years) of chronic urticaria (defined as recurrent urticaria occurring at least twice a week for a minimum of 6 weeks) attending the Outpatient Dermatology Department were enrolled between August 2007 and July 2008 for ASST. Patients having acute urticaria, urticarial vasculitis, physical urticaria (diagnosed on the basis of history/provocation tests) or other systemic diseases known to cause urticaria were also excluded. An ASST was performed after the patients were off antihistamines for 3 days (7 days for long-acting antihistamines and 2 weeks for doxepin), corticosteroids or immunosuppressive agents (for 6 weeks to 3 months) as per the procedure described previously. [3],[4],[5] The test was not performed over the areas involved by wheals in the last 24 h. The ASST was considered positive when the average diameter of the autologous serum-induced wheal was >1.5 mm of the saline-induced wheal and the redness of the autologous serum-induced wheal matched that of the histamine-induced wheal [Figure - 1]. Age, sex, age of onset, duration, frequency of episodes, number and distribution of individual urticarial wheals or angioedema and systemic manifestations recorded at enrollment were analyzed in relation to the ASST results. Symptoms and signs were graded on the basis of the modified urticaria activity score [Table - 1]. [6] The Chi Square and Fischer′s exact tests were used for categorical variables and the Mann-Whitney non-parametric test was used for the other variables that were not distributed normally. P <0.05, calculated at the 5% level (95% confidence limit), was considered to be statistically significant. 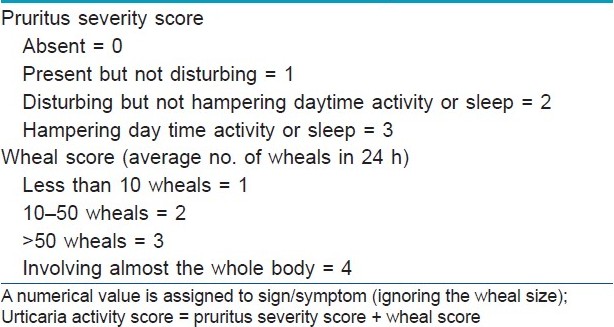 The study has not determined how many patients in particular groups showed symptoms associated with the hypersensitivity to pseudoallergens that might be the case in a few of these patients. We also did not determine the concurrent presence of Hashimoto′s disease or anti-thyroid antibodies, which may contribute to intensification of the symptoms in some ASST-positive cases. Although prolonged symptoms were highly disturbing, assessment for their psychosocial impact or therapeutic outcome in both the groups was not in the scope this work. Last but not the least, ASST itself has its own limitations.

Dr. Anjali Mahajan from Community Medicine, Indira Gandhi Medical College, Shimla (Himachal Pradesh), India, helped in statistical analysis of the data. Her erudite association throughout the study is gratefully acknowledged. The authors would also like to thank their patients who volunteered for the study.