In recent years, laser-based therapies have been steadily gaining in popularity as a useful intervention for skin rejuvenation due to their faster healing time, greater patient compliance and fewer potential complications.[1] Currently, the ablative class of lasers result in some degree of thermal damage in the dermis which results in dermal collagen changes and may lead to post-procedure complications like oozing, bleeding or infections. Besides, post-inflammatory pigmentation is also a potential complication, especially in Asian skin.[2] Hence, non-ablative lasers are preferred over the ablative ones for skin rejuvenation. The 532-/1064-nm Q-switched NdYAG laser has gained much attention in the treatment of hyperpigmentation. It has been also found to be effective in the treatment of rhytides, atrophic acne scars and refractory dermal melasma.[3],[4],[5],[6],[7],[8],[9] The mechanism of clinical improvement is proposed to be its ability to induce controlled dermal injury followed by a healing response and subsequent neocollagenesis.[10] It has also been postulated that the 532-/1064-nm Q-switched NdYAG laser can cause melanin granule dispersion and fragmentation without causing cellular destruction, using a sub-photothermolytic fluence.[11],[12] However, there are still reports of post-inflammatory hyperpigmentation occurring frequently following Q-switched NdYAG laser therapy and hence, further steps are required to minimize the incidence of this complication.[13],[14],[15],[16] This becomes especially important in Asian skin which is usually Fitzpatrick skin type IV and has a higher melanin content, where post-inflammatory hyperpigmentation is encountered more commonly following laser procedures.[17],[18]

Vitamin C is a popular component of many whitening and anti-ageing treatment regimens. It has the ability to inhibit melanogenesis (enzymatic conversion of tyrosine into melanin pigments) and also has an anti-oxidant effect and promotes collagen synthesis.[19],[20],[21],[22]

Sonophoresis is the method by which the energy of ultrasound waves is used to drive molecules into and across the skin. The acoustic cavitation generated by ultrasound waves and the subsequent collapse of these microbubbles on the surface of skin (stratum corneum) lead to increased skin permeability and is thought to play an essential role in ultrasound-assisted delivery.[23] Ultrasound-mediated transdermal drug delivery also has the dual advantage of being less invasive and less painful when compared to traditional drug injections.

It was postulated that vitamin C, with its inhibitory action on melanogenesis, may be a good agent to tackle post-inflammatory hyperpigmentation following laser skin rejuvenation and the delivery of vitamin C by sonophoresis may enhance treatment efficacy by increasing the permeability and absorption into the skin.[24],[25] Also, there have been reports of the effectiveness of vitamin C application immediately after NdYAG laser in preventing the side effects of the laser regimen. In this study, we have retrospectively reviewed the general outcome and incidence of post-inflammatory hyperpigmentation and other side effects in patients who received vitamin C sonophoresis immediately after five sessions of NdYAG laser treatment.

This retrospective study was approved by the Institutional Review Board Ethical Committee (Chang Gung Memorial Hospital Ethics Committee No. 101-2546B). We reviewed the clinical records of patients who underwent treatment with NdYAG laser therapy followed by transdermal delivery of vitamin C by sonophoresis in our aesthetic medicine center from October 2011 to December 2013. All patients were adults and had Fitzpatrick skin type IV. The patients who had no active skin lesions on the treatment area, no underlying skin disease and those who were not pregnant or lactating, were included in the study. Patients with a history of photosensitivity, abnormal scarring, poor wound healing, intake of oral contraceptive pills and hormone replacement therapy in the preceding one month were excluded. The underlying pigmentary disorder was classified as either dyschromia or melasma. Wood's lamp examination was used to determine the type of melasma.

Data was analyzed using the SPSS Statistics (version 19; IBM, Armonk, NY, USA) software. The objective and subjective outcomes of the two groups (dyschromia and melasma) were compared using Mann–Whitney U-test. Chi-square test and Fisher's exact test were used to compare post-inflammatory hyperpigmentation and other side effects between the two groups, as the expected count was <5 in some cells. P < 0.05 was considered significant.

A total of 23 Chinese women between the ages of 20 and 62 (mean age 38.6, standard deviation 10.4) were enrolled in the study. Eleven (47.8%) patients had dyschromia and twelve (52.2%) patients had mixed melasma [Table - 1]. Four patients had been previously treated by other lasers (ruby or erbium: yttrium aluminum garnet laser) with poor response. None of them had received any treatment in the 6 months preceding treatment with the NdYAG laser. All patients, except one who developed extreme post-inflammatory hyperpigmentation, underwent five sessions of NdYAG laser treatment and subsequent vitamin C sonophoresis. 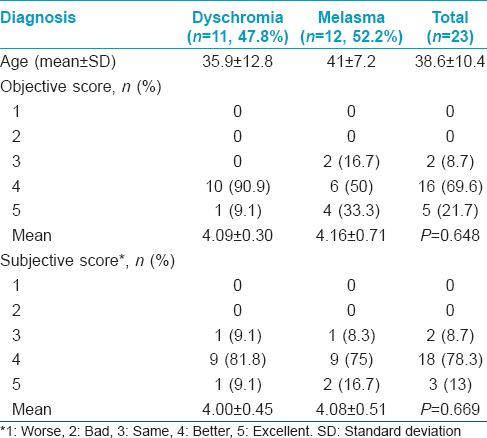 Table 1: The assessments of objective and subjective score after five sessions of treatment 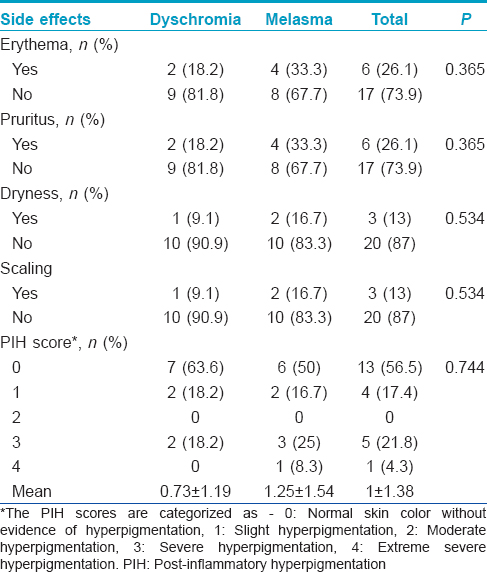 Table 2: Post-inflammatory hyperpigmentation and other side effects for dyschromia and melasma

The incidence of post-inflammatory hyperpigmentation following 1064-nm Q-switched NdYAG laser treatment is common in Asians ranging from 18% to 73% of the treated cases in various studies.[26],[27] The sublethal destruction or stimulation of hyperactive melanocytes during laser treatment may further increase melanin production, resulting in hyperpigmentation.[28] The 532-/1064-nm wavelength of Q-switched NdYAG laser is well-absorbed by melanosomes and pigmented cells.[29] This absorption has been shown to cause dermal and epidermal melanosome rupture, melanosome rupture in melanocytes and destruction of dermal melanophages at the appropriate threshold.[30],[31] Therefore, multiple subthreshold exposures to the 532-/1064-nm wavelength may stimulate melanogenesis in some areas and produce rebound hyperpigmentation, as was previously noted in the guinea pig model.[27],[31] Therefore, preoperative counseling, individualized treatment protocols and post-procedure care to reduce the incidence of post-laser adverse reactions are of paramount importance.

Previous studies have shown the benefits of vitamin C on wound healing, photoaging, skin discoloration and acne.[19], 20, [32],[33],[34] However, as the active form of vitamin C, L-ascorbic acid, is present as a hydrophilic, water-soluble molecule in most biological models, finding an efficient way to deliver vitamin C transdermally in high concentrations is important. Some studies demonstrated that only about 12.4% of ascorbic acid traverses the stratum corneum barrier in 72 h.[35] Taylor et al. has described a full-face iontophoresis mask of vitamin C as an effective short term treatment for melasma and post-inflammatory hyperpigmentation.[36] Other reports have mentioned the topical use of vitamin C for post-inflammatory hyperpigmentation following laser therapy, but time taken for complete resolution was 3-4 months.[37],[38] Even administration of intravenous vitamin C was proposed as a beneficial alternative for the treatment of post-inflammatory hyperpigmentation; however, a prolonged course of 18 months was needed.[39]

Stratum corneum being the outer skin layer that forms the rate-controlling diffusion barrier for most compounds, removal of this layer will increase the permeability of the skin to hydrophilic drugs. This is the reason why we chose to deliver vitamin C by sonophoresis immediately after the laser. There is increased absorption of vitamin C in high concentrations as there is a reversible destruction of the skin barrier by the laser.

Recently, Lee et al. has also reported a marked improvement in outcome with the combination of vitamin C sonophoresis immediately after laser therapy in eight melasma patients in a split-face study and proposed the benefits of the combination in the treatment for melasma.[41] Even though the scoring scale used was different when compared to this study, a larger proportion of our patients experienced a >50% improvement. In our study, 92% (21/23) of the patients, irrespective of the groups, had felt that the lesions showed >50% improvement and only 8% (2/23) felt no difference. This may be attributed to the increased number of patients and laser sessions in our study. Furthermore, our study also showed that the outcome is long-lasting (only 21.7% of the patients had recurrence of mild pigmentation on the treated areas). This is notable in comparison to the results of the study by Wattanakrai et al., where only 1064-nm NdYAG laser was used to treat melasma in Asian patients. All the patients had recurrence at 12 weeks of follow-up, even though >50% improvement was achieved in 90.9% (20/22) patients post-treatment.[27]

Besides the good clinical outcome, this combination is also easy to administer. Administration of vitamin C by a trained therapist takes only 12 min and the need for other adjunctive topical agents is eliminated. Therefore, complications due to inadequate compliance with the post-laser care can also be reduced. The only post-laser care required as per our protocol was regular use of broad spectrum sunscreens.

The excellent clinical outcome in resolution of pigmentation when compared to other studies may be attributed to the synergic effect of vitamin C with laser treatment and also the appropriate time of administering vitamin C. Vitamin C was administered immediately after laser therapy (not before), when the pores were just opened by the thermal effect of laser and the thermal damage to the skin barrier caused increased absorption of vitamin C. Also, the increased blood circulation in the dermis due to the heating caused by the laser results in enhanced penetration of vitamin C by sonophoresis.[41] When compared to other methods, we believe that our method can provide high concentrations with a short time interval for onset of action and is a better alternative because of its safety, effectiveness and ease of administration.[36],[37],[38],[39]

There were limitations in this study. This was a retrospective cohort study without a control group, having the inherent limitations of this study design. A prospective randomized controlled study design to prove the specific effect of vitamin C sonophoresis would have provided a stronger level of evidence; however, it was difficult to recruit a control group due to the individual differences in patients' facial characteristics.[41]