A population-based study has found the overall prevalence of acquired bilateral nevus of Ota-like macules to be 2.5% in Chinese people. The authors also noted that this condition was more common in women. [6],[7] More than 90% of the cases in that study were female and the majority of those affected were aged 45-55 years (median- 46 years). [6] The condition was less common in very young (<25 years) and very old (>75 years) women. Few reports have characterized the condition in men.

The aim of our present study was to characterize the clinical and histopathological features of acquired bilateral nevus of Ota-like macules in men and examine the differences between this condition in men and women.

This study was conducted in accordance with the Declaration of Helsinki principles and was approved by the Institutional Review Board of the Asan Medical Center.

The study cohort comprised 11 men and 62 women, all with a clinical diagnosis of acquired bilateral nevus of Ota-like macules. Both men and women were examined at the Dermatology Outpatient Clinic at the Asan Medical Center from December 2000 to April 2013. The diagnosis was made on the basis of the characteristic brown/blue color and symmetrical distribution of the lesions. All cases were diagnosed by dermatologists through examination and history taking, which included both family and drug histories. The site and color of all lesions in the study cohorts were estimated. The color of the lesions was categorized as brown, slate-gray or blue. All patients were examined for the presence of other pigmentary disorders, including facial nevomelanocytic nevi, facial seborrheic keratosis, melasma and extra-facial acquired dermal melanocytosis. Biopsy specimens were taken from lesions in 5 men and 10 women. Melanin was visualized using the Fontana-Masson stain, and melanocytes were detected using the Melan A stain. The number of melanocytes as well as the amount of melanin pigment per unit area in the epidermis and dermis was evaluated using image analysis software (Image J; National Institutes of Health, Bethesda, MD). Image analysis was performed at a constant magnification (original magnification ×100). The dermal depth at which the melanocytes occurred was assessed by measuring the distance from the top of the granular layer to the deepest dermal melanocytes using a scale mounted in the eyepiece of the microscope.

All statistical analyses were performed using SPSS, version 18.0 (SPSS Inc., Chicago, IL). Fisher′s exact test was used to examine differences in affected sites between men and women. Differences in the occurrence of concurrent extra-facial acquired dermal melanocytosis between men and women were examined using the Fisher′s exact test. A linear-by-linear association test was performed to analyze differences in the color of the lesions between the two groups. The Student′s t-test was used to analyze differences in age at first presentation and age at onset between the two groups. Spearman′s correlation analysis was performed to determine whether age had a significant effect on lesion color. The data from the histological studies were evaluated with a Mann-Whitney U test. All P values were two sided and a value of P < 0.05 was considered statistically significant. 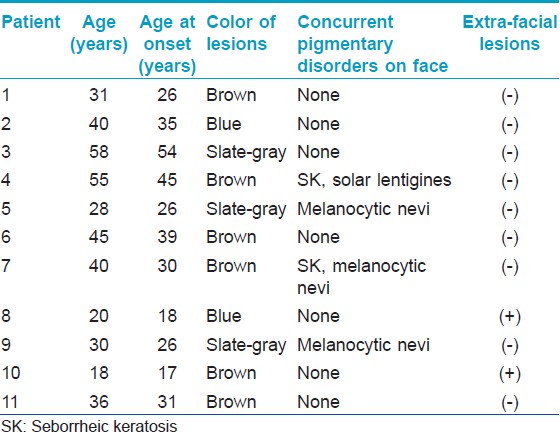 Concurrent pigment disorders of the face, such as facial nevomelanocytic nevi, solar lentigines, facial seborrhoiec keratoses, and melasma, were observed in 4 (36%) out of 11 male patients and in 23 (37%) out of 62 female patients [Table - 2]. Nevomelanocytic nevi and seborrhoiec keratoses were common concurrent disorders in men but melasma was the most common concurrent pigmentary disorder in women. There was a significant difference in the prevalence of melasma between women and men (P = 0.001). Concurrent melasma was observed in 14 (23%) out of 62 women, whereas none of the men showed evidence of melasma. Lesions of extra-facial acquired dermal melanocytosis were noted in 2 (18%) out of 11 men [Figure - 1] and in none of the 62 women. Concurrent extra-facial lesions were significantly more common in men than women (P = 0.021). 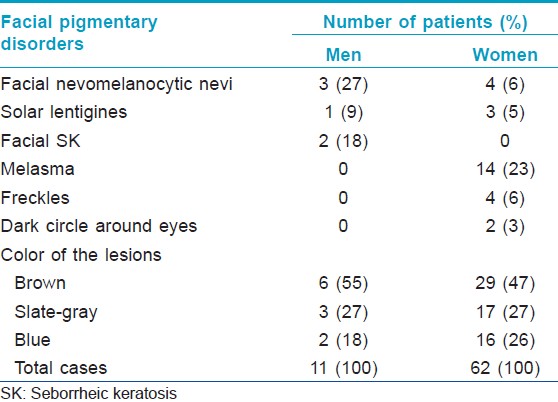 A 28-year-old man presented with pigmentary lesions on the face, both hands, feet, and back. The pigmentation on the nasal root started at the age of 3 and on the hands/feet at the age of 13. There were a number of brown macules scattered over the dorsum of hands and feet. The patient noticed discrete brown macules on the zygomatic area and forehead at the age of 25. He took no oral medications when the skin lesions were found. A diagnosis of acquired bilateral nevus of Ota-like macules with extra-facial lesions was made on the basis of clinical features and histopathological evaluation.

A 20-year-old man presented with a history of pigmentation on his face of three years duration. The patient had multiple hyperpigmented macules on the right forearm that had appeared 12 years previously. He denied any history of taking oral medication. Based on the clinical and histopathological findings, we diagnosed the facial lesion as acquired bilateral nevus of Ota-like macules and those on the right arm as extra-facial acquired dermal melanocytosis.

Distribution of the lesions

Of the 11 men, 6 had brown lesions and 2 had blue lesions [Table - 2]. There was no correlation between patient age and lesion color in men. Of the 62 women, 29 had brown lesions and 16 had blue lesions. According to Spearman′s correlation analysis, lesions tended to become bluer with age in women (correlation coefficient, r = 0.548; P < 0.001). Brown lesions were observed in 17 (77%) out of 22 patients younger than 30 years; blue macules were noted in one patient. In contrast, 9 (60%) out of 15 patients older than 40 years of age had blue lesions [Figure - 4]. There was no significant difference in lesion color between men and women (P = 0.83).

Histopathological findings were similar in men and women. Biopsies of the lesions revealed elongated, slender, pigment-bearing cells that were dispersed throughout the upper dermis. Melanocytes were interstitially dispersed between the collagen fibers of the dermis, with the long axis parallel to the collagen fibers [Figure - 5]a. They were rarely located in the perivascular area in either men or women. Histopathological findings for extra-facial lesions in men were similar to those for facial lesions [Figure - 5]b. There was no difference in the degree of epidermal pigmentation or in the number of dermal melanocytes between men and women [Table - 3]. In addition, there was no significant difference in the depth of the dermal melanocytes between men and women [mean depth (mm); 0.63 ± 0.21 in women, 0.58 ± 0.18 in men; P = 0.32].

Table 3: Quantitative analysis of melanin pigment and number of melanocytes in men and women

The pathogenesis of acquired bilateral nevus of Ota-like macules is unclear. Three mechanisms have been postulated to explain the origin of the melanocytes observed in patients with this condition: [1],[8] (1) epidermal melanocytes "drop" into the dermis; (2) hair bulb melanocytes migrate into the dermis; or (3) dermal melanocytes migrating from the neural crest during embryological development fail to reach their proper location in the basal layer of the epidermis. The mechanism of "epidermal melanocyte migration" is consistent with the fact that the color of the macules varies with the maturity of the lesion. The early-stage lesions are thought to be brown because the melanocytes are present within the basal layer of the epidermis; their subsequent migration into the dermis results in a darker bluish-gray color. [8] The finding that macules in women in the present study became progressively bluer with age is consistent with this mechanism; however, no progressive age-associated color change was noted in men.

Dermal melanocytes derived from embryological development may be latent and unnoticed at birth, but melanogenesis is activated later by an unknown event. [1] Some factors associated with the "activation of latent melanocytes" mechanism may induce the development of acquired bilateral nevus of Ota-like macules. The fact that this condition mainly affects women suggests that female sex hormones play a role. This is supported by the finding that the onset of lesions peaks after puberty and declines after menopause. [6] However, recent studies found no increase in the expression of estrogen and progesterone receptors in patients with this disorder. [9] Exposure to UV light is thought to be the most probable cause of lesions in the zygomatic area which often receives a high dose of radiation relative to other areas of the face. [1],[4]

Acquired dermal melanocytosis is a pigmentary disorder that is clinically characterized by the appearance of blue-brown macules which are most frequently observed on the face of Asian women. Extra-facial lesions are rare but can occur on the back, limbs, or extremities. [10],[11],[12],[13] It is unclear whether the extra-facial condition is a separate entity from acquired bilateral nevus of Ota-like macules. A previous study found no significant difference in the histopathological features of facial and extra-facial lesions. [11] In our study, there were no differences in the histopathological findings in extra-facial and facial lesions from two (18%) male patients who had lesions at both sites. Dermal melanocytes were distributed throughout the upper dermis in both lesions. Several reports have described acquired dermal melanocytosis that simultaneously involved the face and other body areas. [4],[5],[10],[14] In the present study, 2 (18%) out of 11 male patients also showed extra-facial pigmentation on the hands, arm, back, and feet while it was seen in none of the 62 women, a statistically significant difference. Although few reports have evaluated the development of acquired bilateral nevus of Ota-like macules in men, these patients often develop facial lesions with concurrent extra-facial lesions on the limbs, palms, fingers, and the dorsum of the hand [Table - 4]. [4],[10],[11],[15]

We further found in our current analyses that although the zygomatic area was often affected in both male and female patients, forehead lesions were significantly more common in men. Murakami et al.[10] compared the clinical features of atopic dermatitis-associated acquired bilateral nevus of Ota-like macules which were relatively common in men and frequently occurred on the forehead, with those of idiopathic lesions. Although the reasons for the observed differences in the affected sites in men and women in the present study are unclear, UV exposure and female sex hormones are strong candidates. Zygomatic lesions are more common in women than men because UV irradiation has a significant role in the development of lesions in women. The high prevalence of concurrent melasma observed in the female patients may also support this difference.

The color of the lesions in men was not different from that in women with brown lesions being the most common. In contrast to female patients, there was no tendency for the lesions to become bluer with age in male patients. We found no differences in the degree of epidermal pigmentation or in the number of melanocytes, between male and female patients. Dermal melanocytes were interstitially distributed throughout the upper dermis in both male and female acquired bilateral nevus of Ota-like macules; however, it should be noted that we only studied a small number of specimens.

In conclusion, despite the limitations of a small sample size, the results of our present study strongly suggest that the characteristics of acquired bilateral nevus of Ota-like macules in men are distinct from those of female patients. As such, this study will provide a basis for further investigations into the pathogenesis of male acquired bilateral nevus of Ota-like macules. We found that, unlike those in women, the lesions in men occurred mainly on the forehead, and the condition showed a relatively high association with extra-facial lesions. Acquired bilateral nevus of Ota-like macules in men does not appear to be a separate entity from extrafacial melanocytosis. We could not exclude the possibility that lesions in male patients may be attributed to the late appearance of congenitally formed dormant melanocytes migrating from the neural crest.