Dermatological concerns are a common cause of morbidity in rural and urban areas of developing countries and account for a high proportion of visits to healthcare centres.

The pattern of dermatoses in a particular area is determined by many factors, such as geographical location including environmental and climatic factors, socio-economic condition of the people, literacy levels, psychological, cultural and racial factors, to mention a few. [1] Most of the knowledge presently available about various aspects of dermatological diseases is based on observations made and data collected from secondary and tertiary level hospitals. [2],[3]

The patterns of dermatoses observed at tertiary level centres may not necessarily represent those at the primary healthcare level. [4] In order to evaluate dermatoses in the community and look for any difference between the patterns of dermatoses at specialized tertiary care centres and at community level primary health centres, we conducted the present study by offering dermatological services at the primary care level in block Hazratbal of Srinagar district of Kashmir valley.

Kashmir valley, with its plain as well as hilly and high altitude terrains, has different climatic and weather conditions from the rest of India. The maximum temperature during summers rarely goes beyond 37 degrees centigrade, but during winter drops down to sub-zero levels. This may have a bearing on the pattern of dermatological diseases. The reason for choosing block Hazratbal of Srinagar district for the study is that it consists of urban, sub-urban, rural, as well as hilly and tribal areas and thus represents diverse population groups.

The study was conducted by the department of dermatology in collaboration with the community medicine department over a period of one year from October 2012 to September 2013. Dermatological consultation was provided by qualified dermatologists at all sub-centres, allopathic dispensaries, primary health centres and community health centres of the block through community visits once every week, thus providing services at the door step. Health camps were organized at centres located within localities, very close to the beneficiaries. As such, the access of patients to these health camps was not difficult and all of them could walk to attend the camps and on occasion home visits were undertaken. Consequently, most of the patients in the peripheral health camps presented of their own or were detected after proper screening in the health camps itself or during house to house visits. The medical block of Hazratbal is comprised of 12 sub-centres, 2 allopathic dispensaries and 2 primary health centres covering an estimated population of around one lakh and having urban, semi-urban, rural, hilly and tribal areas as well. The distance of these centres from the tertiary hospital ranges from 10-30 kilometres. The dermatology team visited the areas by turns and it was ensured that all health centres were visited frequently, at least three times and in different seasons of the year. On the first visit, all new cases were included and dermatological disease identified and on subsequent visits to the same area, only new dermatological diagnoses were recorded. Majority of the diagnosis were made by history and clinical examination. Those who required skin biopsy, patch testing and other specialized investigations were called to the tertiary hospital. Samples for KOH examination and fungal culture, pus/tissue for microscopic examination, culture/sensitivity and Tzanck smear etc., were collected on the spot, when needed and brought to the tertiary centre.

The comparison group comprised of patients seen by the same dermatology team over the same period in the out-patient department of our tertiary care centre. In the tertiary care centre, patients seek dermatological consultation of their own or are referred by other health care professionals/centres. At the end of the study, data was compiled, tabulated and analysed by statistical analysis using software statistical product and service solutions (SPSS) version 16 and windows 7. Chi square test (χ2😉 was used and significance taken as P < 0.05.

There were a total of 1105 dermatoses in the 1065 community cases and 4466 dermatoses in 4358 hospital based patients, as some patients presented with more than one dermatosis.

At the time of data compilation, dermatoses were divided into infectious and non-infectious groups.

Five cases of leprosy (0.38%), 2 indeterminate and 3 lepromatous, were detected in non-locals in the hospital. This is summarized in [Table - 2]. 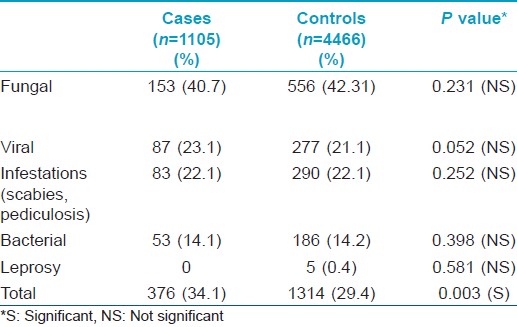 Table 2: Distribution of infectious dermatoses in the two study groups 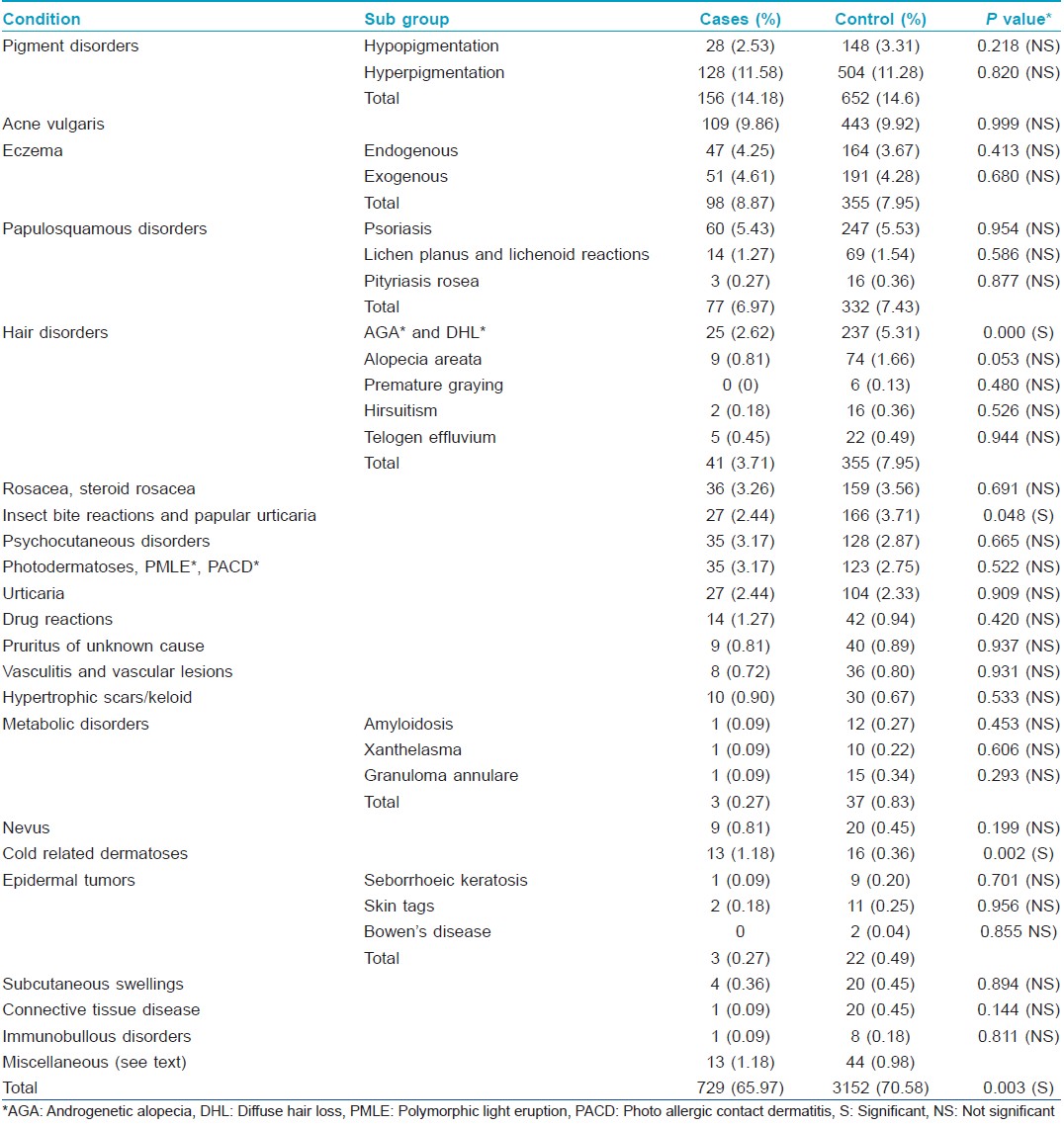 Table 3: Distribution of non-infectious dermatoses in the two study groups

The difference between community and hospital cases was not statistically significant for most of the non-infectious dermatoses, except diffuse hair loss, androgenetic alopecia, insect bite reactions and cold related dermatoses. Alopecia was found more frequently in the hospital group (5.3%) than the community cases (2.6%), ( P ≤ 0.001). Similarly, insect bite reactions occurred in 3.7% of hospital patients versus 2.4% of community cases (P = 0.048). Cold related dermatoses were found more frequently in the community (1.2%) than in the hospital patients (0.4%) (P = 0.002).

Among the infrequently encountered miscellaneous dermatoses in the community, we found granulomatous cheilitis and perforating dermatoses in 2 patients and ichthyosis, striae, xerosis, prurigo, Dupuytrens contracture, pearly penile papules, annular erythemas, acrodermatitis enteropathica and pellagra in 1 patient each. None of the community cases had keratosis pilaris, miliaria, pseudopelade of Brocq, pitted keratolysis and pityriasis lichenoides chronica.

Among the hospital patients, striae were found in 8 patients, perforating dermatoses in 6, granulomatous cheilitis, ichthyosis and miliaria in 4 each and xerosis, prurigo, Dupuytrens contracture, pearly penile papules, annular erythemas, keratosis pilaris, pseudopelade of Brocq, pitted keratolysis and pityriasis lichenoides chronicain 2 each. None of the hospital patients had acrodermatitis enteropathica or pellagra.

There was no statistically significant difference between hospital and community cases with regard to the miscellaneous dermatoses.

The male preponderance in both hospital and community groups taken together, was in accordance with some studies [5],[6] and in contrast to others, where female predominance was noted. [1],[7],[8] This contrast may depend on the institutional set up where the study is conducted.

In the community, there were a greater proportion of cases from rural and tribal background (60.2%) because we had a good turn-out of patients at the health camps conducted in rural areas of the block as compared to the urban and semi-urban areas probably because the urban sections have easy access to tertiary care. Interestingly, patients from a rural background (52.7%) outnumbered those from urban areas (47.3%) in the hospital group, too probably because urban residents avoid the crowded forenoon clinics preferring to visit the centre during evening hours.

A larger proportion of children were seen in the community probably because of the convenience of bringing children to primary care centres near home without having to miss school rather than travelling to a distant tertiary centre. This emphasizes the importance of dermatology outreach clinics in addressing paediatric dermatoses.

Patients in these peripheral stations and difficult to reach terrains usually do not seek any specialized treatment for dermatological diseases, or are provided preliminary treatment by non-specialists. This is because of long distances from the health centres in some cases, but mostly because of non-availability of specialized dermatology services. In Government run health centres, the services are provided free of cost. Medical facilities in these areas are otherwise provided by traditional practitioners as well as those trained in allopathic medicine such as pharmacists etc.

Had we not conducted health camps and house to house visits and on occasion distributed free medicines, we would have missed many cases and the true prevalence data of dermatological diseases from the community would not emerge.

In accordance with other studies, [5],[10],[11] there were fewer infectious dermatoses than non-infectious dermatoses in both the community and the hospital patient groups probably because of good hygienic and sanitary conditions, cleaning habits and health awareness, more so in the urban population than rural and tribal.

Infectious dermatoses including bacterial, viral, fungal and parasite infestations were commoner in the community than in hospital cases. This may be because of lesser awareness about hygiene, infections and infectious agents among the community cases. Non-availability of dermatology services nearby, poverty and household overcrowding also may contribute to this difference. The higher proportion of infectious dermatoses among community cases found in our study is in accordance with some other studies. [1],[6],[8],[9],[12],[13],[14],[15]

The difference in the proportion of each type of infection between community and hospital in our study was not however, statistically significant. Fungal infections were the commonest infection detected in our study, as in some others, [1],[5],[6],[8],[9],[11],[14],[16] whereas bacterial infections were found predominantly in some, [10],[13],[17],[18] and parasitic infestations in other studies. [12]

Hair disorders were important non-infectious dermatoses in our study, as a number of different conditions such as alopecia areata, androgenetic alopecia, diffuse hair loss, hirsutism and premature greying were clubbed together in this group.

This study emphasizes the need for providing frequent dermatology services to the community at primary health care level so that the burden of dermatoses, especially infectious dermatoses, may be reduced in the community. This can be accomplished by spreading awareness among the masses about different dermatoses, various aspects of personal hygiene and sanitation conditions and also by provision of frequent medical consultations at the primary care levels. Larger studies should be conducted in different regions in order to assess the actual magnitude of dermatological concerns in the community at the grass root level.

We acknowledge the help and support provided by the staff of all health centres of block Hazratbal.