Comparison of the efficacy of topical 1% lindane vs 5% permethrin in scabies: A randomized, double-blind study

Background: Permethrin, a pyrethroid insecticide, is not yet available in Iran and may be a useful substitute for the control of scabies in Iran. Aim: To compare the efficacy of topical lindane with topical permethrin in the treatment of scabies in a population in Iran. Methods: In a double-blind, randomized study, all consecutive patients with scabies were randomized into two groups. One group and their family contacts received 1% lindane cream, and the other group and their family contacts were treated with topical 5% permethrin cream. Subsequently, patients were followed up at 2- and 4-week post-treatment. Results: Of the 99 patients enrolled in the study, 47 patients received 1% lindane cream, and 52 patients were treated topically with 5% permethrin cream. Permethrin provided an improvement rate of 84.6% after two weeks, whereas lindane was effective only in 48.9% of patients. Conclusion: Permethrin (5%) cream was found to be significantly more effective in the treatment of scabies in comparison with lindane in this study, and it seems that it could be an alternative treatment.
Keywords: Iran, Scabies, Treatment 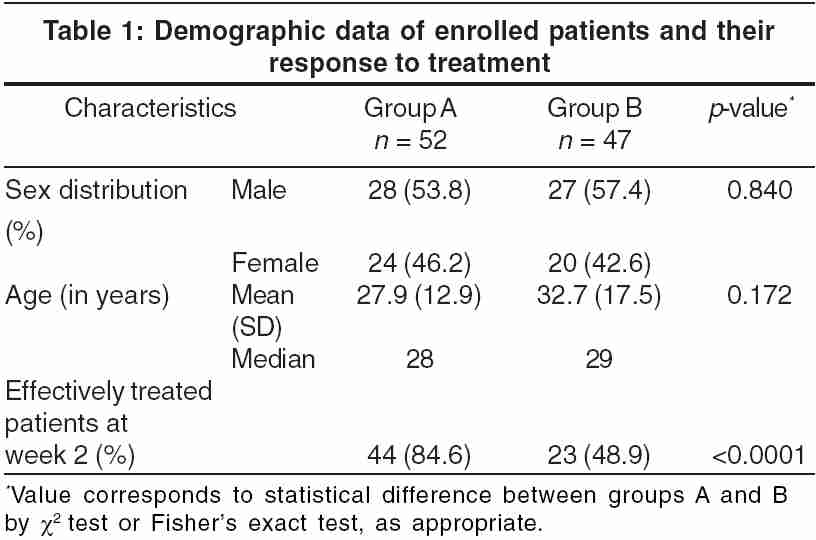 Scabies is considered as a major public health problem in developing countries, including Iran. There are many antiscabietic drugs in Iran, the most commonly prescribed one being the organochloride insecticide lindane. There are some reports of rising resistance to this drug.[1] Currently, 5% topical permethrin cream is considered by many as the drug of choice in the treatment of scabies.[2] Because of the relatively high prevalence of scabies in northern Iran and owing to the lack of information about the efficacy of permethrin in the treatment of scabies in our area, an investigation was carried out to find the best insecticide in the control and management of scabies in northern Iran during the year 2003.

The drugs were prepared and packaged in identical-appearing tubes and randomized and coded by the manufacturer (Gilaranco, Rasht-Iran). Gilaranco, Inc. provided the medications free of charge to all the patients and their family contacts.

Case selection From December 2002 to October 2003, all consecutive patients with scabies who were older than 5 years of age and attending the dermatology outpatient department of Razi Hospital were admitted. Patients who had received any antiscabietics or topical steroids during the past 4 weeks were excluded. In addition, pregnant and lactating women, and those with severe central nervous system, hepatic, and renal problems, were excluded from the study. Informed consent was obtained from all patients who participated in the study and their age and gender were recorded for demographic comparison.

Diagnosis and intervention The diagnosis of scabies was made by the demonstration of eggs, larvae, mites, or fecal material by light microscopy or by the presence of the following three criteria: demonstration of a burrow and/or typical scabietic lesions at the classical sites, nocturnal pruritus, and history of similar symptoms in their families and/or close contacts.

Patients who satisfied the above criteria were divided into two groups randomly. The first group and their family contacts received 5% permethrin cream (group A), and the other received 1% topical lindane cream (group B) in a double-blind manner. The content of the tubes was unknown to both the patients and the research team; the blinding system was maintained throughout the study. The treatment consisted of two applications of the product with a 1-week interval. Patients were advised to apply the cream from head to toe on each occasion and to take a shower 12 hours later. Standard instructions were given about the nature of the disease (including the possibility of continued itching even after successful treatment for up to 2 weeks), mode of application of drugs, importance of treating all the family members and close contacts, and about washing clothes and bedding in hot water. They were advised not to use any antipruritic drug or any other topical medication.

Evaluation Patients were treated with the scabicides and then followed up at intervals of 2 and 4 weeks. They were clinically examined and again evaluated based on the previously defined criteria. Treatment was considered to be effective if, at the end of 2-week post-treatment, there were signs of improvement of itching and no new lesions. Treatment was considered as a failure if there was still a marked itching or appearance of new lesions. In case of treatment failure, the patient was crossed over to the other group. At the end of the fourth week, another evaluation was performed. The results of the study were statistically analyzed using spss, version 10.0, on a computer. To account for statistical differences in two groups, a c[2] -test or Fisher′s exact test was used, as appropriate. A p- value of < 0.05 was considered significant.

A total of 117 patients were studied. Eighteen patients (7 from group A and 11 from group B) were not able to return after the first follow-up examination and were therefore excluded from the study. The remaining 99 patients consisted of 55 males (55.5%) and 44 females (44.5%). Their ages ranged from 6 to 64 years (mean age 30.2 ± 15.3, median age 28.0 years). Of these 99 patients, 52 were treated with permethrin and the others with lindane. The demography of the two treatment groups showed no significant difference [Table - 1].

On the next follow-up, at 4-week post-treatment, one patient in the permethrin group who showed no response at the first follow-up and was subsequently treated with lindane still had severe itching. In contrast, all the 15 patients not responding to lindane who were then treated with permethrin showed improvement in itching and skin lesions.

Only three patients (two in permethrin group and one in lindane group) experienced irritation after application of the drug, but none had allergic reactions.

Scabies is caused by a parasite, Sarcoptes scabiei hominis , which colonizes the human epidermis and can affect people of all ages, regardless of their socioeconomic status. Since the introduction of topical lindane for the treatment of scabies in 1948,[3] this product has become the most widely used antiscabietic drug in many countries, including Iran. Lindane (1%) in shampoo and lotion formulations became available in Iran more than 20 years ago.

In 1983, Hernandez-Perez first reported that some patients with scabies in El Salvador did not respond to 1% lindane even when used twice in 48 hours.[1] During recent years, resistance to lindane seems to be rising and there are reports of several clusters of patients with lindane-resistant scabies worldwide.[4],[5] Further, lindane has limitations for use in children and pregnant women and there were several reports of central nervous system toxicity, convulsions, and even death following accidental ingestion, overuse, or even a single application of lindane.[6],[7] Therefore, there is a need for a more effective and safer medication for the treatment of scabies in Iran.

Permethrin cream (5%) was introduced in 1989 for the treatment of scabies and seems to be a good substitute for lindane. It is considered to be the drug of choice in many countries,[8] but it is not available in Iran. Hence, we had no estimate about its efficacy and safety in our population. Although there have not been any documented cases of scabies resistant to permethrin, several controlled studies have revealed diminished sensitivity to this insecticide.[9],[10] In recent years, permethrin is used in a shampoo formulation in Iran, and this may cause increasing resistance of mites to permethrin. A similar relationship has been reported between lindane use and tolerance of ectoparasites to this product in Panama.[4]

The insecticidal properties of flowers in the genus Chrysanthemum have been known for centuries. It is interesting to know that the use of natural pyrethrins for combating insects is generally considered to have originated in Iran.[11] Permethrin is a photostable synthetic pyrethroid with potent insecticidal activity. It is cosmetically elegant and easy to use, without any unpleasant odor. Permethrin is approx 20 times less permeable through human skin than lindane and the risk for toxic effect is projected to be 40-400 times lower for 5% permethrin cream than for 1% lindane lotion.[12] Permethrin is rapidly broken down by skin esterases to an inactive metabolite, and therefore has very low mammalian toxicity. It acts by disrupting the current in sodium channels that are ubiquitous and therefore acts at all stages of the life cycle of the mite. Neither lindane nor ivermectin has this effect.[13]

In 1986, Taplin et al. showed a cure rate of 91% for permethrin in comparison with 65% for lindane in treating scabies at 4-week post-treatment.[4] In another trial, Schultz et al. reported cure rates of 91% and 86.3% with permethrin and lindane, respectively.[14] Although this difference was not statistically significant, permethrin was significantly more effective in reducing the pruritus.[14]

Our results show that topical permethrin was superior to lindane in treating scabies in northern Iran and this is in accordance with previous studies that have reported excellent cure rates with permethrin.[8],[14] Although the persistence of pruritus in scabies for several weeks after cure is not uncommon and is not necessarily predictive of treatment failure, since it is the primary symptom of scabies, a drug with a more rapid effect on relieving pruritus is much more acceptable to patients. There are some reports that complete clearance of lesions occurs earlier in permethrin-treated patients[15] and we think the better response to permethrin in our study is partially related to its properties in reducing pruritus.

Adverse effects were very rare with either permethrin or lindane. Previous comparative studies have showed that permethrin is also superior to ivermectin in the treatment of scabies.[15] Usha et al. showed that both permethrin and ivermectin are effective in preventing recurrences of scabies over a period of 2 months.[15]

Cost-benefit and safety analysis of antiscabietic drugs have showed that 5% permethrin is the best treatment for scabies in infants and young children.[16] In addition, a recent study revealed that permethrin in a new thermolabile foam formulation may induce a more rapid and complete resolution of itching in scabies.[17]

The authors gratefully acknowledge the support of the Gilaranco Company. This work was supported by the Vice-Chancellorship for research affairs, Guilan University of Medical Sciences, Project No:129.