Concomitant trichotillomania, trichotemnomania and skin picking disorder in a woman

Trichotillomania is a well-known obsessive-compulsive disorder characterized by the compulsive habit of plucking one's hair. Trichotemnomania is a related disorder where the patient cuts or shaves his/her hair compulsively.[1] The patients experience an irresistible urge to pull/cut one's hair and the rising tension is relieved only after the act of pulling or cutting or shaving, depending on the case. Herein, we report a case of trichotillomania of the eyebrows with trichotemnomania of the eyelashes and scalp in a woman with skin-picking disorder.

A 24-year-old married woman presented to us with complaints of loss of hair from scalp and eyebrows and scars over face for the last 10 months. She informed that the scars and hair loss occurred suddenly and several such episodes had occurred in the last 8 months. She was otherwise healthy. On examination, the frontal scalp showed short stubs of hair but the hair over the vertex and occipital area was normal [Figure - 1]. She also had a bilateral loss of eyebrows. Her eyelashes appeared to have a “trimmed” appearance, so much so that the first impression was that she had applied artificial eyelashes. Cutaneous examination revealed hypopigmented and atrophic scars over the nose [Figure - 2]. The rest of the cutaneous and systemic examination were normal. Trichoscopy of the scalp revealed several “cleanly cut” terminal hair with normal morphology of the shaft with no features of trichotillomania [Figure - 3]. Dermoscopy of the area of the eyebrows showed the area of hemorrhage, V-hair, black dots and hair of different lengths suggestive of trichotillomania [Figure - 4]. Eyelashes showed foci of abrupt clean cuts with broad distal margins with normal tapered lashes interspersed in-between [Figure - 5]. The lid margin was normal.

Based on these findings, a diagnosis of trichotillomania of eyebrows and trichotemnomania of scalp and eyelashes with skin picking disorder was made. She was referred to a psychiatrist for further management and counseling. A diagnosis of obsessive-compulsive disorder was made. The patient was started on tab fluoxetine (20 mg/day which was later increased to 40 mg/day after 2 weeks) along with cognitive behavioral therapy. She did not report any new episode of hair loss and regrowth of hair started after a follow-up of 1 month. She was followed up every 2 weeks but was lost to follow-up after 2 months.

Trichotillomania and trichotemnomania are both obsessive-compulsive disorders causing self-induced alopecia. These terms are derived from the Greek words: thrix (hair), temnein (to cut), tillo (to pull) and mania (madness). Trichotemnomania is a relatively less known disease and is probably misdiagnosed to be another condition where hair loss is seen. Like trichotillomania which has a high female predilection in adults, trichotemnomania is mostly seen in women,[2] though it has been described in males.[3] The act of damaging hair is not purely voluntary but a mechanism to reduce stress. Though the patients have an insight into their condition and cut their hair consciously, they usually deny their habit, probably due to embarrassment or guilt.[4] Our case also denied cutting or pulling hair. Both conditions usually occur on the scalp, but other parts of the body such as eyebrows, eyelashes, pubic area and axilla may also be involved.[1],[5],[6] Our patient had involvement of scalp, eyebrows and eyelashes but the axilla and pubic area were not involved. The clinical pattern of hair loss in trichotillomania shows sparing of the occipital area and is also determined by the patient's handedness.[3] whereas total alopecia may be seen in trichotemnomania.[1] Trichoteiromania is a related condition characterized by the compulsive rubbing of one's hair. Trichodagnomania is the compulsive habit of biting one's own hair and shows patchy alopecia on accessible sites such as forearms. Trichocryptomania or trichorrexomania is defined as the compulsive act of cutting one's hair with the help of nails producing no alopecia but hair of irregular lengths.[7] 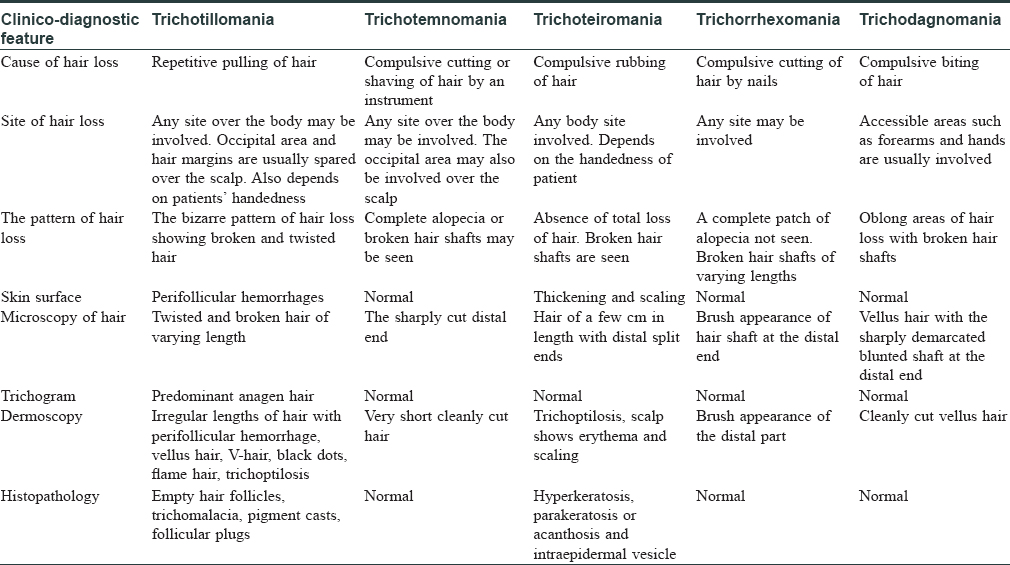 Table 1: Comparison of the clinical and diagnostic features of trichotillomania and related disorders

Only a few cases of trichotemnomania have been reported in English literature.[1],[3],[6],[8] A few other cases have been reported from Europe in non-English literature.[8],[9] Gallouj et al. had described a case of coexisting trichotillomania and trichotemnomania in a patient on the scalp at the same site.[8] Our patient had these two conditions at different sites. Venneuguès et al. reported a 12-year-old boy with loss of bilateral eyelashes with no hair loss elsewhere on the body.[10] He was seen to have trimmed eyelashes with nail clippers prior to the onset of symptoms. He had broken hair on lid margins. Our patient had a unique trimmed appearance of eyelashes, unlike the boy who had persistent loss of eyebrows. Skin picking disorder is also a related obsessive-compulsive body-focused repetitive behavior which has been reported to be commonly associated with trichotillomania.[11] Our case showcases the varying manifestations of a single psychiatric disease on the skin and hair, all in a single patient. We also highlight the role of dermoscopic evaluation for the diagnosis which reduces the need for a skin biopsy.