We are hereby reporting the patch test results over a 6-year period in ethnic Kashmiri population. It is important to note that our center provided the sole patch testing facility for the local population over this period.

A total of 550 patients were seen at our contact dermatitis clinic from November 2006 to October 2012 and the patch test results obtained were analyzed retrospectively. The demographic profile and clinical details were filled in a preformed format at the first visit and the clinical evaluation included the morphological type of eczema, the sites involved, the duration, the seasonal and photo-exposure related variation, and any coexistent skin disorders.

All the patients were patch tested using the Indian standard series as recommended by CODFI and marketed by Systopic Labs India Ltd. A standard protocol was employed in each patient and the readings were taken 15-30 min after removing the test patches on day 2 and then again on day 4 as well. The reactions were interpreted according to the International Contact Dermatitis Research Group (ICDRG) criteria and graded accordingly.

Of all the antigens tested, nickel was found to be the commonest, reported in 67 patients, followed by potassium dichromate in 49 patients. Thus, the commonest two allergens found constituted 27.5% (116 out of 421) of the total patch test reactions. Other antigens that were found positive in our series are shown in [Table - 1]. 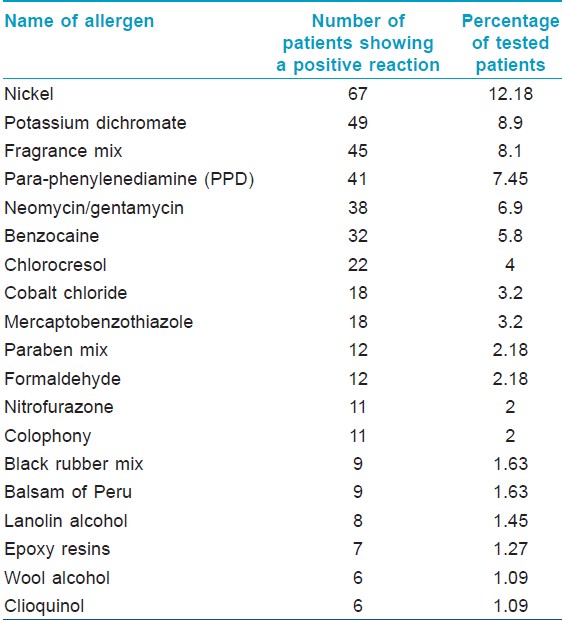 The commonest type of eczema patch tested in our series was hand eczema, seen in 214 patients and the commonest allergens were again found to be nickel and potassium dichromate in 30 and 21 patients, respectively [Table - 2]. 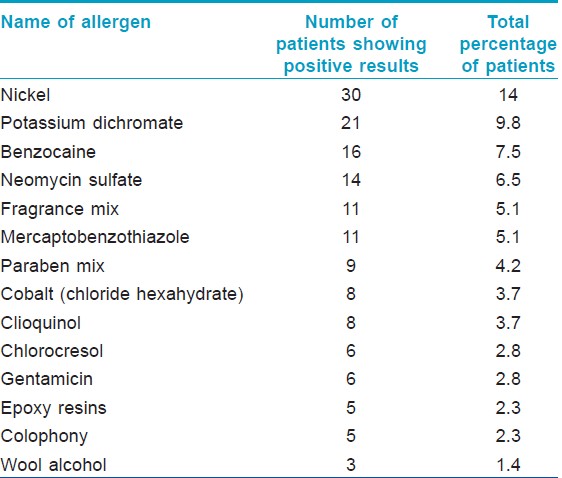 The second commonest type of eczema seen in this series was airborne contact dermatitis (ABCD) and in this group the commonest allergens found were fragrance mix and para-phenylenediamine (PPD) in 24 and 22 patients respectively. It is important to note here that parthenium, one of the commonest agents causing ABCD in Indian population, is not found here in Kashmir valley. This accounts for the very low prevalence of parthenium positivity in our patients.

Interestingly, among the two sexes, females showed a slightly higher rate of patch test positivity than males. Of the 314 females tested, a positive reaction was elicited in 145 patients (46.17%), while only 83 among the 236 males (35.16%) showed a positive reaction to one or more allergens. The commonest allergen found in female patients was nickel (in 49 patients), while in males highest number of positive reactions were seen with potassium dichromate, fragrance mix, and PPD in 19, 16, and 14 patients, respectively.

Analyzing the results, about 41.45% of patients that we patch tested showed one or more positive reactions in this retrospective analysis. This is comparable to the figures that have been quoted in studies from the West. [1],[2] However, the incidence of patch test positivity in many Indian studies has been higher, in the range of 60-70%. [3],[4] This higher rate has been explained on the basis of a higher incidence of parthenium sensitivity in other parts of India especially in males.

We found nickel to be the predominant allergen in females which is expected from the almost universal practice of ear piercing in our female population. Males showed a significantly less incidence of positive reactions to the patch test allergens than females, a phenomenon that has been reported in many Western studies till date. [1],[5] In our cases, hand eczema was the commonest clinical diagnosis and this is more in conformity with studies from outside India than the Indian studies on this subject. [5],[6] In Indian studies, either footwear dermatitis or airborne contact dermatitis predominate in patients in patch test clinics. [3],[4]

Among topical antimicrobials, neomycin and gentamicin were the commonest allergens [Table - 1], clearly demonstrating the hazards of the rampant use of these antimicrobials in topical medications. Another related issue was a high rate of positivity to chlorocresol that was seen in 22 patients (4% of the study population). Chlorocresol, in addition to being a constituent of many cosmetic products, cross reacts with chloroxylenol, an active ingredient of ′Dettol′, the use of which has increased dramatically in recent years.

After testing, the patients were interviewed for the relevance of the patch test results and the same was recorded in their files. In patients with chromate sensitivity, occupational exposure to relevant substances was seen in 21 patients, while 17 others had a nonoccupational exposure. Thus, the overall relevance of this subgroup was 80%. (38 out of 49 patients) Similarly, in patients with metal allergy on patch testing, 37.28% had relevance to the current dermatitis; while 62.72% others had a past relevance in the form of a past exposure to metallic substances especially in females in the form of ear piercing. Most of these metal-allergic patients had hand eczema. Fragrance mix was seen as a common allergen especially in patients with airborne contact dermatitis. Clinical relevance was seen in majority of these cases (37 out of 45) and was related most commonly to the use of cosmetics and traditional perfumes.