The first report of allergic contact dermatitis from topically applied hydrocortisone appeared in the late 1950s. [1] The prevalence of allergic contact dermatitis to topical corticosteroids varies from region to region and appears to be associated with the regional availability of corticosteroids and prescribing practices. Prevalence rates up to 5% have been reported. [2] The most common form is delayed-type hypersensitivity, but type 1 allergy has also been observed. [3]

The allergen in most corticosteroids is thought to be steroid glyoxal, a degradation product, which interacts with arginine. High arginine-binding corticosteroids, including non-fluorinated steroids such as hydrocortisone are more likely to cause sensitization. Some groups of patients are considered to be at increased risk of corticosteroid sensitivity. These are patients using multiple steroid-based preparations for long periods for the treatment of eczema, leg ulcers, stasis dermatitis, perianal dermatitis, hand and foot eczema, chronic actinic dermatitis and facial dermatitis. Patients with corticosteroid sensitivity can present with varied manifestations such as chronic eczema, local urticarial rash and poor response to treatment or worsening of disease following application of topical steroids.

One hundred subjects were recruited from the contact dermatitis clinic of the Postgraduate Institute of Medical Education and Research, Chandigarh. We included patients with leg ulcers, stasis dermatitis, perianal dermatitis, hand and foot eczema, chronic actinic dermatitis and facial dermatitis who had disease for more than 3 months and who were, or had been using topical preparations. Detailed examination of the patient was done with respect to sites involved and morphology of lesions.

Patch testing was performed with the corticosteroid series (Chemotechnique Diagnostics, Sweden, [Table - 1]) using aluminum chambers pre-mounted on hypoallergenic Scanpor tape and the results were recorded at 48, 96, and 168 h. according to the International Contact Dermatitis Research Group criteria. Patients on oral steroid doses equivalent to or more than 15 mg of prednisolone or other immunosuppressive medications were not included. No other patch test series was tested. 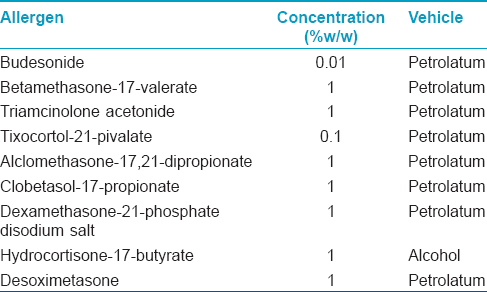 The most commonly used corticosteroid group was group D1, followed in decreasing order of frequency by group A and group B (Coopman′s classification). The most commonly used steroids, such as clobetasol propionate, clobetasone butyrate, mometasone furoate, fluticasone propionate, belong to group D1. Four patients gave history of using hydrocortisone (Group A). Three (3%) of our patients reported intermittent use of budesonide (Group B) in the inhalant form [Figure - 1].

In two patients, tixocortol-21-pivalate was positive at all three readings done at 48, 96, and 168 h. However, none of these pateints reported aggravation of their symptoms with topical corticosteroid use.

Previous studies from Europe have reported a prevalence of 0.2% in Barcelona, [5] 1.6% in Belgium, [6] and 4.8% in a series from United Kingdom. [7] Tixocortol-21-pivalate allergy is a marker of group-A corticosteroid allergy. In India, group-A corticosteroids are available in steroid-only topical formulations as hydrocortisone acetate or butyrate, in combination with hydroquinone and tretinoin for patients with melasma, and in combination with topical antibiotics or antifungals. Considering the ease of availability of these medications and the tendency for self-medication the likelihood of these patients having used a topical corticosteroid preparation is high.

Tixocortol pivalate [8],[9] and budesonide [10] have been reported as the most common sensitizers across studies. Molecules belonging to groups A, B, and D2 (the labile esters) are more likely to induce sensitization than the D1 group steroids, despite being among the most frequently prescribed preparations.

Our study had a small sample size of 100 patients. Complete and reliable history regarding the nature of exposure to topical corticosteroids, drug compound, formulation, and use of over the counter topical corticosteroids could not be elicited in a few of our patients. as they were not formally educated and unable to provide the information sought.

The overall prevalence of 2% positive patch test reactivity observed in our study is within the reported range. Our study population had no previous exposure to tixocortol pivalate because it is not commercially available in India. The availability of hydrocortisone acetate in various topical medications could be the possible reason for positive reactions to tixocortol observed by us (cross-reactivity). Currently the Indian Standard Series recommended for patch testing by Contact and Occupational Dermatoses Forum of India does not include any topical corticosteroid. Our data suggests that tixocortol pivalate should be included in the Indian Standard Series.