Background: The current adult prevalence of HIV in India is 0.34%. HIV infected persons should have adequate knowledge about the modes of transmission of infection. This is essential for reducing the risk of secondary infection, preventing coinfection from other viruses such as hepatitis B and for protecting the uninfected. Identification of the correlates of poor knowledge among HIV positive subjects will aid in planning effective measures to improve their health knowledge about HIV. Aims: To explore HIV related knowledge among HIV positive subjects and to determine the correlates of their knowledge. Methods: The study was conducted between November 2005 and May 2007. Two hundred HIV positive subjects attending a tertiary care hospital and three non-governmental organizations in Puducherry, South India, were recruited for the study. They were interviewed using a pre-tested structured questionnaire regarding their knowledge about HIV and were divided into those with HIV knowledge score >90% and those with score ≤90%. The data were analyzed using Chi-square test and logistic regression. Odds ratio (OR) and 95% confidence intervals were also calculated. Results: The median knowledge score was 90%. Knowledge on the modes of HIV transmission was better than that on the modes by which it does not spread. Subjects who had received counseling (OR: 16.78), studied above class 10 (OR: 4.13), and those with duration of more than 1 year since diagnosis (OR: 3.12) had better HIV knowledge score (>90%). Persons counseled by HIV positive peers had a better knowledge. Conclusion: This study revealed the importance of counseling in improving the HIV related knowledge among HIV positive individuals. It also highlights the beneficial effect of peer counseling.
Keywords: Counseling, HIV positive individuals, HIV related knowledge, peer counseling

In India, the current estimated adult prevalence of HIV is 0.34% with 1.8-2.9 million HIV positive persons. [1] The National AIDS Control Programme, Phase III (2007-2012), targets to halt and reverse the epidemic in India over the 5-year period. The priorities of the program are prevention of new infection and integration of prevention with care and treatment. [1] Increasing awareness about the modes of HIV transmission is an important strategy for preventing HIV. Adequate knowledge about HIV transmission is important both for the general population and HIV positive population. Knowledge of HIV infected person about the disease should be adequate as it is necessary for reducing the risk of secondary infections, preventing coinfections of other viruses such as hepatitis B and for protecting the uninfected. [2] A positive correlation has been reported between the knowledge of HIV transmission and risk reduction behavior. [2] Accurate information and better health knowledge are important in bringing a behavioral change. [2] There are many studies focusing on HIV related knowledge among uninfected persons. [3],[4],[5] However, there is a dearth of literature on the level of knowledge of the HIV infected persons. A study on the correlates of low HIV related knowledge will aid in giving additional care to these vulnerable groups. Hence, this study intends to explore HIV related knowledge among HIV positive subjects and to determine the correlates of their knowledge on HIV.

A descriptive study was conducted among the HIV infected persons attending the weekly HIV clinic of Jawaharlal Institute of Postgraduate Medical Education and Research (JIPMER) and non-governmental organizations (NGOs) in Puducherry, namely, Pondicherry Network of Positives (PNP+), Community Care Centre (CCC) and Shanthi Bhavan. In all these centers, both pre-test and post-test counseling were done by social workers who were trained as per the guidelines of National AIDS Control Organization (NACO). The study was undertaken between March 2005 and November 2007. Considering the median stay of patient at each center, the frequency of recruitment varied. It was weekly at JIPMER and CCC, and monthly at Shanthi Bhavan and PNP+. Based on the feasibility at each visit to these study centers, the first three subjects were recruited from their registers. All subjects of age ≥18 years were included in the study, and using the above procedure, 200 subjects were randomly selected. After obtaining written informed consent, the subjects were interviewed in a separate room. Their knowledge on the modes of transmission of HIV was assessed using a pre-tested structured questionnaire. The knowledge about transmission of HIV was assessed using the parameters like transmission thorough mosquito bite, casual contact, toilet seats, saliva, unclean used needles, blood and unsafe sexual contact. Knowledge on cure and vaccine for HIV was also assessed. Percentage of the correct answers was considered as HIV knowledge score. In addition, socio-demographic information such as age, years of education, per-capita income, residence, duration since diagnosis were collected. The study was approved by the Institute Ethics Committee.

Analysis was done using Statistical Package for Social Sciences (SPSS) version 16 (Chicago, IL, USA). The groups were categorized into two: high HIV knowledge (>90%) and low HIV knowledge (≤90%), using the median score (90%) as the cut-off. Association between the various socio-demographic characteristics and knowledge of HIV transmission was evaluated using Chi-square test. To calculate odds ratio (OR) and 95% confidence interval (95% CI), the continuous socio-demographic variables such as age, years of education and duration since diagnosis were dichotomized based on the median value. Independent variables with a significant association in the bivariate analysis were included in the multivariate analysis. The final model was derived by multiple logistic regression (LR) using backward LR method. A P value of <0.05 was taken as the cut-off value for statistical significance.

Age of the 200 subjects ranged from 18 to 75 years with a median of 35 years. Male:female ratio was 1:1. The median of education was 10 years, that is, up to 10 th class. [Table - 1] shows the general characteristics of the study subjects. Most of them were from rural background (50.5%), educated up to high school (60.5%), with a duration since diagnosis of more than 1 year [55.5%, [Table - 1]]. Around 46% of the subjects were currently unemployed. Among males, the most common occupation was driving (12%). Rest of them were employed as farmers (10%), daily wages laborers (6%), construction workers (4%) and other varied jobs. The median per capita income of the study subjects was Rs. 450 per month and the income did not vary much between subjects. Hence, income was not correlated with HIV related knowledge. Most subjects (52%) were interviewed in the NGOs. Clinical examination/diagnosis/lab investigations for these subjects were not available. Hence, to maintain uniformity, staging of HIV was based on the performance scale in World Health Organization classification system for HIV infection, which is as follows: clinical stage I - asymptomatic, normal activity; stage II - symptomatic, normal activity; stage III - bedridden <50% of the day during the last month; stage IV - bedridden >50% of the day during the last month. In the study, 185 subjects (92%) had received counseling, and of them, 65 (35%) were counseled by HIV positive peers. 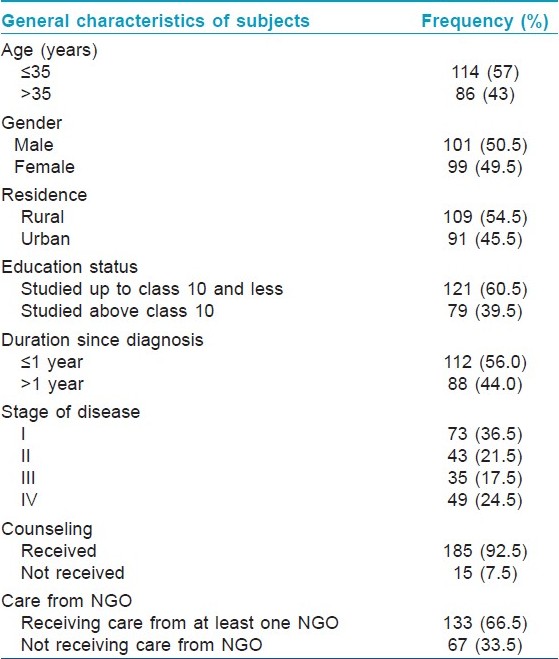 The median HIV knowledge score was 90% (SD 27%, min-max = 0-100%). In the study, 178 (89%) subjects were aware that HIV could be transmitted by unsafe sex, contaminated blood and needles. Only 118 (59%) subjects were aware that HIV does not spread through saliva, toilet seat, causal social contacts and mosquito bites. In our study, 43.5% had low scores (≤90%), and 56.5% obtained high scores (>90%). Urban residents, patients with educational status above class 10, duration since diagnosis more than 1 year, counseled subjects and persons who received care from NGO were more likely to have a high HIV knowledge score [Table - 2]. These associations were significant at P < 0.05. Though the guidelines recommend pre-test and post-test counseling for everybody undergoing HIV testing, 7.5% (n = 15) subjects did not receive any counseling. Counseled subjects were 21.5 times (95% CI: 2.8-166.9) more likely to have high HIV related knowledge as compared to those who did not receive counseling. Age and gender did not influence HIV related knowledge [Table - 2]. In the study, 185 subjects (92%) had received counseling, and of them, 65 (35%) were counseled by HIV positive peers. Around 74% subjects who had been counseled by peers had good knowledge in contrast to 53% among those without peer counseling. Peer counseled subjects were 2.5 times more likely to obtain better HIV knowledge score (OR: 2.5, 95% CI: 1.3-4.8). 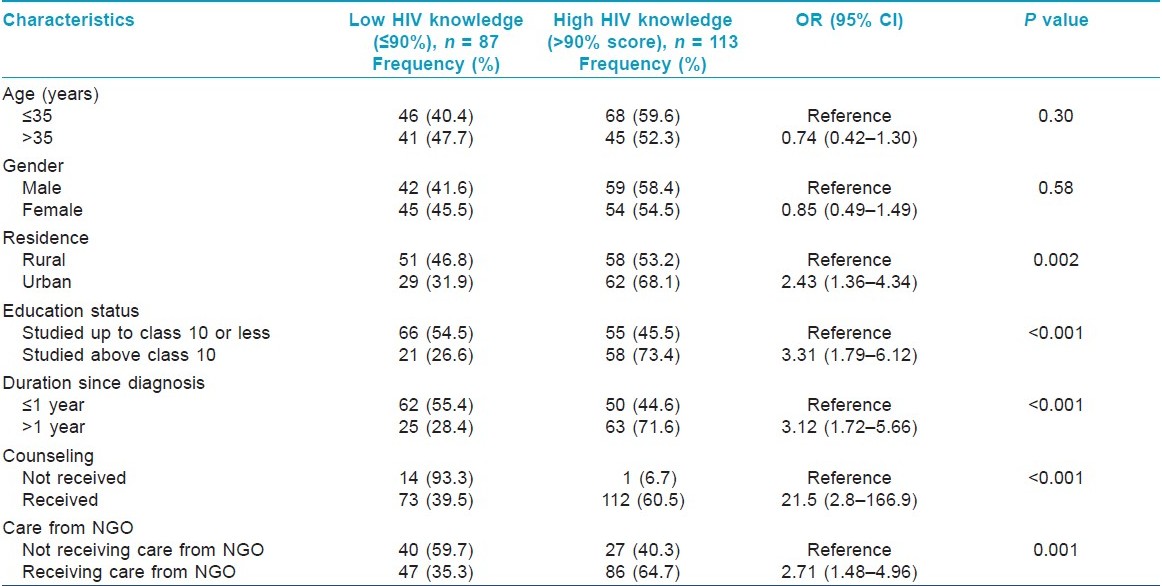 Most of the study subjects were from rural areas with lower socioeconomic status, as indicated by the median per-captia income of Rs. 450. The most common occupation of the male subjects was driving, similar to that observed by another study at JIPMER. [6] The median HIV knowledge score in the present study was 90%, better than that reported from the resource poor area of Boston. [2] However, the study done in Boston also assessed knowledge on other issues such as adherence to medication and access to health care. In our study, 89 and 59% were aware of the modes by which HIV "is transmitted" and "is not transmitted", respectively. This indicates that knowledge of the modes by which HIV does not spread was deficient. Knowledge on HIV transmission was better among general population of Goa than that observed in our study. However, the knowledge on the modes by which HIV is not transmitted was deficient as noted in our study. [7] The misconceptions that HIV could be transmitted through casual social contact and saliva might influence the subject′s behavior with their family members due to fear of transmitting the disease. One subject during the interview commented "I am afraid if my daughter will get HIV, so I stopped cooking and avoid kissing her."

Most important correlate of better HIV related knowledge was counseling. Moreover, peer counseling also had a significant independent impact on knowledge. A systematic review on the effectiveness of peer education interventions for HIV prevention in developing countries also found the beneficial effect of peer education in improving HIV related knowledge. [8] These findings justify the strategy of HIV positive link workers adapted by the NACO. [9] Educational status was associated positively with the knowledge score. Similar association between knowledge and education was observed in studies among general population. [10],[11] It was observed that a higher proportion of urban subjects (48%) had studied up to 10th class as compared to those from rural area (32%). This fact points toward the confounding effect of educational status in the association between residence and HIV related knowledge in the bivariate analysis. Subjects utilizing the services of NGO were more likely to have been counseled. Hence, collaboration between the government health system and NGOs working for HIV is recommended for supplementing each other′s activity.

We thank the NGOs (Community Care Centre, Pondicherry Network of Positives and Shanthi Bhavan) for providing permission and for their cooperation in completing the study.