Correlation of clinical, histopathological, and microbiological findings in 60 cases of cutaneous leishmaniasis

Background: In an endemic area, cutaneous leishmaniasis (CL) is largely diagnosed by its clinical appearance. Diagnostic challenge arises when the lesions appear in nonendemic area, when clinical picture is distorted, or any atypical variant is seen even in endemic regious. In developing countries like ours, the laboratory aid is not widely available and dermatologists mostly have to rely on clinical experience. Aim: The study was aimed to see the correlation of clinical, histological, and microbiological findings in clinically diagnosed cases of CL. Methods: It was an observational and descriptive study and was conducted over a period of 2 years in two dermatology centers in the country. Seventy-seven patients with clinically suspicious lesions of CL were screened and 60 of these were diagnosed as true clinical cases on the basis of criteria for clinical diagnosis. These cases were then subjected to slit skin smear and histopathological examination. Parasitologically positive and suggestive cases were recorded and descriptive statistics were used to evaluate the findings. Results: Out of 60 registered cases, 36 (60%) were smear-positive and 30 (50%) demonstrated Leishman Donovan (LD) bodies in histological sections. Twenty-six of the remaining (parasite-negative) cases showed one of the recognizable histological patterns seen in CL, 3 did not reveal any suggestive histology but responded to antimonial compound, and 1 turned out to be a case of deep mycosis. Conclusion: Considering the magnitude of the problem and limited resources of a developing country like ours, clinical diagnosis alone may be reliable enough in endemic areas.
Keywords: Clinical diagnosis, Cutaneous leishmaniasis, Histopathology, Slit skin smears 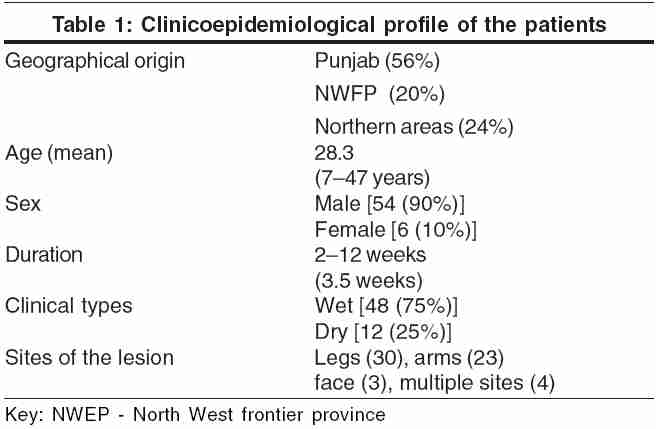 Cutaneous leishmaniasis (CL) is a growing public health problem in several parts of the world, including Pakistan, Afghanistan, and India. It can usually be clinically diagnosed in patients coming from an endemic area and having discrete, relatively painless skin lesions (nodules, plaques, ulcers, or noduloulcerative lesions), mostly on exposed parts of the body. [1],[2],[3],[4]However, superadded infection or mistreatment can alter the clinical picture of CL and cause difficulty in diagnosis and delay in treatment. Diagnosis can also be difficult when the disease presents in an atypical form.[4],[5]

In such cases the diagnosis should be confirmed by examination of smears from lesions, culture on NNN medium, and histopathological examination. Slit skin smear and histopathological examination, relatively older methods of diagnosis that still prevail in our part of the world, give a reasonably high yield if properly performed. Giemsa or Leishman-stained smears obtained from the lesions are a rapid means of diagnosis. A smear can be made in different ways, for example, the impression or touch preparation, a slit smear, scalpel scraping by using a dental broach, or by fine-needle aspiration.[2],[6],[7],[8],[9]

The histological picture in CL differs according to the stage of infection and the clinical type. A consistent finding is a moderate to heavy dermal infiltrate of lymphocytes, plasma cells, and macrophages. In approximately 80% of cases, epithelioid cell granulomas with giant cells and a rim of lymphocytes are present. It is important to search for amastigotes, which are diagnostic. [10],[11],[12] Modern methods for the diagnosis of leishmaniasis, such as immunofluorescence, immunohistochemistry, use of monoclonal antibodies, DNA probes, polymerase chain reaction, and electron-microscopic studies are sophisticated and sensitive methods. Some of them can even pick up a trace of antigen in a tissue specimen. [13],[14],[15],[16] These methods are used to confirm the diagnosis in doubtful cases. In endemic areas, various serological techniques have also been used to support the diagnosis and for screening purposes. [17],[18],[19] Most of these sophisticated laboratory techniques are very costly and exist in only one or two centers in Pakistan; even histopathology facilities are restricted to district hospitals. Because CL is more common in the countryside, the clinical acumen of a dermatologist remains the mainstay of diagnosis in most cases in our part of the world. This study aimed at elucidating the clinical, microbiological, and histopathological features of CL in Pakistan.

Seventy-seven patients of either sex or any age presenting with clinically suspicious lesions of CL, referred by junior dermatologists and general practitioners from various peripheral hospitals, were screened in an outpatient dermatology clinic of our tertiary-care hospital in Pakistan. They were diagnosed as having CL if they met at least five of the following eight clinical criteria: (a) origin from a known endemic area or a history of having visited these areas in the past 6 months, (b) discrete nodules or nonhealing ulcers, (c) largely painless and nonitchy lesions, (d) few (usually one to three) lesions, (e) duration of several days or weeks, (f) resistant to conventional antibiotics, (g) history of similar lesions in the household or locality, (h) some additional morphological patterns, if present, for example, satellite papules, subcutaneous nodules with lymphatic spread (sporotrichoid pattern), paired or clustered lesions, volcanic nodules, and iceberg nodules.

Consent was taken from the remaining 60 patients, who fulfilled the clinical criteria for diagnosis of CL, after explaining the whole procedure. After a detailed clinical and epidemiological history, they were subjected to a slit-skin smear from the margins of lesions and a skin biopsy. The biopsy was taken from the peripheral part of a skin lesion within the inflammatory active outline in the form of elliptical sections measuring approximately 1 cm. After processing, the paraffin-embedded sections were stained with hematoxylin and eosin (H and E), Leishman and periodic-acid Schiff (PAS) stains and were read by an experienced dermatopathologist.

Except for patients who were not diagnosed as CL on histopathology, the others were then treated with once-daily intramuscular injections of sodium stibogluconate 20 mg/kg/day for 2 weeks in case of multiple lesions and lesions on the face or near the joints, and twice-weekly intralesional injections stibogluconate in the remaining patients.

Descriptive statistics were used to calculate the number of positive and negative cases on slit-skin smear and histopathological examinations and clinical accuracy was analyzed on the basis of percentage of clinically diagnosed cases that proved to be true cases of CL by laboratory investigations and by good therapeutic response to treatment.

Our patients belonged to a heterogeneous population from Punjab, north-west frontier province, and northern areas of Pakistan. Most were males (90%) and their ages ranged from 7 to 47 years (28.3 years). The duration of illness varied from 2 to 12 weeks (3.5 weeks). The most common site of the lesions was the leg, followed by the arms, face, and trunk. Four patients had multiple lesions involving more than one anatomical region. The clinicoepidemiological data are shown in [Table - 1]. The clinical presentation was basically of two types: (a) wet type (early ulcerative, rural) and (b) dry type (late ulcerative, urban).

Out of the 60 patients registered as clinical cases, 2 (3.33%) were only smear-positive (histology negative), 4 (6.66%) were only positive on histology (smear negative), and 30 (50%) demonstrated Leishman Donovan (LD) bodies in skin smears as well as in histological sections [Figure - 1]. Of the remaining 24 (40%) parasitologically negative cases, 20 showed one of the recognizable histological patterns seen in CL, three patients had nonsuggestive histology but responded to a therapeutic trial of pentavalent antimony compound, and one turned out to have a deep mycosis (chromoblastomycosis) on histology. The clinical diagnosis was thus confirmed parasitologically in 36 (60%) cases, histologically supported in 20 (33.3%), and was suggested in further 3 (5%) cases by a satisfactory therapeutic response.

All the clinically diagnosed and histopathologically supported cases responded satisfactorily and showed significant to marked healing at the end of 4 weeks. The clinicopathological findings are summarized in a flow chart [Figure - 2].

CL, once restricted to certain areas, is now spreading to places that were previously known to be nonendemic and new foci of infection are regularly being encountered in Pakistan as well as in India.[3],[4],[20],[21] The clinical manifestations of leishmaniasis are not always pathognomonic and can mimic several other conditions, for example, impetigo, furunculosis, infected insect bites, tropical ulcers owing to mixed bacterial infections, leprosy, lupus vulgaris, deep mycosis, and skin cancer. However, in an endemic area, CL can generally be diagnosed by its clinical appearance alone. [1],[2],[3],[4],[5],[22]

Diagnosing CL may be challenging when the lesions appear in a nonendemic area, when superadded infection or home-made remedies distort the clinical picture, or when any unusual variant is seen. In such cases laboratory-diagnostic techniques such as slit skin smears, impression smears, culture for parasites, and histopathological study of skin biopsy specimens facilitate making the diagnosis. Demonstration of amastigotes in skin smears, skin biopsy, and culture of these specimens is confirmatory. Sophisticated diagnostic tests are expensive and require specific equipment and special training.

Our study was aimed at correlating the clinical, histopathological, and parasitological diagnosis of CL. Clinical profiles of the patients including age; duration of illness; number of lesions; distribution, morphology, and progression of the lesions; and major clinical types of the disease were almost similar to those seen in previous studies.[1],[3],[23] A significantly low percentage of females in this series was owing to the fact that the study was primarily done in serving soldiers. Slit skin smear positivity was reasonably good (53.3%). When performed by experienced hands this office procedure can be employed as a rapid and economical means of diagnosis.[6],[9],[24] The histological characteristics and patterns seen in our study were similar to those described earlier.[10],[11],[12] Hence, the skin biopsy can be regarded as another relatively economical laboratory procedure and can be of significant help where facilities exist (as 56.6% parasite positivity and further 33.3% supportive histology were quite encouraging in our study). We did not perform Leishmania culture because it could require up to 2 weeks for a positive result, positive yields are not very high (owing to a lesser load of parasites in cutaneous lesions than in visceral ones), and the chances of culture contamination.

We found that out of the 60 clinically diagnosed patients, 60% were parasitologically confirmed as cases of CL, and the diagnosis was supported by histopathology in another 33.3%. It was only in 6.66% of patients that the clinical diagnosis of CL was not confirmed or supported by slit-skin smears or histology. Hence, the clinical diagnosis was 93.33% accurate and this increased to 98.33% after observing the good response to sodium stibogluconate, as all 59 cases were healed at the end of 4 weeks after treatment. Only one patient proved not to have CL. Since the disease is more common in the countryside, its diagnosis depends primarily on the clinical acumen of a dermatologist in our part of the world. Therefore, our approach to diagnosis is more clinically oriented with some simple, cheap, and easy tests, such as smears and biopsies, to confirm the diagnosis. When available, sophisticated modern diagnostic tests may be reserved for academic purposes.