Repeated open application test (ROAT) is an alternative method to patch test for detection of allergic contact dermatitis. It simulates the exposure pattern to allergen as in daily life, is cheaper, easier to perform and products can be tested as a whole. Hence, we proposed to compare ROAT with patch test as a tool to detect allergic contact dermatitis to hair dye in the Department of Dermatology and STD, Safdarjung Hospital and Vardhaman Mahavir Medical College, New Delhi. The study was approved by the ethical committee of the hospital. After informed consent, 50 patients (>12 years) having dermatitis over head and neck, trunk or upper limbs and temporal correlation with hair dye use were included in the study. Patients on oral corticosteroids or immunosuppressants and pregnant/lactating women were excluded. All patients were subjected to patch test and ROAT.

To perform ROAT, patients were asked to apply a one-fourth fingertip unit of all brands of hair dye used by them and vaseline (negative control) on a marked area of 3 × 3 cm on the volar aspect of the forearm for one week, as standardized by Hannuksela and Salo.[2] Readings were recorded as per Johansen's modified scale.[1] Ten healthy controls with no history of contact dermatitis or atopy were also asked to perform ROAT with two different commonly used brands of hair dye (Garnier and Godrej) and vaseline as control. The data was analyzed with Statistical Package for Social Sciences (SPSS) version 21.0.

Sixty-two patients presented with suspected hair-dye dermatitis, of which 50 completed the study. The clinical characteristics and hair dye used by the patients are given in [Table - 1]. On patch test, 36/50 (72%) showed positive reaction to paraphenylenediamine (PPD) [Figure - 1] along with other allergens [Table - 2]. In those who had positive reaction to PPD and other allergens such as parthenium, nickel sulphate, nitrofurazone, thiuram mix, fragrance mix, colophony and mercaptobenzothiazole, only PPD was found clinically relevant [Table - 2]. The diagnosis in 14 patients who tested negative on patch test and ROAT as well was revised based on repeat history and patch test results [Table - 2] to parthenium in 5, nickel dermatitis in 3, nitrofurazone in 3, colophony in 1 and fragrance mix in 1 and endogenous dermatitis in 1. 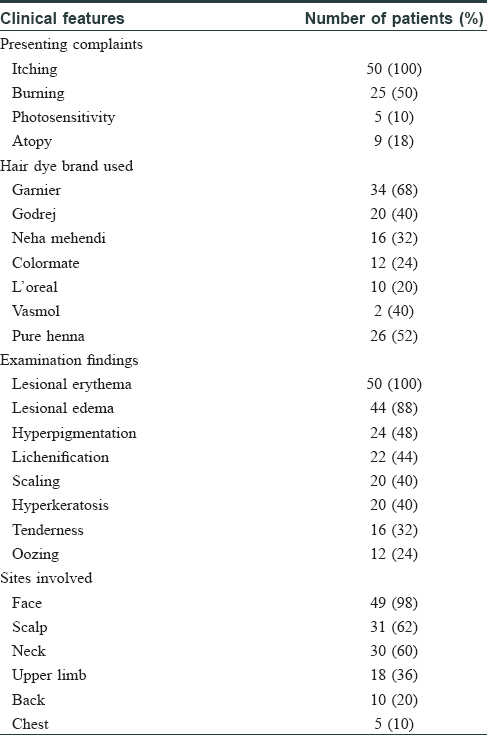 PPD is the most common contact sensitizer in hair-dye dermatitis, others being resorcinol, henna, lead acetate, m-aminophenol, o-aminophenol, p-aminophenol and toluene-2,5-diamine sulfate. The permissible limit of PPD in hair dyes is 6% and estimated PPD sensitivity in general population is around 1%.[3] Even in low concentration, PPD is a potent contact sensitizer as seen on EC3 value (effective concentration of the test substance required to produce a three-fold increase in the stimulation index) for PPD on local lymph node assay.[4] The reported prevalence of positive patch test reactions to PPD among dermatitis patients is 4.4% in Asia, 4.1% in Europe, 6.0% in North America, and 11.5% in India.[5],[6]

In India, patch test positivity in hair-dye dermatitis is 67.5% similar to our study (72%)[7] while in Korea and Japan, it is lower (25% and 35.1%, respectively), which could be because of other allergens such as toluene-2,5-diamine, p-aminophenol, m-aminophenol, cysteamine HCl and o-aminophenol, causing hair dye dermatitis in their population.[8],[9]

ROAT is used to determine the relevance of doubtful positive patch test reactions to preparations in which the suspected allergen is present in a low concentration. ROAT is as good as patch test in determining allergy to oxidized limonene[10] in high concentration, methyldibromoglutaronitrile[11] and nickel,[3] but is inferior to patch test for hydroxycitronellal, formaldehyde and chromium.[12]

The correlation coefficient between patch test and ROAT in our study was 0.84, suggesting significant correlation. Even though ROAT is inferior to patch testing in confirming contact dermatitis to hair dye, it can be considered as an alternative tool in situ ations where patch test cannot be conducted due to reasons such as remote area, non-availability of patch test kit, expertise to read the test, unavailability of PPD antigen or non-compliance by patient.

ROAT has a theoretical risk of sensitization to PPD in patients who are not allergic to it as the concentration of PPD in dyes is high but there are no guidelines for not performing or discouraging ROAT in already sensitized patients. Since ROAT is not performed under occlusion, the risk of sensitization maybe not as high as suspected. The disadvantage of using hair dye 'as is' for ROAT is that it does not give information on which antigen/constituent caused the allergy. Unavailability of hair dye allergens other than PPD and the small number of patients were the limitations of this study.