Cross-checking the dermatology prescriptions: A small step with a big impact - A 1-year study

Correct diagnosis, accurate treatment, use of prescribed medicines as directed and timely follow-up are four crucial steps for a favorable outcome of a patient′s disease management. The first and second steps are very important but time consuming and need high-quality training. The fourth step is patient dependent. In order to ensure that the prescribed medicines are used correctly, it is imperative that the patients get the intended medicine in the first place. This is a significant problem in India due to the large number of illiterate patients, particularly in rural and semi-urban settings. An additional factor could be lax implementation of laws governing pharmacy establishments. But, to correct these, awareness of the society as a whole has to improve. Wrong medicines as a result of dispensing mistakes result in lack of desired efficacy, occurrence of totally unwarranted, and in some cases disastrous, side-effects. Therefore, cross-checking the prescribed medicines and re-instructing the patient in using them could be a cost-effective intervention to improve patient care. This is probably the most effective step that can be undertaken by a doctor in his individual capacity to improve patient care. This study aimed to quantify the usefulness of cross-checking the prescribed medicines in improving patient care. It was conducted in the outpatient section of the Department (OPD) of Dermatology, Venereology and Leprosy in Katihar Medical College from August 2009 to July 2010. All patients were asked to bring back their prescribed medicines from the medicine shop. There was a single medicine shop inside the OPD complex of the medical college. However, as most of the oral or topical medicines used in dermatology were not available in that shop, most of the patients usually got their medicines from few medicine shops outside the college campus. A total of 2397 patients came back with their medicines. The medicines were cross-checked and all instances of wrongly dispensed medicines were documented. All such patients were redirected to the medicine shop to get the correct medicine. The data thus collected were analyzed. Of the 2397 patients, at least one dispensing error was detected in 81 (3.37%) prescriptions. The errors were higher in the first 6 months of the study (4.9%) than in the next 6 months (2.08%). All the patients, when sent back to the medicine shop, got the correct medicine.

The health care system in India suffers from a number of deficiencies. Some of them are common in other resource-poor developing countries, whereas some are unique in India. Dispensing mistakes are one of those unique problems.

The main reasons for this are: 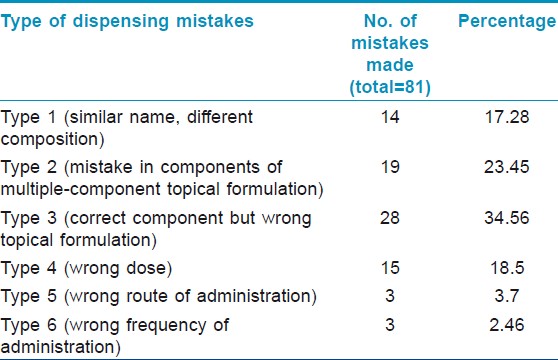 Table 1: Types of dispensing mistakes and their relative percentages

The most common individual dispensing error was dispensing a combination of clotrimazole and betamethasone when the prescribed formulation was plain clotrimazole (12.34%).

These problems are well known to clinicians in India and have been described before. [1] Some catastrophic instances have also been documented. [2] A study done by Shekhar et al. [3] included errors involving inpatient prescriptions for general ward patients. The incidence of dispensing errors in that study was 4.8%, even though it cannot be compared with our study as we included only dermatology outpatient prescriptions. To the best of our knowledge, so far, no systematic study has been done to understand and to document the usefulness of cross-checking the prescribed medicines in improving patient care in the context of dermatology.

The percentage of mistakes was 3.37%, which was definitely high, especially when this is unthinkable in the context of Western countries. Some of the mistakes could have been disastrous if not prevented [Figure - 1], while some were not so serious. Some were due to similar sounding names [Figure - 1], while some were due to plain negligence and illiteracy [Figure - 2] and [Figure - 3]. Subsequent to the study, we decided to write prescriptions in capital letters to decrease confusion.

Cross-checking the medicines prevented a substantial number of patients from using a wrong medicine, some of them with potentially disastrous consequences. Cross-checking also brought about increased alertness from chemists, decreasing the number of mistakes in the last 6 months of the study. Therefore, it is a simple, easy-to-perform but very effective intervention to improve dermatology care.