Skin manifestations of diabetes mellitus have been the subject of various hospital-based descriptive as well as comparative studies.[1],[2],[3],[4],[5],[6],[7],[8] The type and frequency of reported manifestations have varied in different studies, probably due to inherent differences in the study population. The setting of research can also influence the findings. Hospital-based studies have an inherent selection bias, as patients with more severe forms of disease are likely to attend hospitals. Such studies may not accurately reflect the characteristics of disease in the general population.[9] This is particularly relevant for diabetes mellitus which is often asymptomatic. There are few population-based studies on prevalence of skin manifestations of diabetes mellitus.

Thalikulam Health Project is a community-led health intervention, details of which have been published earlier, being carried out in Thalikulam, a coastal village in the central part of Kerala.[10] Health interventions of the project are under the guidance of faculty members of Government Medical College, Thrissur. Health care of the elderly (aged 65 years or above) is one of the focus areas of the project in which faculty members from the departments of general medicine, psychiatry and dermatology are involved. Here, we report the findings of a population-based comparative cross-sectional survey on the skin findings among elderly persons with diabetes mellitus in Thalikulam.

Thalikulam Health Project was initiated in the year 2008, by Thalikulam Vikas Trust, a non-governmental organization functioning in Thalikulam. Designated community health workers associated with the project conducted a preliminary survey on the general health problems in the community in 2008–2009. Of the population of 25,507, 20,942 people participated in this survey. In 2010, we reviewed this database and selected those who would have attained the age of 65 years by 2011 (when evaluation by dermatologists was planned to begin). We identified 1858 such persons who were given special identification numbers. Of them, 538 persons reported to the health workers that they had diabetes mellitus (they were either on treatment or had been advised to take treatment for diabetes mellitus). We verified the availability of such persons for health interventions in 2010, by excluding people who had died or changed residence between 2008 and 2010 which reduced the number to 479 persons. We selected an equal number of persons by a simple random method from the original list of 1320 persons who had reported to the health workers that they did not have diabetes mellitus. The final analysis included 287 persons with diabetes mellitus and 275 persons without diabetes mellitus (total = 562) after further modifications in the sampling frame as shown in [Flowchart 1]. 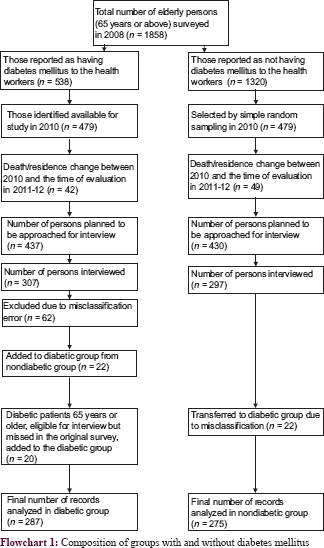 All persons in the self-reported group without diabetes mellitus were tested for fasting blood sugar to pick up those who actually had diabetes mellitus but were unaware of it. Diabetes mellitus was defined as fasting blood sugar ≥126 mg% on two occasions two weeks apart. Such persons were transferred from the group without diabetes mellitus to the group with diabetes mellitus. Study interviews were carried out between May 2011 and February 2012 in special camps arranged close to their houses. Thalikulam Vikas Trust provided logistical support for the camps. All participants were evaluated by one of the authors for the presence of skin findings with emphasis on previously known and reported findings in diabetes mellitus. The findings were recorded in a proforma. Skin findings were further classified into various etiopathogenetic categories such as neurovascular manifestations, bacterial infections, fungal infections, metabolic manifestations, autoimmune conditions and other miscellaneous findings. Results in the two groups were compared. The study was approved by the Institutional Review Board of Government Medical College, Thrissur.

Categorical variables were presented as frequency and percentage and quantitative variables as mean with standard deviation. Pearson's Chi-square test with continuity correction was used to compare the differences in prevalence of each variable in the two groups. For etiopathogenetic categories, two-tailed P < 0.05 was considered statistically significant.

Table 1: Age and sex distribution of study population in relation to their diabetic status 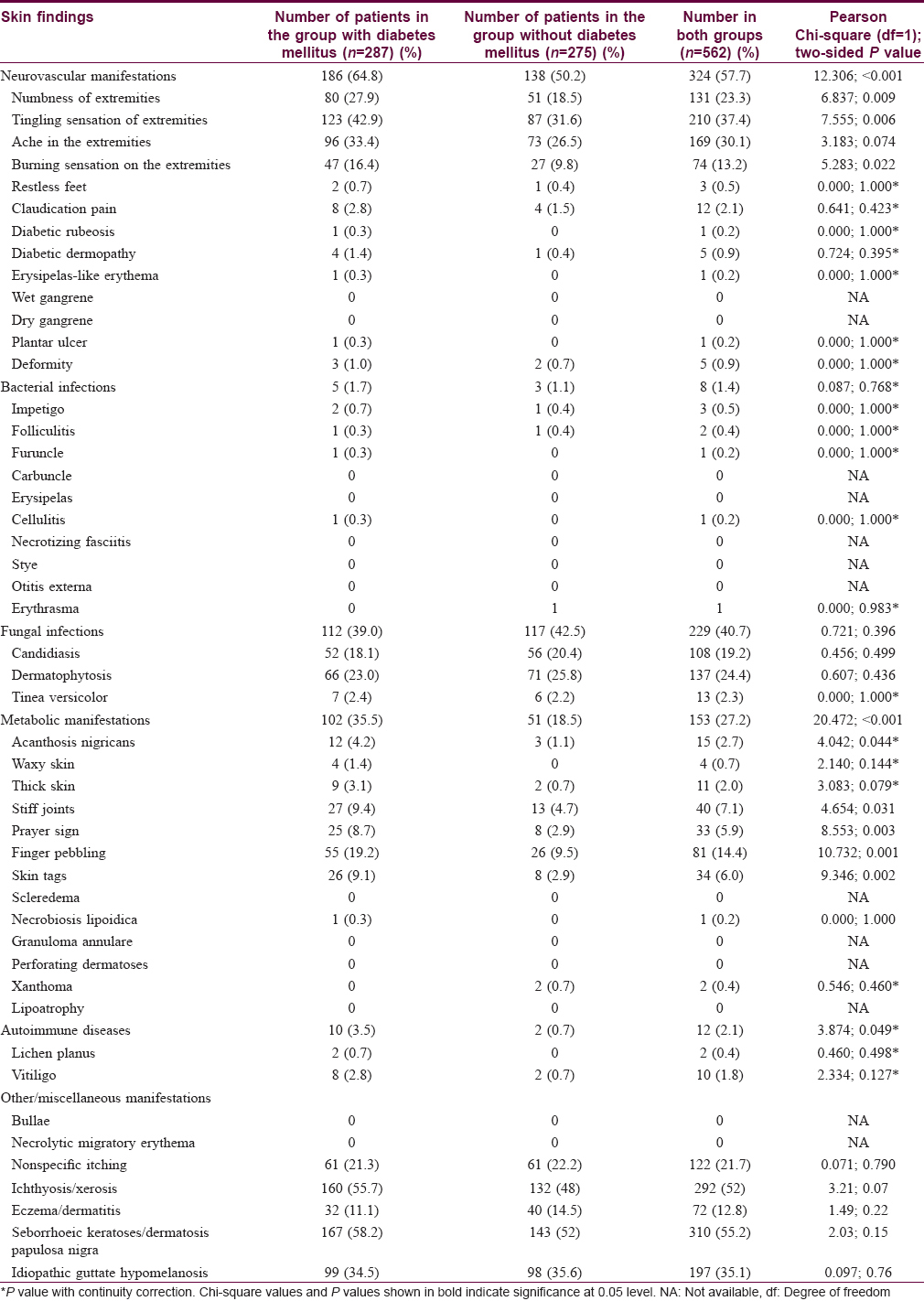 Table 2: A comparison of prevalence of skin findings among elderly persons with and without diabetes mellitus

We analyzed how age, sex and duration of diabetes mellitus affected the findings. The prevalence of candidiasis, dermatophytosis, acanthosis nigricans and pebbly fingers showed a declining trend with advancing age of the patients [Table - 3]. Among the etiopathogenetic categories, the prevalence of fungal infections and metabolic manifestations declined with advancing age. Ache in extremities and non-specific itching was more common among women, whereas finger pebbling was more common among men [Table - 4]. Neurovascular manifestations were more common among women compared to men. The prevalence of acanthosis nigricans and neurovascular manifestations (as a group) increased with greater duration of diabetes mellitus [Table - 5]. No other individual findings or category of findings showed any consistent association with age, gender or duration of diabetes mellitus. 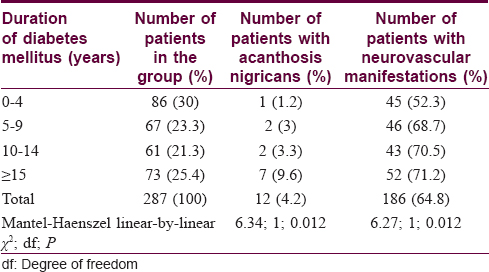 Results of this population-based comparative cross-sectional survey among persons aged 65 years or more in Thalikulam, a coastal village in central part of Kerala indicate that neurovascular symptoms (numbness, tingling and burning sensation of the extremities) and metabolic manifestations (acanthosis nigricans, stiff joints, prayer sign, pebbly fingers and skin tags) were significantly associated with diabetes mellitus. Though lichen planus and vitiligo were individually not associated with diabetes mellitus, autoimmune diseases, when collectively considered, had a moderate association.

Similar to most of the previous studies, fungal infections were found to be common among persons with diabetes mellitus.[3],[5],[7],[12] However, in our study, we found that such infections (mostly onychomycosis, intertriginous tinea pedis and candidal paronychia) were equally common in persons without diabetes mellitus. Several factors might have contributed to a high prevalence of fungal infections irrespective of diabetic status in our study: (a) advanced age – a known predisposing factor for onychomycosis and (b) coastal location and rural background of the population entailing more frequent contact with water and wet soil predisposing to candidal paronychia and intertriginous tinea pedis.[13] Our findings suggest that if such predisposing factors are present, diabetic status may not be an additional risk factor for cutaneous fungal infections. The decreasing trend of fungal infections with advancing age seen among this elderly population may be explained by the expectedly decreased activities entailing contact with water in very old persons. Bacterial infections were rarely encountered in our study, unlike several previous hospital-based studies from India.[3],[5],[7]

Our study showed a high prevalence of neurovascular manifestations among persons with diabetes mellitus compared to previous reports from India.[7],[14],[15] A comparable high prevalence was reported in hospital-based studies from Peru (56.6%) and the USA (43%).[16],[17] One population-based study from Chennai reported a prevalence of 24.6% for neurological and 23.6% for cardiovascular complications in type 2 diabetes mellitus, whereas another study, also from Chennai, reported a 25.7% prevalence of neuropathy.[15],[18] In our study, neurological manifestations were more common among those with greater duration of diabetes mellitus, as expected. However, the increased frequency of neurological symptoms among women noticed in our study warrants further exploration.

The prevalence of acanthosis nigricans was found to be low in this community when compared to various hospital-based studies. Prevalence of skin tags was higher than that reported by Nigam and Pande, and Mahajan et al., but considerably less than that reported by Timshina et al.[3],[5],[7] Xanthomas were not seen in any of our elderly persons with diabetes mellitus, whereas two (0.7%) persons without diabetes mellitus had xanthelasma. Finger pebbling was common (seen in nearly one-fifth) in this population, more frequent than reported by Timshina et al.[5] Although finger pebbling was seen among persons without diabetes mellitus too, its prevalence was significantly associated with diabetic status in our study. Findings such as acanthosis nigricans, skin tags and pebbly fingers are easily identifiable by medical practitioners, health workers as well as by general public. Increased awareness about such findings could help to detect diabetes mellitus earlier in the community.

Yosipovitch et al. highlighted sclerodermoid changes of hands as strongly associated with limited joint mobility in type 1 diabetes mellitus.[6] Our study did not have a diagnostic category as 'sclerodermoid'. However, stiff joints and prayer sign, which are indicative of sclerosis of fingers were found to be strongly associated with diabetes mellitus.[19] Limited joint mobility is reported in both type 1 and type 2 diabetes mellitus, more commonly in the former.[20] Sclerodermoid changes are believed to result from increased glycosylation of fibrous tissue.[21],[22]

Manifestations such as non-specific itching, eczema, xerosis/ichthyosis, seborrheic keratoses and idiopathic guttate hypomelanosis were common among diabetic persons but their prevalence was not significantly different from non-diabetic persons. These features probably represent changes related to aging skin rather than changes in diabetes mellitus.

Our study has some limitations. Firstly, initial assignment of persons into groups with or without diabetes mellitus was based on history obtained by the health workers. This was often inaccurate, as reflected in a large degree of misclassification, especially among the self-reported non-diabetic group. However, we reclassified them correctly based on fasting blood sugar before the final analysis. Secondly, the medical camps in which the participants were evaluated had no facilities for investigations. However, most conditions identified were common which enabled a straightforward diagnosis by dermatologists. Wherever needed, confirmation was obtained by referral to the tertiary care center. Thirdly, the response rate to the survey was only about 70 per cent. Access to health care facilities is often restricted for the elderly with various ailments, who find it difficult to go out of the house without help. We tried to overcome this constraint to some extent, by conducting camps close to their homes and by visiting the houses of bedridden persons. Fourthly, as we had not estimated glycemic levels of diabetic patients, we could not analyze any possible influence it could have on the findings. We also could not analyze the effect of any coexisting diseases and medications on the findings as we could not obtain reliable data about these. Fifthly, as the study was confined to a single village, it may not be correct to extrapolate its findings to other populations with different ethnic, geographic and cultural characteristics. Finally, the findings of a study restricted to elderly persons may not be directly comparable to other studies conducted on patients with diabetes mellitus of all age groups. It is possible that some of the conditions observed in this population may be a reflection more of advanced age, rather than diabetes mellitus. However, the comparative design of our study improved the validity of our findings.

Major strengths of our study are a large sample size compared to most previous studies, the comparative design and community setting which have seldom been used in previous studies; coverage of all accessible elderly persons with diabetes mellitus in the community (which minimized sampling error) and an expectedly higher accuracy of diagnosis made by qualified dermatologists. Cutaneous findings such as stiff joints, pebbly fingers, skin tags and prayer sign can be easily picked up during clinical evaluation. If primary care physicians and health workers are trained to identify such findings, it could facilitate early detection of diabetes mellitus.

The diabetic cohort in Thalikulam offers promising prospects for further studies. It would be interesting to relate the skin manifestations of diabetes mellitus with various systemic complications and ultimately to the overall morbidity and mortality of these patients. It would be useful if one can identify skin markers capable of predicting important systemic complications of diabetes mellitus. Correlating the commonly associated dermatological findings in diabetes mellitus with glycemic levels is a good prospect for further studies.

Numbness, tingling and burning sensation of extremities, prayer sign, finger pebbling, skin tags, stiff joints and acanthosis nigricans were associated with diabetes mellitus among elderly persons in a village in Kerala. Several well-known associations of diabetes mellitus reported in earlier hospital-based studies such as diabetic rubeosis, dermopathy, necrobiosis lipoidica, granuloma annulare, scleredema, xanthoma and perforating dermatoses have limited value as markers of diabetes mellitus in a population setting due to their rarity. In this study, infections, though frequent among persons with diabetes mellitus, were equally frequent in non-diabetics.