This report describes 6 HIV-negative patients including 5 children with scrofuloderma and an adult with lupus vulgaris, out of a total of 303 cases of cutaneous tuberculosis seen during a 4½-year period, who showed a positive tuberculin test and granulomatous histopathology, but failed to respond to first-line antitubercular therapy. They were suspected to have multidrug-resistant infection as no other cause could be ascertained. Tissue aspirate or biopsy was sent for histopathology and culture. Mycobacterium tuberculosis was isolated from the aspirate in three patients and sputum in one with associated pulmonary tuberculosis. Drug susceptibility tests showed that all isolates were resistant to rifampicin and isoniazid, and one each additionally to streptomycin and ethambutol, respectively. In two, culture was unsuccessful. All were administered second-line antitubercular drugs. Clinical improvement was appreciable within 2 months as weight gain, and regression of ulcers, swellings and plaques. Two completed the recommended 24 months of therapy. Multidrug-resistant cutaneous tuberculosis should be suspected in patients with no response to first-line drugs, with clinical deterioration, and where other causes of treatment failure are not forthcoming. Owing to poor isolation rates on culture and low sensitivity of molecular tests, in such cases, a trial of second-line anti-tubercular drugs may be justified for a reasonable period of 2 months. Where facilities permit, culture and drug sensitivity tests should be done before starting treatment. Culture positivity is better from aspirated material.
Keywords: Cutaneous tuberculosis, multidrug resistance, Mycobacterium tuberculosis

There is considerable awareness among the medical fraternity regarding the diagnosis and management of multidrug-resistant pulmonary tuberculosis. Research in this area has been aided by the higher bacillary load in these patients, and the resultant high rates of culture positivity and ease of susceptibility testing. Higher bacillary load is believed to contribute to the development of drug-resistant TB due to the greater likelihood of spontaneous mutations conferring resistance to one or more drugs. However, in extrapulmonary forms like cutaneous tuberculosis, which are essentially paucibacillary, isolation of organisms in culture is difficult and hence demonstration of drug resistance becomes difficult, too. Often, even when the patient shows poor response and clinical deterioration while on anti-tubercular therapy, failure to suspect drug resistance frequently leads to overtreatment with first-line antitubercular drugs, or treatment for other presumed disorders, or misdiagnosis. This report describes the problems in arriving at the diagnosis of multidrug-resistant cutaneous tuberculosis in six patients and their good response to second-line drugs.

Six out of 303 (187 adults and 116 children) patients of cutaneous tuberculosis seen during the 4΍-year period from 2010 to mid-2014 were provisionally diagnosed to have multidrug-resistant cutaneous tuberculosis as they had no relief with standard first-line antitubercular therapy given elsewhere with three or four drugs (rifampicin, isoniazid, pyrazinamide, and ethambutol) for 6-12 months. The main findings in these patients are depicted in [Table - 1]. They had been diagnosed to have cutaneous tuberculosis based on clinical features, significant Mantoux test reaction, and histopathological demonstration of granulomatous dermatitis. All were HIV-negative. However, while on first-line anti-tubercular drugs, new lesions gradually kept appearing and with the exception of an adult with lupus vulgaris, the others who were children and adolescents, were also losing weight, and had constitutional symptoms like fever and poor appetite. 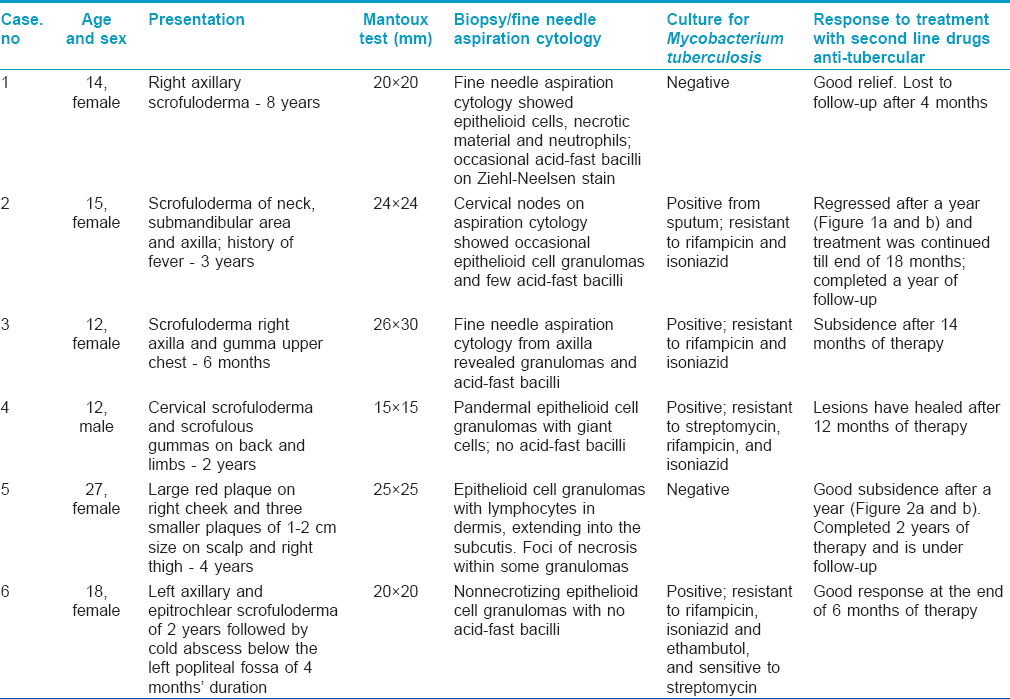 [Table - 1] shows that five children had scrofuloderma and one woman had lupus vulgaris. A 14-year-old girl (case no. 1) had swelling of the right axillary lymph nodes with ulceration and sinuses; a 15-year-old girl (case no. 2) showed swelling of lymph nodes in cervical, submanadibular, and left axillary regions, with shallow erosions and depressed scars at places; a 12-year-old girl (case no. 3) had lower right axillary lymph node ulceration and an eroded subcutaneous gumma in the sternal area; a 12-year old boy (case no. 4) had cervical node swellings showing sinuses and multiple ulcerated subcutaneous gummas over the entire back and upper arms; and an 18-year old girl (case 6) had left axillary and epitrochlear lymph node swellings with sinuses, and a cold abscess on the left calf. History revealed that case no. 3 had developed fits during the 4 th month while on first-line drug therapy; admission followed by further investigations had revealed lymph node tuberculosis of the abdomen on computed tomography (CT) scan and contrast-enhanced computed tomography (CECT) of the brain had shown lesions in the posterior fossa, and right and left frontal lobes with perilesional edema. Oral phenytoin sodium had then been added to the anti-tubercular regimen to control fits. Case no. 5 was an adult woman with a large erythematous plaque over the left cheek and a few nodular lesions; one on the scalp and two on the right thigh, and enlarged submandibular and right axillary lymph-nodes. In addition to first-line anti-tubercular therapy, she had earlier also taken oral corticosteroids and itraconazole for the presumed diagnosis of sarcoidosis and deep mycosis; two abortive attempts had been made to culture both fungus and mycobacteria before she reported to us; polymerase chain reaction (PCR) for leishmaniasis was also negative.

Routine hemogram, liver and renal function tests were within normal limits in all six patients. Chest X-ray revealed infiltration in case no. 2, left pleural thickening in case no. 4 and calcified hilar nodes in case no. 5. Since abscesses predominated in case nos. 1-3 and 6, the aspirate was sent for cytology and culture of Mycobacterium tuberculosis in BACTEC MGIT 960 System (Becton Dickinson). Sputum from case no. 2 was also cultured. In case nos. 4 and 5, skin tissue was sent for histopathology and culture. As shown in [Table - 1], three children (case nos. 1-3) showed granulomatous inflammation and acid-fast bacilli on fine needle aspiration cytology. The histopathological findings in the other three revealed epithelioid cell granulomas with Langhans′ giant cells and necrosis in one, and no acid-fast bacilli. Culture was successful in four cases; in three from the aspirate and in one from the sputum alone. Drug sensitivity tests showed that all the four isolates were resistant to rifampicin and isoniazid. Additionally, the isolate from one child was also resistant to streptomycin and that from an adolescent girl, to ethambutol. In the other two where culture was negative; since no other diagnosis seemed forthcoming and the disease was worsening while on first-line drugs, it was decided to treat with second-line antitubercular drugs.

The four children were administered kanamycin injection i.m. 250 mg/day, and orally prothionamide 250 mg/day, cycloserine or terizidone 250 mg/day, and levofloxacin 500 mg/day. Adult doses were given in case nos. 5 and 6, with the addition of oral pyrazinamide 1500 mg/day. Kanamycin was stopped after the intensive phase of 6 months; the rest were maintained as before in the continuation phase. After 6 weeks, appetite improved and the ulcers showed signs of healing. The children gained 10 kg in weight within a year of therapy. Occasionally, new swellings appeared in two children but subsided quickly. The patient with lupus vulgaris and the adolescent girl noticed regression of lesions at the end of 2 months of treatment. Barring one child who improved but did not report later, the others continued treatment with good response in the form of closure of sinuses, scar formation at the sites of ulcers and non-appearance of new lesions. Considerable flattening of the plaques and reduction in size of the enlarged lymph nodes continued in the adult with lupus vulgaris. The lesions regressed well in those who completed a year of therapy [Figure - 1] and [Figure - 2]a and b. Monthly liver function tests and 3-monthly renal function tests remained normal. Two patients completed the stipulated 24 months of treatment with no signs of recurrence after 1 year and 2 months of follow-up, respectively.

The diagnosis of cutaneous tuberculosis rests on the clinical presentation supported by a positive tuberculin test, granulomatous histopathology and regression following antitubercular therapy; barring few reports, culture has not been an important prerequisite because of poor isolation rates. [1] In a study of 112 isolates of M. tuberculosis from patients with skin tuberculosis it was observed that 96 were susceptible to all first-line drugs while 14 were resistant to one or more drugs tested; nevertheless resolution was noted with anti-tubercular therapy. [2] Cutaneous tuberculosis due to Mycobacterium bovis has also responded favorably to the same regimen. [3] Hence, the lack of therapeutic response in a suspected case of cutaneous tuberculosis has traditionally been viewed as suggestive of an alternative diagnosis. However, such an approach requires modification with the rise in skin tuberculosis caused by multidrug-resistant organisms; i.e., strains resistant to rifampicin and INH. [4] The first report was in a boy with sporotrichoid skin infection followed by another in which two of three were children. [5],[6] In larger series, multidrug-resistant infection has been suspected and proven in the occasional patient with a typical clinical presentation accompanied by failure to respond to first-line drugs. [7]

The present report indicates that the possibility of multidrug-resistant cutaneous tuberculosis cannot be ignored when there is poor response to standard anti-tubercular drugs in patients where no other cause is forthcoming. One child had also developed fits while on treatment due to brain involvement. All these patients, diagnosed on the basis of histopathology, tuberculin test, and exclusion of other disorders, did well with second-line drugs recommended for multidrug-resistant infection. [8] Even the first child (whose aspirate revealed acid-fast bacilli but was culture negative) who could not be followed up beyond 4 months, showed an unequivocal response to second-line drugs. The increasing number of child cases, as seen in this report and documented earlier, [6],[7] indicates that drug-resistant infections are established in the community. Clinical improvement was evident around 6 weeks in the form of general well-being including gain of appetite and weight accompanied by signs of closure of sinuses and healing of ulcers. This is almost similar to that seen when the disease responds to first-line antitubercular drugs, [9] although the total duration of therapy is longer in multidrug-resistant cutaneous tuberculosis.

The problem of confirming the diagnosis of cutaneous tuberculosis caused by multidrug-resistant Mycobacterium tuberculosis remains unresolved. Owing to the low bacillary load, particularly in lupus vulgaris, isolation of organisms is difficult [16] and molecular tests for detection of resistance have low sensitivity. [17],[18] These tests need to be improved [15] and evaluated in skin tuberculosis. An observation of clinical relevance is that all the four positive isolates in this report were from liquefied material; abscess in three and sputum in one. We conclude that when there is a strong clinical suspicion of cutaneous tuberculosis in a patient, where after investigations other causes seem less likely, and the patient does not respond to first-line antitubercular drugs, a trial of second-line drugs may be justified. Though this line of approach is empirical and at times likely to be misused, it is nonetheless suggested by us due to the extremely poor availability of good laboratories, a serious challenge that pulmonologists also have to contend with. [13] Where facilities permit, culture followed by drug sensitivity tests should be done prior to starting second-line antitubercular therapy. However, despite a negative result on culture, the drugs should be continued in the patients′ interest to prevent worsening of disease, but if there is no response, say within a reasonable period of 2 months, the diagnosis should be reviewed.