Vitiligo is a common disorder of pigmentation, affecting 1–4% of the world population. In the Indian context, the disease carries an enormous psychosocial burden.[1] Cytotoxic T lymphocytes play a major role in destruction of melanocytes.[2] Patients with an active, progressive vitiligo are treated with immunosuppressive therapies, such as, oral steroids. Oral steroids, in minipulse form, is a popular mode of therapy in India. Besides, oral levamisole and minocycline too have been used by clinicians, but these therapies carry their own risks.[3] Topical calcineurin inhibitors, like tacrolimus, have also been used in vitiligo. However, cyclosporine, an oral calcineurin inhibitor with prominent immunomodulatory action has not been widely tried for progressive vitiligo. Cyclosporine interferes with the phosphorylation of nuclear factor of activated T cells (NFAT), a transcription factor, which is necessary for transcription of genes encoding interleukin-2 (IL-2). This interleukin is a master cytokine, necessary for full activation of the T-cell pathway.[4] We, therefore, decided to undertake this 12-week open-labeled, single-center study on 18 patients with progressive vitiligo, using oral cyclosporine at a dose of 3 mg/kg/day. The study was approved by the institutional review board of RNT Medical College Udaipur. The study included patients with progressive vitiligo, which was defined as, development of new lesions or extension of preexisting lesions over the past 3 months. Patients with segmental vitiligo, those on any systemic or topical therapy for vitiligo for at least 6 months before enrolment and those with systemic diseases, were excluded from the study. Patients were prescribed oral cyclosporine (3 mg/kg/day), in two divided dosages and no additional therapy was allowed during the study period. Patients' demographic and clinical details were recorded [Table - 1]. Vitiligo activity was assessed using Vitiligo Area Scoring Index (VASI) and photographic documentation was done.[5] Patients were evaluated at monthly interval. Statistical analysis was carried out, wherein quantitative variables were expressed using measures of central location (mean) and dispersion (standard deviation). Pre and post-treatment VASI were compared using parametric (paired t-test) and nonparametric tests (Wilcoxon signed rank test), with significance set at P < 0.05. In our study, progression of vitiligo was found to be halted in 11 out of 18 (61%) patients. It was interesting to note that of these 11 patients, 9 (81%) also showed repigmentation. The mean VASI score improved by 0.43 (P = 0.0016)- from 4.56 to 4.13 [Table - 2]. On comparing pre- and posttreatment VASI using nonparametric test (Wilcoxon signed rank test), the Z SCORE and P valuewas found to be 2.668 and 0.008, respectively. Sites that responded the most, in terms of repigmentation, were the neck and upper chest [Figure - 1]a and [Figure - 1]b. In addition to these regions, the sun-protected sites such as supra and infra clavicular areas, also showed meaningful repigmentation [Figure - 2]a and [Figure - 2]b. Cyclosporine was, by and large, well tolerated with only minor adverse effects observed in only a few patients [Table - 1]. Although this was an open-labelled study, conducted on a small number of patients for a short duration, the results suggest that cyclosporine was not only able to halt disease progression, but could also induce repigmentation in existing lesions. It is possible that besides having an immunomodulatory action, cyclosporine could also have a direct effect on melanogenesis. This has been observed in the vitiligo lesions in an atopic child on cyclosporine therapy and also in an in vitro study.[6],[7] A recent study highlighted the use of cyclosporine in repigmenting the perilesional halo, remaining after autologous noncultured melanocyte–keratinocyte cell transplant.[8] Recent advances in understanding of pathophysiology of vitiligo have opened up new therapeutic opportunities, such as targeting the janus kinase/CXCL10 pathways, by use of drugs like tofacitinib.[9] However, in our pursuit for novel therapies, we should not ignore time-tested immunomodulators, such as cyclosporine. The limitations of this study include small sample size, female predominant sample, and the open-label study design. Based on these observations, we suggest that large-scale, controlled trials are needed to further explore the role of cyclosporine, in both progressive and stable vitiligo. 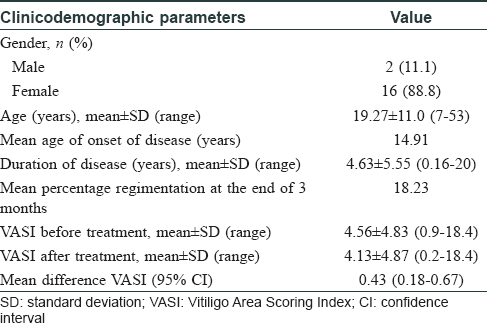