Background: Systemic sclerosis (SSc) is a multisystem disorder that affects various organ systems. Although SSc patients have both physical and psychological illness, psychological distress is sometimes underestimated as most physicians usually pay more attention to physical problems. Aims: To evaluate dermatology-specific health-related quality of life (QoL) in Thai patients with SSc. Methods: SSc patients, who attended the Department of Dermatology, Siriraj Hospital, Bangkok, Thailand, between August 2009 and April 2010, were enrolled. The demographic data and skin manifestations of the patients were recorded. Skin thickness of each patient was analyzed by modified Rodnan skin score. QoL was evaluated by using the validated Thai version of dermatology life quality index (DLQI) questionnaire. Results: A total of 80 patients of SSc were enrolled in this study. Twelve patients had limited SSc, while 68 patients had diffuse SSc. The mean (SD) disease duration before period of evaluation was 9 (12.8) years. The mean total of DLQI score was 6.3 (range, 0-23). Patients with low DLQI score have longer disease duration than patients with high DLQI score (P<0.05). Pain/pruritus was the most significant problem to the patients. Salt and pepper appearance was the cutaneous finding that had association with high DLQI score. Conclusions: SSc had moderate impact on patient's dermatology-specific health-related QoL. Pain, pruritus, and obvious skin findings caused a significant impairment to SSc patients. Therefore, the treatment of pain and pruritus and prominent cutaneous findings should be taken into account to improve QoL of SSc patients.
Keywords: Dermatology life quality index, quality of life, systemic sclerosis

Systemic sclerosis (SSc) is a multisystem disorder that affects several organ systems such as skin, gastrointestinal tract, heart, kidney, and lungs. Various skin manifestations can be found in SSc such as skin sclerosis, Raynaud′s phenomenon, digital pitted scar, and digital ulcers. Although various skin findings are found, skin sclerosis is the clinical hallmark of the disease. Moreover, several studies suggested that severity of skin sclerosis has clinical correlation to severity of internal organ involvement. [1] Many instruments have been developed to measure thickness of skin such as the modified Rodnan skin score (mRSS), ultrasound, durometry, elastometer, twistometer, cutometer, and plicometer. [2] As a result of the chronicity and stigmatization of the disease, it is generally accepted that SSc patients have both physical and psychological illness. Psychological distress is sometimes underestimated as physicians may overlook or do not evaluate it by using reliable measurements. Just as for physical assessment, many self-report instruments were developed and validated to access psychological distress such as quality of life (QoL) questionnaires, psychological and personality instruments. [2],[3] By using valid measurements, it is well documented that approximately half of the SSc patients have mild to severe psychological distress. [3] Although there are several studies about QoL in SSc patients, the data which regard with dermatology-specific health-related QoL in SSc patients are still limited. [4],[5],[6] Therefore, the main objective of this study is to evaluate dermatology-specific health-related QoL in SSc patients by using the dermatology life quality index (DLQI) questionnaire. Another purpose is to collect demographic data of Thai patients with SSc.

This study was approved by institutional review board. SSc patients, who attended the outpatient autoimmune clinic, Department of Dermatology, tertiary center hospital, Bangkok, Thailand, between August 2009 and April 2010, participated in this study. To be eligible for this study, patients had to fulfill the criteria for diagnosis of SSc by American College of Rheumatology and had to be older than 18 years. [7] All patients were able to read and write in the Thai language and did not have any history of psychiatric illness. Patients with overlap syndromes and localized scleroderma such as morphea were excluded from this study. The demographic data and skin manifestations of the patients were recorded in case record form by interview, reviewing each patient′s medical record and conducting a physical examination. Other systems such as impairment of pulmonary function, hypertension from renal causes and gastrointestinal dysfunction were also reviewed by using clinical and previous laboratory investigations such as pulmonary function test, renal function test, and barium swallow. [8] Skin thickness was evaluated by mRSS that was assessed by palpation of the skin in 17 areas (face, anterior chest, abdomen, upper arms, forearms, hands, fingers, thighs, legs, and feet). [9] Each area has score range from 0 to 3, in which 0 = normal, 1 = mild thickening, 2 = moderate thickening, 3 = severe thickening. Therefore, the minimum score of 17 areas is 0, whereas maximum score is 51. The patients who had mRSS ≥20 or 16 with truncal involvement were classified into moderately severe skin involvement. [9] All patients were evaluated by the same well-trained physician to avoid interpersonal variation.

The Thai version of DLQI, which was validated with formal permission of Professor Andrew Finlay, was used in this study. [10],[11] It is a questionnaire which contains 10 questions and 6 domains regarding to the previous 7 days. Six domains include symptoms and feelings, daily activities, leisure, work and school, personal relationships, and treatment. The interpretation of DLQI scores were as follows: 0-1 = no effect at all, 2-5 = small effect, 6-10 = moderate effect, 11-20 = very large effect, 21-30 = extremely large effect. Our patients were asked to reply this questionnaire without assistance by others.

All analyses were performed using SPSS Software version 17.0. Continuous data were described as mean and standard deviation (SD). Comparisons were made by using chi-square, independent-Samples T test, and nonparametric test.

Of 80 patients, 66 were females and 14 were males, with a female to male ratio of 4.7: 1. The mean (SD) age of onset was 37.8 (±14.55) years. The mean (SD) disease duration until evaluation period was 9 (12.8) years. The majority of patients had diffuse SSc (85%), while the rest had limited SSc. Eighteen patients (22.5%) had other underlying diseases such as diabetes mellitus, hypertension, dyslipidemia, anemia, asthma, seizure, cirrhosis, coronary artery disease, old pulmonary tuberculosis, and euthyroid goiter.

Clinical manifestations of the SSc patients are demonstrated in [Table - 1]. The most common cutaneous finding in both groups was sclerodactyly (95%), followed by skin sclerosis (92.5%) and Raynaud′s phenomenon (76.3%), respectively. Patients with limited SSc had more swelling of extremities and digital ulcers than those with diffuse SSc. Gastrointestinal and pulmonary involvement were the most common organ involvement in SSc patients (51.3% and 50%, respectively). Skin thickness of 80 patients was evaluated by mRSS method. The mean score (SD) of mRSS was 15.9 (9.1) with a range of 2 to 40. Thirty-two patients had severe skin involvement that comprised of mRSS ≥20 in 25 patients and mRSS ≥16 with truncal involvement in seven patients. Antinuclear antibody test was done in all patients and revealed positive results in 95% of the patients. Speckled pattern was the most common pattern (81%), followed by nucleolar (75%) and homogenous pattern (54.5%), respectively. Peripheral pattern was found only in 9.1% of the patients (data were not shown). 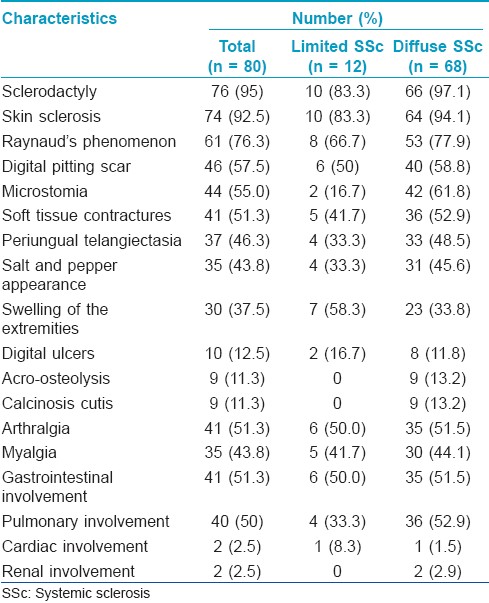 Regarding QoL of SSc patients, the total mean (SD) DLQI score was 6.3 (5.97) scores (minimum = 0, maximum = 23). [Figure - 1] showed details of the mean DLQI scores in all ten questions. Question 1 (symptoms) had the highest score followed by question 2 (embarrassment) and question 5 (social and leisure), respectively. The mean scores of patients with diffuse SSc were higher than those with limited SSc in almost 10 questions, except for question 10 (treatment difficulties). Turning to the mean DLQI score in each question between male and female [Figure - 2], SSc had negative impact on males in aspects of symptoms, embarrassment, work, and interpersonal relationship more than females. The DLQI score of 0-5 means no effect or small effect on patient′s life and the score of more than five can be interpreted as moderate to extremely large effect on patient′s life. [12] By using a score of five as a cut-off, the DLQI scores of our patients were separated into two groups, i.e., low DLQI score (0-5) and high DLQI score (6-30).

[Table - 2] and [Table - 3] showed demographic data and clinical characteristics of SSc patients which were classified by DLQI score. Disease duration before this evaluation and severity of skin involvement had significant association with DLQI score (P<0.05). Patients with low DLQI score have longer disease duration than those with high DLQI score, with a mean (SD) duration of 13.4 (15.3) years and 4.0 (6.6) years, respectively. Most of the patients who had high DLQI score had more skin sclerosis (P<0.05). When looking closely at clinical presentations, only salt and pepper appearance showed significant correlation with high DLQI score, while the others did not have statistical significance (P<0.05). 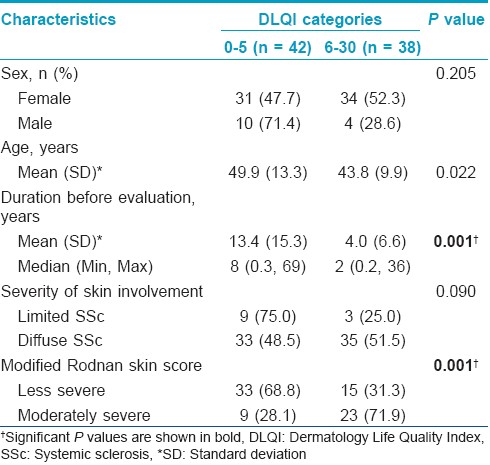 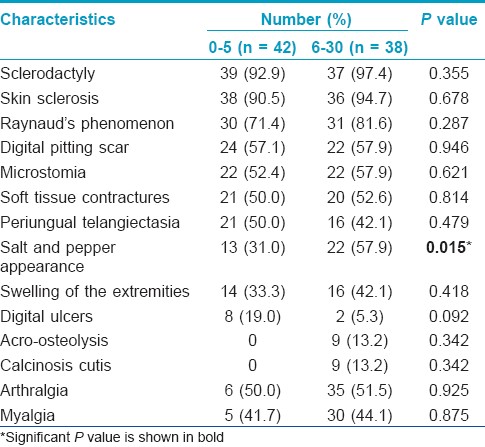 Previous studies showed that SSc frequently affected females more than males with a female: male ratio ranging from 3 : 1 to 8 : 1. Skin sclerosis and Raynaud′s phenomenon are almost always present in SSc. [13],[14] Likewise, the majority of patients in our study were females.

This study also found that the most common feature was sclerodactyly which was detected in almost all patients with SSc. Interestingly, our study showed similar results to that of Rungjutipopan et al.,[15] which revealed that digital sclerosis was the most common finding and more common than Raynaud′s phenomenon. [15] Several studies showed that the prevalence of Raynaud′s phenomenon varied depending on geographic variation and its prevalence was higher in cold climate regions. [16] Therefore, Raynaud′s phenomenon was less common than skin sclerosis because Thailand is located in a hot climate region. Gastrointestinal involvement and pulmonary involvement were more frequently affected than cardiovascular and renal involvements as in the previous studies. [17]

Regarding the QoL, the mean total DLQI score of our 80 SSc patients was 6.3 (range, 0-23), which implied that SSc had moderate effect on patients′ lives. This effect was similar to patients with vitiligo (8.8), fungal infection (6.5), and melasma (6.0) but was better than that of patients with psoriasis (12.9) and urticaria (14.1), as reported in the previous study of DLQI in Thai patients by Kulthanan et al. [11] The reason why we compared the DLQI results with the same ethnicity was because the culture of each country had an effect on answers of the questionnaire. [11],[18],[19]

When we compared DLQI score of each question between males and females, males had more concern about working or studying (question 7), while females had more negative impacts on daily activities and leisure such as shopping, housewives, clothes preference, and sports (question 3 to 6). Sometimes, several factors including sex, gender preference, and psychosocial aspects have a considerable influence on QoL. [21],[22] Both males and females replied that they had the highest negative impact on symptoms/feeling domain (pain and pruritus).

Previous studies reported that the prevalence of pain in SSc was common, occurring in 60 to 83% of SSc patients. [23] Moreover, Schieir et al., [23] showed that Raynaud′s phenomenon, active ulcers, worsen synovitis, and gastrointestinal symptoms were independently associated with pain by multivariate analysis. [23] Similarly, pruritus is also common in SSc and presents in approximately half of SSc patients. The first study which investigated correlation of pruritus and QoL and disability was done by the Canadian Scleroderma Research Group. [4] That study showed that pruritus in SSc was common and had significant association with mental and physical function but not disability. Concerning clinical presentations, salt and pepper appearance seemed to have more significant impact on the patients than other skin manifestations (P<0.05). The reason may be that this leukoderma is usually located on upper trunk and face, resulting in obvious presentation and patients′ concern.