Systemic sclerosis is a multisystem collagen vascular disorder characterized by vascular abnormalities, connective tissue and cutaneous sclerosis and the presence of autoantibodies.[1] Many treatment options have been tried, ranging from vasodilators to immunosuppressants, with none being entirely satisfactory. Dexamethasone-cyclophosphamide pulse therapy is an accepted modality of treatment in many immune-mediated disorders.[2] This retrospective study over 1 year was conducted in Department of Dermatology, Government Medical College, Jammu, to assess the efficacy and safety of dexamethasone cyclophophamide pulse therapy in patients of systemic sclerosis.

Twenty patients who had completed 12 dexamethasone-cyclophosphamide pulses over a period of 1 year were included for retrospective analysis. Details regarding duration of Raynaud's phenomenon, skin tightening, digital ulceration, dysphagia, dyspnea, musculoskeletal symptoms and features of other connective tissue disorders were noted.

All patients underwent a careful general physical and systemic examination. Cutaneous examination was done to record binding down of skin based on modified Rodnan skin score, facial changes, digital ulcers and pitted scars, calcinosis and pigmentary changes. All patients were subjected to baseline investigations which included hemogram, renal function tests, liver function tests, electrocardiogram, X-ray of the chest, hand and feet, urine and stool routine and microscopic analysis, 24 h urinary protein, pulmonary function test, barium swallow and high-resolution computerized tomography (HRCT) of the chest (if required). Hemogram, liver function test, renal function test, electrocardiogram and urine and stool testing were repeated before each pulse. Blood pressure was monitored before each pulse during the pulse therapy. Pulmonary function test and barium swallow were repeated at 6 monthly intervals. Improvement in skin tightening was assessed based on modified Rodnan skin score which was repeated every 6 months. Semen analysis was not done in men as they had completed their family.

Written informed consent was taken from each patient and ethical clearance was obtained. Patients were treated with standard dexamethasone-cyclophosphamide pulse which consisted of slow intravenous infusion of 100 mg of dexamethasone in 500 ml of 5% dextrose over 3 h for 3 consecutive days along with 500 mg of intravenous cyclophosphamide on day 2. These pulses were repeated every 28 days. Daily dose of 50 mg of losartan and 50 mg of cyclophosphamide were prescribed to be taken daily. Losartan 50 mg daily was added as angiotensin-converting enzyme inhibitors/angiotensin receptor blockers are believed to have disease-modifying properties in addition to the vasodilator property.[3] Angiotensin II blockade is also critical in preventing and treating scleroderma renal crisis.[4] Immediate and delayed adverse effects of dexamethasone-cyclophosphamide pulse were monitored throughout the treatment period. Serum cortisol levels were, however, not measured in any of the patients because of nonavailability in the hospital.

Data were analyzed using paired t-test with P< 0.05 as the cutoff value of significance. Of the twenty patients studied, 18 (90%) were women and 2 (10%) were men (female: male ratio of 9:1) with a mean age of 41.45 ± 8.30 years (range: 32 to 60 years). The duration of Raynaud's phenomenon ranged from 6 months to 11 years with a mean of 3.87 ± 2.94 years while the corresponding duration for skin tightening ranged from 6 months to 8 years with the average of 2.81 ± 2.08 years. The associated comorbidities observed included hypothyroidism in 1 (5%), hyperthyroidism in 1 (5%) and hypertension in 2 (10%) patients. At the start of the study, skin score ranged from 15/51 to 40/51. Diffuse cutaneous form was seen among 15 (75%) patients while rest had limited type. Raynaud's phenomenon was seen in all patients with variable severity. Eleven patients showed severe, 8 (40%) had moderate and 1 (5%) had mild Raynaud's phenomenon. However, digital ulceration was seen only among 5 (25%) patients. Although no patient complained of dyspnea, severe restrictive abnormality on pulmonary function test was seen among 7 (35%) patients, whereas 10 (50%) had moderate and 3 (15%) had mild restrictive abnormality. In one patient, calcinosis was seen on palmar aspect of thumb and diffuse pigmentation of the face, upper limb and lower limb was seen in another patient but salt and pepper pigmentation was seen among many patients Four patients complained of dyspnea though all patients had normal barium swallow study. 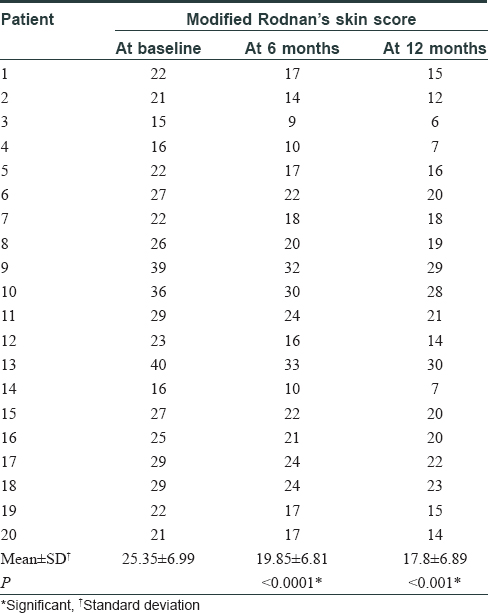 After applying paired t-test, it was found that the decrease in severity of Raynaud's phenomenon and improvement in pulmonary function started after six dexamethasone-cyclophosphamide pulses (P = 0.6227 and P = 0.5, respectively), but the results became statistically significant at 12 months with P = 0.006 and P = 0.01, respectively [Figure - 1] and [Figure - 2]. Digital ulceration healed in all five patients (5/5) after six pulses. Improvement in calcinosis (1/1) occurred, but no improvement was seen in pigmentation even after 12 pulses. Though steroids are known to aggravate gastroesophageal reflux disease, dysphagia improved after three pulses in one and eight pulses in rest of the patients because patients were put on proton pump inhibitors from the start of treatment and suprapharmolologic doses of steroids are not known to aggravate gastroesophageal reflux disease. No significant alteration in blood pressure and laboratory parameters were seen. Side effects were minor and included myalgia in 3 (15%), diarrhea and hiccups in 2 (10%) and headache in 1 patient/s.

Dexamethasone–cyclophosphamide pulse therapy is an accepted modality of treatment in many immune mediated disorders.[2] It has distinct advantage over the conventional daily dose therapy not only in achieving therapeutic response but also decreases the chances of side effect.[5] Though the mechanism of action of dexamethasone-cyclophosphamide pulse therapy is not exactly known. However, it is hypothesized that suprapharmacological doses of dexamethasone and cyclophosphamide knock down the autoantibody-producing cells and when such pulses are repeated at regular fixed intervals, more of such cells are destroyed and they do not get a chance to proliferate and regenerate themselves.[6]

The major limitations of the study are the absence of any control group, small sample size and short follow-up period.

We conclude that although the promising results in our patient support the use of dexamethasone-cyclophosphamide pulse in systemic sclerosis, these results are preliminary and randomized long-term follow-up studies with larger sample size are required to confirm the results.