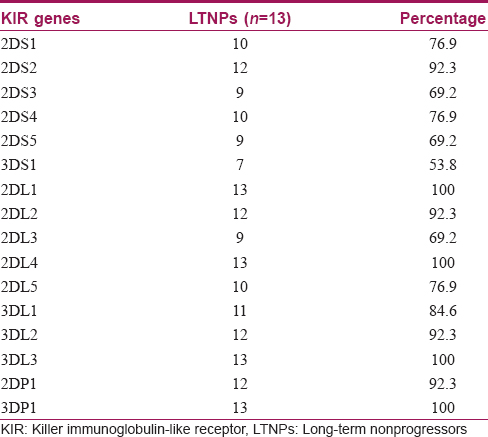 Although several host, viral and environmental factors influence the infection outcome, in the present study, we have focused on killer immunoglobulin-like receptor genes and their association with human immunodeficiency virus pathogenesis in a cohort of long-term non-progressors.

It has been reported that viral load is the strongest predictor of human immunodeficiency virus disease progression.[6] In this study, nine long-term non-progressors enrolled (genotype identification number: 13, 93, 63, 120, 232, 325, 381, 463 and 1 unique genotype) had <34 copies/ml and 4 long-term nonprogressors had <5000 copies/ml of plasma viral load.

Our analysis highlights a high frequency of 3DS1/L1 heterozygotes among long-term non-progressors. A similar observation was made in a study on long-term non-progressors from China, where KIR3DS1/L1 heterozygote condition was associated with slower CD4 cell decline, indicating its possible protective effect.[7] This high frequency of 3DS1/L1 was also observed among the exposed seronegative spouses, whereas KIR2DS1 was significantly associated with low viral load in human immunodeficiency virus seropositive patients in a discordant couple cohort from India.[8] In the present study too, high percentage of the long-term non-progressors (76.9%) showed the presence of KIR2DS1 gene, indicating its possible association in viral load control. Earlier a study in South African population had also shown the association of KIR2DS1 gene with decreasing human immunodeficiency virus-1 viral load.[9]

In our long-term nonprogressors cohort, none had opportunistic/coinfections similar to the observation among long-term non-progressors from South India. Their median CD4 count was also comparable to the human immunodeficiency virus-1 infected population from Southern India.[10],[11]

Till date, 442 distinct killer immunoglobulin-like receptor genotypes have been identified from 125 populations, of which only 10 belong to AA genotype. The current study showed Bx genotype in this long-term non-progressors cohort, as was observed in previous Indian studies.[12]