© 2022 Indian Journal of Dermatology, Venereology and Leprology - Published by Scientific Scholar
Licence
This is an open-access article distributed under the terms of the Creative Commons Attribution-Non Commercial-Share Alike 4.0 License, which allows others to remix, tweak, and build upon the work non-commercially, as long as the author is credited and the new creations are licensed under the identical terms. 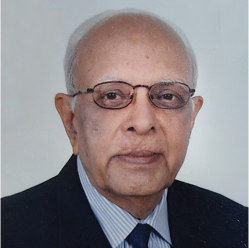 It was with profound grief that I came to know about the sudden death of Dr. Pravin B. Haribhakti, a veteran dermatologist, who died on 16 November 2021 at the age of 86 years at his residence.

Dr. Haribhakti completed his education in dermatology from B. J. Medical College, Ahmedabad, and was awarded M.R.C.P. in Dermatology (Edinburgh) in 1996. He shaped the careers of many dermatologists as an Honorary Professor at Sheth V.S. Hospital and Smt. N.H.L. Municipal Medical College, Ahmedabad, for 22 years. A popular dermatologist and accomplished clinician, he had been in private practice until three months before he passed away.

A true leader, he always appreciated the good work done by those who worked with him. He endeared himself to one and all by his disarming smile, pleasing demeanour and subtle sense of humour. While he kept himself updated with the subject at hand during academic deliberations, as an inveterate and voracious reader, his interests went beyond dermatology. He was fond of reading fiction, books on genetics and evolution, playing brain games, partaking in physical activities, attending the laughter club and watching movies. He had a huge social circle of like-minded people. Despite his busy practice, he spared his valuable time as a trustee of some educational, medical and social organisations.

Dr. Haribhakti belonged to a family of leading professionals. The family has a colony named after them: the Haribhakti Colony in Vadodara. He is survived by his loving and caring wife Mrs. Purnimabahen and three sons and their families.

He will be fondly remembered by the many patients and people whose lives he touched.