Drug advertisements in two dermatology journals: A critical comparison of IJDVL and JAAD

Peer-reviewed medical journals are generally considered to be a source of unbiased and reliable information about drugs and they are the third leading source of information about new prescription drugs for physicians. [1],[2] They might influence prescription behavior of the prescribing physician in both developed and developing countries without necessarily benefitting the patient. [3],[4],[5],[6],[7],[8] Pharmaceutical companies value print advertisements in medical journals because they increase sales effectively and may hasten introduction of new drugs. [9] The monetary involvement in drug promotion is quite high. [10] Pharmaceutical companies spend 20-30% of their sales turnover or about two to three times the average expenditure on research and development, for promotion and marketing. [11] In 2001, around 2% of the total pharmaceutical promotional budget, that is, approximately $400 million, was spent on advertising in various medical journals in USA. [12]

Presently in India, there are no constitutional guidelines which deal with drug promotion in various medical journals though the Magic Remedies (Objectionable Advertisement) Act 1954 prohibits false or misleading advertisements related to drugs. [17]

Though there are a few descriptive studies about journal drug advertising from India, codes of conduct and regulations on pharmaceutical advertising have not been updated since long. [18],[19],[20],[21],[22] Besides, worldwide, such a comparative analysis in dermatology is long overdue. [23] Latest information regarding comparative data is required which would provide policy makers with recent evidence of strengths and weaknesses of different regulatory systems. [13] We decided to analyze the advertisements in official dermatology journals of the respective national associations of dermatology for USA and India, that is, Journal of American Association of Dermatology (JAAD) and Indian Journal of Dermatology, Venereology, and Leprology (IJDVL) based on various criterion of WHO and IFPMA codes.

We included all the advertisements for prescription drugs which appeared in all the issues of JAAD and IJDVL from January 2012 till December 2012. To rule out any discrepancy, supplement issues if any were excluded. Printed copies of the journals were extracted from the central library of Shri Ram Murti Smarak Institute of Medical Sciences (Bareilly), a medical college in northern India. Any advertisement of a prescription drug of at least A4 paper size appearing in JAAD or IJDVL during the study period was included. We excluded advertisements describing more than one drug/formulation/brand in one advertisement and advertisements referring to medical equipment, surgical appliances, nutritional supplements, medications of alternative therapies, or nonprescription medicines. To rule out any duplication, only distinct advertisements were included and subsequent identical advertisements, repeated in different issues, were excluded. However, if two different advertisements described the same drug but had different graphic or written content, then both were included in the study.

Pictures were analyzed separately and grouped into three categories as living/nonliving/combination. Advertisements were also analyzed for their graphic content including tables and graphs. Abbreviated prescribing information (API) was searched for and its surface area was recorded as a percentage of total surface area for that particular print ad.

Number of claims in all advertisements was determined. Cited references were searched in our college library or on the internet using various electronic databases like PubMed, IndMED, Google search, etc. A reference was considered ′available′ if a softcopy or hardcopy of the cited article or its abstract was available in the public domain. This study did not evaluate the authenticity of the claims which were made in the study advertisements.

Data analysis was done with the help of GraphPad software. Fisher′s exact test was used at a significance level of two-tailed P < 0.05 to compare percentages. Analysis of variance (ANOVA) was used to compare significant differences among the sample means. The study was approved by our institutional ethical committee.

All advertisements were independently assessed by a single experienced dermatologist (PG) to maintain consistency. This information was rechecked by another author (MKR). In case of any disagreement, the opinion of a third researcher (NM) was sought and the consensus prevailed. Kappa tests were done to assess the consistency between two observers. The rate of agreement between PG and MKR ranged from k = 0.85 to 0.96 for most of the parameters. 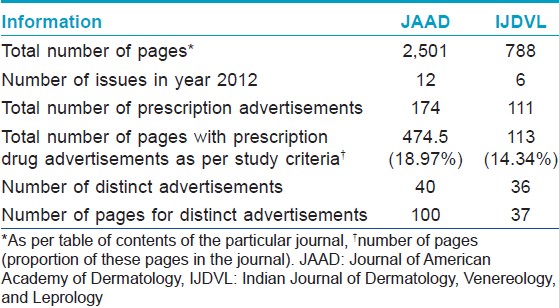 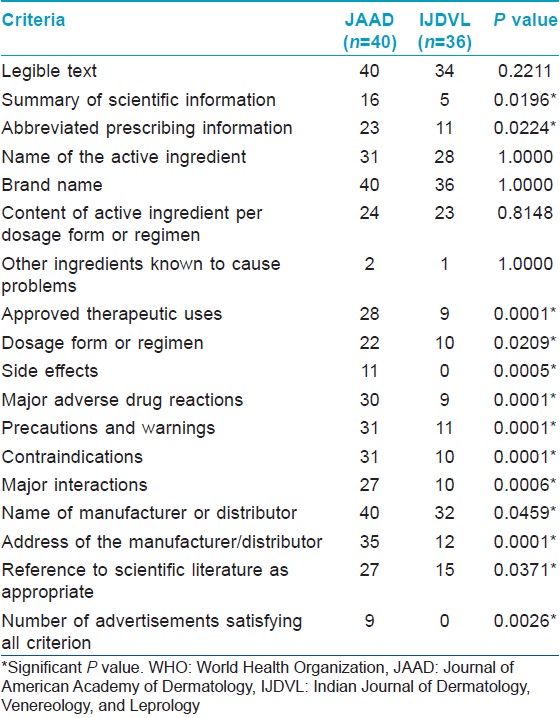 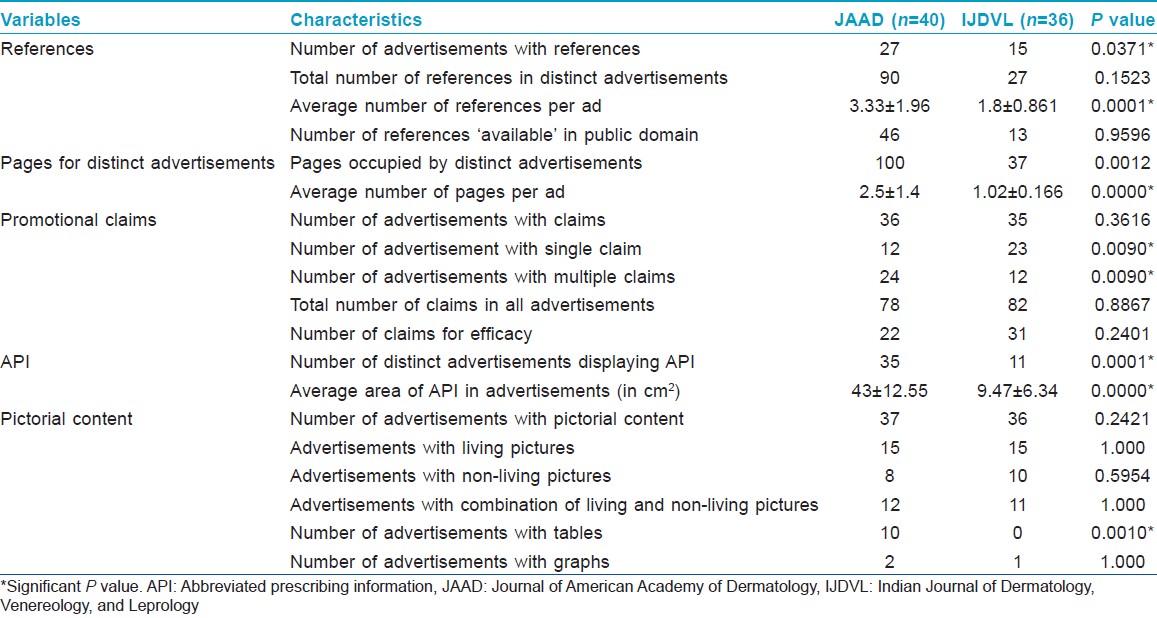 Contrary to the guidelines of the International Committee of Medical Journal Editors (ICMJE), JAAD had many advertisements interspersed between the academic articles compared to IJDVL, which had none. [29]

More advertisements satisfied criteria for the IFPMA Code of Practice than the WHO criteria in both journals. This is noteworthy because the IFPMA code allows less medicinal information to be presented in advertisements. [15] It does not require information on warnings, major interactions, content of active ingredient per dosage form or regimen and names of other ingredients known to cause problems. [28] In India, drug promotional activities are largely governed by the Organization of Pharmaceutical Producers of India (OPPI) that has adopted a self-regulatory code of ethics for drug promotion, which is based on the IFPMA code. [16] This code has to be followed by all member companies. [15],[16],[30] In many OPPI member companies, promotional material has to be approved by a medical advisor. Interestingly, qualified medical advisors are missing in most of the companies in India and the marketing department takes overriding decisions on promotional materials. [30]

Nearly all the advertisements in this study had some pictorial content to make them more attractive, though pictures should not have a role in medical decision-making. [10],[31],[32] The total area devoted to abbreviated prescribing information was significantly lower in IJDVL and hence information was difficult to read. [32],[33],[34]

Various strategies have been proposed and implemented to ensure compliance of journal drug advertisements to ethical guidelines. These consist of tightening of existing government regulations and the need for stringent measures to promote ethical pharmaceutical publications. [10] Past studies have also recommended reinforcement of review procedures by the journals′ editors, including peer review of advertisements. [13],[23] Voluntary implementation of codes of good practices and self-regulation by the pharmaceutical industry has been stressed upon. [35],[36] Even lobbying by medical bodies for appropriate marketing of pharmaceuticals has been tried in the past. [37] Public reporting of violations of these codes has also been suggested as another remedial measure. [28] Unfortunately, none of these measures have had the desired effect. Journals are reluctant to take control activities for obvious reasons ranging from the already heavy workload involved in publishing a journal, to fear of losing financial support, reluctance to endorse advertisements with the journal′s seal of approval, and awareness that a promotional advertisement is not a systematic review, and that physicians are a target audience capable of distinguishing advertisements from scientific evidence. [38] Editors of some journals have rightly argued that journal resources should be dedicated toward improving editorial content and not for reviewing advertisements. [39],[40] Formal training in the critical appraisal of drug advertisements during undergraduate medical teaching in pharmacology needs to be addressed. [25] Several authors have advocated other sources of revenue for medical journals, and that medical journals should accept advertisements for products other than those supplied by the healthcare or pharmaceutical industry. [2] Results from our study and earlier studies show that self-regulatory measures are insufficient. [41],[42],[43] Finally, despite the stir caused by some campaigns, lobbying activities have very little overall effect on improving advertisements. [38]

In India, regional ethics committees collect complaints against unethical drug promotional advertisements and forward them to drug controller authorities to take necessary steps to discipline guilty companies. [33],[44] There is evidence that many violations of marketing codes go unreported. [41] Besides, the sheer volume of data may make this strategy unviable. The Food and Drug Administration (FDA) has acknowledged that it cannot review all submissions because of the volume that it receives. [45] Hence, only the future will tell how beneficial these activities may be in India. Government regulatory bodies must play a proactive role where a code of ethics is failing. [33] Again, this is easier said than done. Regulating promotional activities involves monetary concerns and various possible models to generate revenue have their own pitfalls. [45] The availability of information on complaints, code breaches, and sanctions in the public domain may discourage repeated breaches. [46]

Our study has many limitations; viz. small sample size, identification of advertisements by convenience sampling, accuracy/quality of claims or references were not determined, and results cannot be generalized to other journals or medical specialties or countries. Besides, we might have been unable to trace all the references. Research on journal advertisements is frustrating. [2]

The available regulatory codes provid a useful guideline for drug promotion, but they are still considered the beginning rather than the end of this debate. [30] Overall, the complex issue of ethical drug advertising in dermatology medical journals requires constant review and discussion. Dermatologists should be cautious in assessing any advertisement or claim even if it seems evidence-based. Ongoing efforts including complaints and recommendations by researchers, health professionals, and policy makers to improve the quality of advertisements in medical journals are crucial. [13] In future, interventional research should be planned to determine the awareness of physicians that drug advertisements in medical journals may not comply with the ethical code of conduct, its effects on their prescribing behavior, standards by which advertisements should be reviewed by editors, and journals′ advertising policies. Reliable data on these aspects will lead to informed discussion because some investigators argue that too much attention has already been focused on regulating advertisements that they claim are never read. [49],[50]