Drug reaction with eosinophilia and systemic symptoms (DRESS): A histopathology based analysis

Several years after its original description by Chaiken et al., the exact etiopathogenesis of drug reaction with eosinophilia and systemic symptoms (DRESS) or drug hypersensitivity syndrome remains unclear.[1] Its variable clinical manifestations and the lack of reliable diagnostic criteria has made DRESS, a diagnostic challenge. Understanding the histopathological features of cutaneous lesions of DRESS in different population groups may add to the current knowledge about this drug reaction.

The most common histological feature documented in DRESS is superficial perivascular inflammatory infiltrate mainly composed of lymphocytes. Other frequently noted features include spongiosis, keratinocyte necrosis and interface dermatitis.[2] Though peripheral blood eosinophilia is often noted in DRESS, eosinophils are only occasionally described in the dermal infiltrate.[3] In rare instances, pseudolymphomatous histological changes have been observed.[4] Walsh et al. associated the presence of apoptotic keratinocytes on histology with severe DRESS manifesting liver injury.[5] Better understanding of the molecular mechanisms involved in T-cell activation and organ damage may aid in defining reliable diagnostic criteria and in improving the therapeutic options. Previous authors have indicated an important role for effector and regulatory CD8+ T-cells in precipitating the condition.[6]

Not many studies are available on the histological aspects of DRESS, with data among the Indian population being scarcer still. In this background, we carried out a study on the histopathology of cutaneous lesions of DRESS among patients admitted in the dermatology department of our tertiary care institution during the 1-year study period.

After obtaining clearance from the institutional ethics committee, patients who were admitted to the dermatology department of Government Medical College, Kozhikode from January 1, 2014 to December 31, 2014 and who satisfied the criteria for probable adverse drug reaction on World Health Organization casualty assessment (re-challenge with the suspected drug was not carried out) were evaluated.

Each patient was carefully assessed with respect to the rash, presence or absence of facial erythema, facial and pedal edema, lymphadenopathy, mucosal and systemic involvement. Complete hemogram, renal and liver function tests and absolute eosinophil count were carried out at the time of admission. Liver function test and absolute eosinophil count, if found normal, were repeated at an interval of 5 days till the day of discharge. Peripheral smear analysis for malarial parasites and atypical cells, ultrasound examination of the abdomen and pelvis, electrocardiogram, blood culture, antinuclear antibody profile, chest radiography and serology for human immunodeficiency virus, infectious mononucleosis, leptospirosis, typhoid fever, rickettsia, dengue, chikungunya and hepatitis B, C and A infections were done wherever indicated.

Patients who satisfied the criteria for definite or probable DRESS as per the RegiSCAR scoring system developed by Kardaun et al. and who were willing to undergo a skin biopsy were included in the study after obtaining written informed consent.[7],[8] A preset proforma was used to collect data regarding age, sex, precipitating drug, underlying condition for which the offending drug was introduced, latent interval between drug intake and the onset of symptoms, evolution of symptoms, past medical and drug history including previous drug allergies and the investigation details.

The skin biopsy specimens were evaluated with respect to the features observed in epidermis, dermo-epidermal junction and dermis, including parakeratosis, dyskeratosis, acanthosis, spongiosis, apoptotic keratinocytes, exocytosis, focal or widespread interface dermatitis and dermal inflammation. The inflammatory cells (lymphocytes, eosinophils, neutrophils) in the epidermis and dermis were carefully studied with special reference to atypical lymphocytes. Lymphocytes with an increase in size, irregular nuclear outline and hyperchromatic nuclei were considered as atypical lymphocytes. Atypical lymphocytes having 2–3 times the size of normal lymphocytes were classified as large and others as medium sized. The localization and density of dermal infiltrate in the individual case were noted. Other dermal changes such as vasculitis and nuclear debris when present were documented. Immunohistochemistry staining for CD4 and CD8 were carried out in each case and the predominant lymphocyte in the inflammatory infiltrate was noted.

Response to the withdrawal of the suspected drug, the treatment that was given and the flare ups experienced during the course of the disease were recorded. The patients were followedup till the completion of treatment.

During the study period, 14, (20%) (eight men and six women out of the 70 patients who were admitted to our department with probable adverse drug reaction were diagnosed as probable or definite DRESS as per the RegiSCAR scoring system. After excluding the patient in whom the culprit was indigenous drugs and the four others who were not willing to undergo a skin biopsy, the remaining nine patients (six men and three women) were enrolled into the study. Five of them were categorized as probable and the rest as definite DRESS.

The rash was maculopapular in five patients and exfoliative dermatitis - like in the rest. All the affected patients had a rash suggestive of DRESS (facial edema and rash resolving with psoriasiform desquamation were seen in all), involving more than 50% of body surface area.[8] The liver was the only internal organ affected in 5 of 9 patients in the study group. This was manifested as elevated liver transaminases in four patients, while one patient developed hyperbilirubinemia as well. 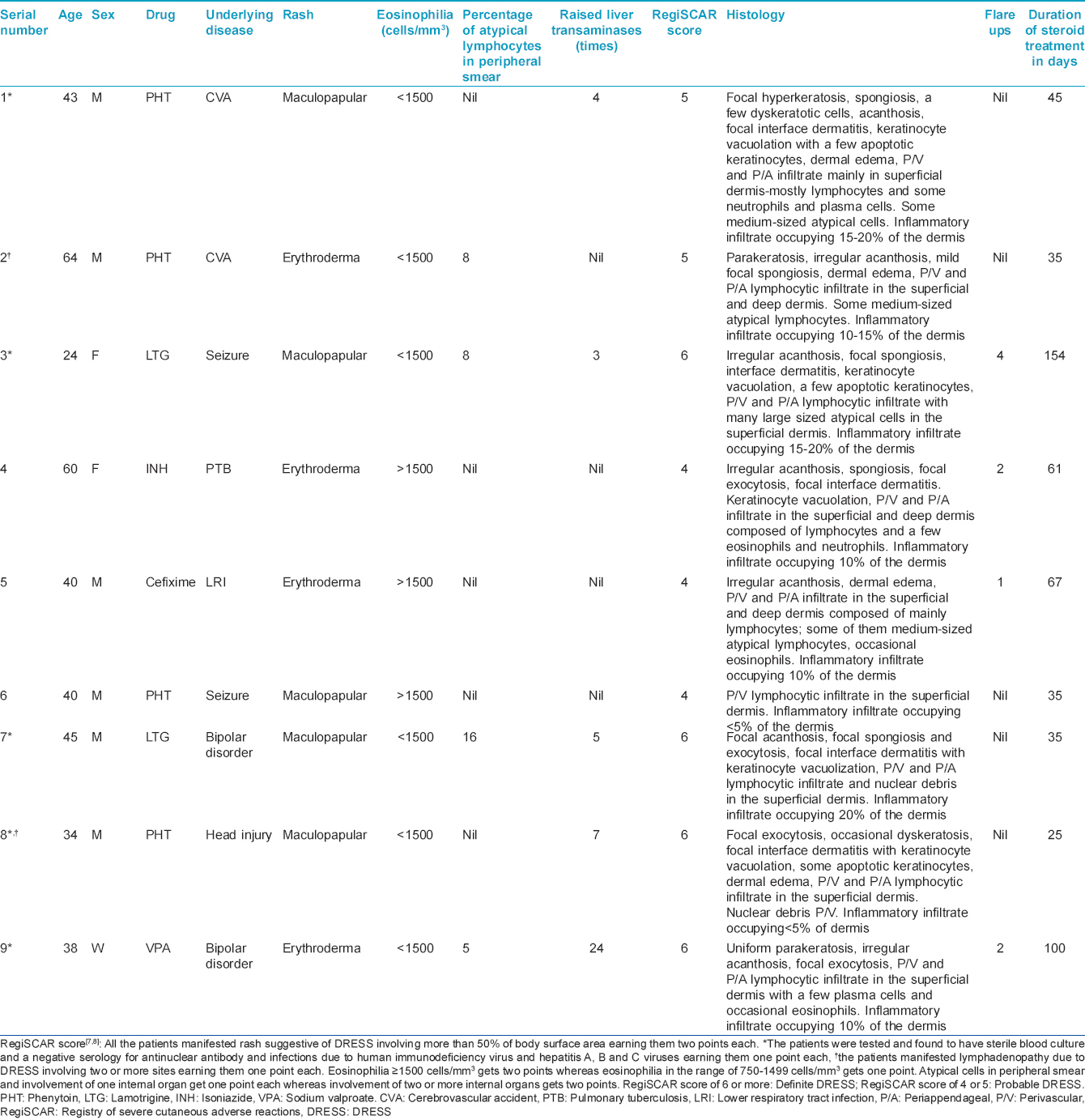 Though all our study subjects had peripheral blood eosinophilia, eosinophils were observed in the biopsy specimens of only three patients [Figure - 4]a and [Figure - 4]b. All these three had an erythrodermic rash and two of them had absolute eosinophil count above 1500 cells/mm 3. One of the patients with tissue eosinophilia had severe hepatic involvement with more than 20 times elevation of transaminases with 4–8 times elevation of bilirubin. The other two patients with tissue eosinophilia had no systemic involvement throughout the course of their disease. All three who showed eosinophilia on histology had intractable pruritus and developed flare ups on tapering steroids, necessitating a slower steroid withdrawal. Disease flares presented as intractable pruritus and reappearance of the scaly rash in the two without systemic involvement (case no 4 and 5, [Table - 1]) while it manifested with reappearance of fever, pruritus and worsening of liver function status in the third (case no 9, [Table - 1]). One other patient with absolute eosinophil count >1500 had no evidence of tissue eosinophilia and manifested a maculopapular skin rash (case no 6, [Table - 1]).

Immunohistochemistry revealed both CD8 [Figure - 6]a and CD4 [Figure - 6]b lymphocytes with CD8 predominance in all patients.

Age of the study population, offending drugs, appearance of the rash noted and the hematological parameters were consistent with the existing data on DRESS.[2],[9],[10] Although male predominance noted in this study contradicts some previous observations, no definite conclusions can be derived as the sample size is small.[9],[10]

Focal hyperkeratosis, parakeratosis and dyskeratosis documented in skin lesions of DRESS were in concordance with previous data.[11] Whether these changes are rather a feature of DRESS induced by phenytoin needs further study as in all except one with the above-mentioned features in our study, the offender was phenytoin. Whether the presence of occasional dyskeratotic cells in the lesional biopsies from phenytoin-induced DRESS with hepatic involvement has any significance needs further evaluation.

The association between hepatic involvement and histological features such as focal interface dermatitis, keratinocyte vacuolation with or without apoptotic keratinocytes observed in four of our patients was reported earlier; though in our study these histological features were absent in the patient with the greatest derangement in liver function status.[5] Unlike the previously documented erythema multiforme lesions, the rash in all four patients with the described histology and hepatic involvement was maculopapular in nature.[5] The patient who did not manifest the above mentioned histological features despite having high liver transaminases (case no 9, [Table - 1]) and another one who had no evidence of hepatic involvement in spite of the above mentioned histological changes (case no 4, [Table - 1]) had an erythrodermic rash. Whether the presence of an interface dermatitis is indicative of liver injury only in DRESS with a specific skin rash (erythema multiforme or maculopapular rash) needs further evaluation.

Further studies may tell us whether the inflammatory infiltrate extending to deep dermis is more likely to produce an erythrodermic rash as noted by us. A denser inflammatory infiltrate was associated with a higher risk for systemic involvement in the study population; but such an association was not observed for disease flares.

Leukocytoclastic vasculitis that has been described in occasional cases of DRESS was not documented in any of our patients.[11] Pseudolymphomatous histology noted in one of our patients (plenty of large atypical lymphocytes) has been described earlier.[4] Immunohistochemistry revealing a CD8 predominant T-cell infiltrate in all patients as noted by us was documented earlier.[6]

Our finding of the relatively mild form of the disease in phenytoin induced DRESS was in concordance with literature.[10],[12] In our study, the lone patient who had no systemic involvement although he had atypical lymphocytes in peripheral smear, had phenytoin induced DRESS, while the other three patients with similar finding had hepatic involvement and two of them were categorized as severe DRESS. The offending drugs in the latter three were lamotrigine (two patients) and sodium valproate.

Our observation of severe DRESS in two of three women as against none among the six men with DRESS was consistent with previous data.[10],[13]

The main limitations of our study were the small sample size and our inability to carry out a detailed immunohistochemistry work-up (due to financial constraints). It has recently been reported that the presence of CD8+ and granzyme B+ lymphocytes are observed in DRESS with severe cutaneous eruptions.[6],[14] Another limitation was the lack of information on clonality of atypical lymphocytes. Since we conducted the study among DRESS patients admitted in a tertiary referral unit the data may not represent mild forms of DRESS.

Histology of DRESS remains variable with changes involving both epidermis and dermis. We could not identify any pathognomonic histopathological feature. However, we suggest that in the appropriate setting, varying combinations of epidermal hyperplasia, spongiosis, parakeratosis and individually necrotic keratinocytes in the background of a lymphocyte predominant dermal infiltrate (with some atypia) favors a diagnosis of DRESS. The bad prognostic factors identified in the study population were female sex, dense dermal inflammation, eosinophilia in the skin biopsy specimen and atypical lymphocytes in the peripheral smear. Phenytoin induced DRESS was found to be mild, irrespective of the variables which were indicative of severe DRESS in the remaining study population. We need more prospective histological studies with a large sample size to test our observations.

We are grateful to all the faculty and postgraduates in the department for their invaluable help in conducting this study.