Background: It has been reported that retinoids may lead to hormonal alterations.
Aim: In this retrospective study, we aimed to study the effect of acitretin on pituitary hormones in psoriasis patients.
Methods: Out of 50 patients intended to be studied, blood samples of 43 patients could be tested before and after 3 months of acitretin therapy (0.2 to 0.5 mg/kg/day).
Results: Patients mean ± standard deviation ages and female/male ratio were 46 ± 17 years and 19/24, respectively. After treatment with acitretin, gamma-glutamyltransferase, alkaline phosphatase, total cholesterol and triglyceride levels increased significantly (P < 0.05). After treatment, total protein, free thyroxine (T4) levels decreased significantly (P < 0.05). No significant differences were observed between before–after acitretin treatment regarding pituitary hormone levels in psoriasis patients (P > 0.05).
Limitations: The retrospective nature of the study, inability to retest blood samples of 7 patients at 3 months post treatment, low dose and short duration of acitretin treatment were limitations of this study.
Conclusion: This study showed that pituitary hormones were not affected except free T4 (thyroid hormone) by acitretin treatment. Further experimental and clinical studies are needed to clarify the effect of acitretin on pituitary hormones.

The relationship of psoriasis with the endocrine system has attracted the interest of many researchers in recent years.[1] There is some evidence suggesting that psoriasis becomes worse during puberty, pregnancy and the menopausal period.[2],[3] The role of stress hormones has also been investigated in the pathogenesis of psoriasis.[4],[5] Altered thyroid hormone levels during the active phase of psoriasis and regression of psoriasis with anti-thyroid therapy indicate a relationship between thyroid hormones and severity of psoriasis.[6],[7] Evers et al. reported decreased cortisol response to stress in psoriasis.[8] Another study found a relationship between psoriasis and hypothalamic–pituitary–adrenal axis, and that higher bedtime cortisol levels were associated with increased severity of psoriasis.[9] Previous studies have shown that drugs used in the treatment of psoriasis may alter several hormone levels, including pituitary hormones.[10],[11]

Retinoic acid receptors and RXR are expressed in the pituitary gland in the embryo, as well as in adults.[12] Vitamin A and its derivatives have also been shown to have regulatory effects on the endocrine system in rats.[13],[14] Similarly, retinoic acid has been demonstrated to modulate some pituitary hormone receptor levels in rat granulosa cells.[15] Retinoic acid levels were found to be higher in psoriatic plaques compared with normal skin.[16]

This was a retrospective noncontrolled study conducted on psoriasis patients presenting to the dermatology department of Yuzuncuyıl University, Van, Turkey. The study protocol was in accordance with the Declaration of Helsinki and was approved by local ethics committee. Out of 50 patients intended to be studied, blood samples before starting, and 3 months after treatment, could be drawn only for 43 patients. Inclusion criteria for enrollment into the study included moderate-to-severe plaque-type psoriasis of more than 6 months duration. Exclusion criteria were as follows: age younger than 18 years, the presence of pregnancy or lactation, infections, a history of previous treatment history within the last 12 weeks before enrollment into the study including phototherapy, immunosuppressive and/or immunomodulating drugs and biological agents. Subjects with chronic diseases such as endocrine, cardiovascular, hepatic, hematologic, renal, thyroid disease and cancer were also excluded from the study.

Acitretin at a dose of 0.2–0.5 mg/kg/day was orally administered to patients with psoriasis vulgaris. The hormonal and biochemical measurements were performed at baseline and after 3 months of acitretin treatment. The clinical improvement was measured by Psoriasis Area and Severity Index.

The retrospective nature of the study, inability to retest blood samples of 7 patients 3 months post-treatment, low dose and short duration of acitretin treatment were limitations of this study.

Statistical analyses were performed using Statistical Package for the Social Sciences version 15.0 software (SPSS Inc., Chicago, IL, USA). The normality of data was analyzed using the Kolmogorov–Smirnov test. All numerical variables following a normal distribution were expressed as the mean ± standard deviation, while data that were not normally distributed were expressed as the median (interquartile range). The paired sample t-test was used to compare pretreatment and posttreatment values for hormonal and biochemical data with homogenic variability. The Wilcoxon signed-rank test was used to analyze data with skew distribution. 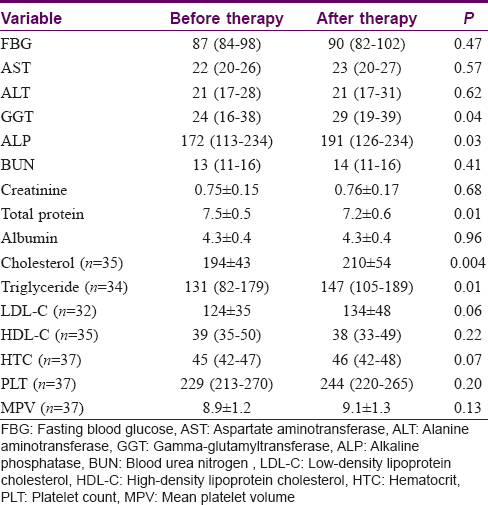 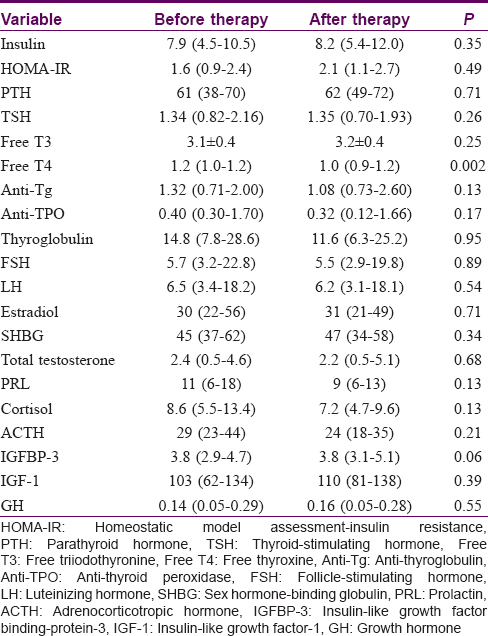 The present study found a significant decrease in free T4 levels after acitretin therapy; however, there was no significant change in other pituitary hormone levels.

There are also studies examining the effects of other agents used in the treatment of psoriasis on pituitary hormone levels. A previous study investigated the effects of phototherapy, hydroxyurea, cyclosporine-A and acitretin therapy, all used in the treatment of psoriasis on somatotropic axis hormone levels.[11] The authors reported that not all therapies resulted in a significant change in growth hormone concentrations in active and remission phases of the disease; however, insulin-like growth factor binding-protein-3 levels were significantly higher in the phototherapy group, and insulin-like growth factor-1 levels were higher in the cyclosporine-A group during remission. Also, acitretin therapy did not cause significant changes in somatotropic axis hormones, similar to what we found in the present study.

The limitations of this study were a retrospective nature, inability to retest blood samples of 7 patients at 3 months post treatment onset, low dose and short duration of acitretin treatment. These limitations could have led to false negative results.