Background : Renal itch is a relatively common and distressing problem for patients with chronic renal failure. Granisetron, is a potent and selective inhibitor of 5-HT3 receptors. There have been some studies about the effect of ondansetron in uremic pruritus and one case report has recently described relief of renal itch with granisetron. Aims : To evaluate the effect of Granisetron on uremic pruritus in Continuous Ambulatory Peritoneal Dialysis (CAPD) and Hemodialysis (HD) patients. Methods: To study the prevalence of uremic pruritus, patients on CAPD and HD were asked to complete a pruritus questionnaire.Their replies were scored based on numerical scales. Pruritus was graded, according to the total points for each patient, as mild, moderate or severe. Fourteen patients with moderate to severe pruritus were enrolled in the trial. During treatment, patients received granisetron (1 mg tablet twice a day P.O), for a period of 1 month. They were asked to score the severity of pruritus twice a day. Results : Seventy seven percent of the patients responded to the treatment and at 1 st , 2 nd and 4 th week the mean values of the pruritus scores were 23, 16 and 8 points respectively. Before starting treatment the score was 31 points ( P =0.03). Weekly clinical and laboratory examination showed no important side effects. Conclusion : Granisetron might be an effective, safe and well tolerated drug for the treatment of uremic pruritus.
Keywords: Continuous Ambulatory Peritoneal Dialysis, Granisetron, Hemodialysis, Uremic pruritus 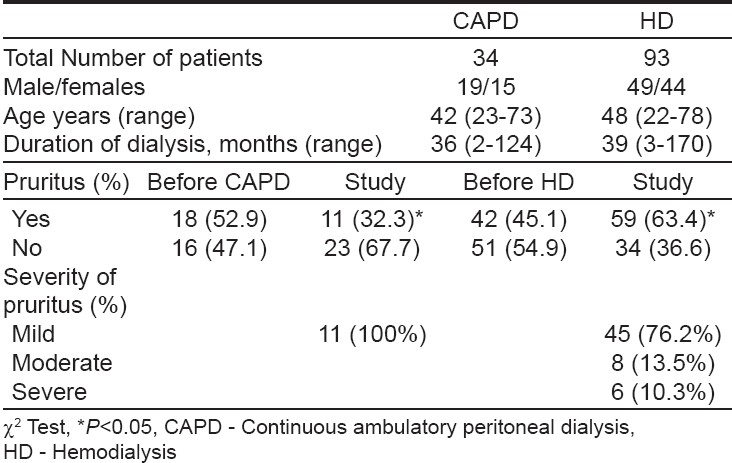 Table 2: Prevalence and severity of pruritus before study

Table 2: Prevalence and severity of pruritus before study

Itching is perceived by patients as a severe and distressing symptom of renal disease. [1] Although it is not life-threatening, it affects the quality of life. Its prevalence among uremic patients ranges from 25 to 90%. [2] The etiology of uremic pruritus remains unknown and its treatment is mostly unsatisfactory. Serotonin has been reported to be a mediator of uremic pruritus. [3],[4] 5-HT3 receptor antagonists, especially ondansetron, have been used for uremic pruritus with varying success in several case reports [5],[6] and clinical trials. [7],[8],[9],[10]

Recently, Albares et al. reported dramatic improvement in uremic pruritus with granisetron in a patient on hemodialysis. [11] Granisetron is a potent and highly selective 5-HT3 receptor antagonist that has little or no affinity for other 5-HT, dopaminergic, adrenergic, benzodiazepine, histamine or opioid receptors. [12] It was originally developed for the relief of chemotherapy-induced nausea and vomiting. It is mainly metabolized by the liver and is therefore, safe for use in renal failure. Data also suggests that it has a good safety profile and minimal potential for drug-drug interactions. [13] In view of these properties of granisetron, we performed an open uncontrolled study to assess objectively the safety and efficacy of granisetron in patients with moderate to severe uremic pruritus.

With the approval of the local ethical committee, all patients undergoing Continuous Ambulatory Peritoneal Dialysis (CAPD) or Hemodialysis (HD) at our dialysis units in Qaem and Imam Reza Hospitals were asked to complete a questionnaire about pruritus and dry skin, before the initiation of dialysis and at the time of the study. Patients on CAPD or HD with a history of pruritus for more than 6 weeks were considered for inclusion. Patients were excluded if they had concomitant dermatological disease associated with pruritus, as assessed by a dermatologist or another metabolic cause of itch or a history of poor compliance.

Ninety three of 100 patients on HD and 34 of 39 patients on CAPD responded to the questionnaire. The measurement of pruritus was done and patients with moderate to severe pruritus who did not respond to antipruritic treatment with an antihistaminic (hydroxyzine) were invited to take part in the trial. Because CAPD patients had either mild or no pruritus, only 14 patients on HD were treated with granisetron. Granisetron was administered after a washout period of 2 weeks, with a dosage of 1 mg twice daily P.O. for a duration of 1 month. The patients treated with granisetron were asked to complete a questionnaire about their pruritus before the initiation of treatment and on the 1 st , 3 rd , 5 th and 7 th day of treatment and thereafter every week up to one month. The results were summarized and statistical analysis of the responses was done by c 2 test and repeated measurement tests. Data was expressed as mean values ± SD and the difference was considered significant when P < 0.05.

We measured the severity of pruritus using a method based on the one proposed by Duo [14] and modified by Mettang et al. [15] This method is based on criteria including scratching, severity, frequency and distribution of pruritus, number of sleeping hours and frequency of waking up during the night for scratching. A single investigator who did not know the patients, their biochemical results and which patients had received granisetron, evaluated the replies to the questionnaire. The replies were scored as follows: (a) For each reported period (morning: the time from getting up until noon; afternoon: the time from noon until going to bed and night) with pruritus we allotted 1 point, with a maximum of 3 points (pruritus during all three periods). (b) In the scoring of severity, pruritus without the need to scratch received 1 point, a few times of scratching: 2 points, frequent scratching: 3 points, scratching without relief of pruritus: 4 points and total restlessness pruritus: 5points. (c) In the scoring of distribution, each location (arms, legs or trunk) received 1 point and if generalized (all over the body) pruritus was present, 5 points. (d) Frequency was judged by the number of pruritus episodes and their duration. Every two short episodes (< 10 min) or one long episode (≥10 min) received 1 point, with a maximum of 5 points for ten or more short episodes or for five or more long episodes. (e) The patients were asked to write down the number of sleeping hours and the frequency of arousal from sleep during the night because of itching. Absence of sleep received 10 points and 7 or more hours of sleeping got 0 points. Other points could be scored by the deduction of the number of sleeping hours from 10. In the scoring of sleeping disturbance, each episode of awakening due to pruritus received 1 point, with a maximum of 5 points for five or more episodes. For severity, distribution and frequency, separate scores were recorded for the morning and afternoon. Thus, as [Table - 1] shows, the highest possible score for a 24-hour period was 48 points, equally distributed (16/48, 33.3%) between the three periods of the day. Pruritus was graded, according to the total points for each patient, as mild (1-16 points), moderate (17-32 points) and severe (33-48 points) [Table - 1].

Because CAPD patients had either mild or no pruritus, only the moderate to severe cases on HD were treated with granisetron. In this group we observed significant improvement of the sense of pruritus and its severity decreased from 1 st week of starting treatment. The decrease in the severity of pruritus up to 4 th week of study is shown in [Table - 3]. There was a progressive decrease in severity of pruritus with disappearance of the symptoms in 7 patients and a change to mild pruritus in 3 patients, at the end of the 4 th week, without reoccurrence during the study. Weekly clinical and laboratory evaluations showed no important side effects or other abnormalities [Table - 4]. Granisetron was well tolerated, only with mild and transient side effects. Two patients (14.2%) experienced headache and one constipation (7.1%). But, no one discontinued the treatment protocol.

Pruritus is one of the most common cutaneous manifestations of end stage renal disease and in those on dialysis, both on CAPD or HD. Our data, showed a high prevalence of pruritus among patients on HD (63.4%) with a lower rate in CAPD (32.3%), which are in agreement with earlier reports and clinical trials. [15],[16],[17],[18],[19],[20] Comparing the prevalence and severity scores of pruritus significant difference between CAPD and HD patients is revealed, which is in disagreement with other similar studies. [15],[16],[21]

The etiology and pathophysiology of uremic pruritus remains obscure and pruritus is possibly multifactorial. Histamine, in combination with other factors, may have an important role in the pathogenesis of uremic pruritus [3],[4],[15],[23],[24] but this has not been confirmed in other studies. [15],[24] In our study there was no difference in laboratory parameters between the groups with and without pruritus and we can not attribute presence and severity of pruritus to uremic and nutritional state, homeostasis of divalent ions, parathyroid hormone or dose and quality of dialysis.

Serotonin, in experimental studies, produced pruritus when it was injected together with prostaglandins [25] and it was suggested indirectly that it has a role in the appearance of uremic pruritus. Moreover, ketotifen, and ondansetron have been effective in the management of pruritus in some uremic patients. [3],[4],[5],[6],[7],[8],[9],[10]

Granisetron is a potent and highly selective inhibitor of 5-HT3 receptors both in the peripheral and central neural system and it is a widely used drug for the management of nausea and vomiting during cytotoxic chemotherapy and radiotherapy. This drug is primarily metabolized by CYP3A enzymes and does not influence or inhibit any other CYP enzymes. [26] While the possibility exists for granisetron to interact with co prescribed drugs that affect CYP3A, to date, no drug interactions have been reported with granisetron [26] and no dose adjustment is recommended for renally impaired patients. [27]

We administered granisetron at a low dose (1 mg twice daily) for the management of uremic pruritus in HD patients. Our results were satisfactory since the severity of pruritus decreased progressively and it finally disappeared in 7 patients at the end of the 4 th week without any side effects or complications. The beneficial effect of granisetron, a potent anti-serotonin drug, in the management of pruritus strengthens the claim that serotonin itself or in combination with histamine and/or other factors has a crucial role in the pathophysiology of uremic patients.

This study confirms the high prevalence of pruritus among patients on HD dialysis compared to CAPD with significant difference between treatment modalities. Pruritus increases significantly after the initiation of dialysis. Pruritus and its severity do not correlate with epidemiological, hematological and biochemical parameters. Although these preliminary results of the efficacy of granisetron in uremic pruritus were interesting and it was well-tolerated, a double blind randomized controlled study is required to establish further the efficacy of granisetron in the treatment of uremic pruritus.