Efficacy and safety of 0.1% kinetin cream in the treatment of photoaging skin

Background: Kinetin is a plant-derived compound, which is reported to possess antiaging properties. It has been used in a topical cream to manage facial photo-damage and aging. Although studies elsewhere have shown its benefits, not many studies of the effects of kinetin in Asian skin are available. Objectives: To assess the efficacy and tolerability of 0.1% kinetin cream in the treatment of facial photo-aging. Methods: The study was designed to be open-label and single-blinded, without a control group. One hundred Thai female and male subjects with mild, moderate or severe facial photo-damage were enrolled. They were asked to apply 0.1% kinetin cream twice daily for 12 weeks and follow up at 4, 8, and 12 weeks. Subjective patient self-assessment and physician assessment of facial skin photo-damage were accompanied by digital photographic analysis using the VISIA® (Canfield Scientific Inc, Fairfield, NJ) imaging system. Results: At baseline, most patients reported moderate skin changes related to photo-damage, skin texture, skin color and wrinkles. After 12 weeks, physician and patient assessments showed slight but statistically significant improvements in overall skin condition, skin texture, color, and wrinkles. Findings were similar with the digital photographic system analysis, especially in relation to skin color. Facial ultraviolet spots and redness also showed statistically significant improvements after 12 weeks. The treatment was generally well tolerated. Limitations: The study was designed to be pragmatic and hence no randomization was carried out; there were also no intrapatient or interpatient control observations, and no comparison arm. Conclusion: Kinetin (0.1%) cream was found to slightly improve cutaneous facial photo-damage after 12 weeks of use in a group of Thai patients.
Keywords: Kinetin, photoaging, skin

Kinetin (N6-furfuryladenine) is a plant growth factor that reduces senescence in plants. [3] It was discovered to have anti-aging effects on human skin in preclinical studies, delaying the onset and reducing the magnitude of several morphological and biochemical changes in cells. [3] Clinical studies on the efficacy of kinetin in improving signs of facial photo-damage have also been subsequently carried out, [4],[5] but we found is only one published clinical trial of its use in Asian patients. [6]

The objective of this study was to assess the efficacy and tolerability of 0.1% kinetin cream in the treatment of facial photoaging in Thai subjects.

This was an open-label, single arm clinical trial carried out at a single centre in Bangkok, Thailand between December 2012 and April 2013 (12 weeks). The protocol was reviewed and approved by the Ethical Review Committee for Research in Human Subjects, Ministry of Public Health, Thailand. Informed consent was obtained from the subjects before their inclusion, and subjects whose photographs have been used in this report have signed a photo release form.

The study was designed to be open-label and single-blinded, without a control group. A total of 100 Thai female and male subjects aged 35-65 years with mild, moderate or severe facial photo-damage were enrolled consecutively. All were examined by the same board-certified dermatologist and categorized by Fitzpatrick skin type. Subjects with the following conditions were excluded: pregnancy or lactation, suspected porphyria, systemic or cutaneous lupus erythematosus, facial skin cancer, chronic or recurring skin disease, and any active skin infection. In addition, subjects who had received the following treatments were excluded: laser, IPL, or chemical peel in the preceding 2 months, oral isotretinoin in 6 months, topical retinoids in 2 months or topical alpha-hydroxy acid skin care products in the preceding month, as well as those using anti-aging products. These treatments were also not allowed during the study period.

Subjects were advised to apply a pea-sized amount of 0.1% kinetin cream (Kinerase®, Menarini Inc., Florence, Italy) on the face and neck twice daily for 12 weeks after the baseline assessment. Facial photo-damage was graded by the same dermatologist on a 10-point subjective scale, as well as by the VISIA® digital evaluation system. A 10-point scale was also used by subjects to assess baseline parameters. Both subjects and the dermatologist evaluated the overall skin condition, skin texture (roughness), color (pigmentation) and wrinkles at baseline as well as at all study visits. At weeks 4, 8 and 12, subjects evaluated improvement in each parameter on a 6-point scale while dermatologist assessment was done with the 10-point scale. The facial photo-damage was graded by the same dermatologist at every visit.

Intention-to-treat analysis was performed for efficacy and safety variables. A comparison between skin condition at baseline and after treatment was performed. A paired t-test was conducted to determine within-group differences (baseline/week 4 vs. week 12).

The mean age of study participants was 41.99 ± 5.62 and a majority (92%) were females. All subjects completed the study protocol and attended every follow-up visit. Approximately half (48%) of the subjects had a combination skin type, while 24%, 16%, 4%, 5%, and 3% had dry, oily, normal, sensitive and acne-prone skin respectively.

At baseline, 23-51% of the patients reported a moderate rating on all skin parameters measured [Table - 1]. Between weeks 4 and 12, the majority reported slight improvements that were statistically significant in all parameters: overall skin condition, skin texture, skin color, and wrinkles (P < 0.001, P = 0.014, P < 0.001, and P < 0.001, respectively) [Table - 2]. There was also an increase in the percentage of patients reporting at least 25% improvement in all four paramenters [Figure - 1]. Wrinkling was assessed by patients to have improved the most, the mean wrinkle improvement was 0.54 (P < 0.001) [Figure - 2]a and b. 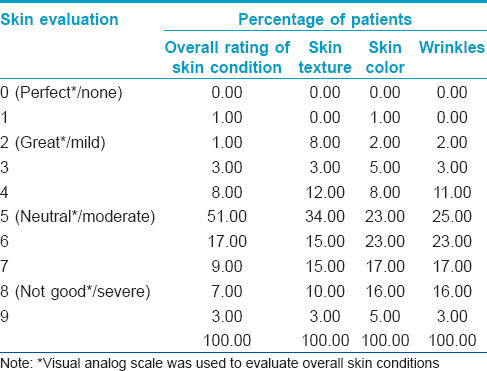 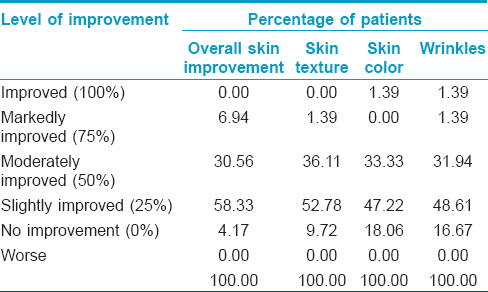 Table 2: Patient self-evaluation of improvement of skin condition at week 12

The 0.1% kinetin cream was well tolerated by subjects throughout the study period as shown by a steady decrease in the frequency of reported skin irritation from week 0 to week 12 [Figure - 5] and [Figure - 6]a and b.

Kinetin has been used in the cosmetic industry as an anti-aging agent for many years. [7] Topical treatment with kinetin was found to normalize hyperpigmentation and improve the aged skin structure of hairless dogs. [8] Several clinical studies in humans have demonstrated the efficacy of kinetin in improving signs of facial photo-damage. [3],[5],[6] An initial clinical study on 32 patients with mild-to-moderate facial photo-damage showed improvement in wrinkles, roughness and hyperpigmentation with 24 weeks of treatment with kinetin. [4] Similar results were seen in another study in a group of 18 patients with photoaging. [5] Both studies used subjective assessment scales similar to ours, as as also objective measurements such as the VISIA® digital evaluation system, the DermaScan™ (Cortex Technology, Denmark) and an evaporimeter. [3],[5]

The only published clinical trial on the use of kinetin in Asians was carried out in Taiwan, comparing the clinical anti-aging effects of a combination of kinetin and niacinamide with niacinamide alone. Study endpoints included subjective assessments, measurement of facial skin elasticity, skin corneal moisture, skin melanin and erythema indices, and spot measurements through the VISIA® imaging system. [6] Persistent and significant reductions in spot, pore, wrinkle, and evenness counts were found at weeks 8 and 12 in group 1. A significant increase in corneal hydration status was also evident at week 12, whereas persistent decrease in erythema index were apparent at 8 and 12 weeks. In group 2, significant reductions in pore and evenness counts at week 8 and wrinkle counts at week 12 were noted. Although well-conducted with a randomized, double-blind, placebo-controlled, split-face study design, this study was based on a combination of kinetin and niacinamide.

Our results complement those of the above studies, and also support evidence that kinetin may help restore normal skin barrier function after 12-24 weeks of application. [3]

A majority of the subjects in this study reported slight improvements, unlike in one of the other studies, [5] wherein most subjects reported no improvement in skin color and fine wrinkles at week 12. This may be due to subjects in different cultures having different expectations for improvements with treatment. The higher number of patients in this study in comparison to their 18 patients could be another contributing factor to this difference.

The findings of the VISIA digital analysis did not completely match patient and physician evaluations in the present study, probably due to the subjective nature of the assessment scales used. However, there also were some similarities in the subjective and objective observations. The VISIA® results showed significant reductions in facial UV spots and redness from week 0 to week 12 that could be correlated with subjective improvement in facial skin color or pigmentation. The non-significant improvement of wrinkles noted on the VISIA® system was similar to findings in one of the previous studies [5] and may be due to VISIA®′s lower sensitivity in detecting changes in wrinkles. The 0.1% kinetin cream was well tolerated in our study, as indicated by the reduction in the number of patients reporting skin irritation over the study period. This was similar to studies in other populations [3],[5],[6] and demonstrates that kinetin does not cause skin irritation commonly associated with topical retinoids. [9]

There are several limitations in this study. Since it was designed to be pragmatic, there was no randomization. It was open-label and single-blinded without a control group; there were no intrapatient control observations either. Patient and physician assessments were subjective. A larger sample size could also have provided stronger results on VISIA® evaluation. In addition, the improvements in skin color noted could be due to other factors such as staying indoors or using sunscreen. However, we believe that the study does provide some evidence of the efficacy of 0.1% kinetin cream in photoaging in a Thai population.

This research project was supported by the Faculty of Medicine, Siriraj Hospital, Mahidol University and Menarini (Thailand). The authors wish to thank Ms. Praveen Reginald from Veras Research for her assistance in editing and revising this manuscript and Ms. Phassara Klamsawat and Ms. Phonsuk Yamlexnoi for their assistance in recruiting subjects for the study and managing the database.