We describe a case of basidiobolomycosis in a 2½-year-old boy who presented to the out-patient department of Lok Nayak Hospital, Delhi, with a gradually progressive skin colored swelling over the left buttock and upper thigh of 6 months duration. The patient had received an intramuscular injection of penicillin at the same site, 10 days prior to the onset of the swelling. Therefore, a diagnosis of injection abscess was made and incision and drainage was done, but the swelling reappeared and progressed gradually. The patient was given anti-tubercular treatment for 2 months and ketoconazole for 3 weeks without any improvement.

Physical examination revealed a subcutaneous swelling measuring 20 cm × 15 cm [Figure - 1]a with a nodular consistency and “woody” induration; fingers could be insinuated below the swelling. The inguinal lymph nodes were enlarged and there was swelling of the scrotum and the shaft of the penis which resembled a “saxophone” penis [Figure - 1]b.

Routine laboratory investigations (including serology for HIV 1 and 2) were normal. Fine needle aspiration cytology from the enlarged inguinal lymph node showed reactive hyperplasia. Skin biopsy from the swelling over the buttock revealed granulomas composed of epithelioid cells and multinucleated giant cells, numerous eosinophils admixed with neutrophils forming microabscesses and broad aspeptate hyphae with scanty cytoplasm appearing as tube-like structures, a few seen inside multinucleate giant cells [Figure - 2]. Findings were highlighted with periodic acid-Schiff (PAS) staining. Fungal culture on Sabouraud dextrose agar and culture for Mycobacterium tuberculosis did not yield any growth. Magnetic resonance imaging scan of the region showed abnormally increased enhancement of the left gluteus maximus muscle and the subcutaneous tissue, suggestive of myositis with bilateral lymphadenopathy. With a diagnosis of entomophthoromycosis, the child was treated with saturated solution of potassium iodide, five drops thrice daily that was increased gradually to nine drops thrice daily over a period of 3 weeks. There was a remarkable improvement with subsidence of genital swelling in a few days [Figure - 3]. The dose of saturated solution of potassium iodide was tapered following an increase in thyroid stimulating hormone levels and was stopped in 10 weeks.

Basidiobolomycosis tends to affect the limb girdle and buttocks in children, usually boys, and causes inflammatory infiltration of the subcutaneous tissue. The organism can be demonstrated histologically in the subcutaneous tissue. The diagnostic finding is the clusters of inflammatory cells and large, broad, aseptate, zygomatic hyphae that are accompanied by an eosinophilic sheath, the “Splendore-Hoeppli” phenomenon. In our patient, inability to grow the fungus in culture could be due to the prior intake of ketoconazole.

Our case had some interesting findings: the likely mode of entry was an intramuscular injection which is an uncommon route for this disease.[1] The enlargement of the scrotum (elephantiasis) is also a rarely reported finding, which has been noted rarely with chromoblastomycosis, but as elucidated in [Table - 1] was not seen with entomophthoromycosis (subcutaneous zygomycosis).[2],[3] This enlargement could be due to both mechanical compression of lymphatics by the fungal mass and actual invasion of lymph nodes by the fungus.[4] 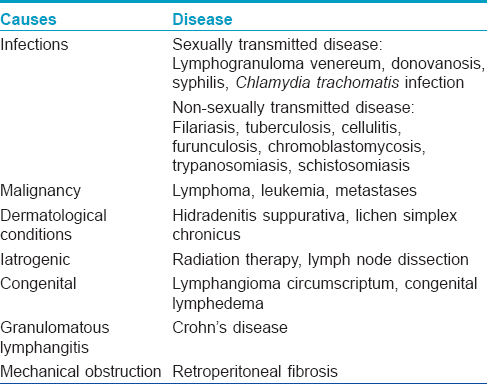 Entomophthoromycosis (subcutaneous zygomycosis) is a possible differential diagnosis of chronic subcutaneous swellings presenting with edema. Our case also highlights the importance of potassium iodide in the treatment of basidiobolomycosis with complications like elephantiasis, lymphadenopathy and myositis. We would like to recommend it as afirst line therapy in children presenting with this disorder.