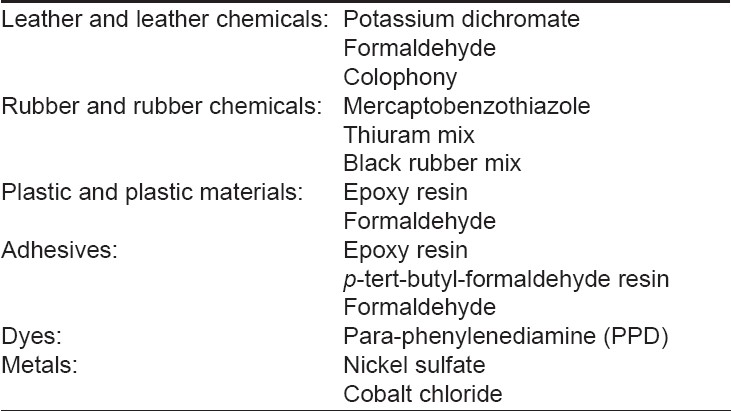 Footwear dermatitis represents a frequently occurring skin ailment in the dermatological practice in India. However, these dermatoses often remain undiagnosed and designated as other skin dermatoses such as eczema, psoriasis or dermatomycosis. It is often empirically diagnosed without pinpointing the contributory allergens by allergic patch testing. Footwear dermatitis is a major cause of recurrent plantar dermatitis. This forms a distinct group among all the contact dermatitis cases found in India. [1]

Indians use closed footwear (shoes) as well as open footwear (sandals), the latter being used more often. However, at present, shoes are considered as a fashion accessory. The design and materials used by manufacturers change constantly. It is difficult to assess the composition of any particular part of shoe. [2] A previous study [1] reported chromium to be the most common allergen to be responsible for 75% of shoe dermatitis cases reported in India. However, the most common sensitizers causing shoe dermatitis worldwide are rubber and rubber chemicals. [3] Hence, we undertook this study to observe the epidemio-allergological pattern of footwear dermatitis in India.

One hundred and fifty five cases with footwear dermatitis were included in this study during July 2005 to June 2006. Criteria for selection were those having exclusively feet dermatitis and those with predominantly feet dermatitis along with hand or other body surface area involvement and positive patch test reactions to standard shoe allergens with significant clinico-allergological correlation. The approval of the institutional ethical committee was obtained before starting the study.

Detailed history, particularly regarding use of footwear, was obtained and thorough clinical examination was performed. Written instructions were provided to patients about patch testing at our institute. After filling up the patient′s consent form, the patch test was performed using the conventional method [4] with the allergens of Indian Standard Battery (ISB), as recommended by Contact and Occupational Dermatoses Forum of India (CODFI).

Patch test units comprised 22 antigens in ointment form, two antigens in liquid form, plant allergens strip; aluminum patch-test chambers prefixed on a micropore tape and filter-paper discs. The test allergen strips were applied to the skin under occlusion for 2 days (48h). First reading was taken after 15-30 min on the removal of the occlusive strips to allow the transient erythema caused by the occlusive effects of allergens and plasters to subside. [5] The second reading was taken after 72h. The tested footwear allergens are shown in [Table - 1]. For practical and clinical purposes, the allergens can be grouped into different categories as shown in [Table - 2].

Those with feet dermatitis only were tested for footwear allergens with control. Others who had feet and the involvement of other areas were tested with the entire Indian Standard Battery (ISB) of allergens. Post patch-test counseling was employed and the results were clinicoallergologically correlated.

Statistical analysis of the data obtained from history, clinical features and allergological findings by correlation and follow-up was performed.

The percentages of the contributory allergens are shown in [Figure - 3]. Potassium dichromate and cobalt chloride were the commonest allergens. In our study paraphenylenediamine, epoxy resin and black rubber mix were also the common allergens. The frequency of the occurrence of different categories of footwear allergens is shown in [Table - 2]. Leather and leather-related chemicals have shown the highest frequency rate of 61.9% ( n=96).

Our series, to the best of our knowledge, represents the largest Indian series on footwear dermatitis. Footwear dermatitis represented a substantial proportion (24.22%) among the contact dermatitis cases presented at our institute. As the Indians commonly wear shoes and sandals on bare feet without socks, they are more susceptible to shoe allergy. Moreover, the quality control of shoe production in India is not satisfactory.

In the present study, potassium dichromate was found to be the commonest allergen, which corroborated the previous Indian works. [4],[5] In India, chrome-free leather is not much in use due to its nonavailability and high cost. At present, the leather used in India leads to more cases of footwear dermatitis than in western countries where rubber chemicals are the more common sensitizers. Cobalt chloride and black dyes were the next common allergens in that order of frequency. The presence of cobalt in shoe buckles and eyelets is becoming increasingly common now in designer footwear. Nickel is also present in shoe buckles, eyelets and as ornamental agents in designer footwear. In footwear dermatitis, hands are involved due to touching of the shoes, socks and buckles while wearing footwear and also due to id eruption. [1] In a similar manner, face and wrists may also be involved.

An Indian study by Bajaj et al. on one hundred and five patients with foot dermatitis over a period of 18 months showed a positive reaction in 47 cases to one or more allergens. The majority of cases (47) were chrome positive. Positivity to plastic material was observed in eight cases, whereas allergy to rubber and rubber-chemicals accounted for five cases. [6]

Black color is the preferred color in shoes and socks; hence, paraphenylenediamine is a common allergen even in our study. Saha et al. [7] has documented a case report of paraphenylenediamine sensitivity in footwear dermatitis. However, in our study we have found as many as 50 (32.25%) cases to be sensitive to paraphenylenediamine, thereby rendering it to be the third highest contributory allergen in footwear dermatitis. Epoxy resin and p -tert-butyl (PTB) formaldehyde resin were observed as common allergens. They are used as adhesives to make shoes because stitched shoes are not much in vogue now. In India, the poorer section of people still uses black rubber shoes. Thus, black rubber mix also happens to be one of the contributory allergens.

In another Indians study, Saha et al. showed potassium dichromate and colophony to be commonest sensitizers and they also recommended that there should be primary and secondary footwear screening series to detect the responsible allergens with the ultimate objective of providing correct nonallergenic footwear. [7]

In a study by Handa et al. , rubber chemicals were the commonest allergens detected in 26 patients; Dyes were detected in ten cases, leather in six cases, glues and neoprene cements in four cases and rubber material from suspected footwear as such in four patients. [8]

Bisphenol A has been found to be a positive allergen in footwear dermatitis. [9] Lynch and Rudolph [10] reported dermatitis from the Indian sandal strap. Another study showed that potassium dichromate, nickel sulfate and mercaptobenzothiazole were frequent sensitizers. The dorsum of the foot was the commonest site. [11]

Nowadays, females are exposed to a variety of designer footwear that matches with their wardrobes. Moreover, housewives are exposed to water, household detergents and cleansing agents that may cause irritant dermatitis of the feet resulting in impaired epidermal barrier function eventually leading to higher frequency of penetration by shoe allergens. This could be the reason of increase in the incidence of footwear dermatitis in females, particularly in housewives. The fifth decade is probably more susceptible due to asteatotic condition of the skin and impaired barrier function.

Pre- and post-patch-test clinicoallergological correlations have yielded significant clinical relevance in most of the above-mentioned cases. However, positive reactions due to the concomitant sensitivity to footwear as well as nonfootwear materials or only nonfootwear materials remain the possibility in some cases.