In 1969, Cherry et al. described the acute onset of hemangiomata-like lesions and high fever in 4 children, resolving after just a few days.[1] The papules appeared similar to hemangiomata.[2] Later, first adult cases of the disease were reported in 2000.[3],[4] Clinically, the lesions resemble angiomata. Histologically, because there is no vasculitis or vascular proliferation of blood vessels, in 1993, Prose et al. named the disease as eruptive pseudoangiomatosis (EP).[5] It overlaps with the entity known in Japan as erythema punctatum Higuchi, which is possibly caused by an insect named Culex pipiens pallens.[6] All the cases reported so far, regardless of the age of the patient, are from North America and Europe, with Korea and Japan being the only Asian countries having reported such cases so far.[7],[8] We are reporting a case series of 12 patients with this condition from a tertiary care hospital in Punjab.

Twelve patients presented to the dermatology outpatient department (OPD) of the Government Medical College and Rajindra Hospital, Patiala over a period of 40 days during March–April 2016 with eruption of 2–5 mm discrete, purpuric-looking but blanchable lesions [Figure - 1]. The lesions were moderately pruritic papules with a characteristic perilesional halo, distributed mainly on extremities [Figure - 2], face, neck and trunk.

Details of patients presenting to our OPD are tabulated in [Table - 1]. Six of our 12 patients, including two children, had reduced total leucocyte count and 9 had lymphocytosis. Other routine laboratory tests like liver function tests, renal function tests, blood sugar levels, and urine complete examination were normal. Histopathology of the lesions revealed normal epidermis with mild perivascular lymphohistiocytic infiltrate in papillary dermis [Figure - 3]a and [Figure - 3]b and dilated capillaries with prominent, plump endothelial cell lining [Figure - 3]c. 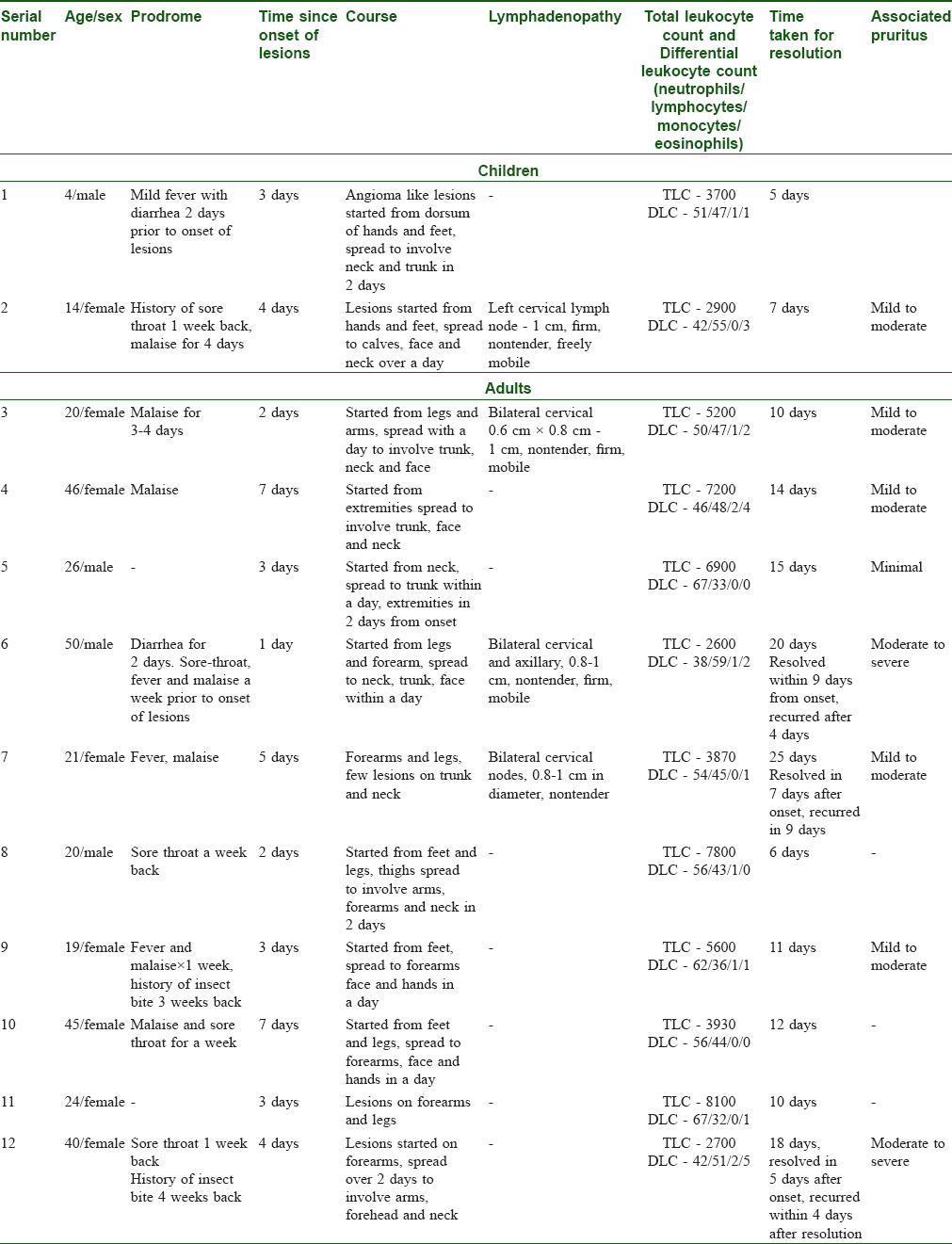 Table 1: Details of the patients

EP is a rare disease characterized by initial prodrome of mild fever, sore throat, or gastrointestinal symptoms, followed by the appearance of hemangiomata-like cutaneous lesions, resolving in a few days. This entity was first described by Cherry et al. in 1969 in four children with enteroviruses-enteric cytopathic human orphan (ECHO) virus infection.[1] They isolated ECHO virus 25 in 2 children and ECHO virus 32 in other 2. Biopsy was not done by them, however, they believed the disease to be a viral exanthem. In 1993, Prose et al. described a similar eruption of acute onset in 3 children but could not confirm its viral origin.[5] They biopsied a lesion from 1 patient, and reported dilation of the dermal vessels, endothelial projections, and a discrete perivascular infiltrate without vascular proliferation. In 2000, Navarro et al. reported the first adult case in a 37-year-old woman with clinical evidence of EBV infection.[3] The same year, Guillot et al. described 9 cases in adults and observed that adult females were more commonly affected than males and that eruption lasted longer in adults than that in children.[4]

In 2007, Barrio et al. described a series of 7 patients from Spain, 6 females and 1 male, over a period of 10 years from 1996 to 2005 having lesions compatible with EP. All their cases appeared in spring/summer and 6 cases relapsed.[6]

Three cases in middle-aged Korean women (50, 52 and 55 year old) were described by Jung and Kim in 2003. None of their patients complained of any acute illness. Only 1 had mild pruritus with seasonal recurrences in 3 consecutive autumns and 2 were asymptomatic. Biopsy findings common to all the three were a normal epidermis, upper dermal edema and lymphocytic infiltration around the telangiectatic capillaries, and extravasated erythrocytes in the patient with seasonal recurrences.[7]

[Table - 2] summarizes the previous case series/reports. This rare viral exanthem erupts as asymptomatic or slightly pruritic discrete cherry angioma-like tiny blanchable papules (1–4 mm) surrounded by a perilesional halo on the face, neck, extremities, and trunk.[6] The rash resolves without residual scarring in 2-18 days in children and 1–3 months in adults.[6] The halo may not be seen around spots on the face.[9] The eruptions may recur.[6]

The patients presented to us in the months of March/April 2016 (spring/summer in India).

Out of the 12 patients, 8 were females and 4 were males. Two of our patients were children (4 year-old male and 14 year-old female), and the remaining 10 were adults. Three of the 10 adult patients returned to us with recurrence of eruption within 1–2 weeks following complete resolution of the rash.

The etiology of this eruption is still unknown. Association with insect bites,[9] infection with ECHO virus E25 and E32, coxsackie B, Epstein-Barr virus, and cytomegalovirus [10] have been described in patients in whom eruption occurred after prodromal symptoms.[8] In 1965, Ohara et al. speculated that EP might be associated with mosquito bites, including bites by Culex pipiens pallens, which is similar to erythema punctatum Higuchi in Japan. In 2004, Ban et al. described 26 cases of EP-like lesions in hospitalized patients and attributed the lesions to mosquito bites.[8]

Recently, in 2016, Alcántara-Reifs et al. reported a case of a 73-year-old female with EP from Spain.[11] In 2013, Kim et al. conducted a clinicopathological study on 32 Korean patients with EP. Two of their patients developed lesions after outdoor activities. Two presented with simultaneous occurrence in family members. One patient reported having taken herbal medicine. No prodromal or systemic symptoms were observed by them.[12]

Seven of our patients gave a history of malaise, 4 had sore throat, and 1 gave a history of diarrhea preceding the onset of rash by 2–7 days. One male gave history of both diarrhea and sore throat along with fever, malaise and myalgia 7 days prior to onset of lesions. Two of our adult female patients, 19 years old and 40 years old, gave history of the development of eruption 3–4 weeks following mosquito bite and insect bite, respectively. In almost all, i.e., 11 patients, the rash started from the extremities and spread to involve the face, neck, and trunk over 2–3 days. Only 1 patient (26 years/male) reported having initial lesions on the neck and trunk. Three had cervical lymphadenopathy (2 adult females and 1 female child), and our 50-year-old male patient had cervical and axillary lymphadenopathy. Lymphadenopathy was appreciated in those who presented 3–4 days after the onset of lesions.

Histological findings show dilated dermal blood vessels with plump endothelial cells protruding into the lumen and mild-to-moderate perivascular lymphohistiocytic infiltrates.[13] The epidermis is generally unaffected and there is no evidence of vascular proliferation; these findings justify the disease being named as “eruptive pseudoangiomatosis,” by Prose et al.[5]

The clinical features and histological findings in our patients were consistent with those described for EP.

Viral exanthema, papular urticaria, and leukocytoclastic vasculitis were considered in the differential diagnosis. Papular urticaria, a hypersensitivity reaction to insect bites commonly seen in children, shows mild acanthosis and spongiosis, exocytosis of lymphocytes, mild subepidermal edema, extravasation of erythrocytes, moderate superficial and deep mixed inflammatory infiltrate and interstitial eosinophils.[14] Papular urticaria mostly appears as crops of very itchy red papules whereas lesions of EP can be asymptomatic or mild-to-moderately itchy, rarely associated with severe pruritus. Leukocytoclastic vasculitis presents as palpable purpura, which is defined histologically as a predominantly neutrophilic perivascular infiltrate effecting cutaneous post capillary venules with fibrinoid deposits in and around the vessel wall, endothelial swelling, leukocytoclasis (destruction of polymorphonuclear leukocytes with the formation of nuclear dust), and extravasations of red blood cells.[15] Common patterns of viral exanthemata include a superficial perivascular infiltrate of lymphocytes without associated epidermal changes, a superficial vacuolar interface dermatitis, which is sometimes associated with eosinophils and neutrophils, a lichenoid dermatitis, and a mild spongiotic dermatitis.[16] Some viral exanthemata can be recognized by distinctive changes, such as ballooning and multinucleated keratocytes in measles and keratocytes with steel-gray nuclei and margination of nucleoplasm in infections by herpesviruses.[17],[18] The clinical finding of perilesional halos and plump endothelial cells with perivascular lymphohistiocytic infiltrate without vascular proliferation or vasculitis on histology is unique to EP.

EP is a rarely reported entity, and the precise cause of the vascular changes is still unclear. Previous studies have suggested it to be a “dermal hypersensitivity reaction” to viral infection or a direct viral effect on the vascular endothelium.[1]

No specific treatment is required for EP. Oral antihistamines and topical steroids may be indicated in symptomatic cases, although they do not affect the disease duration.[12] Out of 12 patients in our study, 6 reported mild-to-moderate itching which improved with second generation antihistamines, and 2 (an adult male with widespread eruption and a female with predominant upper-limb and upper back involvement) had severe pruritus, which responded to sedative antihistamines and topical calamine lotion. None of our patients required topical steroids. Average time for resolution of lesions was 6 days in children and 14 days in adults.

No serological tests were performed to confirm viral etiology of the lesions.

This viral rash is being reported for the first time from the Indian subcontinent. EP is an entity defined by acute onset of multiple millet-sized asymptomatic-pruritic erythematous, discrete spots with a halo distributed mainly on exposed skin; the halo may not appear around the spots on the face. In adults, females are more commonly affected and the eruption lasts for more than 1 week, with recurrences being more common than in children. Though very rare, this benign, self-limiting exanthema should be considered as a differential diagnosis for various cutaneous eruptions, with which the concerned patients present to health care professionals. Cases of EP may not seek medical help because of benign nature of disease and spontaneous remission or may go unrecognized. It might an underreported entity and may be more cases will be reported once we start considering it as a differential for various exanthemas in India.