We would like to present a case of eruptive squamous cell carcinomas (SCC) associated with programmed cell death protein 1 (PD-1) inhibitors and propose topical corticosteroids as a possible first-line therapy. PD-1 inhibitors are immunotherapy agents used to treat metastatic melanoma and other malignancies. They inhibit homeostatic checks on the immune system and amplify T-cell-mediated tumor surveillance.[1] The immune activation is nonspecific and can cause autoimmune sequelae and dermatologic adverse events.[1] Nine cases have been reported in the literature describing a potential new dermatologic adverse event, the development of eruptive skin neoplasms months following treatment with PD-1 inhibitors. Eight developed eruptive keratoacanthomas[2],[3],[4],[5],[6] and one developed a mixed eruption of two keratoacanthomas/one actinic keratosis/two basal cell carcinomas/one SCC.[4] We have not found any prior reports associating PD-1 inhibitor use with eruptive SCC.

Our patient was an 83-year-old male with metastatic melanoma. He was initially treated with intravenous nivolumab 240 mg every 14 days for six doses. Though the patient completed this regimen in 10 weeks, he had not achieved an adequate response as determined by imaging, and was planned for four additional doses of combination therapy with ipilimumab (3 mg/kg) and nivolumab (1 mg/kg). The first dose of combination therapy was initiated 12 weeks following his first dose of nivolumab monotherapy. Four days later, he developed a morbilliform rash covering his upper body, mostly affecting his upper chest and upper arms and sparing the dorsal hands. There were no constitutional symptoms, derangements in renal or liver function or elevated eosinophil counts. Due to the degree of body surface area affected, immunotherapy was discontinued and an oral prednisone taper was started at 50 mg daily, tapering by 5 mg every 3 days. The rash quickly resolved. However, around the time when the taper reached 10 mg, numerous hyperkeratotic papules and nodules suddenly erupted over his extensor forearms and dorsal hands [Figure - 1]. At this point it had been about 4 months since he received his first dose of nivolumab. Initially, four representative lesions were sampled and histopathology revealed atypical squamous proliferations with variable-sized islands of keratinocytes with increased nuclear-to-cytoplasm ratios and a scattered dermal lichenoid infiltrate composed largely of lymphocytes, which was consistent with invasive well-differentiated SCC [Figure - 2]a,[Figure - 2]b,[Figure - 2]c. The prednisone taper was completed, and his new lesions were treated with triamcinolone 0.1% ointment to be applied twice daily. After two months the lesions resolved completely except for two remaining nodules [Figure - 3]. The nodules were biopsied and curetted, with histopathology again consistent with invasive well-differentiated SCC. Curetted sites were healing well at 2-week and 1-month follow-ups with no signs of recurrence. Immunotherapy was never restarted after his first dose of combination therapy as his metastatic lesions remained stable or improved since the onset of his adverse events. 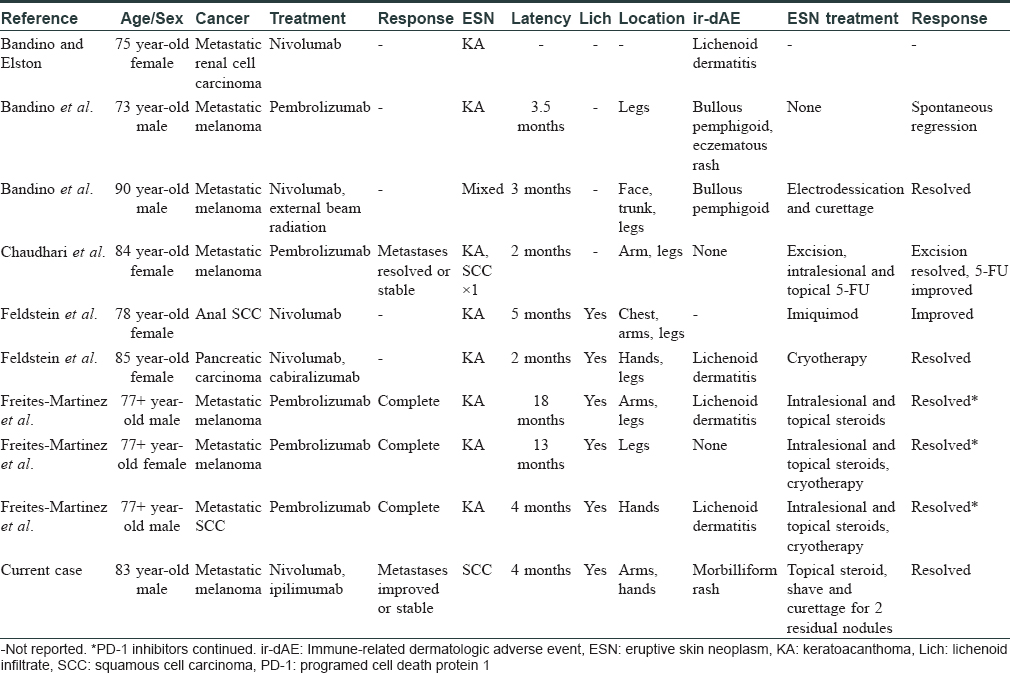 Eight of the nine cases from the literature showed good response to treatment. One patient improved on topical and intralesional 5-FU[3] and one improved on imiquimod.[5] Two saw complete resolution with destructive methods alone with no recurrence or new lesions at follow-up,[4],[5] and one resolved spontaneously without intervention.[4] All five of these patients had PD-1 inhibitors discontinued. However, the patient treated with 5-FU continued to develop new lesions. Freites-Martinez et al. reported the three remaining patients, the only patients in whom PD-1 inhibitors were continued.[2] Lesions in these three completely resolved with topical and/or intralesional corticosteroids alone or in combination with cryotherapy.[2] For our patient, PD-1 inhibitors were discontinued and the lesions almost completely resolved with topical corticosteroids alone. The excellent response to corticosteroids in our patient as well as that of the three patients of Freites-Martinez et al. is interesting to note.[2]

Eruptive skin neoplasms associated with PD-1 inhibitors have been postulated to arise primarily due to increased inflammation.[2],[3],[5],[6] PD-1 inhibitor use causes an increase in inflammatory cytokines, which can act as growth factors for sub-clinically damaged keratinocytes already predisposed to proliferate irregularly. Feldstein et al. compared this phenomenon to keratoacanthomatous proliferations arising in lichenoid dermatitis such as verrucous lupus erythematosus or hypertrophic lichen planus.[5] Interestingly, in all five eruptive skin neoplasm cases from the literature that commented on histology, a lichenoid infiltrate was found on biopsy. Our patient's biopsies also demonstrated lichenoid infiltrates.

This “inflammatory hypothesis” is consistent with the observation that when topical and intralesional corticosteroids are used, the eruptive skin neoplasms recede, presumably because the inflammation and therefore the primary proliferative stimulus is neutralized. Skin neoplasms arising under normal circumstances would be expected to worsen in the setting of immunosuppressive agents such as corticosteroids. However, the eruptive skin neoplasms associated with PD-1 inhibitors may be a distinct entity, perhaps a less advanced form of skin neoplasm that is unable to undergo full malignant transformation without a sustained outside stimulus, such as the inflammatory milieu caused by PD-1 inhibitors.

Induction of immune-related dermatologic adverse events, particularly vitiligo, morbilliform rash, lichenoid dermatitis, or pruritus is associated with improved responses to PD-1 inhibition.[2],[8] Eruptive skin neoplasms might similarly serve as a favorable prognostic indicator for the original malignancy that the PD-1 inhibitor was indicated for, as they were seen in the setting of a known immune-related dermatologic adverse event in six of the nine eruptive skin neoplasm cases from the literature. Our patient also developed a morbilliform rash that was likely due to immunotherapy given the morphology, lack of other triggering agents in the patient's history, and its resolution following discontinuation of immunotherapy. However, it is unclear whether nivolumab or combination therapy triggered it. Four of the eruptive skin neoplasm cases from the literature commented on outcomes for the primary malignancy and three completely responded while one had stabilized metastases. Our eruptive SCC patient also responded well, with stabilized or improved metastases.

Eruptive skin neoplasms, including eruptive SCC, are a potential new immune-related dermatologic adverse event associated with the use of PD-1 inhibitors. Treatment with destructive methods may be impractical due to the sheer number of lesions. We propose that topical corticosteroids be considered a potential first-line treatment option for these lesions given the number of responders in the literature and the overall favorable side-effect profile of this therapy. Intralesional corticosteroids and destructive modalities can also be considered for isolated lesions that prove recalcitrant to topical therapy. Prognosis is favorable and the lesions themselves may portend a good prognosis for the original malignancy.

The authors certify that they have obtained all appropriate patient consent forms. In the form, the patient has given his consent for his images and other clinical information to be reported in the journal. The patient understands that name and initials will not be published and due effort will be made to conceal identity, but anonymity cannot be guaranteed.