Globally, an estimated 33.4 million people are currently living with human immunodeficiency virus (HIV) infection, the proportion of women being slightly less than 52 percent. Although HIV prevalence in India is low, it is among the seven countries in Asia which account for more than 90% of people living with HIV infection, due to it being the second most populous country in the world.[1]

Cervical cancer and its precursors are the most important gynecological consequences of HIV infection. Among women with HIV infection in the United States of America, a relative risk of 5.4 for cervical cancer has been found as compared to the general population.[2] In India, cancer of the cervix constitutes about 15–51% of all cancers in women and rates of age-standardized incidence range from 17.2 to 55/100,000 women.[3]

This cross-sectional study was performed at the sexually transmitted infection clinic of Guru Teg Bahadur Hospital, New Delhi, India. Forty consecutive HIV-positive and 35 high-risk HIV-negative sexually active women, aged between 18 and 45 years, attending the clinic between November 2011 and April 2013 and consenting to be a part of the study were included. Women at “high risk” were those reporting any of the following: reporting multiple sexual partners, sex with a person having multiple sexual partners, anal intercourse or any sexually transmitted infection. Patients who presented with ulcerations were sampled for cytology after treatment of the ulcers. The study was approved by the Institutional Research Ethics Committee.

The baseline characteristics and sociodemographic information of the examined cohort (n = 75 women) are presented in [Table - 1] and [Table - 2]. Most of the patients (40%) belonged to the 30–39 years age group. 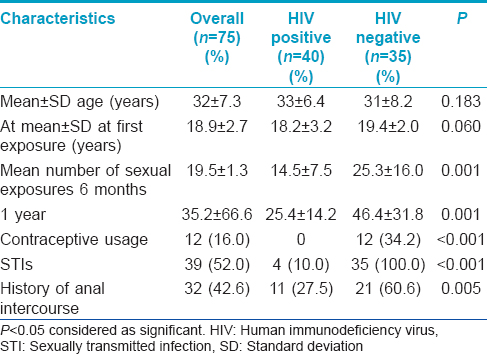 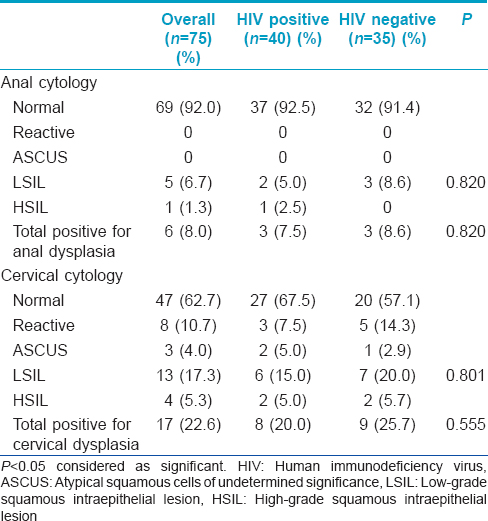 Abnormal cervical cytology was observed in 28 (37.3%) and cervical dysplasia in 17 (22.6%) of the study subjects. Various studies have reported that the prevalence of dysplastic changes range between 5% and 34% among HIV-positive women and 9–43.5% in HIV-negative women.[26],[27],[28],[29] The data from our study lies in between these ranges. However, a much higher prevalence of cervical dysplasia in HIV-positive as compared to HIV-negative women has been reported in studies which have recruited HIV-positive women from antiretroviral therapy clinics and HIV-negative women from gynecology outpatient departments.[11],[28] Our study failed to reproduce these results, which could be attributed to the presence of sexually transmitted infections in all the HIV-negative patients, due to their direct recruitment from the sexually transmitted infection clinic, whereas only 10% of the HIV-positive patients had these. This emphasizes the need for screening of dysplasia in sexually transmitted infection patients, irrespective of HIV status.

Our study suffered from some limitations such as a small sample size, lack of correlation with histological findings and recruitment of the study population from a sexually transmitted infection clinic, thereby creating a bias.