Evaluation of efficacy and safety of intralesional bleomycin in the treatment of common warts: Results of a pilot study

Background: This study evaluated the efficacy and safety of intralesional bleomycin in the treatment of common warts in 50 (32 men, 18 women) patients aged between 14 and 80 (mean ± SD, 28.5 ± 13.27) years.
Methods: The warts were present over dorsal hands, feet, palms, soles and periungual skin for 1 month to 10 years. They were infiltrated with bleomycin (1 mg/ml) till blanching. The total cumulative dose did not exceed 2 mg in one session. The treatment was repeated after paring of eschar at 2 weeks in case there was no or partial response. The patients were reviewed at 4, 12 and 24 weeks for cure, adverse effects or recurrences and outcome satisfaction levels.
Results: Complete cure without recurrence occurred in 40 (80%) patients and partial response occurred in 7 (14%) patients at the end of the 24-week study period. Three patients did not complete follow-up. No major systemic or local adverse effects other than injection site pain for 2–3 days were noted. All cured patients were very satisfied (Likert scale 5).
Conclusion: Intralesional bleomycin appears to be an effective and safe treatment for common warts including palmoplantar and periungual warts. It carries the advantage of low dose, no significant adverse effects and high patient satisfaction. Small number of patients, lack of a control group, comparing different bleomycin concentrations and a short follow-up are a few limitations of this study. Better designed studies are warranted for this useful treatment modality.

Common warts or verrucae vulgares are hyperkeratotic papillomas caused by human papilloma virus infection. They occur more frequently over hands of children and young adults, but may be located on any cutaneous or mucosal surface. Although spontaneous recovery is possible, it usually takes a long time, even years and remains unpredictable. However, some patients may not show any tendency toward spontaneous clearance and require active intervention. However, no single treatment has proved to have 100% efficacy and most therapies for common warts remain unsatisfactory. Treatment options include destructive or surgical procedures such as cauterization with salicylic acid, podophyllotoxin, trichloroacetic acid, formaldehyde, 5-flurouracil and photodynamic therapy. Surgical methods such as cryosurgery, laser ablation, electrocautery, and surgical excision are often painful, may cause scarring, have inconsistent results and recurrences are high especially in peirungual warts. Treatment with immune modulators such as contact sensitizers, imiquimod, intralesional interferons and oral levamisole, cimetidine or zinc sulfate has been tried with variable success.[1],[2],[3],[4] Immunotherapy using different antigens (autogenous vaccine, Candida antigen, mumps antigen, trichophytin skin test antigen, tuberculin, Bacille Calmette Guerin (BCG) vaccine, measles-mumps-rubella (MMR) vaccine, and Mycobacterium w vaccine) too has been used with variable outcome.[5],[6]

Bleomycin, an antibiotic derived from Streptomyces verticillus, selectively affects squamous cells and reticuloendothelial tissue. It inhibits DNA and protein synthesis, triggers apoptosis, causes acute tissue necrosis and stimulates an immune response.[1] Different methods such as intralesional, sublesional, perilesional and translesional multipuncture techniques for bleomycin delivery have been used with almost equal efficacy.[7],[8],[9],[10] In the translesional multipuncture technique, a frequently favored method, bleomycin is dropped over the wart and pricked into by using Monolet™ needle. The exact amount of bleomycin delivered into the lesions may vary as some amount of the drug remains over wart surface with resulting wastage, and this specialized needle is not widely available. Hence, we evaluated the efficacy and safety of intralesional bleomycin for treating common warts including palmoplantar and periungual warts which remain difficult to treat because of poor therapeutic response to other modalities.

After informed written consent, clinico-demographic details of participants were recorded and photographic records for warts made at baseline (before the treatment) and at each follow-up visit. The enrolled patients were advised not to use any other wart treatment during the study period. Laboratory investigations included complete hemogram and hepatorenal function tests before and at end of study.

Bleomycin powder for injection (15 mg vial) was dissolved in 5 ml distilled water to prepare the 3 mg/ml stock solution and stored at 4–8°C use up to maximum of 30 days. One part of the bleomycin stock solution and two parts of 2% lignocaine were mixed in an insulin syringe with 30 G needle to obtain a final bleomycin concentration of 1 mg/ml just before intralesional infiltration. Each wart and the adjacent skin were cleansed with methanol and bleomycin (1 mg/ml) injected intralesionally until blanching of the lesion observed. In case of ≥10 warts the large lesions were treated in a single session, the amount of bleomycin into a single wart was limited up to 1 ml and total cumulative injected volume did not exceed 2 ml for treated warts at one treatment session. The treated lesions were covered with sterile dressing and patients were prescribed oral diclofenac (50 mg twice daily) for post-injection site erythema, swelling, and pain for 2–3 days. The patients were asked to return immediately in case of any untoward reaction to treatment and after 2 weeks for paring of black, keratotic eschar formed at injection site and to repeat treatment of residual lesions or previously left over lesions. After completion of treatment period, the patients were followed up every 4 weeks up to 24 weeks after last injection for clinical improvement, recurrence, or any adverse effects. The clinical improvement was evaluated by comparing clinical photographic and patient satisfaction level on Likert scale [Table - 1]. Systemic or local adverse reactions such as pain during and after treatment, scarring, pigment changes, Reynaud's phenomenon, tissue/nail damage, itching and skin rash, if any, were noted. Results obtained were analyzed statistically. 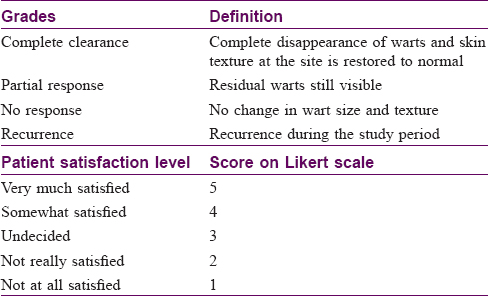 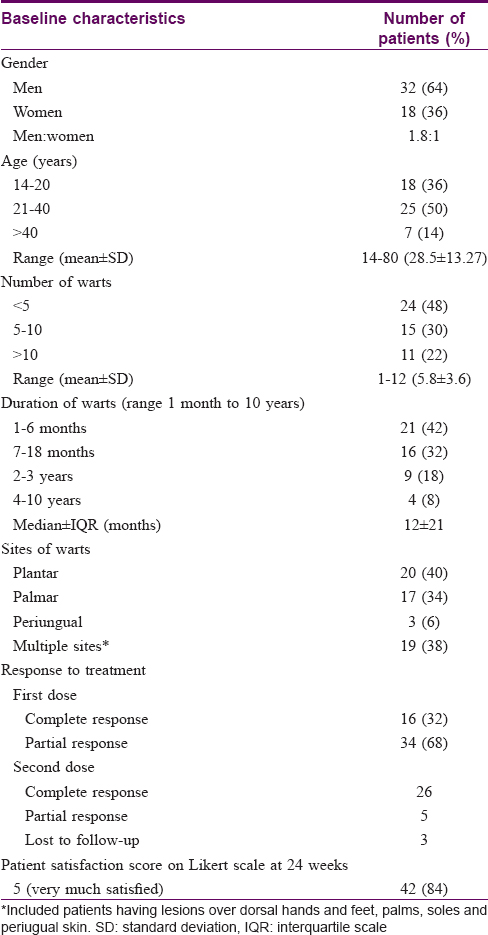 Complete clearance of warts was observed after first bleomycin session in 16 (32%) patients and they were taken off from further treatment [Figure - 1]. All 24 patients with partial response after the first dose showed complete clearance of warts after second treatment session [Figure - 2], [Figure - 3], [Figure - 4]. All patients were followed up every 4 weeks for 24 weeks without further treatment. Two of the seven patients with partial response had complete clearance at 12 weeks. Overall, complete clearance was observed in 42 (84%) patients with no recurrence and partial response occurred in 5 (10%) patients without recurrence at end of 24-week study period [Table - 2]. The response was not different in patients who had received other therapies previously, or having multiple warts. Treatment outcome could not be ascertained in three patients who did not follow up due to outstation assignment. It was also observed that lesions sized >10 mm showed slow regression and most required second treatment session as compared to smaller lesions irrespective of their location over palms/soles or periungual skin. The residual effect of bleomycin for treated warts continued even after discontinuation of treatment. All patients experienced mild to moderate injection site pain for initial 2 days post treatment that did not warrant treatment discontinuation. There was no systemic toxicity or alteration of blood counts, hepatorenal function tests repeated at end of study. Scarring and slight hyperpigmentation noted in a few faded gradually. Periungual bleomycin did not affect nail growth, cause onycholysis or onychodystrophy. All cured patients were very satisfied (overall satisfaction score 5 on Likert scale) with the therapeutic outcome.

The treatment for warts is commonly sought for cosmetic reasons, pain, functional impairment and fear of spread from autoinoculation. Their location over hands is often cosmetically disfiguring and cause of social embarrassment affecting the quality of life. Although not USFDA approved, bleomycin has been used to treat common warts with good results particularly those over hands and feet (including palms, soles), and periungual skin with cure rates up to >96% after one to five treatment sessions by using different techniques [Table - 3].[9],[10],[11],[12],[13],[14],[15],[16],[17],[18],[19],[20],[21],[22] Soni et al., showed a high efficacy of intralesional bleomycin (1 mg/ml) in the treatment of 85 palmoplantar and/or periungual warts. They reported complete resolution of more than 96% warts within 12 weeks after one or two injections.[18] The response in periungual warts was 100% and 96% in palmoplantar warts. Complete remission in 95 (73%) and partial remission in 31 (24%) warts was reported after intralesional bleomycin by Aziz-Jalali et al.[23] However, they also observed high recurrence in patients who had more warts. Overall, complete cure rate of 84% with no recurrences was observed in our study whereas only 10% patients had partial cure at the end of the study period reflecting significant efficacy of this treatment modality. A comparable cure rate of 87% with need for more than two treatment sessions in 13% of patients was reported by Salk and Douglas.[19] In comparison, Bremner reported a cure rate of 63% while treating 142 warts in 24 patients with intralesional bleomycin.[24] Intralesional bleomycin also effectively cleared periungual warts in this study. This has been reported previously wherein a cure rate of 86.6% in 15 patients with periungual warts was observed at 6 months in patients treated with one or two injections of bleomycin sulfate (0.1 U/ml) by translesional multipuncture technique.[21] Apart from the technique of lesional infiltration, the dose of intralesional bleomycin could be an additional factor that may influence therapeutic outcome. However, Hayes and O'Keefe obtained a cure rate of 78% by using a much lower concentration of intralesional bleomycin.[22] However, our observation that lesions sized >10 mm required a second dose for effective clearance reflects that the size of the wart is an important factor in predicting response rather than it's location, duration, number, or dose or technique of bleomycin infiltration. This is perhaps due to difficulty in achieving adequate bleomycin infiltration of large warts, whereby they require repeat treatment sessions. 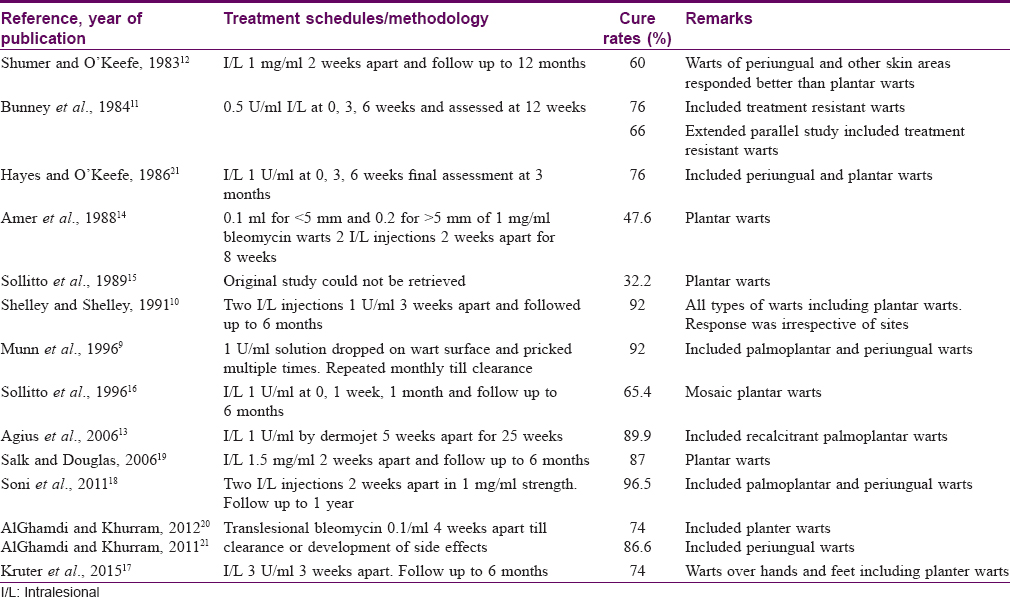 Intralesional belomycin was also found to be effective in the treatment of plantar warts, with 60% cure rate and for periungual warts with a 94% rate compared to none with placebo in a double blind controlled trial by Shumer and O'Keefe.[12] Intralesional bleomycin was also significantly more effective than cryotherapy in treating warts in a comparative study wherein clearance rate for intralesional bleomycin therapy was 97% and 87.6% for warts versus 82% and 72.3% for cryotherapy in two separate studies.[25],[26] A significantly less number of treatment sessions for bleomycin treatment than cryotherapy were needed. Intralesional bleomycin was highly effective in all 19 patients in this study who had been treated earlier unsuccessfully with different modalities reflecting its superiority. This modality appears to be a safe and effective treatment option in warts without causing systemic adverse effects. Common adverse effects observed were injection site erythema, induration and pain in all patients not warranting discontinuation of treatment. Combining the drug with 2% xylocaine ameliorated immediate injection site pain whereas oral diclofenac in recommended doses was enough for symptomatic relief during post-treatment period. Mild textural skin changes in an occasional patient were temporary and reverted to pre-treatment levels.

It can be inferred from this study that intralesional bleomycin is an effective and safe treatment option in common warts including palmoplantar and periungual warts. It has advantages of low dose, no significant adverse effects and high patient satisfaction. The methodology followed uses much less bleomycin than the usual systemic dose (30 mg twice weekly) and needs no special puncture needles or technique. Pre-treatment wart size is an important factor in predicting therapeutic outcome. Small number of patients, lack of control group as well as comparison of different bleomycin concentrations, and short follow-up remain some of the limitations. Systematic and large controlled studies will perhaps resolve issues related to bleomycin dose or the regimen that might be needed to achieve clinical cure for warts irrespective of location, size, duration or failure of prior therapies.