Evaluation of role of Candida in patients with chronic paronychia

Background: Chronic paronychia, earlier considered to be an infection due to Candida, is currently being considered as a dermatitis of the nail fold. Irritant, allergic and protein contact dermatitis are the suggested major pathogenic mechanisms. Hypersensitivity to Candida is more likely to be the etiology, rather than the infection itself. Aims: To assess the clinico-etiological profiles of patients with chronic paronychia and to determine the role of contact sensitization and hypersensitivity to Candida. Methods: All consecutive patients of chronic paronychia attending the dermatology outpatient department (OPD) were assessed for risk factors, number of nails affected, clinical presentation and presence of fungus, patch tested for contact allergy and prick tested for hypersensitivity to Candida allergen. Results: A total of 80 patients of chronic paronychia were recruited into our study. There was female preponderance (66 patients, 82.5%), with the most common group affected being housewives (47 patients, 58.8%). Frequent washing of hands (64 patients, 80%) was the most common risk factor. Fungal culture was positive in 56.1% (41 patients), the predominant species cultured was Candida albicans (15 patients, 36.5%). Patch testing with Indian standard series was positive in 27.1% patients (19 out of 70 patients tested), with nickel being the most common allergen. Prick test with Candida allergen was positive in 47.6% patients (31 out of 65 patients tested). Limitations: Prick test and patch test provide indirect evidence of hypersensitivity, with inherent limitations. Conclusion: Our study shows that chronic paronychia is probably a form of hand dermatitis associated with prolonged wet work, and that there is a higher incidence of contact sensitization and Candida hypersensitivity in these patients.
Keywords: Candida hypersensitivity, chronic paronychia, prick test, patch test

Chronic paronychia is a multifactorial inflammatory condition of the nail folds commonly affecting women. Although previously thought to be candidal in origin, chronic paronychia is now regarded as dermatitis of the nail fold often associated with wet work. [1],[2] Contact allergy, food hypersensitivity and irritant reactions are the more common causes. Wet work and retention of moisture play a key role in the pathogenesis. [2] Disruption of the cuticle results in breakdown of the protective seal between the nail fold and nail plate. This provides a portal of entry for environmental irritants, allergens and microbes, triggering an inflammatory process. [3]

Infection mainly plays a role in perpetuating the inflammation rather than being the primary pathogenic cause. Candida has been the most frequently cultured organism in patients of chronic paronychia. [1] However, despite higher isolation rates, the etiological role of the fungus has not been established. It is regarded as a secondary colonizer as it disappears once the physiological barrier in the nail is restored. [1] We carried out this study to assess the clinico-etiological profiles of patients with chronic paronychia and to determine the role of contact sensitization and hypersensitivity to Candida.

This was a hospital based descriptive study of patients attending the outpatient department of dermatology, Jawaharlal Institute of Postgraduate Medical Education and Research (JIPMER), Puducherry over a period of 2 years between September 2012 and August 2014, carried out after institutional ethical clearance.

Eighty consecutive patients with chronic paronychia were included in the study after written informed consent was obtained. Chronic paronychia was defined as absence of cuticle, with swelling and erythema of the proximal nail fold lasting more than six weeks. Patients with acute paronychia, chronic paronychia as a part of other dermatological disorders, or those who were already on topical steroids or oral antifungals during the past two weeks and pregnant and lactating women were excluded.

Details regarding age, sex, occupation of the patient, presenting complaints, number of nails affected, duration of the disease, past history of exacerbations and the number of recurrences per year and any associated co-morbidities were recorded. History of exacerbating factors with special relevance to the various substances being handled, irritants and allergens with which the patient was coming in contact and factors causing trauma to the cuticle were also noted.

All patients were examined for number of fingers involved, presence or absence of cuticle, clinical signs of paronychia and associated nail plate changes. Grading of severity of paronychia was done using the grading system proposed by Tosti et al. [4]

Samples for potassium hydroxide (KOH) wet mounts, Gram′s stained smear, fungal and bacterial cultures (where there was evident pus discharge) were taken with a disposable scalpel from the most severely affected digits by gentle scraping of the ventral portion of the proximal and lateral nail folds and by nail clippings from the affected nails. Samples for fungal culture were inoculated in Saboraud dextrose agar (SDA) with cycloheximide and incubated at 25°C for 4 weeks. Isolates were identified using phenotypic methods. Blood agar, MacConkey agar and brain heart infusion broth were used for sample inoculation in patients having pus discharge, which was incubated at 37°C for a period of 48 hours. Isolates were identified by biochemical reactions.

In addition, patients were also patch tested and prick tested with Candida antigen. Indian standard series antigens, and other additional antigens if required, were used for patch testing. The allergens were placed in Finn chambers and applied over the upper back using micropore tape. Readings were taken after 2 and 4 days. Results were reported using the International Contact Dermatitis Research Group (ICDRG) [5] scoring system and relevance was interpreted. Using standard Candida antigen as the test antigen, histamine as positive control and buffered glycerinated saline as negative control, prick test was done on the volar aspect of forearm. Measurement of wheal was done after 10 minutes for histamine, and 20 minutes for Candida antigen and saline. Wheal >3 mm or skin index >0.6 was taken as positive.

Diabetes mellitus (9 patients, 11.2%) was the most common associated co-morbidity, followed by hypertension (7 patients, 8.7%), although no statistically significant relation between diabetes and chronic paronychia was detected.

The total number of nails affected in the 80 patients was 169. The mean numbers of nails involved were 2.11 ± 1.82 per person with a median of 2.00. The most common nail affected was the right thumb followed by right middle finger [Figure - 1]. Among the toe nails, both great toes were commonly affected (5 patients each, 6.2%), while all the toe nails were affected in one patient (1.2%). Grade 2 and 3 involvement as shown in [Table - 3] and [Figure - 2], were most common.

Out of 14 patients tested for the presence of bacteria, 7 were positive on Gram′s staining and 6 were positive on bacterial culture. The species isolated were Staphylococcal aureus in four patients (three methicillin sensitive, one methicillin resistant), Escherichia coli and Klebsiella in one patient each and skin flora in one patient. One patient was positive for both, S. aureus and C. tropicalis on culture.

On patch testing with Indian standard series, 19 (27.1%) patients out of 70 were positive. Nickel (7 patients) followed by paraphenylenediamine (5 patients) were the most common allergens [Table - 4], [Figure - 4] and [Figure - 5]. The positive patch test reaction was relevant in 11 patients. Open patch test with raw milk showed a positive reaction in a milkman, suggestive of protein contact dermatitis. A total of 18 patients complained of exacerbation of paronychia following contact with specific agents. Use of detergents (surf, sabeena, rin) was the most commonly reported exacerbating agent (15 patients). Other agents included handling of raw milk and brinjal, use of nail polish and chlorhexidine (one patient each). 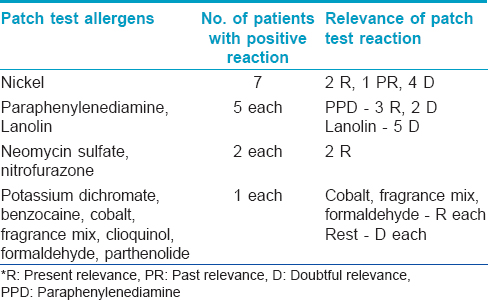 Chronic paronychia is a disease predominantly affecting women and occupations associated with prolonged wet work and repeated trauma to the cuticle. Tosti et al., [2] in their study, had 86.6% female patients, while Daniel et al. [6] had 88.2% females among their enrolled patients of chronic paronychia. The incidence of chronic paronychia was highest among housewives (64%) in a study by Guha and Parija. [7] Wet work with detergents is well known to produce irritant effects as they contain mild acids and alkalis. In our study also, women were more commonly affected and the majority were housewives. Among the risk factors assessed, frequent washing of hands was the most common cause. Housewives frequently wash dishes with bare hands with resultant overexposure to common irritants and allergens. In our study, 22.5% of patients had complained of exacerbation of paronychia following contact with specific agents, the most common being detergents (surf, sabeena, and rin). Chronic paronychia often occurs in diabetics and immunosuppressed patients. [8],[9] In our study, although diabetes mellitus was the most common co-morbidity associated with paronychia, this association was not statistically significant.

Sensitization to allergens as suggested by patch testing is also high in patients with chronic paronychia. Tosti et al. [2] showed patch test positive reactions in 8 (17.7%) out of 45 patients, with nickel sulfate being the most common allergen. In our study, 19 (27.1%) patients tested positive using Indian standard series, with nickel being the most common allergen (7 patients, present relevance: 2 patients, past relevance: 1 patient) followed by paraphenylenediamine (5 patients, present relevance: 3 patients). The use of nail polish, which is known to contain nickel and formaldehyde, was the exacerbating factor in two patients who showed positive patch tests with these antigens. Three patients allergic to paraphenylenediamine gave a relevant history of use of hair dye and nail polish. Relevant history of use of topical antibiotic creams for treatment of paronychia was present in two patients in our study who were allergic to neomycin sulfate on patch testing.

According to Piraccini et al., [1] immediate hypersensitivity to Candida is a more common factor leading to paronychia than Candida infection. In a study by Wong et al., [12] 9 (50%) out of 18 patients with chronic paronychia showed positive immediate intradermal skin test for Candida in contrast to 2 (16.6%) out of 12 non-infected controls. In our study, 31 (47.6%) out of 65 patients tested positive for prick test with Candida allergen. Also, 61% of those who were prick test positive were culture positive for Candida spp. As the role of direct infection of Candida in paronychia has not been totally proven, hypersensitivity to Candida could be a possible cause for persistent inflammation of the nail folds with Candida either being a secondary colonizer or eliciting hypersensitivity resulting in inflammation, tissue swelling and fibrosis.

Thus, prolonged wet work leads to loss of the protective cuticle of the nail and separation of nail fold from nail plate, forming a pocket-like structure which serves as a repository for secondary Candidal invasion. The presence of Candida leads to hypersensitivity which further accentuates the inflammatory process and is responsible for maintenance of the disease. Hence, while choosing treatment options for chronic paronychia, in addition to eradicating the fungus with antifungals, we should also treat the hypersensitivity with topical steroids or tacrolimus. [2],[13] In a study on 45 patients with chronic paronychia, Tosti et al. [2] showed that there was statistically significant improvement with topical methylprednisolone aceponate 0.1% cream, when compared with systemic itraconazole and systemic terbinafine. Presence of Candida was not strictly linked to disease activity. Rigopoulos et al., [13] in 2008, compared the efficacy of tacrolimus with topical steroids in an unblinded randomized study in chronic paronychia. Although patients in the topical steroid group showed statistically significant improvement when compared with the placebo group, tacrolimus ointment appeared to be more efficacious than betamethasone 17-valerate or placebo for the treatment of chronic paronychia.

Our study has limitations. Prick test and patch test provide indirect evidence of hypersensitivity, and have inherent limitations. Moreover, this was a descriptive study with level III evidence.

To conclude, chronic paronychia is probably a form of hand dermatitis associated with prolonged wet work, and there is a higher incidence of contact sensitization and Candida hypersensitivity in these patients.