Vitiligo is an idiopathic, acquired, circumscribed hypomelanotic skin disorder, characterized by milky white patches of different sizes and shapes. It affects about 1-2% of the world population. [1] Several theories have been proposed about the pathogenesis of vitiligo, but the precise cause behind melanocyte destruction remains unknown. Theories regarding the destruction of melanocytes include autoimmune mechanisms, cytotoxic mechanisms, an intrinsic defect of melanocytes, and neural mechanisms. One of the hypotheses that have been recently proposed is the antioxidant deficiency theory. [2]

This study was a hospital based study conducted in the Department Of Dermatology, STD and Leprosy of SMHS Hospital (associated teaching hospital of Government Medical College Srinagar). It included thirty eight patients with vitiligo (20 males and 18 females). Patients who had received any immunosuppressive drugs were excluded from the study. Other exclusion criteria were those patients who had an associated autoimmune disease or a malignancy, and who were smokers. An equal number of age and sex matched controls (20 males and 18 females) were selected as controls.

Fasting venous blood samples (5ml) were obtained from patients with vitiligo and healthy controls and were centrifuged to obtain plasma samples, which were then stored at a temperature of -20°C until analyzed.

Statistical analysis of the data was performed by using Statistical Package for Social Sciences (SPSS Version 17). 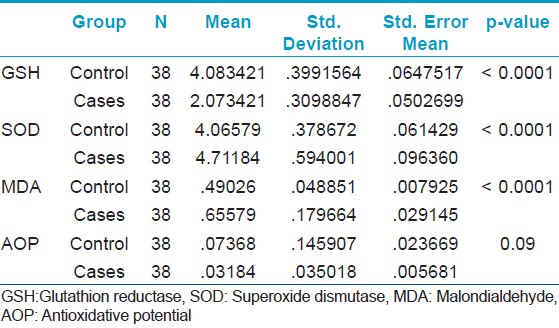 The role of oxidative stress as a triggering event for melanocyte degeneration in the aetiopathogenesis of vitiligo is very well established. [7] Oxidative stress hypothesis is based on the fact that during melanin biosynthesis, some intermediates are generated which are known to be toxic to melanocytes. [8] The final event is the accumulation of H 2 O 2 , which further inhibits the catalase activity, resulting in the destruction of melanocytes.

The reactive oxygen species (ROS) induced oxidation of polyunsaturated fatty acids in biological systems results in the formation of lipid peroxidation products such as MDA. [9] Previous studies have shown higher MDA levels in vitiligo patients compared to healthy controls. [10] In our study, we also found significantly higher plasma MDA levels in vitiligo patients than in controls.

GSH is regarded as a potent antioxidant and an enzyme cofactor. Free radicals as well as other oxidative agents have been known to deplete GSH. In our study, we found lower plasma GSH levels in vitiligo patients as compared to controls. Several studies have also shown decreased GSH levels in blood and erythrocytes of vitiligo patients. [11]

In our study, we detected no significant difference in the plasma AOP levels between vitiligo patients and controls. Khan et al, [13] in their study also found a decreased total antioxidant activity in vitiligo patients.

Our study revealed that there is a definite impairment in the oxidative mechanisms in vitiligo patients, indicating the role of oxidative stress in the melanocyte damage.