Background: Acquired reactive perforating collagenosis (ARPC) is a rare skin disorder characterized by transepidermal elimination of dermal collagen. There is little data regarding the pathogenesis of ARPC. The receptor for advanced glycation end products (RAGE) is a multiligand transmembrane receptor that plays an important role in inflammatory responses and may be involved in the pathogenesis of ARPC.
Aim: To explore the expression of RAGE in ARPC.
Methods: Paraffin-embedded punch biopsy specimens of 41 patients with ARPC and of 11 healthy controls with normal skin were obtained from the Department Of Pathology. Clinical data of all patients were reviewed from the medical files. All specimens were stained immunohistochemically with antibody to RAGE (Anti-RAGE). The intensity of RAGE expression was assessed semi-quantitatively on epidermal cells, microvascular endothelium, dermal fibroblasts and inflammatory cells and graded as 0 (no staining), 1 (weak), 2 (moderate) and 3 (strong). The patients were divided into diabetic and nondiabetic groups for analysis.
Results: RAGE expression in microvascular endothelium, inflammatory cells and fibroblasts of patients with ARPC was more intense than normal tissues of healthy participants (P values are 0.005, 0.017 and <0.001, respectively). The grade of RAGE expression was comparable in diabetic and nondiabetic patients (all P > 0.05).
Limitations: Our method of assessment of RAGE expression was semi-quantitative.
Conclusion: We observed an overexpression of RAGE in lesional samples of patients with ARPC which was independent of the presence of diabetes.
Keywords: Acquired reactive perforating collagenosis, immunohistochemistry, receptor for advanced glycation end products

Acquired reactive perforating collagenosis (ARPC) is characterized by the transepidermal elimination of dermal collagen.[1] Although this disorder is mostly observed in patients with diabetes mellitus or chronic kidney disease, it may on occasion, be seen without any associated systemic disease.[2],[3] The pathogenesis underlying transepidermal elimination in ARPC is not clear. It has been suggested that microtrauma after pruritus, and necrosis of dermal tissue structures caused by an insufficient blood supply due to diabetic microangiopathy may be triggering factors.[4],[5]

Dermal collagens are long-lived proteins. Aging and hyperglycemia alter collagens by nonenzymatic reactions between amino groups and carbohydrate-derived aldehyde groups of glycogen, resulting in advanced glycation end products (AGE).[6] The receptor for advanced glycation endproducts (RAGE) is a multi-ligand receptor that binds several different ligands, including AGE, high-mobility group protein 1, S100/calgranulin, beta amyloid, phosphatidylserine, C3a and advanced oxidation protein products.[7] These ligands are produced by inflammatory cells. After ligand-receptor interaction, signal transduction affects many important pro-inflammatory pathways resulting in a chronic inflammatory state.[8] Indeed, RAGE is not only demonstrated in diabetic patients but also in patients with chronic inflammatory disorders such as Alzheimer's disease, atherosclerosis and various malignancies.[9],[10] RAGE is also overexpressed in psoriatic epidermis,[11] in sun-exposed skin,[12] and in the reticular dermis and extracellular matrix of patients with localized systemic sclerosis and calcinosis.[12] Recent studies have suggested that RAGE signaling modulates keratinocyte growth and migration and AGE-modified collagen-keratinocyte interaction may be involved in the pathogenesis of ARPC.[13],[14] The present study was designed to evaluate (i) the intensity of RAGE expression on epidermal, endothelial and inflammatory cells and fibroblasts in the lesional skins of patients with ARPC and (ii) differences in RAGE expression on these cells in diabetic and nondiabetic patients.

The medical records and pathological specimens of 55 patients diagnosed with perforating dermatosis in the Dermatology Outpatient Clinic of Ataturk Training and Research Hospital, Ankara, Turkey, between 2005 and 2015 were retrospectively reviewed. Of these, 41 patients with a diagnosis of ARPC and sufficient clinical data and pathological specimens that were obtained from sun-protected skin were included in the study. Skin specimens from 10 healthy women who underwent mammoplasty and 4 men whose biopsy specimens were taken from axilla or buttock with normal skin structure constituted the control group. Demographic and clinical data of the patients including age, gender, systemic diseases, age of onset and duration of ARPC were noted. The patients were divided into two groups: diabetic (n = 22) and nondiabetic (n = 19). The study was approved by ethics committee of the hospital.

Formaldehyde-fixed and paraffin-embedded punch biopsy tissue were retrieved from the Department Of Pathology. Four mm thick sections, were prepared according to routine protocols. In brief, the sections were baked for 1 h at 55°C, deparaffinized in three changes of xylene and rehydrated in ethanol (2 × 100%, 1 × 95%, 1 × 90% and 1 × 70%), followed by phosphate-buffered saline solution. Antigen retrieval was performed by boiling the slides in citrate buffer at pH 6.0 (Target Retrieval Solution, Dako, USA) in a microwave oven (600 watts; 3 × 5 min). Following antigen retrieval, tissues were blocked with 3% bovine serum albumin in phosphate-buffered saline solution for 30 min at room temperature. Tissues were then probed at a dilution of 1:20 with a rabbit polyclonal antibody recognizing RAGE (ab3611; Abcam, Cambridge, MA, USA) overnight at 4°C in a humidified chamber. Tissues were washed extensively with phosphate-buffered saline with Tween and endogenous peroxidase activity was quenched with a peroxidase suppressor. Detection was performed using a biotin-conjugated secondary antibody and Streptavidin-horseradish peroxidase followed by colorimetric detection using 3, 3′-diaminobenzidine. Tissues were counterstained with hematoxylin and prepared for mounting.

Epidermis, inflammatory cells, microvascular endothelial cells and fibroblasts were examined for the expression of RAGE. A semi-quantitative analysis using a scale from no staining (zero) to weak (1) moderate (2) and strong (3) intensity by investigating the whole punch biopsied area (microscope objective, ×40) was performed as described by Lohwasser et al.[10]

Evaluation of normality was performed using the Shapiro-Wilk test. Normally distributed continuous variables were expressed as the mean and standard deviation (mean ± SD) and were compared with Student's t-test for independent groups. Non-normally distributed continuous variables were expressed as median and were compared with Mann–Whitney U-test for independent groups. Categorical data were reported as numbers and percentages and compared with Pearson's Chi-square test or Fisher's exact test. P< 0.05 was considered statistically significant. All statistical analyses were performed using Statistical Package for the Social Sciences version 15.0 statistical software package (SPSS Inc., Chicago, IL, USA).

The study included 41 patients with ARPC (25 women and 16 men) and 11 gender and age-matched healthy controls (eight women and three men). Of the patients, 22 (53.7%) had diabetes mellitus. The demographic characteristics of the study population are presented in [Table - 1]. 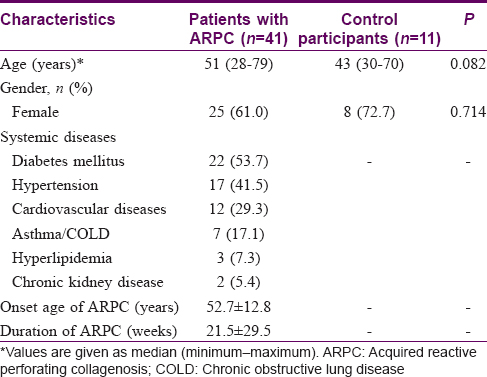 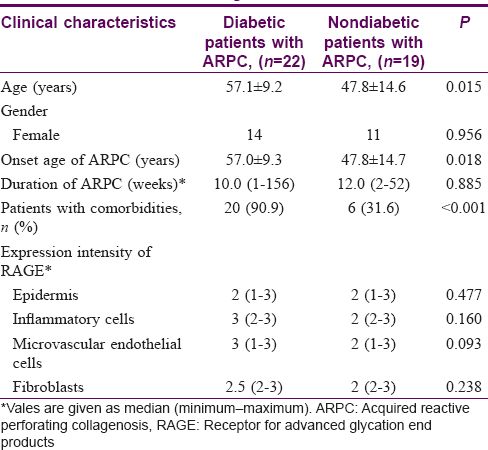 The elimination of necrotic collagen tissue within an epithelium-lined crater is the characteristic feature of ARPC.[4] The pathogenetic mechanisms in ARPC are not clearly established. The respective roles of diabetes mellitus, chronic kidney disease and hemodialysis have been vigorously debated.[2],[3],[4],[5],[15] Fujimoto et al.[13] hypothesized that pathological events in ARPC begin with dermal-epidermal junction damage caused by severe pruritus which exposes keratinocytes to AGE-modified interstitial collagen (types I and III). This induces terminal differentiation of keratinocytes via the AGE receptor (CD36), leading to the upward movement of keratinocytes together with glycated collagen.

In our study we found that although the expression of RAGE in the epidermis did not differ from healthy controls, it was overexpressed in endothelial cells, fibroblasts and inflammatory cells in the dermal compartment. This suggests a potential role for the RAGE in the pathogenesis of ARPC. It has been shown that activation of RAGE triggers both AGE production and upregulation of RAGE itself in response to inflammation,[7] and this amplified signal transduction converts the acute inflammatory response into a sustained inflammation causing increased tissue damage.[16] Thus overexpression of RAGE on endothelium, fibroblasts and inflammatory cells in ARPC may lead to a strong inflammatory response and tissue damage. An increase in AGE-modified dermal collagens or other ligands of the receptor produced in chronic inflammatory disorders such as diabetes mellitus, hypertension or cardiovascular diseases may enhance the interaction with RAGE in ARPC.

Since the expression of RAGE on epidermal, microvascular endothelial and inflammatory cells and fibroblasts was similar in both diabetic and nondiabetic patients, it is likely that the pathogenesis of ARPC may involve overactivation of RAGE triggered by the ligands independent of diabetes.

A limitation of our study was the semi-quantitative assessment of the expression of RAGE. Although the results of our analysis need to be quantitatively verified, the sample size of our study population is quite large for such a rare skin disorder and the statistical analysis demonstrated significant values.