A house to house study was done on 666 children aged 0-14 years in 5 villages of Wardha district in Maharastra (Central India). 346 children (51.95%) had one or more dermatoses. Infective dermatoses contributed 63.5% of all dermatoses, while noninfectious and nutritional deficiency dermatoses were responsibile for 21.2% and 15.2%, respectively. Pediculosis capitis was seen in 136 children (20.4%), followed by pyoderma in 107 (16.07%) and dematophytosis in 44 (6.61%). Scabies was found in only 6 and 4 cases of leprosy were also delected. Pityriasis alba, pityriasis capitis amond non-infectious; hair and skin changes among nutritional deficiency dermatoses were leading presentations.
Keywords: Dermatoses, Pattern, Children 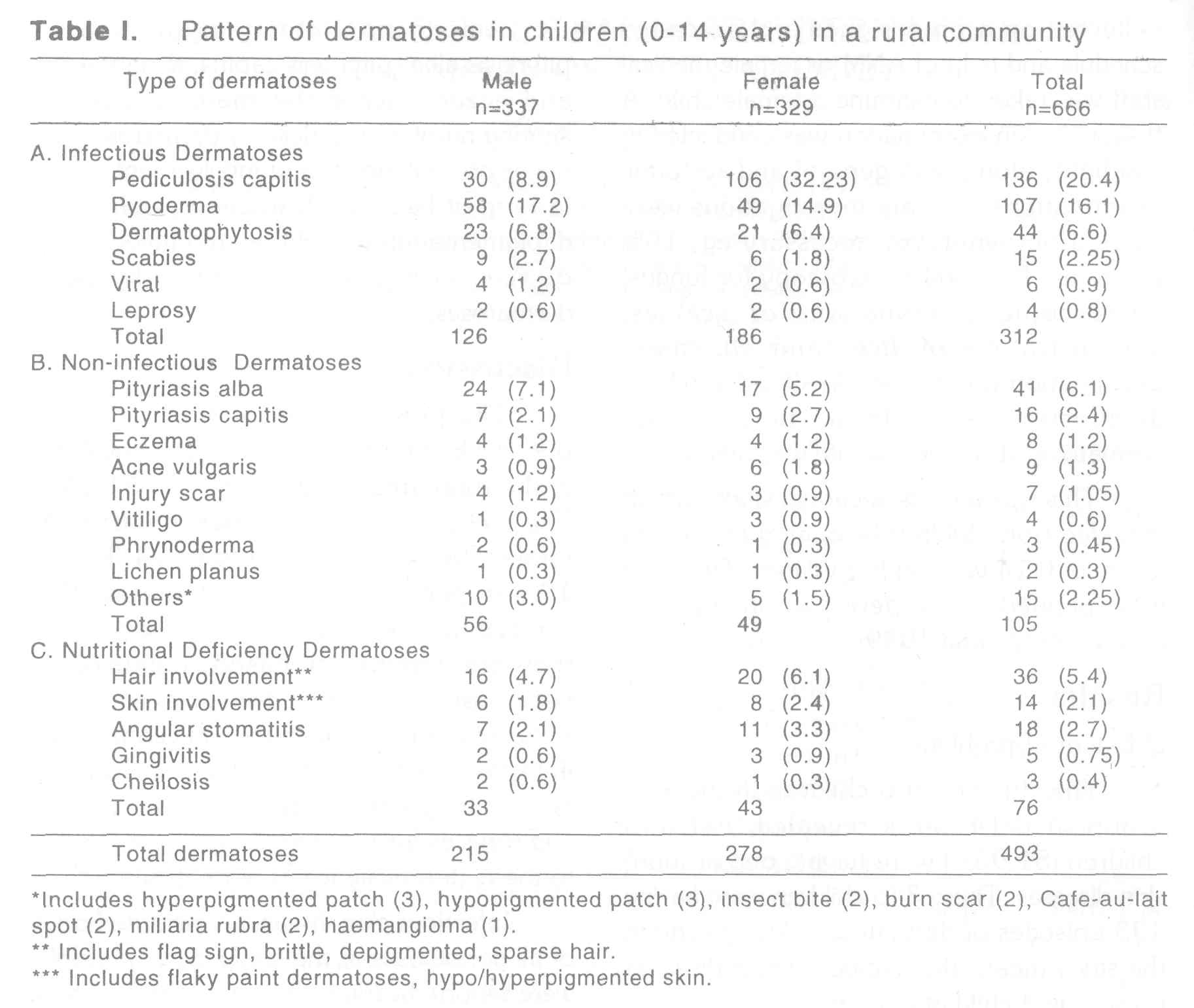 Dermatoses are a wide-spread health problem among children though not responsible for mortalities but for morbidities. It has been neglected both by the community and health personnels in India. Skin of the child is more prone to develop skin diseases.[1]

A number of studies have been conducted to understand the skin problems in child population which have recorded wide ranging prevalence and patterns.[2][3][4] Most of the studies are either hospital based or are based on school health survey. Many studies were conducted in urban areas. Such studies do not reflect the true state of diseases in the community. Enrolement rate in the schools is poor and only a small segment of population have access to health facilities. Moreover these studies have not included the entire paediatric age-group. 78% of Indian population stays in rural areas and children below 14 years constitute about 38% of the total population. Therefore, the present study was conducted with the objective of understanding the true extent of the dermatoses and its pattern in the children of 0-14 years in the rural community.

Present study was conducted in the five villages of Primary Health Centre, Anji, Wardha District in the state of Maharastra (Central India), The PHC is about 24 km from the Department of Community Medicine of the Medical Institute.

The climate of the Wardha District is characterised by hot summer and dryness throughout the year except during the southwest monsoon season when it rains from june to August. Temperature ranges between 46΀c and 8΀c.

The survey was carried out by a team comprising of the investigator and medical staff, through house to house visit in each village. Children not available at home were contacted either in the schools or an attempt was made to contact them during subsequent visit thereby a coverage or 85% could be achieved. Before begining the actual work in the field a training on the dermatological problems was undertaken by the investigator in the skin OPD of the institute under the guidance of a dermatologist. Information was collected on a predesigned and pretested schedule and help of ANM or female medical staff was taken to examine a female child. A thorough skin examination was conducted in day light, along with general and systemic examinations. Certain investigations were carried out wherever necessary eg, 10% potassium hydroxide microscopy for fungus, microscopic examination for scabies, demonstration of lice, and slit-smear examination for leprosy. In situation where diagnosis was doubtful, help of the dermatologist of the institute was taken.

This was a cross-sectional study, which included 666 children belonging to the age group of 0-14 years in five villages. The study was spanned over a period of one year ie, July 1988 to June 1989.

a) Extent of problem

Among the infectious dermatoses, pediculosis capitis was the leading presentation, found in 136 children (20.4%) being four times in the girls. It was followed by pyoderma in 16.1% and dermatophytosis in 6.6%. Only 6 children were having scabies and 4 cases of leprosy were also detected.

The present study of dermatoses on 666 children revealed a very highy prevalence in the rural areas to the extent of 51.95%. The prevalence of dermatoses in urban and rural schools was reported to be 14.3% and 10% respectively.[2],[6] These studies neither covered the entire paediatric age-group nor they are community-based. Inclusion of pediculosis capitis and poor socio-economic status of the rural community in central India in terms of high illiteracy rate, poor hygienic and sanitary conditions, lack of awareness and services for the skin diseases contributed to the high prevalence of dermatoses.

Infectious skin diseases constituted 63.5 of all dermaloses in the study. Similar results were reported earlier.[7],[11] The reasons for high infectious dermatoses are the same as mentioned above. Behl in the population based survey detected 85.2% of dermatoses as infectious in comparison to 26.18% in a skin institute.[8] This highlights the actual position of disease pattern in the community.

Pediculosis capitis, pyoderma and fungal infections shared 58% of all skin diseases. With control and preventive measures against this triad the burden of skin diseases can be reduced by half in the community. Most of the girls keep long hair and do not wash so often, thus the peduculosis capitis was four times higher in them. Sharma also noticed pyoderma, fungal infections, pediculosis capitis as commonly occurring diseases in urban school children.[2] Pediculosis capitis was observed to be commonest problem by other authors as well.[9],[10] A low prevalence of scabies was because of absence of epidemic at the time of study. Scabies was the commonest disease in under six year children in slums of Bombay.[2] In rural ares of Jamacia scabies, tinea, and impetigo were the main diseases.[11] Wardha district is hyperendemic for leprosy thus four cases of leprosy were also dectected.

Pityriasis alba, pityriasis capitis, acne vulgaris were the major presentations among non-infectious dermatoses. Prevalence was low for these diseases. Pyoderma, phrynoderma, pityrirasis alba and eczema were found to be commonly present in slums.[3] Wardha district has high prevalence of severe form of malnutrition, thus 36 children were having hair changes and 14 children were having skin changes, in addition to multiple vitamin deficiencies menifesting as skin lesions.

In order to reduce the miseries of dermatoses in rural children of India, it is important to control at least pediculosis, pyoderma, fungal infections and severe forms of malnutrition. Improvement in personal hygiene, sanitation, improving awareness regarding dermatoses and provision of commonly required drugs at the grass-root level can bring down the prevalence of dermatoses in children.

Many thanks go to children who gave me co-operation in carrying out this work. Thanks also go to Dr Mohan Singh, Dermatologist, MGIMS, Sewagram. Wardha. I am also grateful to. Dr H M Swami, Professor and Head, Department of Community Medicine, Government Medical College, Chandigarh for his guidance.