Background: The introduction of dexamethasone-cyclophosphamide pulse (DCP) therapy for the pemphigus group of disorders by Pasricha has revolutionized the therapy for pemphigus. There are very few studies regarding factors affecting duration of phase I of the DCP. Aims: Our purpose was to study the relationship between various factors and duration of the phase I. Methods: A retrospective study of 98 patients of pemphigus on Dexamethasone Pulse therapy was conducted. Patients were classified according to duration of Phase 1 as those with phase I less than 6 months and those more than 6 months and analyzed for variable factors affecting duration of phase I. Results: Disease severity in pemphigus significantly prolonged the duration of phase I of DCP. Longer duration was also observed in patients on concurrent oral steroid therapy (both statistically significant). Conclusion: The findings from our study help us to address patient expectations and apprehensions regarding duration of therapy. A detailed understanding of the various patient and disease related factors responsible for affecting Phase I duration will help in better management of the patient, and the disease.
Keywords: Dexamethasone cyclophosphamide pulse therapy, pemphigus, phase I, pulse therapy

Pemphigus is the most common and severe autoimmune vesiculobullous disorder in India. Mortality which was high (75%) in absence of treatment, has reduced drastically to 25-45% following the introduction of corticosteroids. With the advent of "steroid-sparing" agents, the mortality further reduced to less than 10%. A number of different immunosuppressive agents have been tried so far including cyclophosphamide, azathioprine, chlorambucil, cyclosporine, methotrexate, and mycophenolate mofetil. However, none of them is uniformly effective and treatment needs to be tailored for each individual patient.

The introduction of dexamethasone-cyclophosphamide pulse (DCP) therapy for pemphigus by Pasricha et al. in 1982 revolutionized the treatment of the disease. Each cycle of dexamethasone-cyclophosphamide pulse therapy consists of slow infusion of 100 mg dexamethasone in 500 ml of 5% glucose daily for three consecutive days, with 500mg cyclophosphamide infusion on the second day. This cycle is repeated every 28 days throughout phases I and II. Oral cyclophosphamide (50mg once daily) is continued between pulses. The DCP regimen is administered in four phases. [1] During phase I, the patient may continue to develop recurrences in between the pulse infusions and can then be given additional treatment, either daily oral corticosteroids or additional dexamethasone pulses every 2 weeks instead of every 4 weeks. After the skin and mucous membrane lesions have resolved completely and additional medications have been withdrawn, the patient is considered to have entered phase II. In phase II, the patient is administered 9 more DCPs at 28 days intervals along with 50 mg cyclophosphamide orally daily following which the DCPs are stopped and the patient receives only 50 mg cyclophosphamide orally per day for the next 9 months as a part of phase III. After this, the treatment for pemphigus is withdrawn completely and the patient is followed up life long to look for a relapse if any (phase IV). In case of development of any new lesion during phases II-IV, the patient should be restarted on phase I DCP.

Thus, it seems that phase I of DCP determines the total duration of treatment required in any individual patient. In our experience, the length of phase I was found to vary from as short as 2 months to as long as nearly four years. Hence, we undertook a study to identify the factors that influence the duration of phase I which seems to give an indication for the overall prognosis in an individual patient.

A retrospective study was conducted at the Department of Dermatology of the T.N.M.C And BYLN charitable Hospital. We recruited 98 patients with a diagnosis of pemphigus between 1997 and 2012.

The study is based upon a retrospective analysis of clinical data collected over 15 years. Patient photographs were not used nor could any patient be identified from any of the data given in this article. Therefore, no ethical clearance was sought.

Data recorded for all patients included a detailed history (duration of disease, the type and distribution of lesions, associated symptoms and other diseases, course of illness and drug history) and a thorough clinical examination at first visit and on follow up. The diagnosis was made on clinical grounds and confirmed by positive Tzanck smear, histopathology and direct immunofluorescence in doubtful cases. Clinical severity was recorded for all patients based on the number of skin lesions and disease was classified as mild (<15 skin blisters or erosions), moderate (15 to 30 skin blisters or erosions) and severe (>30 skin blisters or erosions or extensive confluent areas of erosion). Results of routine investigations performed in all patients were recorded (including a complete haemogram, erythrocyte sedimentation rate (ESR), fasting and post-prandial blood glucose levels, liver and renal function tests, urine and stool analysis especially for occult blood, baseline ECG, chest X-Ray and ophthalmological examination for cataract and glaucoma).

The DCP treatment regimen as devised by Pasricha et al. [1] was followed. However, azathioprine instead of cyclophosphamide was administered to six patients of child-bearing age considering the risk of gonadal suppression. Any concurrent illness/infections were treated appropriately without discontinuing the DCP therapy. The first 54 patients had received the original regimen as devised by Pasricha et al. with phase II lasting for 6 months and phase III for 12 months. Six of these 54 patients relapsed during phase IV of therapy. Since 2008 the modified DCP regimen [2] was followed where phase II was continued for 9 months and phase III for another 9 months. Data of those patients who completed phase I DCP successfully was statistically analyzed using Chi-square tests and ′P′ values were calculated.

Forty-seven patients took longer than 6 months to complete phase I; twenty eight of them also required concurrent oral steroids and this relationship was found to be statistically significant (P = 0.027, [Figure - 2]). Upon analysis, it was found that out of 34 patients with severe pemphigus, 25 were on concurrent steroids of which 18 patients needed more than 6 months to complete phase I of pulse therapy. This was not statistically significant. No significant relation was found between the duration of phase I and presence of oral lesions [Figure - 3]. A longer pre-treatment duration of the disease is usually considered to be indicative of an advanced disease that is more difficult to treat. However, we did not find any significant prolongation of phase I due to long pre-pulse disease.

Cox proportion hazard analysis showed that severity of pemphigus is the only factor affecting the duration of Phase I [Table - 1]. 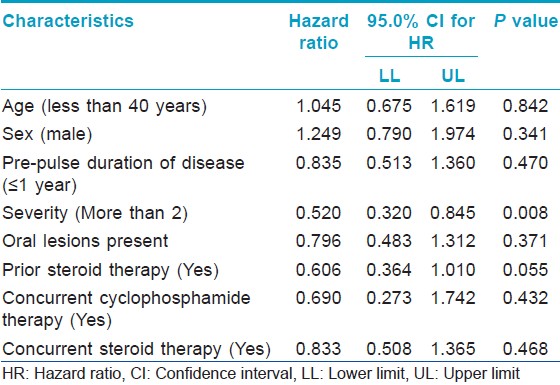 A survival analysis of the Kaplan Meier was performed on the entire study population. [Figure - 4] shows that only 14 out of 98 patients required more than ten pulses in phase I. Thus, most of the patients were lesion free in less than 1 year. Only one patient was still getting new lesions after 30 DCP pulses.

Although DCP is a widely used therapy in patients with pemphigus and other dermatological and rheumatological disorders, to the best of our knowledge, there are no studies assessing factors affecting duration of phase I of the DCP. In this study, we found that the severity of pemphigus correlated with the duration of phase I. Longer duration was also observed in patients on concurrent oral steroid therapy. Many of the patients requiring concurrent daily steroids had severe disease and hence it is proposed that severity of disease was more likely to determine duration of phase I rather than concurrent oral steroids. However, Rao et al. [3] did not find the duration of phase I to be related to the severity, extent, duration or grading of pemphigus. In another study, concurrent steroid therapy along with antibiotics for secondary infection, if any, was found to be more effective in inducing remission earlier and shortening duration of phase I. [2] Kanwar et al. [4],[5] in their series reported that the response to pulse therapy was faster in the milder form of disease; the severe form of disease requiring more number of pulses as well as higher doses of intervening oral corticosteroids. These results are similar to those of our study.

Eighty four (85.7%) of the 98 patients completed phase I with 10 pulses or less. This is comparable to a study by Pasricha et al. [2] where 83.7% patients required up to nine pulses in phase I. Gender and pre-pulse disease duration were found to have no effect on duration of phase I. Oral lesions are known to be recalcitrant to treatment. However, in the present study no significant difference was found in the duration of phase I between patients with significant oral lesions and those without. This further highlights an induction of quick remission of lesions which is considered one of the the main advantages of DCP. We observed correction of weight gain, better control of diabetes and hypertension in some patients after shifting to DCP and stopping oral corticosteroids.

The female patient who continued to be in phase I for 4 years had recurrent infection in the pemphigus erosions that was treated with antibiotics without stopping DCP pulses. However, she was ultimately diagnosed with Methicillin resistant Staphylococcus aureus infection after performing culture and sensitivity testing from her erosions and her lesions cleared with appropriate antibiotics. She had complete healing of lesions, stopped getting new lesions and was declared to have entered phase II after 4 years of treatment in phase I, which may have been avoided if the MRSA was found and treated earlier. Early cultures in non-healing lesions are therefore recommended.

The findings from our study help us to address patient′s expectations and apprehensions regarding duration of therapy. A detailed understanding of the various patient and disease related factors responsible for affecting phase I duration will help in a better management of the patient and the disease.