Falknor's needling method as a potential immunotherapy in palmo-plantar warts

Background and Aim: Treatment of palmoplantar warts is a challenge for dermatologists. We aimed to study the efficacy and safety of Falknor's needling method in palmoplantar warts.
Methods: In an open, nonrandomized study, the index wart of eligible patients was punctured several times with a 26-gauge needle to produce a “beefy” red wound. Patients were followed up to 6 months.
Results: Out of 82 patients, complete resolution occurred in 58 (70.7%) and partial response in 5 (6.1%) patients. Nine (10.9%) patients developed secondary infection.
Limitations: Small sample size, No comparison group.
Conclusion: Falknor's needling method provides a high rate of complete resolution after a single treatment session. It is easy to perform and is cost effective.

Viral wart is a common skin disease caused by human papilloma virus. Usually asymptomatic, sometimes they are unsightly, painful and debilitating. Though warts may disappear without treatment, sometimes they may persist for years.[1] More than 100 serotypes of human papilloma virus have been identified. Site and morphology of the lesions is usually determined by the serotype.[2] Palmoplantar warts are usually caused by serotypes 1, 2 and 4.[1]

Treatment of warts is often difficult despite availability of several modalities. There is no single method effective in all patients. An ideal treatment should result in resolution of all or majority of the warts, be painless, need only one or a part of a lesion to be treated, cosmetically acceptable and offer immunity against human papilloma virus for a lifetime.[7] It was Falknor who first described direct needling procedure, without the use of chemicals (other than local anaesthesia), as a treatment for warts.[8] His method comprised of anesthetizing the area, followed by thrusting in a needle “in dart fashion, so as to penetrate the full depth of the wart and exiting through the base of the capsule into the fat.” He claimed that there were only two recurrences out of 126 lesions treated with this technique. Subsequent published research using this method have been sparse. The aim of this study was to evaluate the safety and efficacy of needling procedure for the treatment of palmar and plantar warts.

An open label, prospective nonrandomized study was carried out between September 2015 and August 2016 at government medical college and hospital, Kota (Rajasthan) after obtaining clearance from institutional ethics committee. A total of 82 patients who were clinically diagnosed to have single/multiple plantar/palmar/palmoplantar warts were included in the study subject to the following criteria: All participants included in the study were aged 16 years and older. A treatment-free washout period of 3 months was ensured before the study All enrolled patients were found to be human immunodeficiency virus (HIV) - negative on testing. Written informed consent was obtained from all participants after counselling. Participants who were not previously immunized against tetanus were given injection tetanus toxoid 0.5ml intramuscularly at the screening visit. Baseline data was collected using a predesigned proforma.

Patients with a history of hypersensitivity reaction to local anesthesia, pregnancy and lactation, patients who had infection or poor tissue viability at the site of injection, who did not give consent to be a part of the study (refusal) were excluded. Other exclusion criteria were immunosuppression due to drugs or disease, advanced diseases of vital organs, inability to come for monthly follow-up and alcohol or other substance abuse.

The procedure was performed under strict aseptic conditions. In those patients with mosaic warts or multiple plantar warts, the index wart (the largest and thickest lesion) was selected for treatment. After cleansing with surgical spirit and infiltration with 2% lignocaine, the wart was paired superficially with an 11-number surgical blade. A fresh surgical needle (26 gauge) was used to puncture through the lesion repeatedly up to the level of subcutaneous tissue. Each puncture was just enough to produce pinpoint bleeding. This was continued till no more resistance or reactive pressure was felt from the epidermis. The end point was to produce a “beefy” red wound (video- 1). The number of punctures varied according to the size of the lesion (average number being 20–30/cm2).


Firm pressure was applied to the wound till there was no active bleeding and then a sterile gauze dressing was given. Patients were instructed to keep the dressing dry for 24 to 48 hours. To induce a successful controlled inflammatory response, each patient was advised to avoid taking nonsteroidal anti-inflammatory drugs for 48 hours.

Five follow-up visits were scheduled, first at 2 weeks then at 1, 2, 3 and 6 months. Efficacy of the procedure and adverse events were assessed and noted at each follow-up visit. Response was graded as complete (complete clearance of all lesions), partial (reduction in size and/or number of lesions) and no response (no response at all). If the wart/s had not cleared in six months, alternative treatments were offered. All participants were asked whether they were satisfied with the procedure or not.

Data was entered in Microsoft excel sheet and was analyzed using statistical package for social sciences (SPSS Version 16). P value of < 0.05 was considered to be statistically significant. 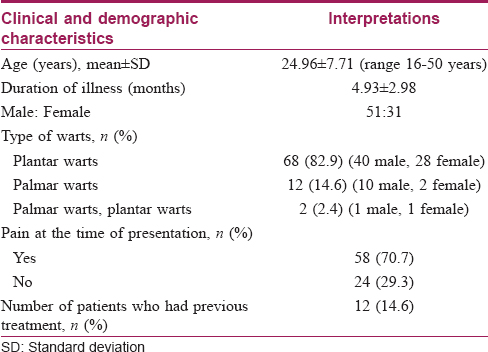 All patients returned for follow-up as advised. Fifty-eight (70.7%) patients (36 males and 22 females) showed complete response [Figure - 1] and [Figure - 2]. Five (6.1%) patients (three males and two females) showed partial response and 19 (23.1%) patients (12 males and 7 females) showed no response[Table - 2]. Average duration of resolution of lesions was 2.76 ± 1.1 months. There was no significant difference between response rate of plantar and palmar warts. Subgroup analysis showed no significant difference in response with respect to sex (P value = 0.99) or previous treatment. There was also no difference in the outcome between index warts and other warts (P value = 0.32) and that between single and multiple warts (P value = 0.72). Earliest response seen was at one month (two patients). Nine out of 82 patients (11%) patients developed secondary infection which was treated with a short course of empirical oral antibiotics. Post procedure pain was minimal and did not necessitate any drug intake. Out of 82 patients, 61 (74.4%) were satisfied with the given treatment, and there was no recurrence during the 6-month follow-up period in any of the patients.

Table 2: Response to treatment observed at each follow-up visit

Although benign in nature, warts cause disfigurement and physical discomfort. They also have a tendency to koebnerize and carries risk of spread to others.[9] No single treatment is completely effective in all patients. Treatment options include cryotherapy, lasers, intralesional bleomycin, topical application of 5% imiquimod cream, systemic retinoids, photodynamic therapy and topical sensitizers such as dinitrochlorobenzene, squaric acid dibutylester and diphencyprone. Surgical excision, curettage, electrocautery and radiofrequency surgery are also commonly used. The success rate of these procedures is between 65% and 85%.[10],[11] Destructive or surgical treatments may be painful and can result in unsightly scars. The lesions may recur too.[12] Destructive procedures are especially inappropriate and impractical in the treatment of multiple warts, especially on the palms and soles.

Immunotherapy, which can act on lesions not intervened directly, would be particularly useful when treating patients with numerous warts, especially on areas difficult to access.

The current study represents the largest case series published to date using Falknor's method since the original paper was published in 1969. The procedure is simple and cost effective. There was complete resolution in 70.7% of patients with a single treatment session. Selecting only adults for the study minimised chances of spontaneous regression which is common in children. An article by Longhurst and Bristow of 46 patients with only plantar warts, using Falknor's needling method, showed complete resolution in 69% cases with 8 weeks of follow-up without recurrence [Table - 3].[3] A study by Shivakumar et al. involving 60 patients using autoimplantation technique (in which minced particles of wart tissue were introduced in dermal pocket), showed 73% clearing of warts within two months.[14] Lal et al. reported complete resolution of cutaneous warts in 62.5% of patients eight weeks after autoimplantation in a study involving 48 patients.[15] Eleven patients developed adverse events.[15] Adverse events were less frequent and mild in our study compared to other studies using auto-implantation methods.

Overall, the results of this study are promising and further studies with comparison groups may be useful.

As this study is a relatively small case series any inherent placebo effect cannot be excluded. We also could not check levels of Th1 cytokines to ascertain its in the mechanism of action.

The authors certify that they have obtained all appropriate patient consent forms. In the form, the patients have given their consent for their images and other clinical information to be reported in the journal. The patient understand that names and initials will not be published and due efforts will be made to conceal identity, but anonymity cannot be guaranteed.