Background: Histopathological evaluation of skin lesions is not feasible in many leprosy endemic areas. Fine needle aspiration cytology (FNAC) is a simpler tool compared to histopathology for the evaluation of the cytomorphology of skin lesions. Aims: To study the cytomorphology of leprosy lesions in fine needle aspirates and correlate it with the histopathology. Methods: Seventy leprosy patients diagnosed and classified according to Ridley Jopling scale were included. Fine needle aspirates were taken from the lesion followed by a skin biopsy from the same site for histopathological examination after H/E staining. Results: Borderline leprosy patients with Type I reaction showed significantly large numbers of giant cells, collagen and elastin in their smears as compared to those without reaction. The smears were more heavily cellular with fragmented collagen and elastin along with significant increase in neutrophils in patients with Type II reaction while foamy macrophages with fatty background were common in non-reactional lepromatous leprosy patients. A complete correlation between histopathological and cytomorphological findings was observed in 77.3% of cases. Conclusion: FNAC may be used as an alternative tool to assess leprosy lesions in areas where histopathological services are not readily available.
Keywords: Cytomorphology, Fine needle aspiration cytology, Leprosy, Reactions

Table 2: Cytomorphological features on skin aspirates of lepromatous leprosy patients with and without Type II reaction

Table 2: Cytomorphological features on skin aspirates of lepromatous leprosy patients with and without Type II reaction 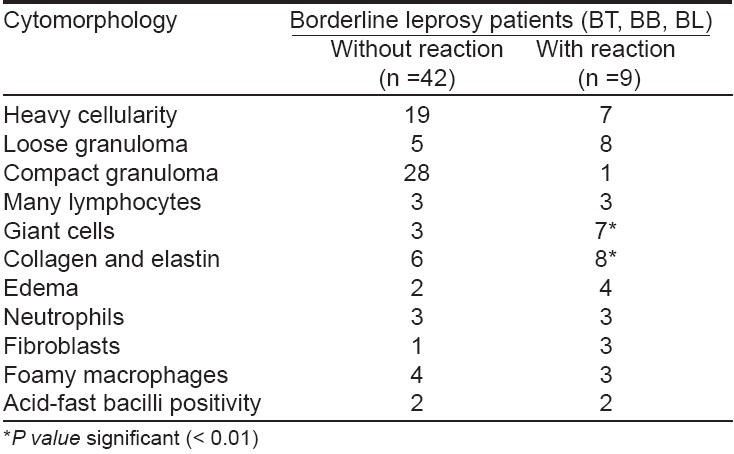 Table 1: Cytomorphological features on skin aspirates of borderline leprosy patients with and without Type I reaction

Table 1: Cytomorphological features on skin aspirates of borderline leprosy patients with and without Type I reaction

Cytology is a widely accepted diagnostic procedure for a large variety of malignant and inflammatory lesions. Skin-slit smears stained for acid-fast bacilli (AFB) have been conventionally used for the assessment of leprosy lesions but their use has been restricted to the evaluation of the bacterial index and morphological index. Marian Ridley emphasized the interpretation of cellular exudate in conventionally stained Ziehl-Neelsen smears. [1] Singh et al [2] studied the cytomorphology of the cellular exudates in fine needle aspirates (FNA) of leprosy lesions and could sub-classify them on the same position on the Ridley Jopling (R-J) scale as seen in histology. It was also observed that FNA smears, in contrast to slit-skin smears, were free of confounding epidermal squamous cells and therefore better suited for evaluating cell morphology. The current study was undertaken to evaluate the utility of FNA in reactional and non-reactional leprosy lesions.

Seventy patients attending the skin and leprosy clinic were studied. Their diagnosis and classification in the R-J scale [3] were based on the clinical examination using standard criteria. Fine needle aspirations were done on the representative lesions followed by a skin biopsy from the same site for histopathological examination. Biopsies were evaluated and classified according to the histological criteria established by Lucas and Ridley [4] and the World Health Organization. [5] Fine needle aspiration smears were specially evaluated for cellularity, morphological details of macrophages, accompanying inflammatory cells and bacterial index. All smears were air-dried and stained with May-Grunwald-Giemsa (MGG) stain and modified Ziehl-Neelsen′s stain. [6] Skin tissue for histopathology was obtained in 53 patients and stained with H and E stain. Cytological criteria for sub-classification of leprosy were applied as defined by Singh et al. [2] These are as follows:

1. Tuberculoid leprosy (including TT and BT)

b. Poorly cohesive granulomas composed of an admixture of epithelioid cells and macrophages

b. Singly dispersed macrophages with ′negative images′; no epithelioid cells

b. Numerous foamy macrophages in a fatty background with intracellular and extracellular ′negative images′

The smears of patients with reactional leprosy were highly cellular with foamy macrophages and ′negative′ images, neutrophilic infiltrate, degenerating collagen and elastin, a few lymphocytes and a fatty background [Table - 1],[Table - 2]. Among nine patients with a Type 1 lepra reaction (BT, six; BB, two; and BL, one), neuritis was present in six; none of them had a nerve abscess. All the patients presented with exacerbation of erythema and inflammation over existing lesions and appearance of a few new lesions. The cytomorphological features in six of the nine clinically diagnosed patients were confirmed by FNAC of skin aspirates using the standard cytological criteria described by Ridley and Radia. [7] All the remaining three patients showed nonspecific cytological features. All the borderline group patients (BT, BB and BL) had heavily cellular smears, lymphocytes, neutrophils and edematous background. However, loose epithelioid cell granulomas and giant cells, collagen, elastin and proliferating fibroblasts were present in a significantly large number in smears of borderline leprosy patients with a Type 1 lepra reaction. The cytological features of Type 2 lepra reaction were present in five of the six patients with ENL. The histopathological examination of the skin biopsy showed evidence of ENL in all of them except one. The smears were more heavily cellular with fragmented collagen and elastin and a significant increase in neutrophils in patients with a Type 2 lepra reaction, while foamy macrophages with fatty background were relatively more commonly seen in non-reactional lepromatous leprosy patients.

Ridley and Jopling [1] proposed a histological classification of leprosy reflecting the immunological spectrum of the disease. It divides leprosy into five clinically and histologically recognizable groups based on the distribution of epithelioid cells, Langhans giant cells, foam cells, globi, lymphocytes, plasma cells, fibroblasts, a clear sub-epidermal zone, cellular cuffing and infiltration of nerves. The histopathological criteria for sub-classification of leprosy as defined by Ridley and Jopling have been applied to cytological smears by Singh et al. [4] They could place most of their patients in the same group as on histopathology.

Out of the 53 patients of leprosy in whom histopathology was done, 41 (77.3%) showed correlation of cytomorphological features with clinico-pathological diagnosis. In the remaining 12 patients (22.1%) there was poor correlation, possibly because of incorrect site selection. Moreover, this number might have been less if aspirates had been taken from multiple sites, as was observed by Singh et al. [2],[8]

Hence, it may be concluded that there is a fairly good correlation between the clinical, histological and cytomorphological features of skin aspirates and that it is possible to classify leprosy along the R-J scale based on cytological smears. Thus, in endemic areas, especially where histopathological services are not available, cytomorphological assessment of leprosy lesions may be advocated as a simple tool for evaluation of the primary diagnosis and natural course of the disease.