Generalized hyperpigmentation of skin: A case of Carpenter syndrome

Hypermelanosis of skin and mucosae occurs in various endocrine disorders involving adrenal, thyroid and pituitary gland and can provide a clue to their diagnosis.[1]

A 45-year-old woman presented with complaints of darkening of skin color over the last 6 months. Hyperpigmentation started initially over the face and later progressed to involve palmar creases, knuckles and oral mucosa. She was a known case of hypothyroidism on treatment. Further history revealed dizziness on standing position, easy fatigability, polyuria, constipation and cold intolerance. She had irregular menstrual cycles occurring once in 6 months to 1 year. On general examination, she had thyromegaly. Vitals were stable except for postural hypotension. Dermatological examination showed generalized hyperpigmentation of skin with accentuation over the dorsae of hands, knuckles and palmar creases [Figure - 1] and [Figure - 2]. It was associated with hyperpigmentation of lips, buccal mucosa and tongue [Figure - 3]a. With these findings, a clinical diagnosis of Addison's disease was considered and the patient was investigated. Blood reports and imaging studies confirmed the diagnosis of primary adrenal insufficiency [Table - 1]. With a history of hypothyroidism, irregular menses and adrenal insufficiency, autoimmune polyglandular involvement was suspected. On further evaluation, her serum thyroid-stimulating hormone, follicle-stimulating hormone and luteinizing hormones were elevated and estradiol was low. Fine-needle aspiration cytology of thyroid showed Hashimoto's thyroiditis. Serum blood sugars were normal but the C-peptide level was reduced. Among the antibodies screened anti-thyroid peroxidase and anti-glutamic acid decarboxylase were positive [Table - 2] and [Table - 3]. With the absence of mucocutaneous candidiasis and primary involvement of thyroid, adrenal, ovary and pancreas, the diagnosis of Carpenter syndrome was confirmed. She was treated with hydrocortisone 100mg TDS and fludrocortisone 100μg OD, and levothyroxine 50μg. She was discharged with an advice for a regular follow-up of blood sugars, educated about symptoms of diabetic ketoacidosis and the need of insulin requirement in the future. The need for increased dosage of steroid requirement at the time of stress, infections and surgery was emphasized. After three months, her skin and mucosal hyperpigmentation had improved [Figure - 3]b and [Figure - 4]. Serum thyroid-stimulating hormone, luteinizing hormone, follicle-stimulating hormone and adrenocorticotrophic hormone values had normalized. She developed type-I diabetes mellitus and was started on injectable insulin. 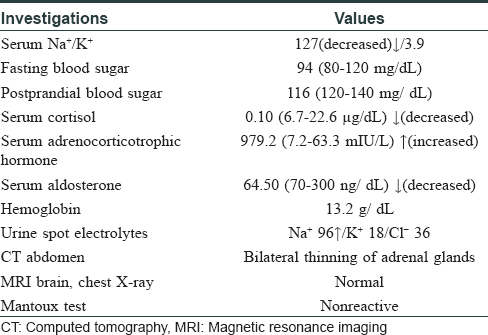 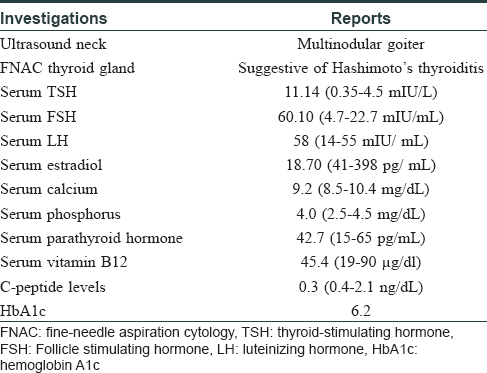 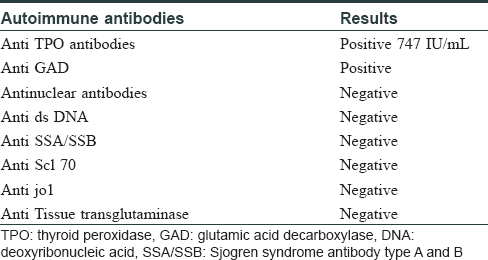 Generalized hyperpigmentation of skin and mucosae gives a clue for evaluation of various systemic conditions like Addison's disease, vitamin B12 deficiency, HIV infection, drugs, malignancy, metabolic and autoimmune disorders.[2] In our patient, after a thorough investigation, she was diagnosed with autoimmune polyglandular syndrome II. It is characterized by the occurrence of primary adrenal insufficiency, autoimmune thyroid disease (Schmidt's syndrome) and when associated with type-I diabetes mellitus it is labeled as Carpenter syndrome.[3] All glandular symptoms may not present at the same time. Generally, thyroid gland involvement precedes involvement of other glands with a shorter latency period for Addison's disease and longer latency period for type-I diabetes mellitus, as occurred in our patient.[4] In Addison's disease due to loss of negative control over the hypothalamus, the release of corticotrophin-releasing hormone thereby proopiomelanocortin increases. This, in turn, increases melanin production by epidermal melanocytes leading to hyperpigmentation of skin and mucosa.[5] The diagnosis of Addison's disease is most often made when a patient presents with an adrenal crisis.[6] However, in our patient, this was prevented by evaluating her for Addison's disease in the background of generalized hyperpigmentation of the skin. Because of the involvement of two endocrine glands, workup was done to rule out autoimmune polyglandular syndrome. This helped in the diagnosis of late onset autoimmune diabetes of adults which is otherwise known as type 1.5 diabetes. It is defined as a slowly progressive autoimmune type I diabetes presenting in the 3rd or 4th decade of life. This is often misdiagnosed as type-II diabetes mellitus with poor response to treatment with oral hypoglycemic agents.[7] C-peptide levels and autoantibodies help in differentiating type-I and II diabetes mellitus. Low C-peptide levels represent reduced insulin production due to immune destruction of β-cells of the pancreas, whereas the C-peptide level is raised or normal in type II diabetes mellitus. In our patient after correction of adrenal insufficiency, the underlying type I diabetes mellitus was unmasked.[8] The diagnosis of late-onset autoimmune diabetes of adult was of great importance in starting her on insulin and preventing her from acute diabetic ketoacidosis.[9]

Altered pigmentation of skin and mucosa, either generalized hyperpigmentation or vitiligo vulgaris with co-existence of other endocrine dysfunction should alert the dermatologist for autoimmune polyglandular syndrome screening. The presence of antibodies in the blood precedes the clinical manifestation. Hence, yearly follow-up with blood investigations is recommended. Family members are also at a risk of developing autoimmune polyglandular syndrome, therefore should be screened and followed up.[10]