Genital discharge, human papillomavirus screening and contraceptive use in a tertiary care hospital in Mumbai, India

Reproductive tract infections/sexually transmitted infections are a major burden on developing countries due to lack of awareness among women regarding the availability of diagnostic and treatment facilities. The overall human immunodeficiency virus prevalence in India has diminished following interventions by the National AIDS Control Organization, a division of the Ministry of Health and Family Welfare, Government of India. However, no report has been published since the implementation of several intervention programs by the Government of India to control reproductive tract/sexually transmitted infections.[1] Thus, the objectives of this study were to document the epidemiology of vaginal discharge and human papillomavirus (HPV) screening in a metropolitan city like Mumbai, India and to evaluate the use of contraceptives among women.

This prospective study was conducted with the approval of institutional and collaborating hospital's ethics committees. We enrolled women (18–60 years) visiting the outpatient department of Obstetrics and Gynecology, Seth Gordhandas Sunderdas Medical College and the King Edward Memorial Hospital, Parel, Mumbai from July 2012 to June 2017 with complaints of leucorrhea, recurrent spontaneous abortion, primary or secondary infertility, burning micturition and abdominal pain and seeking advice regarding family planning or medical termination of pregnancy after obtaining written informed consent. Women who were menstruating or infected with human immunodeficiency virus, hepatitis B/C virus, or autoimmune diseases as recorded in their clinical history were excluded. Each patient was subjected to detailed history taking including marital age, literacy, number of children and use of contraceptives. We collected endocervical specimen from each participant in 1ml phosphate buffer saline using cytobrush and another specimen from posterior fornix using cotton swab to make a smear for screening of bacterial vaginosis using Nugent's score and to detect Candida infection. Each specimen in phosphate buffer saline was microscopically examined for Trichomonas infection and was evaluated for the presence of adequate number of epithelial cells to extract deoxyribonucleic acid. Polymerase chain reaction was performed on extracted deoxyribonucleic acid using primers designed from the conserved region of major outer membrane protein gene of Chlamydia trachomatis with sense primer: 5' GCC GCT TTG AGT TCT GCT TCC 3' and anti-sense primer: 5'GTC GAA AAC AAA GTC ACC ATA GTA 3' to amplify a 180 base pairs deoxyribonucleic acid fragment common to all serotypes,[2] while consensus primers designed from the L1 region of capsid protein were used to amplify a 450 base pairs product to detect HPV infection.[3] Specific probes were used for the typing of high-risk HPV 16 and 18.[4] Chi-square test was performed for correlating all infections with factors such as age, age at first intercourse (age at marriage), parity and coinfections using IBM Statistical Package for the Social Sciences (SPSS) v.19 software.

In this study, 1417 women were enrolled with a mean age of 32±8.1 years. The total infection rate varied from 18.4% to 29.7% over the study period [Figure - 1] and [Table - 1]. Among the total 1417 smears collected, 219 were judged inadequate. These numbers constituted screen failures only for bacterial vaginosis and Candida infection. Vaginal dryness, possibly due to menopause, at the time of specimen collection might have resulted in insufficient quantity of specimen on the swabs. Screening of remaining 1198 specimens indicated the presence of Candida infection in 143 (11.9%) women and bacterial vaginosis in 88 (7.4%) women, while 100 [8.4%] women with a Nugent's score of 4-6 due to presence of few lactobacilli along with gram variable species and clue cells were reported as intermediate for bacterial vaginosis. Highest prevalence of bacterial vaginosis (16.1%, 14/87) was recorded in 2017, whereas the overall prevalence across 5 years was 7.4% (88/1198). We also observed higher prevalence of bacterial vaginosis in younger women (18–30 years) [Table - 2]. We observed only one woman infected with trichomoniasis, thus, indicating its low prevalence. HPV infection was detected in 100 (7.1%) women (n = 1406), demonstrating a waning course over the years. High-risk HPV-16 and HPV-18 were detected in 18 (1.3%) and 6 (0.4%) women, respectively, while 17 (1.2%) women were infected with both strains. Around 26 (1.8%) women were infected with Chlamydia trachomatis. The coexistence of multiple infections was low (22/357; 6.2%) during our 5-year study period. One woman had bacterial vaginosis, Candida and HPV infection, nine had both bacterial vaginosis and Candida, seven had Candida and HPV; four had HPV and bacterial vaginosis while one had Candida and Chlamydia trachomatis infections. 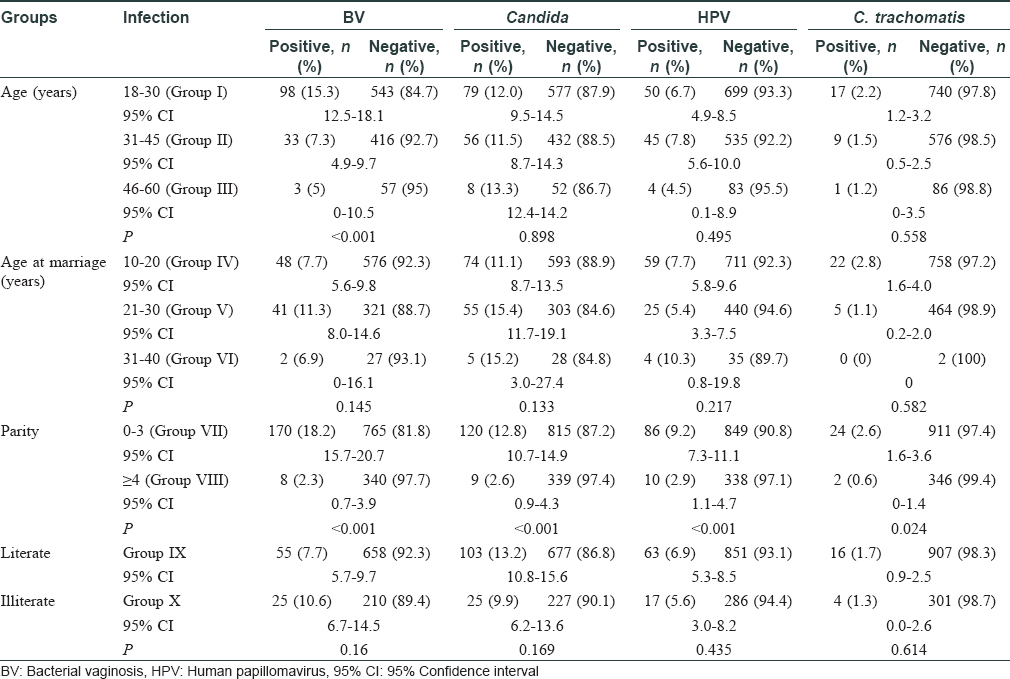 Besides screening infections, we also analyzed contraceptive use in these women (n = 951) and it was observed that only 221 (23.2%) women used some form of contraception; tubal ligation in 139 (62.9%) cases being the commonest. A significantly high proportion of women using intrauterine devices developed bacterial vaginosis [Table - 3]. Only 13 women recalled irregular condom use by their spouse. It was previously reported that 61.1% of 4090 women did not use any birth control method.[5] Thus, this study further highlighted that the overall use of contraceptives remained low over the years.

Table 3: Comparison of different etiologic agents of vaginal discharge in women with or without different methods of contraceptives

The prevalence of bacterial vaginosis and candidiasis in the present study was comparable to previous studies done in Indian settings. An earlier study (2006–2007) in 358 women reported a 21.5% prevalence, while the same extended study on 510 women (2008) revealed 14.1% cases of bacterial vaginosis.[6] In a study among 300 woman sex-workers, the prevalence of bacterial vaginosis and candidiasis was 13.3% and 10.3%, respectively during 2005–2006, while another study from the same region, published in 2009 with 51 women reported a Candida prevalence of 14% and 12% in urban and rural regions, respectively along with a similar urban (24%) and rural (25%) prevalence of bacterial vaginosis.[7],[8] All these studies were conducted before the inception of reproductive tract/sexually transmitted infections guidelines in 2007 for syndromic management of these conditions. Hence, these rates seem to be high compared to our observations. However, the recent increase in bacterial vaginosis, especially in younger women, is a concern as it is associated with infertility.[6] We anticipated Candidiasis to be more prevalent in Mumbai due to poor and unsatisfactory living conditions. However, screening and treatment for Candida should be performed routinely to prevent associated morbidity.

Systematic reviews and meta-analysis of Indian studies on HPV-16/18 detected a 5% prevalence in the general population.[9] Present study also indicated similar prevalence for HPV (7.1%, n = 100) [Table - 1]. However, considering the vast population of India, screening for HPV virus infection should be implemented, as its vaccination program is yet to be started. It is also reported that a single round of HPV testing in women is associated with a significant reduction in the number of advanced cervical cancers and death.10 Chlamydia trachomatis infection rate (1.6%, n = 16) was similar to a recent report in 1000 asymptomatic pregnant women.[11]

The presence of coinfections in 22 (6.2%) women emphasizes the need for documentation and treatment of such cases wherever screening programs for reproductive tract/sexually transmitted infections are available. In our study, low parity was significantly associated with these infections as reported earlier in women with less than three children.[12]

Our study was limited by the inclusion of women irrespective of their clinical presentations, while all hailed from a low socioeconomic background. Sexual history, high-risk behavior, number of sexual partners, practicing sex for money (commercial sex workers) and status of partners (monogamy or polygamy) were not considered in our study, as all women refused to disclose such information. Another important limitation was the absence of screening for other sexually transmitted infections such as syphilis, Neisseria gonorrhea, mycoplasma and ureaplasma. To conclude, this study highlights the current prevalence of different etiologic agents of vaginal discharge and overall contraceptive use among a cohort over a 5-year period. It emphasizes the importance of continuous screening facilities to restrict these infections and enhancing the implementation of family planning programs. According to our study, although the prevalence of such infections is low, we should abide by the National AIDS Control Organization guidelines regarding syndromic management and screening wherever possible, to minimize the occurrence of these infections.

The authors certify that they have obtained all appropriate patient consent forms. In the form, the patients have given their consent for their images and other clinical information to be reported in the journal. The patients understand that their names and initials will not be published and due efforts will be made to conceal their identity but anonymity cannot be guaranteed.