Granuloma annulare on the palms: A clinicopathological study of seven cases

Background : Granuloma annulare (GA), a common dermatological condition of unknown etiology, affecting all ages. Involvement of the palms appears rare, posing a diagnostic challenge. This study was conducted to document various clinical and histopathological features of GA on the palms. Aims: To study clinical and histopathological variations in granuloma annulare on palms. Methods : A total 7 patients from our outpatient department with lesions of GA, exclusively on the palms, were studied over a period of 6 months from March 2011 to August 2011. Total of 8 biopsies were studied. In each patient, diagnosis was made on clinico-pathological correlation. Various clinical and histopathological features were analyzed. Results: An average age of onset was 47 years, male: female ratio was 1.33: 1, and average disease duration was 9 months. Pain was the most common symptom. Clinically, the most common presentation was pseudovesicles. Histologically, both classic palisading and interstitial pattern were seen. Perineural granulomas, perieccrine granulomas, elastophagocytosis were seen additionally. In 5 out of 7 patients, diagnosis was missed clinically. Conclusion: GA on palms poses a diagnostic challenge due to variable presentations. Histopathology is of vital importance for correct diagnosis and treatment. GA should be considered in differential diagnosis of papular lesions on palms.
Keywords: Clinico-pathological study, granuloma annulare, palm

Granuloma annulare (GA) is a common, benign skin condition, described first over a century ago, but still remains an enigma with respect to etiology, associated systemic diseases and treatment. A number of clinical variants have been classified. Involvement of palms in GA is rare. [1] Palmar GA has varied morphological presentations and poses a diagnostic challenge. Skin biopsy is of vital importance to make the correct diagnosis and treatment in such cases. We studied 7 patients of GA on palms over a period of 5 months. The aim of the present study was to characterize various clinical presentations and histopathological variations in lesions of GA on palms.

A total of 7 patients from our outpatient department with lesions of GA exclusively on palms, with or without any other skin disease were enrolled over a period of 5 months. All the patients were subjected to detailed history, clinical examination and skin biopsy after an informed consent. In each patient, the diagnosis was made based on clinico-pathological correlation. Clinical variables, such as age, sex, duration of disease, symptomatology, type of lesions, distribution of lesions over palms, previous treatments taken if any and previous clinical diagnosis were studied. Variables considered in histopathological examination included epidermal changes, pattern of infiltrate, type of infiltrate, vascular changes, collagen and elastin tissue alterations, appendageal involvement and dermal mucin. Findings from all the patients were tabulated and analyzed to characterize various clinicopathological features of GA on palms.

We identified a total of 7 patients of GA with lesions exclusively on palms over a period of 5 months.

An average age of disease onset was 47 years. The youngest patient was 42 year old while the oldest was 74 year old. Males were more commonly affected than females with a male: female ratio 1.33:1.

An average duration of disease was 9 months with the shortest duration being 1 month while the longest being 3 years. 4 out of 7 lesions were recurrent with variable interval between episodes. No other associated skin disease was seen in any patient. 1 patient had history of insulin dependent diabetes since 10 years, and 1 patient had history of chronic low backache and was on aceclofenac, paracetamol and calcium supplement. Pain was the most common symptom, seen in 4 out of 7 patients, followed by itching in 2 out of 7 patients while 2 patients were asymptomatic.

Nail involvement was seen in 1 patient. Blackish discoloration of nails with nail dystrophy and Beau′s lines were seen [Figure - 1]. Patient complained of repeated attacks of subungual pain and swelling of digit, which used to start simultaneously with lesions on palms and leading to nail dystrophy subsequently. Potassium hydroxide mount and culture from nail scraping were negative for fungal elements. Patient denied nail biopsy and occurrence of GA in nail matrix with subsequent nail dystrophy was speculated though not confirmed.

Common site affected on palms were finger tips followed by thenar and hypothenar eminence, lateral sides of fingers. In 2 patients, lesions were symmetrical while asymmetrical lesions were seen in remaining 5 out of 7 patients.

Various morphological variants seen and their percentage are shown in [Table - 1].

A total of 8 biopsies were obtained from palmar region of 7 patients. Almost all biopsies showed characteristic features of granuloma annulare with some additional features in 2 cases.

Abundant solar elastosis with elastophagocytosis was seen in a patient, presenting with hyperkeratotic papules with collarette scales [Figure - 5] along with an interstitial pattern of GA. Presence of elastotic material within multinucleated giant cells was confirmed by Verhoff von-Gieson stain [Figure - 7].

In 4 out of 7 patients, histopathology showed classical GA with palisading granuloma around mucin deposition and areas of collgenolysis. Presence of mucin was confirmed by alcian blue stain at pH 2.5 [Figure - 8].

A mixed pattern with both interstitial and classical palisading granulomas was seen in 1 patient. There was also thickening and degeneration of collagen bundles [Figure - 9]. No subcutaneous GA was observed in our study.

In patient, who presented with keratotic papules with central plug, perforation of epidermis was seen histologically. The perforating material was composed of degenerated collagen, mucin and granulomatous infiltrate [Figure - 10]. An interstitial pattern of GA with interstitial lymphohistiocytic infiltrate and mucin deposition, without formation of proper palisades, was seen in 2 out of 7 patients [Figure - 11]. No major vascular changes were observed in our study, except for endothelial swelling in 2 cases. Few eosinophils and plasma cells were seen in 2 cases only. Also, neutrophilic nuclear dust was seen in 2 cases. 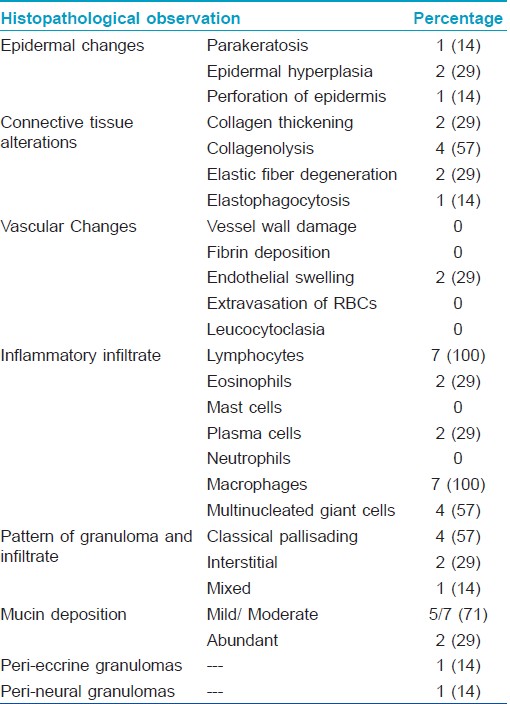 Granuloma annulare (GA) is a benign, relatively common cutaneous disease that classically presents as localized clusters of small papules, coalescing to form annular plaques. It often occurs symmetrically, and lesions are typically asymptomatic. 2/3 rd of patients are under 30 years of age, and it is approximately twice more common in females than in males. Numerous clinical variants of GA have been described with overlapping features including generalized, papular, nodular, patch, perforating and subcutaneous GA.

It often favors acral sites such as the dorsum of the hands, elbows, and feet and involvement of the palms appears to be rare. [1]

GA on the palms has variable clinical presentations, and diagnosis may be missed without histopathology. In our study, diagnosis was missed clinically in 5 out of 7 patients.

Various epidermal changes seen included, perforation of epidermis with transepidermal elimination of altered collagen in 1, parakeratosis in 1 and epidermal hyperplasia in 2 cases. Irregular epidermal acanthosis and epidermal atrophy has been reported to occur in GA. [2],[3]

The term AEGCG was proposed by Hanke et al., in 1979 and includes the lesions previously called actinic granuloma of O′Brien, atypical necrobiosis lipoidica and Miescher′s granuloma. Our observation of solar elastosis with elastophagocytosis gives credence to the speculation that AEGCG is not a separate entity, but granuloma annulare occurring on sun exposed areas. Moreover, elastophagocytosis is also seen in other conditions like temporal arteritis, sarcoidosis etc. and is not a specific feature. [2],[4],[5] Thus, the various confusing nominations like, AEGCG, actinic granuloma of O′Brien and granuloma disciform[is of face (Miescher′s granuloma) seems to be superfluous and should be avoided.

We found collagen tissue alteration like collagen thickening, increased basophilia, loss of normal fibrillary structure and collagenolysis was seen in 2 and 4 out of 7 cases. Günes et al ., found collagen degeneration of varying intensity in all 38 biopsies they studied and proposed that primary events in the pathogenesis of GA involve collagen as well as elastic fiber damage. [2],[4] In study by Stefanaki et al., also, necrobiosis with collagen degeneration was constant histological finding, irrespective of depth of infiltrate. [6] In a study by Yun et al., 28 out of 54 patients showed necrobiotic collagen with classic palisading granulomas while interstitial pattern without much collagen alteration was seen in 26 patients. [7]

Occurrence of mitotic figures in GA is rare but well-known feature, and 1 to 7 mitotic figures per 10 high-power fields have been reported. Recognition of this is important to avoid over diagnosis of malignant conditions, especially epitheloid sarcoma. [11] No mitotic figures were seen in any specimen of our study.

One of the interesting finding seen in our study was presence of peri-eecrine and perineural granulomas in a biopsy from a patient who complained of severe pain. These findings were not present initially, but were seen in a repeat biopsy done during an acute episode of the same patient who showed classical palisading granuloma initially.

A case of a granulomatous drug reaction with GA-like lesions of the palms as well as the legs in a 64-year-old woman, occurring 13 days after starting amlodipine and clearing within 3 months of drug cessation has been reported. [12] 1 of our patients was taking aceclofenac-paracetamol combination along with calcium supplements with antacids before getting lesions on palms. However, she had been taking these since 1 year prior to the sudden onset of her skin lesions, making these a less likely cause of her eruption. She also lacked the extra palmar, intertriginous annular plaques that clinically typify interstitial granulomatous drug reactions.

In conclusion, GA on palms has got varied clinical presentation, and diagnosis is often missed clinically. Histopathology is important in diagnosis of such cases to avoid unnecessary treatments. Histopathological features seen in our study were comparable to studies on generalized GA. Solar elastosis, elastophagocytosis, peri-neural and peri-eccrine granulomas were additional features found in our study.