Hand dermatitis in beauticians in India

One hundred and sixty-one beauticians and hairdressers (146 women and 15 men) were examined for the presence of hand dermatitis and those with hand eczema were patch tested with a battery of antigens standardised for beauticians. Forty-two (26.1%) subjects were found to have hand dermatitis and of these, in 31 (69.3%) the patch tests were positive; the following antigens elicited a positive response; paraphenylene diamine (35.5%), rubber antigens (22.6%), nickel (22.6%), shampoos (12.9%), ammonium thioglycollate (9.7%), ammonium persulphate (3.2%), henna mixture (3.2%) and detergents (6.5%). In addition, irritant reaction was seen in 7; in 5 patients it was to shampoos and in 2 to ammonium persulphate. Of the 8 patients who, on questioning, had a history of atopy, 7 (87.5%) had hand eczema, while 1 (12.5%) did not, and this difference was statistically significant (p < 0.001), suggesting that beauticians with a history of atopy were more likely to develop hand eczema.
Keywords: Occupational dermatosis, Allergic dermatitis, Irritant dermatitis 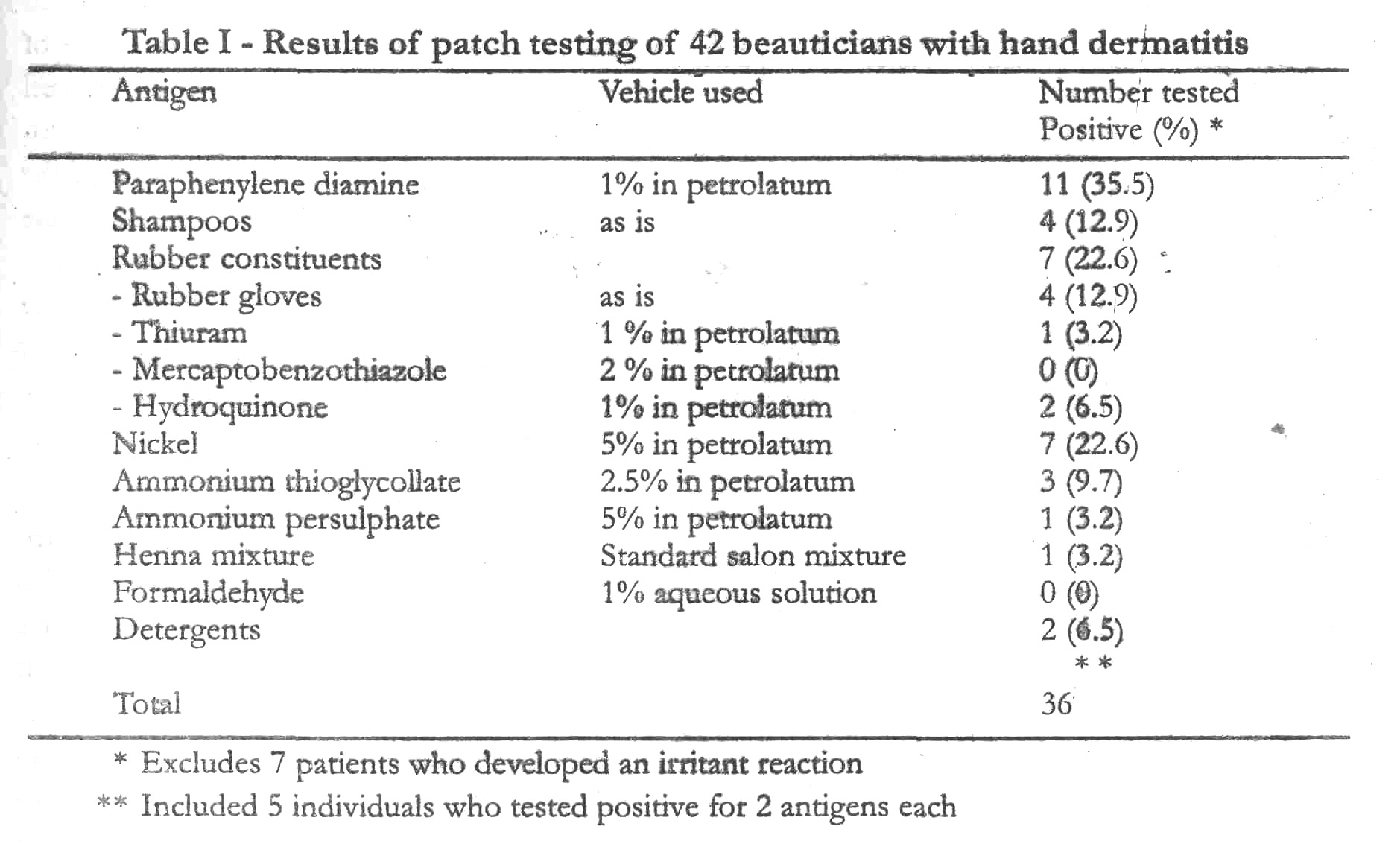 Beauty culture is not an organised profession in India. Most beauticians work in small salons, usually operating from their homes. Only a very few work in larger salons or in beauty parlours placed in hotels. Similarly, a majority of beauticians never receive any formal training or certification. A few beauticians, however, after training in recognised government or private organisations do receive certification.[1]

Beauticians are involved with a number of chores during their job and are exposed to several chemicals; dermatitis is, therefore, fairly common. It is primarily the hair care tasks that account for the high rate of occupational hand dermatitis in beauticians.[2]

There is a dearth of data available on occupational hand dermatitis in beauticians in India. This study was undertaken to find the prevalence and cause of this problem.

One hundred and sixty-one beauticians and hairdressers, were taken up for the study. There were 146 women and 15 men. Twelve women and all the men were exclusively involved with the hair care tasks. Forty-two subjects were employed in large salons in either prestigious hotels or in commercial areas, while 119 were working in small salons operating from homes. All the males were employed in large salons. Seventy-five (46.6%) of the subjects were apprentices, being in the profession for less than one year.

The subjects were questioned regarding the chores they performed and the chemicals which they handled. Hand dermatitis was looked for and the co-existence of dermatitis in other parts of the body was recorded. They were specifically questioned on the presence of atopy.

The subjects who had hand dermatitis were patch tested with a battery of antigens standardised for beauticians [Table - 1]. The patch tests were done using antigen impregnated discs for aqueous or antigen containing saucers (for antigens in petrolatum). For rubber, in addition to standard antigens mentioned, a silver of glove was used directly. Solon shampoos were tested in an open test. The patches were read at 48 hours and in doubtful cases at 72 hours. If no cause could be ascertained by this, subjects were further tested with other suspected allergens.

The hands were the only site of eczema in 28 (66.7%) of the subjects. Forearms, in addition, were involved in another 4 (9.5%) patients. Ten (23.8%) patients gave history of eczematous lesions on other parts of the body as well. Of these 10, seven had history of exudative lesions on the ear lobules and history of itchy papular lesions in the forearms and neck. Three patients had lesions on the eyelids apart from their hands.

The changes seen on the hands consisted of redness, dryness and scaling over the metacarpophalangeal joints, and adjacent parts of the backs of the fingers and fingertips with similar changes in the finger webs. As the dryness increased, the skin became fissured and if the cracks were deep, they bled.

[Table - 1] shows the results of patch testing in 42 subjects.

Eight (5%) of the 161 beauticians had history of atopy. Of these 7 (87.5%) had hand eczema. Four of these were allergic to nickel alone, one to both nickel and shampoos and one to nickel and hair dyes. One patient reacted positively to hair dyes and piece of rubber glove. It was found that 7 (16.7%) out of the 42 patients with hand eczema had history of atopy, as compared to 2 (0.8%) out of 119 of patients without had eczema. This difference was statistically highly significant (p= < 0.001), suggesting that beauticians with atopic dermatitis were more likely to develop hand eczema.

In India, beauticians operate predominantly from homes, where 1-2 trained women work either with, but generally without, apprentice help. There are, however, also elite beauty parlours where several beauticians and hairdressers function together with several trainees who after undergoing training either start out on their own or get absorbed in large established salons.[1]

Beauticians perform a variety of personal care tasks including hair care and grooming, manicuring and applying makeup. During their apprenticeship, the beauticians usually are involved with shampooing of hair, manicuring and pedicuring and occasionally application of hairdyes. In general they do not wear rubber gloves, since gloves pull the client′s hair and are uncomfortable for the customer. After their training is over, beauticians perform more specialised tasks like perming, dyeing, bleaching and setting of hair, facial massages and application of makeup.

In this study it was found that 42 (26.1%) of beauticians had hand dermatitis and in 36 (85.7%), it was related directly to their occupation. Of these, 29 (69%) subjects were allergic to one or more of the chemicals being handled by them while in another 7, the subjects showed an irritant reaction on patch testing. Two subjects had positive patch tests to detergents and this could be related either to occupational contact or could be due to domestic contact. These two girls were using detergent powder to wash strips of clothes used for waxing. Twenty-four (57.1%) of the 42 patients who had hand dermatitis developed their problem during their apprenticeship. Five of these apprentice subjects were found on patch testing to have an irritant reaction of shampoos. Shampoo reactions are understandably more common in apprentices, because they spend a large part of their working time shampooing clients hair, sometimes performing as 20 shampoos in a day.[3] Most of the time they do not wear gloves since washing hair then becomes cumbersome. Apprentices are also involved in pedicuring and manicuring tasks which also entail prolonged contact with shampoos. James and Calnan also found that 62% of the beauticians who had hand dermatitis, developed their problem in the first year.[3]

Hairdyes formed the commonest cause of hand dermatitis. Nine out of the 11 beauticians who were positive to paraphenylene diamine were trained beauticians. Clients generally do not allow trainees to dye their hair; there is therefore less chance of sensitisation in apprentices to hairdye constituents. James and Calnan found that 32% of the 84 hair dressers who were patch tested with hairdyes showed a positive response.[3]

Seven (18.4%) positive tests were seen with rubber and rubber constituents. Six of these were in trained individuals. Trainees usually do not wear gloves since they are predominantly involved in "menial" tasks like shampooing of hair. Nickel was another antigen which tested positive in 7 (18.4%) subjects. The source of nickel in the "beauty profession" is stainless steel pins, clips and scissors. All these patients also gave history of dermatitis in other parts of the body like forearms, ear lobes and neck; these areas often came in contact with costume jewellery which these girls frequently wear. There is evidence that permanent waving solutions may leach nickel out of metal objects, thereby increasing availability of nickel.

Ammonium thioglycollate is used for permanent waving of hair. It usually caused an irritant reaction, but allergic sensitisation can also occur.[5] Three trained beauticians were sensitive to permanent wave lotions. Since waving of hair requires expertise, not many of the apprentices handled ammonium thioglycollate. Hair bleaches containing ammonium persulphate with hydrogen peroxide also generally cause an irritant dermatitis.[5] Two patients in this study showed an irritant reaction to ammonium persulphate while one showed an allergic reaction.

Allergy to henna is rarely described. There is a report of henna having caused contact sensitivity when used for cosmetic decoration of hands.[6] There is, however, no report of henna causing allergic reaction when used as hair dye. In salons when henna is used either as a hair dye or as a conditioner, it contains several herbal additives like "amla", walnut shell powder, and other herbs. So the positive patch test could well be an allergic reaction to one of the additives.