Background: Hand eczema is a common distressing condition aggravated by a number of endogenous and exogenous factors. Various morphological forms of hand eczema have been described, but categorization into one of them is not always possible. Aims: To study the morphological patterns of hand eczema, relationship of atopy with hand eczema, and the implications of contact sensitization with respect to severity and diagnosis of hand eczema. Methods: Hundred consecutive patients of hand eczema attending the contact dermatitis clinic of the institute were recruited over a two year period from 2004-05. Objective assessment was done using hand eczema severity index (HECSI) and all the patients were patch tested using Indian standard series. Results: Unspecified type of hand eczema with no definite morphologic picture was seen in 62% followed by pompholyx in 14%. Hand eczema severity was not found to be statistically associated with age, sex, and atopic status of the patient. Positive patch test to one or more allergen was present in 65% of patients. The most common allergens were potassium dichromate (25%), fragrance mix (16%), nickel sulphate (14%), and PPD (13%). There was no significant correlation between patch test positivity and hand eczema severity or atopic status of the patient. Among the morphological patterns pompholyx was strongly associated with an atopic status (P=0.004). Conclusions: Hand eczema was seen twice more commonly in men. Atopic and non-atopic patients of hand eczema had no difference in the severity of disease. Contact sensitivity to different allergens did not correlate with increased eczema severity.
Keywords: Atopy, contact sensitivity, hand eczema, morphologic patterns

Hand eczema is a common distressing condition giving rise to a lot of emotional and physical morbidity. Its one year prevalence in the general population has been assessed to be 9.7%. [1] The morphological patterns of hand eczema described are pompholyx, recurrent focal palmar peeling, ring eczema, fingertip eczema, hyperkeratotic eczema, apron eczema, chronic acral dermatitis, and gut eczema. Various endogenous and exogenous factors contribute to the development of hand eczema. Among endogenous factors atopy and among exogenous factors, contact sensitization to different allergens has been the most widely investigated. Patch testing is considered mandatory in all patients of hand eczema lasting for more than four weeks in order to identify a specific cause if present and counsel the patients accordingly. [2] The frequency of contact sensitization in hand eczema patients varies from 23% in mild cases to 62% in severe cases. [3],[4] The role of contact sensitization in increasing the severity of hand eczema has not been evaluated. Also, the role of specific allergens in different morphological forms of hand eczema is understudied.

In the present study, we have studied the morphological patterns of hand eczema, relationship of atopy with hand eczema and implications of contact sensitization with respect to the severity and diagnosis of hand eczema.

Hundred consecutive patients of hand eczema attending the contact dermatitis clinic of our institute were recruited for the study between 2004 and 2005 and those with acute eczema and those on systemic steroids were excluded. One of the senior and experienced clinical investigators helped to exclude the conditions like psoriasis, lichen planus, scabies, and dermatophytosis clinically. The study was approved by the Institute Thesis committee. A detailed demographic profile, history of present ailment, occupation, hobbies, aggravating factors, and the presence of atopy was recorded for each patient. Morphological classification was done into the different categories described previously.

Further objective assessment of the severity of hand eczema was done using hand eczema severity index (HECSI). [5] All patients were patch tested using Indian standard series approved by the Contact and Occupational Dermatoses Forum of India (CODFI) consisting of 28 allergens. Finn chambers were used for patch testing which was done on the upper back of patients. Readings were taken after 48 and 72 hours and interpreted according to the International Contact Dermatitis Research Group criteria. [6]

Data was processed and analyzed using SPSS-19.1 software. Chi-square test was used for the statistical analysis of the data. 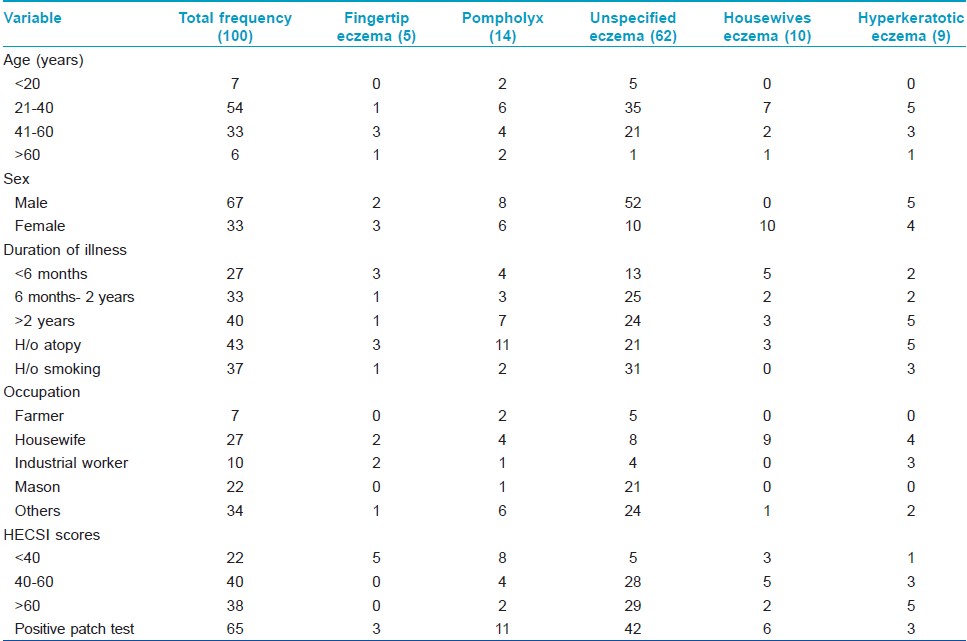 Table 1: Clinico-epidemiological profile of the various types of hand eczema

Patients with unspecified eczema had significantly high HECSI scores of >60 (P<0.01) and those with fingertip eczema had low HECSI scores of <40 (P<0.01). Patients with hyperkeratotic eczema also had severe disease with more than half of them having HECSI >60, which however did not attain statistical significance. Age, sex, and atopic status of the patients were not significant risk factors for a higher HECSI (P=0.896, 0.149, and 0.409, respectively).

Patch test to one or more allergens was positive in 65 patients, out of which 44 were men and 21 were women and 30 were atopic and 35 were non-atopic. A total of 127 positive patch tests were elicited in the study. Of these, 59.8% were relevant and in 40.2% the relevance could not be established. Potassium dichromate was the most common allergen (25%), followed by fragrance mix (16%), nickel sulphate (14%) and PPD (13%) [Table - 2]. Nickel sensitivity was found to be statistically higher in atopics as compared to non-atopics (P=0.04). Overall, no significant correlation was found between atopic status and contact sensitization. 78.5% of patients with pompholyx and 67.7% of patients with unspecified hand eczema had positive patch test to one or more allergens. Out of 65 patients with positive patch test, 25 had HECSI >60, 25 had between 40-60 and 15 had <40. On statistical analysis, patch test positivity did not correlate with the severity of hand eczema (P=0.897), and also there was no increase in HECSI in patients with multiple patch test positivity (P=0.875). 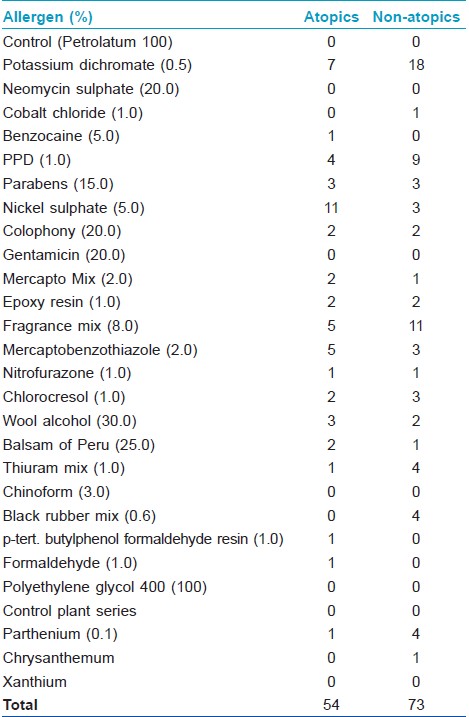 Recent years have seen an increase in the incidence of hand eczema in men, and a similar trend was seen in our study (M:F:2:1) also. [7],[8] Most patients (54%) in our study were in the age group 21-40 years. In both men and women, hand eczema has been rarely observed earlier than 20 years and later than 61 years of age. [9] In our study of 100 patients, only 7 were of age less than 20 years and 6 were more than 60 years of age. Old individuals have various defects in induction and/or elicitation of allergic contact dermatitis which may explain this observation. [10] The apparent hypo responsiveness of children may be due to the limited exposure. [11]

Risk of hand eczema is found to be higher in industrial workers, masons and housewives because of exposure to various chemicals. [8],[12] In our study, 27 patients were housewives, 22 were masons, and 10 were industrial workers. The average duration of disease in our study was 48.4 months, similar to that reported by other Indian authors but is much less than that reported from developed countries. [7],[8] The reason for the delayed presentation in developed countries may be the differences in the socioeconomic and cultural background, presence of industrial protection acts and better safety equipments. The absence of social security system in India results in continuous exposure of patients to the occupational allergens because of their inability to change their professions easily.

Patch test to one or more allergens was positive in 65% of our patients, in contrast to 85% reported by Samahy et al. [13] The most common allergens yielding positive results were potassium dichromate (25%) followed by fragrance mix (16%), nickel sulphate (14%) and PPD (13%). Of the 40 patients having hand eczema for more than 2 years, 28 (70%) had positive patch tests, while only 14 out of the 27 patients (51.8%) having hand eczema for less than 6 months showed positive patch test results. This is similar to an observation made earlier by Latinga et al. [14] This indicates that many cases of eczema are initially irritant in nature but may later get complicated by sensitization.

Potassium dichromate as a common sensitizer in hand dermatitis has been reported by various workers. [8],[15] This is especially true in developing countries, where legislation regarding the addition of ferrous sulphate to cement may simply not exist. Chromate sensitivity has been traditionally associated with manual labor and masonry, as was seen in our study. Of the 25 chromate sensitive patients, 22 were masons. The second most common allergen was fragrance mix. Fragrances have been reported to be causing hand eczema in many previous studies. [16] Detergents, soaps, and cosmetics have been attributed to be the cause of this sensitivity. Allergy to nickel sulphate was found in 14% of patients. Nickel has been reported to be the most common sensitizer in many studies. [17] Female sex and wet work are important risk factors for the development of nickel allergy. [18] In our study, 11 of the 14 patients showing sensitivity to nickel were females. PPD allergy was present in 13% of patients, and 5 of them were using hair dye and also tested positive to their own dye.

Unspecified eczema accounted for 62% of our patients. Most of these patients were men, young adults, and one third were masons handling cement. One third also had atopy. Almost 82% of patients had been in their respective professions for more than 5 years. Potassium dichromate followed by nickel and fragrance were the commonest allergens in this group showing a good relevance to the occupation of the patients as in other Indian studies. [8],[15]

Pompholyx accounted for 14% of our cases of hand eczema which is in concordance with 5-20% found in earlier literature. [7] A highly significant correlation was observed between atopy and pompholyx (P=0.004). Role of atopy in the pathogenesis of pompholyx has been debated. Some studies have found a strong association between the two, while others have failed to do so. [19],[20] Another risk factor implicated for pompholyx is smoking. [21] We did not see any association between pompholyx and smoking; only two of our 14 pompholyx patients were smokers. Patch test analysis of these patients revealed that 11 out of 14 (78.5%) patients had one or more positive patch tests, which is much higher than that reported from previous studies. [22] Nickel was the most common allergen (50%), followed by PPD (28.5%) and fragrance mix (21.4%).

Housewives eczema was present in 10 of 33 women. Indian housewives tend to develop hand eczema at a younger age as compared to those in developed countries. This is mainly because of early and repeated exposure to different household allergens. In our study 70% patients were in the age group 21-40 years in contrast to 42% reported by Calnan et al. [23] Contact sensitivity was present in 60% of patients with housewives eczema, the most common allergens being nickel (30%), followed by potassium dichromate, fragrance mix and chlorocresol (20% each). Vegetables have been considered as common sensitizers in women in India. [24]

Of the 9 patients with hyperkeratotic eczema, 5 were atopic. Statistically there was no positive correlation between atopy and hyperkeratotic hand eczema. Results of patch test in patients of hyperkeratotic eczema have been variably reported in studies, with some showing high rates (up to 56%) and others very low rates. [25],[26] Frequency of contact sensitivity in our patients was comparatively low (30%).

Fingertip eczema was seen in 5 patients. They were either housewives or industrial workers. Contact sensitivity was seen in 60% of these patients. In our study, 62% of patients could not be classified into any morphological type despite examining them carefully. This emphasizes the fact that morphological classification of all patients of hand eczema is not always possible.

An association between contact sensitization and increased eczema severity in patients of hand eczema has been reported previously. [2] In contrast to these findings, we did not find a positive statistical correlation between increased eczema severity and positive patch test reactions (P=0.897). Other important risk factors implicated have been older age, male sex and atopic eczema. [2] None of these positively correlated to eczema severity in our patients (P=0,896, 0.149, and 0.409, respectively). Further there was no increase in HECSI in patients with multiple patch test positivity (P=0.875).