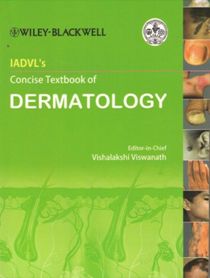 The book covers almost everything that is relevant and could be useful for the medical student and also a practicing physician who has to have a certain degree of practical knowledge and adequate information about common dermatological diseases and their management.

Most of the chapters are well written, but sometimes it is felt that more could have been added to them.

However, there are some minor and few major mis-statements which could cause confusion when the student may like to refer to a bigger text. The chapters in relation to sexually transmitted disease and leprosy have more incorrect statements.

In one chapter, the information is incomplete (other diseases caused by sand flies, mosquito bites, beetles, spiders, ticks, etc.) and in another chapter some important pathogens have been missed out in the text/table, but mentioned in the next table (Papova and Picorna virus).

Some statements are given at places where they do not belong (Reye′s syndrome under the complication of varicella-zoster infection).

Some statements are unnecessary (the disease does not have any racial, sexual, or seasonal preference).

Few words about present status of HIV vaccines should have been included when the subject has been referred to. Post-exposure prophylaxis should also have been added.

Another deficiency is in relation to the wording of the MCQs given at the end of the chapter. Some are worded ambiguously, wrongly and the style of the answers in some situations are indirect and confusing or not in the standard accepted style for clarity. Many chapters have a MCQ, the contents of which are not given in the text, chapters with anyone or many of these deficiencies are (diseases caused by arthropods and parasites, eczemas, photosensitive dermatoses, acne and rosacea, vitiligo and disorders of pigmentation, disorders of hair and nails, connective tissue disorders, cutaneous drug reactions, skin in systemic disease, genodermatoses and nevi, age-related dermatoses, dermatosurgery and lasers, withdrawal of terfenadine from the market) the reasons.

Many statements are confusing and are not exactly correct or open to argument like Highest concentration of melanocytes on face, degree of pain indicating MRSA infection, microscopic examination , n0 on-inclusion of special stains, and missed mention of donovan bodies, candida, gonococci, LD bodies, etc. BI should include globi in BI of 6, a recommendation to treat sexual partners with genital candidal infection, the term spontaneous urticaria, nail pitting in psoriasis due to punctuate porokeratosis; geographic tongue is a variant of psoriasis. Figures given in Figure 9.1 and in the text do not correspond in the disease classification of leprosy. Number of lesions are important but not mentioned; reactions do not indicate the failure of treatment rather indicates the killing of bacteria and clearance of antigen. Monthly dose of rifampicin discolors the sweat and saliva (same reflected in the MCQ about discoloration of sweat, saliva, and tears). Use of terms like genital ulcers and sores to make them look different; syndromes of genital growths, genital swelling mentioned again later in the chapter in key messages, defining late latent syphilis after 2 years in the table and after 1 year in the text, not giving duration of the treatment for doxycycline/tetracycline for late syphilis, associating chancroid with poor hygiene and prostitution, extension of lesions of donovanosis through lymphatics, lymphogranuloma venereum occurring due to unhygienic conditions, sexual promiscuity and low socio-economic statu, only one alternative regime for gonococcal infection with spectinomycin - a drug which is not available, prevention of pregnancy given under obtaining sexual history, mandatory recommendation of presumptive treatment, repeating treatment every 6 months for asymptomatic gonococcal and chlamydial infections.

Pictures of lichen simplex chronicus with well defined borders are like that of inflammatory linear verrucous epidermal nevus, recommending topical steroids for short contact therapy and dithranol use as once or twice daily, carcinogenic properties of coal tar, suggesting treatment with coal tar as a cause for unstable psoriasis (MCQ), reversing the definition of Rowel′s syndrome, drugs causing lichenoid eruptions and not LP, granulomatous inflammation in alopecia areata, vesiculobullous disorders; exclusion of non-infectious causes like pemphigus, epidermolysis bullosa acquista, bullous drug reactions, contact dermatitis, etc., from under the heading of children, lack of clarity about the definition of erythema multiforme, Stevens Johnson syndrome and then the same reflected in the photographs also, recommended treatment of acanthosis nigricans, acrochordons, etc., with topical calcipotriol, salicylic acid, etc., inclusion only of herpes zoster and PHN under infections in the elderly, absorption wavelength of melanin between 700 and 1000 nm given in the table for lasers as 532 and 1064 nm.

Despite all these minor deficiencies, overall the book does have sufficient information, which will be useful to the reader.