Background: Skin tags (ST) are common tumors. They mainly consist of loose fibrous tissue and occur on the neck and major flexures as small, soft, pedunculated protrusions. Decrease in endocrine, hormone level and other factors are thought to play a role in the evolution of ST. Leptin is an adipocyte-derived hormone that acts as a major regulatory hormone for food intake and energy homeostasis. Leptin deficiency or resistance can result in profound obesity and diabetes in humans. A role of mast cell in the pathogenesis of ST is well recognized. Aims: To investigate the role of leptin in the pathogenesis of ST and to clarify whether there is a correlation between mast cell count and leptin level in ST. Methods: Forty-five skin biopsies were taken from 15 patients with ST. From each patient, a biopsy of a large ST (length >4 mm), a small ST (length <2 mm) and a normal skin biopsy (as a control) were taken. The samples were processed for leptin level. Skin biopsies were stained with hematoxylin and eosin and toluidine blue-uranyl nitrate metachromatic method for mast cell count was used. Results: There was a significant increased level of leptin in the ST compared to the normal skin. It was highly significant in small ST than in big ST (P = 0.0001) and it was highly significant in small and big ST compared to controls, P = 0.0001 and P = 0.001, respectively. There was a significant increase in mast cell count in the ST, which did not correlate with the increased levels of leptin. Conclusion: This is the first report to demonstrate that tissue leptin may play a role in the pathogenesis of ST. The significant increase in the levels of leptin and mast cell count in ST may indicate a possible role of adipoimmune in the benign skin growths.
Keywords: Acrochordon, adipoimmune, leptin, mast cell, skin tags

The aim of this study is to investigate the level of leptin hormone in ST in an attempt to elucidate a possible role of leptin in the pathogenesis of ST. Furthermore, this work explores the correlation between leptin levels and mast cell count in the ST.

Fifteen nondiabetic participants seeking advice for their ST were enrolled in this study. This study was conducted in the Dermatology Outpatient Clinic, from August 2008 to December 2008, and was approved by the Dermatology Research Ethics Committee and Faculty of Medicine, Cairo University. All participants were asked to sign an informed consent prior to inclusion in the study. For determining related diseases, the participants were subjected to thorough history taking and clinical examinations like measurement of body mass index (BMI) [Table - 1] using the following equation: [19]

Table 1 :The mean and SD of the age and the BMI of subjects with ST enrolled in the study

From each participant, three skin biopsies were taken as follow: a large ST (length >4 mm), a small ST (length <2 mm) and a normal skin biopsy (as a control). Skin biopsies were stained with hematoxylin and eosin and toluidine blue-uranyl nitrate metachromatic method for mast cell count was used.

Skin biopsies were homogenized using a tissue homogenizer. After cell lysis, the homogenate was centrifuged at 10,000 Χ g for 20 min at 4΀C and the supernatant was stored at -80΀C until performance of the assay.

Measurement of leptin level in ST

The supernatant was examined for leptin using a quantitative sandwich enzyme-linked immunoassay, which was supplied by RayBiotech Inc., Norcross, GA, USA.

The Toluidine blue-stained sections were examined under an Olympus microscope and 10 different fields of each section were counted manually by the same person [Figure - 1] and [Figure - 2]. 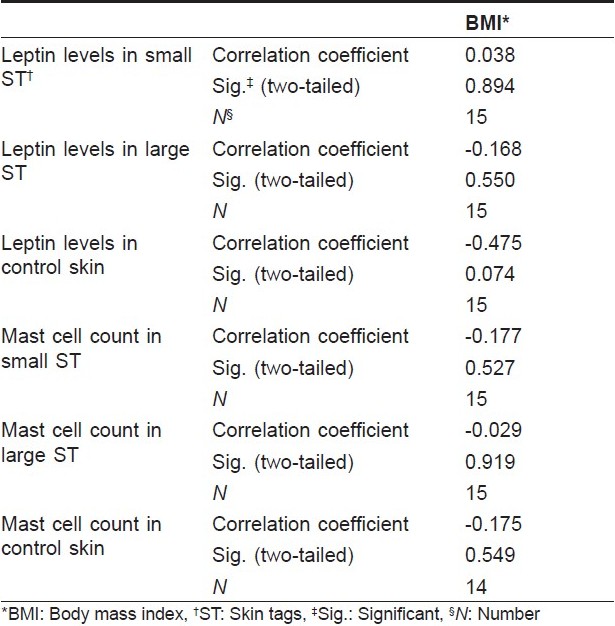 Table 2 :The nonsignificant correlations between leptin level and mast cell count in small ST, large ST and control skin against the BMI

Leptin, a 16-kDa protein, is produced primarily by adipocytes and acts as a major regulator for food intake and energy homeostasis. Leptin deficiency or resistance can result in profound obesity, diabetes and infertility in humans. [15] Since leptin discovery, its biological functions has expanded from anti obesity to broad effects on reproduction, hematopoiesis, angiogenesis, blood pressure, bone mass, lymphoid organ homeostasis and T-lymphocyte system. [16],[17] Leptin is thought to link the nutritional status with neuroendocrine and immune functions, and its role in the modulation of immune response and inflammation has recently become increasingly evident. Leptin orchestrates complex biological effects through its class I cytokine receptor superfamily, expressed both centrally and peripherally. [20]

Skin tags are considered the most common fibrous lesions of the skin. However, they have received little attention in the dermatological literature and, to date, their exact etiology is not fully understood. A relation to obesity, diabetes mellitus, friction, acromegaly, organ transplant, human papilloma virus and other conditions has been reported. [13] However, how these factors may cause the development of ST is not yet clear. In this study, we attempted to measure the level of leptin hormone in tissue of ST to investigate its role in the pathogenesis of these benign lesions. Interestingly, there was a significant increase of leptin levels in ST compared to control skin. Furthermore, leptin hormone levels were found to be significantly higher in small ST compared to large ST. As the ST protrudes out, proliferation of the epidermis together with the core of the dermis occur. Previous studies have shown that leptin acts as an angiogenic factor in the vascular endothelium. [21] Fibroblasts and keratinocytes are also known to express leptin receptors, and the mitogenic effect of leptin on keratinocytes has been recently demonstrated during wound healing by in vivo studies. [22] Furthermore, the role of leptin in the proliferation of both normal and cancer cells has been previously reported. [23] It is therefore plausible that the increased levels of leptin in ST, as shown in this study, through its angiogenic effect and the induction of cellular proliferation, may play an important role in the development of ST. Accordingly, the higher level of tissue leptin found in small ST compared to big ST in our findings may correspond to the increased proliferation potential of early developing small ST compared to the more stable larger lesions. It is important to note that increased levels of leptin have also been reported with obesity, [20] diabetes mellitus [24] and pregnancy, [25] all of which have been linked with the development of ST. Taken together, these findings may indicate a novel role of leptin hormone in the evolution of ST. Plasma leptin level was reported to correlate strongly with BMI; [25] yet, in this study, we demonstrated that tissue leptin may not correlate with BMI. It was reported that plasma leptin level correlates with the number of adipose tissue mast cells in patients with metabolic syndrome. [26],[27] Furthermore, a possible role of mast cells in the pathogenesis of ST was previously demonstrated by investigators from our group. [13] In this work, mast cell count/HPF cell were significantly increased in ST when compared to normal controls. However, this increase did not significantly correlate with increased tissue leptin levels. Nevertheless, the possible stimulatory action of tissue leptin on mast cell growth requires further investigation, especially because mast cells were recently shown to express leptin receptors. [28]

We are indebted to Prof. Magdy Ibrahim, MD, Professor of Statistical Unit, Faculty of Medicine, Cairo University, for his statistical analysis of this work.