Spindle cell and pleomorphic lipoma represent the same lipoma entity. The lipoma usually arises from the subcutis and rarely localizes in the dermis, leading to misdiagnosis. We found only five papers published in English literature that has addressed this exceedingly rare benign lipogenic tumor.[1],[2],[3],[4],[5]

A 60-year-old man presented with a 1-year history of a lump on the right lateral aspect of his nose. There was no history of trauma or previous skin diseases. Family and personal history were unremarkable. Physical examination revealed a red-colored, soft, well-demarcated papule 5 mm in diameter on the right lateral aspect of the nose [Figure - 1]. The regional lymph nodes were not palpable. The lesion was removed with excision biopsy under local anesthesia.

Histological examination revealed a circumscribed dermal neoplasm without any capsule [Figure - 2], which was filled with abundant mature adipose tissue in the central area and ovoid spindle cells confined to the peritumoral margin [Figure 3a]. The lipomatous area was consisted of many mature adipocyte cells, and some small mono-, bi-, or multivacuolated lipoblasts with atypical nuclei. In addition, floret-like bizarre and multinucleated giant cells were intermingled with the spindle-celled and adipocytic components [Figure 3b]. Immunohistochemical studies demonstrated that spindle-shaped cells were positive for CD34 [Figure - 4] and were negative for S100 protein. Diagnosis of intradermal spindle cell and pleomorphic lipoma was made; continuous follow-up of the patient for 12 months revealed no recurrence.

Cutaneous spindle cell and pleomorphic lipoma is an extraordinarily rare benign adipose tissue tumor, representing approximately 9.8% of all spindle cell lipomas and 1% of tumors with adipocytic differentiation.[1] There have been a total of 38 cases reported in the literature [1],[2],[3],[4],[5] since it was initially described by Nigro in 1987.[3] The tumor has shown a predilection for males, and has occurred over a wide range of ages (from 20 to 85 years) with a mean age of 42 years.[1] It usually presents as a slow-growing cutaneous nodule measuring less than 2.5 cm.[1] The presenting symptoms and clinical signs of our patient were similar to previously described cases. It can occur in the head/neck region, trunk, breast, thigh, buttock, ear, lower limbs, upper limbs, and the genital region.[2] Grossly, intradermal spindle cell and pleomorphic lipomas are ill defined and often unencapsulated. Microscopically, it is characterized by the presence of pleomorphic, bizarre, spindle cells, and floret-type giant cells. Among the 38 cases reported, 15 cases merely consisted of a spindle cell component. One report of pure cutaneous pleomorphic lipoma localized to the nasolabial region of 59-year-old man is there in the literature.[1],[2],[3],[4],[5] Among the reported cases, only one patient, a 71-year- old male, developed local recurrence at the site of a previous excision 21 years later. Complete gross excision with complete histopathologic margin evaluation achieves an almost complete cure rate. No case with metastasis or disease-related death has been reported.

Differential diagnosis is extensive and includes both benign and malignant soft tissue tumors, especially well-differentiated spindle cell liposarcoma [Table - 1]. Clinically, well-differentiated spindle cell liposarcoma presents with a locally aggressive growth and may recur, whereas metastases do not occur.[9] Histologically, the spindle cells contain slightly enlarged, fusiform nuclei that are sometimes hyperchromatic and irregularly shaped. These are set in a collagenous stroma that may show hyalinization or myxoid changes. Immunohistochemically, an expression of CD34 by the spindle cells has been reported in many cases and lacks amplification of MDM2 and/or CDK4 in most of the cases analyzed. For curative therapy of liposarcoma, surgical excision remains the mainstay of management. A wide surgical margin is important to prevent local recurrence with or without additional postoperative radiotherapy and/or chemotherapy. Well-differentiated liposarcoma rarely develop distant metastasis but often recur locally. Spindle cell/pleomorphic lipoma generally presents as a solitary, soft, and slowly enlarging mass, with a variable size measuring 1–13 cm.[10] This is a type of benign lipogenic tumor composed of primitive CD34-positive spindle cells, floret-like multinucleated giant cells, and mature adipocytes.[2] Cytogenetically, most spindle cell/pleomorphic lipomas show 16q or 13q abnormalities.[11] The treatment of choice is complete local excision, and recurrence is extremely rare. In our case, the lesion lasted for one year without aggressive and invasive growth. Histologically, there were no atypical lipogenic cells. Spindle-shaped neoplastic cells were characterized by slightly enlarged, fusiform nuclei that were sometimes hyperchromatic and irregularly shaped. The patient was discharged and has remained disease free for a follow-up period of 8 months. Thus, a diagnosis of intradermal spindle cell/pleomorphic lipoma was made. Other disorders that may be misdiagnosed includes solitary fibrous tumor, cutaneous neurofibroma, cutaneous angiomyolipomas, and lipoblastoma [Table - 2]. 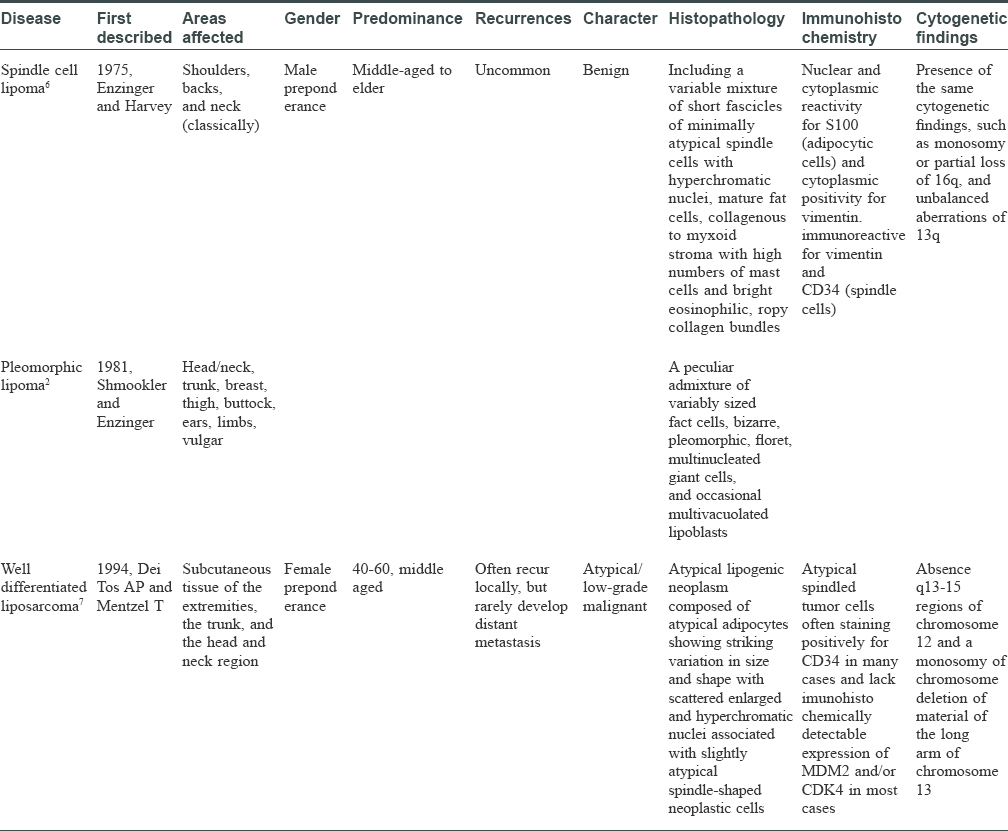 Microscopically, in contrast to a majority of reported cases, our case was well circumscribed and entirely intradermal. Therefore, this case represents the 39th report of intradermal spindle cell and pleomorphic lipoma in the English literature.

S-100 is usually positive in adipocytes of spindle cell lipoma. In our case, S-100 was positive in fat cells and negative in spindle-shaped cells.

This study was supported by Medical Scientific Research Project of Chongqing Municipal Health Bureau (Grant no. 20141015) and the Natural Science Foundation of Chongqing (Grant no. cstc2016jcyjA0179).

The authors certify that they have obtained all appropriate patient consent forms. In the form the patient has given his consent for his images and other clinical information to be reported in the journal. The patients understand that their names and initials will not be published and due efforts will be made to conceal their identity, but anonymity cannot be guaranteed.

This study was supported by Medical Scientific Research Project of Chongqing Municipal Health Bureau (Grant no. 20141015) and the Natural Science Foundation of Chongqing (Grant no. cstc2016jcyjA0179).

There are no conflicts of interest.[13]