Psoriasis is one of the most common causes of nail dystrophy. Reported nail involvement in psoriasis varies from 32% to 74% of cases in various Indian studies.[1],[2] Psoriasis of the fingernails constitutes a significant social problem.[3]

Intramatricial corticosteroid injections have been used for many years in nail psoriasis with good results, the steroid of choice being triamcinolone acetonide. Methotrexate as intra-articular injections has been widely used in psoriatic arthritis in doses of 10–20 mg/dose. We found only one report of the use of intralesional methotrexate in a patient with nail psoriasis.[4] Intramatricial cyclosporine has not previously been tried in nail psoriasis, though intralesional cyclosporine (17 mg/ml) yielded significant improvements in chronic plaque psoriasis in double-blind, vehicle-controlled studies, suggesting that cyclosporine is capable of exerting beneficial effects by a local mechanism.[5] Most patients continued to show improvements in the injected cutaneous psoriatic lesions for 4 weeks after intralesional cyclosporine therapy had ended, without significant local or systemic toxic reactions. Taking these factors into account, we took up a trial to comparatively evaluate the therapeutic efficacies of intramatricial injections of triamcinolone acetonide, methotrexate and cyclosporine.

Our study was carried out at GGS Medical College, Faridkot. The study protocol was approved by the institutional Ethical Committee. Written informed consent was obtained from all participants.

Patients having at least three affected fingernails with or without concomitant skin lesions who had not been on any systemic and topical antipsoriatic medications for at least the past 3 months were enrolled. Children below 10 years, pregnant women, immunocompromised patient, hypertensive and diabetic patients were excluded from the study. In each patient, all the three drugs were injected in different nails, and thus, multiples of three nails were included in the study in each patient. Thus, out of the selected 17 patients, 3, 6 and 9 nails per patient were injected in 5, 11 and 1 patient(s), respectively, making up a total of ninety fingernails injected. Thirty nails each were treated with intramatricial injections of triamcinolone acetonide (10 mg/ml), methotrexate (25 mg/ml) and cyclosporine (50 mg/ml). Hemogram, LFT, RFT, Electolytes were done before 1st and after 2nd injection and at each follow up.

With aseptic precautions, the digit was cleaned and draped in a sterilized sheet. Digital nerve blocks with plain lignocaine (2%) were administered in the web spaces on either side of the digit. An insulin syringe was used for the intramatricial injection. The needle was inserted from the lateral angle of the proximal nail fold into the proximal nail matrix, entry into which indicated by a loss of resistance. A volume of 0.05 ml was injected from each lateral angle, forming a 'V' [Figure - 1]. Immediate blanching of the lunula [Figure - 2] indicated that the injection was being given correctly into the proximal nail matrix. Yellowish discoloration of the lunula was seen immediately after an intramatricial injection of methotrexate. This is because of the yellow colour of the injection. Oral serratiopeptidase (20 mg) twice daily was prescribed for 3 days in patients who complained of pain. All patients were advised to clean the treated digits twice daily with povidone-iodine lotion.

Two injections were administered into each treated nail, with an interval of 6 weeks. 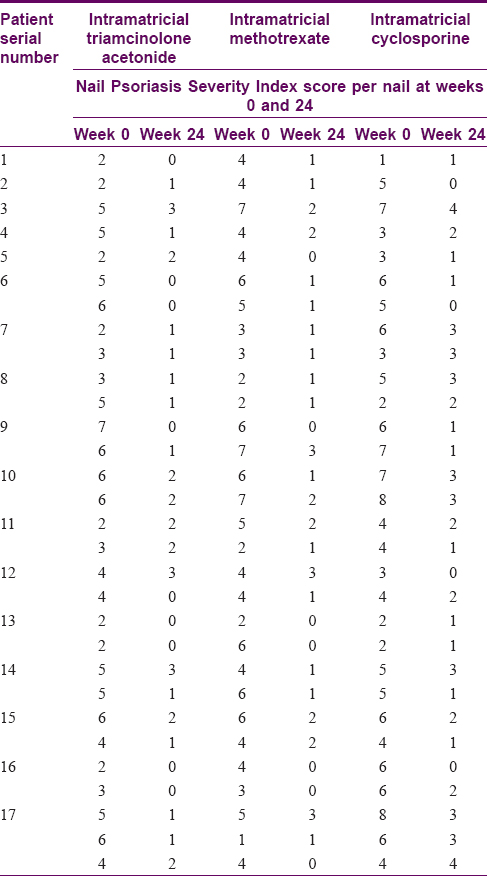 This study was started with 20 patients. 3 were lost to follow up. In the patients who completed the follow ups, 90 fingernails in 17 patients were treated. 9 out of 17 patients were in the age group of 31–50 years(53%). Male-to-female ratio was 3.5:1. The duration of nail psoriasis varied from 1 year to 20 years. The mean duration was 7 years. The number of fingernails affected varied from three in 39% of cases to all ten nails in 6% of the patients. The total Nail Psoriasis Severity Index scores ranged from 7 to 43. The mean overall NAPSI score per nail was 4.4. Mean NAPSI score per nail in the groups triamcinolone, methotrexate and cyclosporine was 4.06, 4.33 and 4.83 respectively. There was no significant difference in the three groups at baseline.

At the first follow-up at 12 weeks, none of the nails in any of the three groups showed G3 or G4 improvement [Table - 2].

Fifteen (50%) of the 30 nails treated with triamcinolone acetonide (10 mg/ml) showed G3 to G4 improvement by the fourth follow-up at 24 weeks [Figure - 3] and [Figure - 4], [Table - 3]. Eleven nails out of these thirty showed some side effects, most commonly postinjection numbness in fingers (five nails). This was a short-term side effect lasting for a maximum 24 h after injection. Subungual drug deposition was seen in two nails injected with triamcinolone acetonide, due to the deposition of the powder form of the drug in the nail matrix Figure 4] - left]. Pain on intramatricial injection was noted in only two nails, and subungual hematoma Figure 4] - right] and acute paronychia in one nail each in this group.

In the methotrexate group, 17 (56.7%) nails showed G3 and G4 improvement at 24 weeks [Figure - 5]. This was slightly better than with triamcinolone acetonide, but the difference was not statistically significant (P = 0.627). Of the three treatment groups, intramatricial methotrexate was associated with the lowest frequency (7/30) of side effects. Of these, six were instances of transient postinjection numbness, as with injection triamcinolone. Pain on intramatricial injection occurred only in one nail in this group.

In the cyclosporine group, 10 (33.3%) nails showed G3 and G4 improvement at 24 weeks [Table - 3]. Most (11, 36.7%) of the nails in this group showed only G2 improvement at 24 weeks. In addition, intramatricial cyclosporine injection was associated with the most side effects (28 out of 30 treated nails). Severe pain despite ring block anesthesia was reported in 27 nails while receiving cyclosporine injections. Out of these, pain was severe and lasted for a few hours in about 50% of cases and was persistent for a few days in 8 nails. Postinjection numbness of fingers was seen in 13 nails in this group. Side effects such as proximal onycholysis,(1 nail) and splitting (1 nail) and distortion of the nail plate (2 nails) [Figure - 6], though rare, were seen exclusively with this drug.

No statistically significant differences were found between the three groups at any of the follow-up visits. No systemic complication was noted in any of the patients in our study, and none of the patients developed hypopigmentation or atrophy of the treated nail folds.

Morphological features in psoriatic nails include nail plate signs as a result of nail matrix involvement, and nail bed signs (above). Other findings such as trachyonychia and paronychia may be seen. The most common finding is pitting in fingernails and subungual hyperkeratosis in toenails.[6]

A wide range of topical and systemic modalities have been used for treating psoriatic nails, but response is often not satisfactory. Hence, nail psoriasis remains a therapeutic challenge. One of the aims in treating nail disorders is to make the drug available to the nail matrix in an effective concentration. Systemic drugs have to be given in high doses which may result in toxicity and they still may not effectively reach the nail matrix. Topical therapies for nail psoriasis have their own drawbacks, including the potential for local atrophy of the skin and bone, the need for prolonged occlusion and repeated applications, and limited efficacy due to low permeability of the nail plate. Delivering the drug directly into the nail matrix by intramatricial injection therefore seems an attractive option. Only two injections were given per nail at 6- weeks interval. This was done to decrease side effects such as injection side atrophy, disappearance of the phalanx under injection and tendon rupture reported with weekly injections of intralesional triamcinolone. No systemic side effects of intralesional injections have been reported in earlier studies.[4]

Intramatricial injection therapy is a safe, economical, simple and effective modality in the management of nail psoriasis. Pain, the most common side effect, was transient with injections of methotrexate and triamcinolone in our study, but with cyclosporine injections, pain was severe and lasted for a few hours in about 50% of nails and for 2-3 days in 8 nails injected with cyclosporine.

In our study, though the differences in the efficacies of intramatricial triamcinolone acetonide, methotrexate and cyclosporine were not statistically significant, methotrexate yielded the best results with the maximum number of nails showing complete recovery (G4 improvement). It was also the drug most accepted by patients, with the lowest frequency of side effects. Saricaoglu et al. also reported successful use of intralesional methotrexate in a single psoriatic fingernail with no recurrence during a 2-year follow-up period, and no adverse effects.[4] In our study, the results with intramatricial methotrexate were comparable to those with intramatricial triamcinolone acetonide. On the other hand, nails treated with intramatricial cyclosporine demonstrated the maximum number of side effects, including severe pain which can decrease patient compliance. Moreover, the higher response grades (G3 and G4) occurred in fewer nails in this group.

There were certain limitations in our study. It was open-labeled, and the number of patients was small. The limited follow-up of 6 months is not adequate to assess the frequency of relapse of nail psoriasis. Selection bias may also have occurred since there was no randomization. Some improvement in each nail could be due to systemic effects of all drugs, since each patient received all the three drugs. The lack of a placebo/ no- treatment arm can also be considered a limitation since psoriasis of nails can improve spontaneously over 6 months.

Keeping in mind its low cost, fewer treatment visits and minimal side effects, intramatricial therapy is a promising option in nail psoriasis. It may also be useful in other nail dystrophies. This is the first study comparing efficacy of intramatricial triamcinolone, methotrexate and cyclosporine in psoriatic fingernails. Larger multicentric, randomized controlled studies with longer follow-up are required to confirm the results of our study.