Iontophoresis is the process of increasing the penetration of drugs into the skin by application of an electric current. The drug is applied under an electrode of the same charge as the drug, and a return electrode opposite in charge to the drug is placed at a neutral site on the body surface. Electrical energy assists the movement of ions across the skin using the principle "like charges repel each other and opposite charges attract". In this article, we discuss the mechanism, principles, factors influencing iontophoresis and its application for various dermatological conditions. 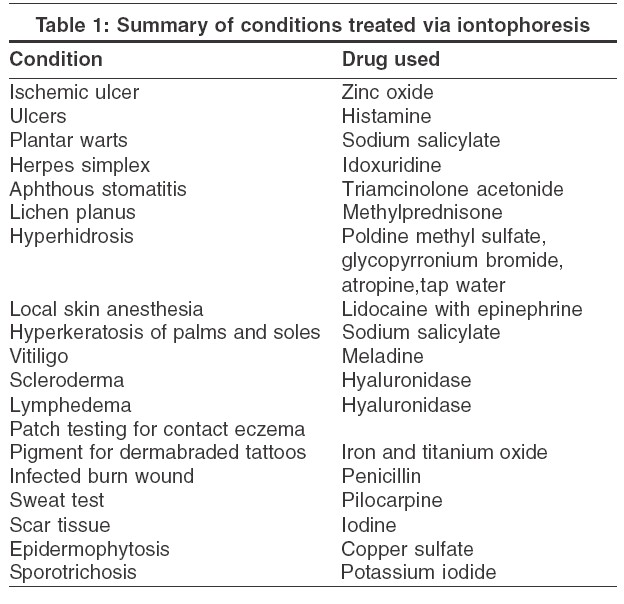 Trans-dermal administration of drug is assuming an important place in modern drug therapy. It is used for non-ionized drugs required in a small dosage. Trans-dermal administration can be passive or facilitated. In passive administration, the non-ionized drug traverses the skin through the stratum corneum. The skin, being a semi-permeable membrane, allows only a small amount of any drug molecule to passively penetrate the skin.[1] Ionized drugs do not easily penetrate this barrier and are not suitable for routine trans-dermal delivery unless an external source of energy is provided to drive the drug across the skin. Facilitated diffusion can utilize either ultrasound (phonophoresis) or electrical (iontophoresis) energy. In iontophoresis, this external source of energy is in the form of an applied direct electrical current.

Iontophoresis increases the penetration of electrically charged drugs into surface tissues by the application of an electric current.[2] Electrical energy assists the movement of ions across the stratum corneum according to the basic electrical principle of "like charges repel each other and opposite charges attract".

The drug is applied under an electrode of the same charge as the drug, and a return electrode opposite in charge to the drug is placed at a neutral site on the body surface. The operator then selects a current below the level of the patient′s pain threshold and allows it to flow for an appropriate length of time. The electrical current significantly increases the penetration of the drug into surface tissues by repulsion of like charges and attraction of opposite charges. The two classically considered prerequisites for iontophoretic treatment are that the drug must be charged (or modified to carry a charge) and that the disease process must be at or near a body surface.

A typical iontophoresis device consists of DC voltage delivery system and electrodes. Wires are then connected between the unit and the active and passive electrodes, and the unit set for current and time [Figure - 1]. In the iontophoresis process, the current, beginning at the device, is transferred from the electrode through the ionized drug solution as ionic flow. The drug ions are moved to the skin where the repulsion continues moving the drug through the trans-appendageal structures and stratum corneum interstices via the aqueous pores.[3] The larger the electrode surface, the greater the current the device must supply to provide a current density for moving the drug.

Iontophoresis enhances transdermal drug delivery by three mechanisms: (a) ion-electric field interaction provides an additional force that drives ions through the skin, (b) the flow of electric current increases the permeability of the skin, and (c) electro-osmosis produces bulk motion of solvent that carries ions or neutral species with the solvent stream. Electro-osmotic flow occurs in a variety of membranes and is in the same direction as the flow of counter-ions. It may assist or hinder drug transport. Since human skin is negatively charged above pH 4, counter ions are positive ions and electro-osmotic flow occurs from anode to cathode. Thus, anodic delivery is assisted by electro-osmosis but cathodic delivery is retarded. Because of the electro-osmotic flow, transdermal delivery of a large anion (negatively charged protein) from the anode compartment is more effective than that from the cathode compartment.[4]

Iontophoretic devices may be powered by electricity, batteries or by rechargeable power sources. The machines available in India are electric operated. Battery operated units are Drionicγ, Phoresorγ, etc. A Phoreserγ device consists of a microprocessor-controlled battery powered DC current, drug reservoir and electrodes. The batteries are most commonly 9 volt ones. The drug reservoir consists of a gauze/cloth or gel pad to which the solution is applied or the solution is injected through a port into the reservoir electrode combination. Wires are connected between the microprocessor unit and the active and passive electrodes. Iomed iontophoretic drug delivery electrodes are available and are composed of hydrogel material that is hydrated before use to deliver local anesthesia.

The application of an electric current across the skin is used to extract a substance of interest from within or beneath the skin to the surface for testing. In vivo and in vitro methods have shown that the approach can be used to monitor the subdermal concentration variation of glucose and provide a non-invasive technique by which a diabetic can monitor the fluctuation of blood sugar.[5]

Iontophoresis provides for controlled delivery rates (through variations of current density, pulsed voltage, drug concentration and ionic strength). It eliminates gastrointestinal incompatibility, erratic absorption, and first pass metabolism. It reduces side effects and avoids the risks of infection, inflammation, and fibrosis associated with continuous injection or infusion since it is non-invasive. It enhances patient compliance with a convenient and non-invasive therapeutic regimen, and decreased dosing frequency. It improves efficacy by continuous release and decreases the total dose and dosing frequency.

There is a possibility of burns if the electrodes are improperly used. The formation of undesirable vesicles and bullae in skin being treated can be avoided by periodically interrupting a unidirectional treatment current with a relatively short pulse of current in the opposite direction.

Variables affecting the iontophoresis include aspects of the current, the physicochemical properties of the drug, formulation factors, biological factors and electro-endo-osmotic flow.

These include the charge, size, structure and lipophilicity of the drug. The drug should be water soluble, low-dose and ionizable with a high charge density. Smaller molecules are more mobile but large molecules are also iontophoresable.

These include the drug concentration, pH, ionic strength, and viscosity.

2. Ionic strength: If buffer ions are included, they compete with the drug for the delivery, decreasing the quantity of drug delivered, especially since buffer ions are generally smaller and more mobile than the larger active drug.

3. pH: The pH of the solution can be adjusted and maintained by larger molecules, such as ethanolamine: ethanolamine hydrochloride rather than the smaller hydrochloric acid and sodium hydroxide. An increase in ionic strength of the system will also increase the competition for the available current, especially since the active drugs are generally potent and present in a smaller concentration than these extraneous ions.

4. Viscosity: The migration of the drug is inversely related to the viscosity.

These factors involve the skin to which the electrodes are applied; its thickness, permeability, presence of pores, etc. Sweat glands are the most significant path for the conduction of charges into the skin. This was demonstrated by Papa and Kligman, when methylene blue introduced into the skin via iontophoresis entered sweat glands in a punctuate pattern and outlined the sweat pores.[7]

Drugs can also be transported via electro-endo-osmosis. When a current is applied, there is also a flow of water from the electrode reservoir into the skin. Any drug in solution, ionized or non-ionized, can follow the water flow into the skin. In this manner, some drugs that are not ionized can also be given iontophoretically. If only the non-ionized drug is to be given, it may be necessary to add a small quantity of sodium chloride to the solution for conductivity and to establish electro-endo-osmotic flow.

Iontophoresis has been used for the treatment of various dermatologic conditions [Table - 1]. The majority of published studies are either uncontrolled series or anecdotal observations. Earlier, simple ions and heavy metals were the most frequently used drugs, but over the last 30 years interest has shifted toward the use of iontophoresis as a drug delivery system for a wide variety of medications, ranging from steroids to antibiotics to local anesthetics.

Ulcers Iontophoresis has been used for the treatment of patients with ischemic leg ulcers. The effect of histamine iontophoresis on ulcers was studied by Abramson et al.[8] Complete healing was reported in four of the five patients.[8] Cornwell reported a patient with ischemic ulcer who responded to iontophoresis with solution of zinc oxide.[9]

Fungal infection There are reports of the successful treatment of dermatophytosis with the use of copper sulfate iontophoresis[10] and of sporotrichosis with potassium iodide iontophoresis.[11]

Warts: There is a report of the successful treatment of plantar warts with sodium salicylate iontophoresis.[12]

Lichen planus In an uncontrolled series, Gangarosa reported iontophoresis with methyl prednisolone for erosive lichen planus, which healed with fibrosis.[15]

Hyperhidrosis The most successful application of iontophoresis is for the treatment of hyperhidrosis. The basis for such treatment and its practical aspects have been well described.[16],[17],[18] Currently, the most commonly used conducting medium is tap water because it is safe and effective.[19] Anticholinergic compounds (e.g. poldine methyl sulfate,[20] glycopyrronium bromide,[21] and atropine[22]) have a longer lasting effect than water, but the side effects of systemic anticholinergic blockade have prevented their wide acceptance.

The efficacy and safety of tap water iontophoresis is well documented, but its mechanism of action remains unknown. The most widely accepted hypothesis is that sweating is inhibited by mechanical blockage of the sweat ducts at the stratum corneum level, the depth and severity of the damage being dose-related.[23] Stripping off the stratum corneum relieves the blockage and restores sweating.[24] More recent work by Hill et al casts doubt on this theory.[25] They examined, by light and electron microscopy, sweat glands from the palm of a patient with hyperhidrosis before and after treatment and found no changes.[25]

Hyperkeratosis with fissuring of palms and soles: Iontophoresis with 5-10% aqueous solution of sodium salicylate showed improvement within a period of 3-4 weeks (6-8 sittings of 10-15 minutes each).[29]

Vitiligo: In an uncontrolled study, iontophoresis with meladine solution 1% in patients with vitiligo showed marked repigmentation.[30]

Lymphedema: Iontophoresis with hyaluronidase has also been successfully used in the treatment of lymphedema of the limbs.[32]

Patch testing: Wahlberg reported encouraging results with the use of iontophoresis as a complement to ordinary patch testing in the investigation of obscure cases of contact eczema.[33] With iontophoresis, the test substances are administered rapidly and they migrate through the epidermis down into the dermis. Additionally, the disadvantages of the traditional patch test procedure, such as prolonged wearing of the test strips, are eliminated.[33]

Sweat test: Iontophoresis was also used for the diagnosis of cystic fibrosis by the sweat test. Iontophoresis with pilocarpine causes rapid sweating for minutes.[34]

Other applications of iontophoresis include introduction of "artificial skin pigment" (iron oxide and titanium oxide) into the skin,[35] iodine iontophoresis to reduce scar tissue,[36] and administration of antibiotics (penicillin) in burn patients.[37]

Iontophoresis has been explored for many dermatologic and other medical conditions with reports of considerable success. In many conditions, however, these explorations have been limited to a single clinical trial. More rigorous studies are needed to investigate the applications of this mode of therapy.