Kerala continues to be less prevalent for human immunodeficiency virus (HIV) infection (0.19%) in spite of the high level of migration from the neighboring high prevalent states. [1],[2] Only one study has so far evaluated the risk factors for acquiring HIV in Kerala and reasons for the low prevalence. [2] We carried out a study to evaluate the role of migration and other risk factors for acquiring HIV infection among the individuals attending the anti-retroviral treatment (ART) center of Government Medical College, Thrissur.

From 3452 PLHA (people living with HIV/AIDS) registered patients, 260 Malayalees were selected by simple random sampling for a detailed interview. Partners of selected participants and those who are not fit physically or mentally to attend an interview were excluded from the study.

The study was approved by the Institutional Review Board and representatives of the local network of PLHAs.

The following details were elicited at the interview: age, sex, place, education, employment, marital status, and HIV status of spouse, details of migration, and the possible risk factors for acquiring HIV infection as perceived by the participant.

The question addressing possible route of infection had various options [Table - 1]. History of migration was also elicited. We could not elicit the past history of condom use reliably especially that of the exposures occurred long back in the clinic setting and these data were not studied. Among the 260 respondents, 126 (48.4%) were migrants;116 (44.6%) men and 10 (3.8%) women). A total of 64 (25%) respondents had a migrant spouse. 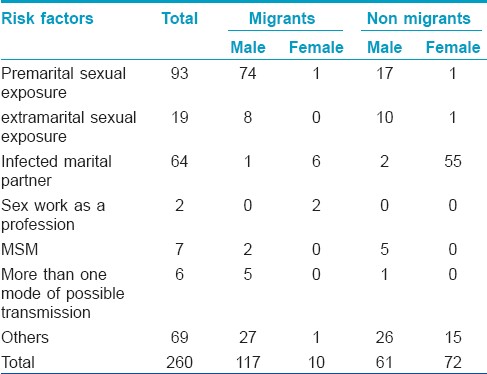 Thirty-two (12%) were having/had a job which demanded frequent traveling, majority being drivers. A total of 56 out of 82 (68%) women had a migrant spouse. Thus actual number of respondents related to migration directly or indirectly was 165 (63%).

This study shows a great majority of HIV infections among Keralites occurred in migrants and probably through premarital sex with commercial sex workers. Extramarital sexual exposure was relatively less among the respondents. The second commonest risk factor (the most important among women) was marriage to an infected partner [Table - 1]. The presence of migrant spouse was significantly associated with female sex (OR 69.27, 95% CI 26.98-177.85) in comparison with males. Our study documents for the first time that migration is strongly associated with premarital sexual exposure (OR 10, 95% CI 5.5--18.6, P 0.00), among the HIV positive respondents of central Kerala [Table - 1]. In this study, the majority of the females were married at least once and denied any other risk factors associated with their HIV acquisition. Similar to an earlier study which illustrated marriage as a factor that increases the likelihood of HIV infection among the females, [3] this study also indicates that the major risk factor among women in central Kerala is infection from a marital partner. Unfortunately there are no specific prevention strategies which address this mode of transmission.

The low level of extramarital sexual exposures among the nonimmigrant respondents probably explains why Kerala remains less prevalent for HIV. Possibly the low frequency of extramarital/high-risk sex and absence of multiple concurrent sexual partners kept the epidemic within the bridge population and their spouses.

We believe, this study calls for a renewed prevention strategy in Kerala. Probably the absence of such strategy lead to the suggestion for introducing premarital mandatory HIV testing in the state. Such a strategy should aim at the unmarried young prospective migrants and migrants from Kerala living outside. It also suggests the need for awareness programs addressing the premarital youth of Kerala. The possible limitations of this study are bias in selecting patients who attended the ART clinic only and that many who were infected recently were not included in the study. It is possible that reluctance of atleast some of the respondents to divulge some personal information would have occurred in this study. Also this study did n′t look into other factors which may have probably contributed to the low number of HIV-positive patients in Kerala which includes the impact of prevention strategies at various levels.