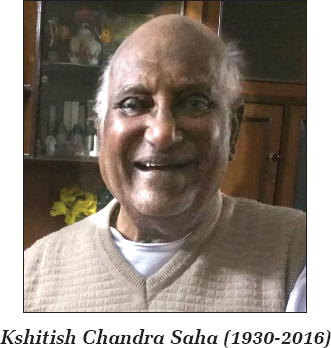 Kshitish Chandra Saha, dermatologist, educator and philanthropist left us on June 3, 2016. He lived a colorful life of 86 years.

He was born on January 1, 1930 at Mirpur, Dhaka, Bangladesh. He left Bangladesh and received his higher education in medicine in Kolkata, West Bengal.

Dr. K. C. Saha, MBBS, DTM and H, D. Dermat, MD (Medicine) was a brilliant medical student. He secured the highest score in Medicine and Pathology and stood first in MD. He served the West Bengal Health Services for 30 years (1957–1987) and retired as the Professor and Head of the department of dermatology, the Calcutta School of Tropical Medicine.

He had vast clinical experience, an unquenchable thirst for medical knowledge and a passion for teaching.

He brought to the light the problem of arsenicosis (arsenical dermatitis due to intake of arsenic-contaminated tube-well water) in West Bengal in 1982 and in Bangladesh in 1984 which emerged as a serious public health hazard. He thoroughly investigated the clinical and epidemiological aspects of arsenicosis through a project granted to him by the Indian Council of Medical Research and submitted his valuable recommendations to the authorities. As an expert on arsenicosis, he was invited to deliver lectures in many premier universities of the USA, such as the Johns Hopkins University, Yale University, the University of California, Berkeley and Columbia University.

He attended many national and international conferences on dermatology and delivered invited talks in San Diego (USA) and Canada.

He was interested in the study of dermatoglyphics (the study of the ridges of the skin of the fingers, palms, toes and soles) in normal Bengali population and in relation to different diseases such as diabetes, leprosy and ichthyosis.

He published more than 100 articles on medicine and dermatology in national and international journals including Nature in 1999.

He was the author of a book on dermatology, entitled “Skin Diseases for Students and Practitioners,” a product of his vast experience in clinical dermatology.

He was also the author of many books in Bengali on medical and various other subjects.

He was a student-friendly teacher and a patient-friendly physician. He was well aware of his social commitments and was associated with many charitable organizations throughout West Bengal. He used to visit those organizations regularly to serve patients, even some months before his final illness. Besides his professional field, he was also a musician, lyricist, composer, playwright and actor. He was an approved lyricist of All India Radio. He published articles and books in Bengali and produced compact discs as well as video cassettes on devotional music as well as other musical fields.

He has left behind him his wife, one son and one daughter and numerous admirers.

A polite gentleman, quiet in disposition, always with a smiling face and helping attitude, Dr. K. C. Saha will be remembered forever.